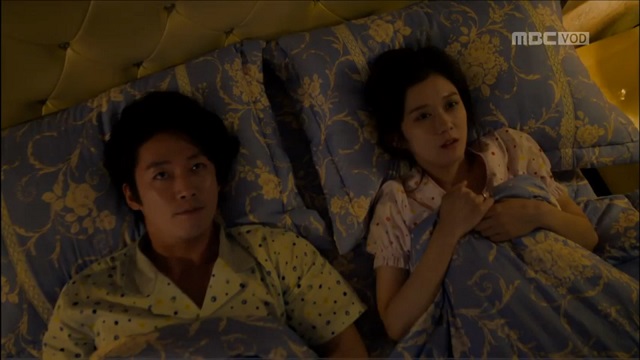 This is not awkward at all.

Side dish: The gigantic cake that Gun munches on during this episode reminded me of the standard Chinese birthday cake: fruit and whipped cream on top, and fluffy white cake on the inside. My Edible Memories managed to track down the recipe, and sure enough, there is a Korean version of the same cake: a Korean Ssaeng Cream Cake. I never liked this style of cake, but perhaps it will be better homemade.

After discovering that her husband Lee Gun (Jang Hyuk) sold her hometown to an industrial dump developer, Kim Mi Young (Jang Na Ra) finds out that Daniel (Choi Jin Hyuk), the priest that she has been confiding in, is not actually a priest. Mi Young angrily walks away from both Gun and Daniel without a word.

Oblivious to the change in Mi Young’s demeanor, Gun brings home a cake for her only to catch Mi Young as she is moving out. Gun accuses her of acting shamefully in public by hanging out with and hugging Daniel. Mi Young leaves, thinking resentfully of Gun acting nice to her face then selling her hometown behind her back.

Mi Young passes Daniel’s café, and is won over by his apology on the newly installed ticker tape sign. She learns of his long lost sister who shares the same name as her. Daniel gives Mi Young brotherly advice that she should return to Gun, who is probably worrying about her. 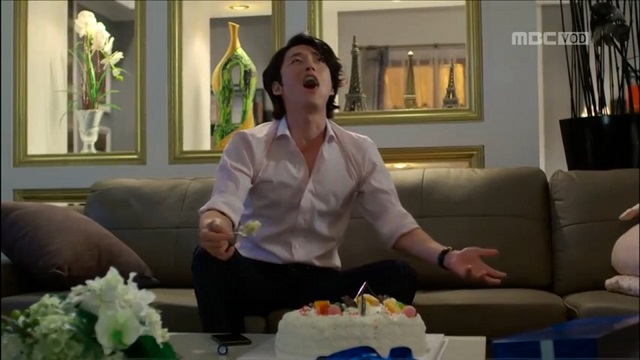 Alone in his apartment, Gun is frantically eating the cake and exercising while waiting for Mi Young to call. He runs across her just as she reaches the front door. Mi Young thanks Gun for worrying about her and remembers that he told her to have pride in herself. She wants to acknowledge at least that much though she remains angry at him.

It turns out that Gun’s job is on the line in the aftermath of the steep penalty the company paid for dissolving the sale of Mi Young’s hometown factory. Fortunately, Gun will secure a collaboration with a top designer, which should sales bring up. Gun is horrified to learn that the designer is Daniel. He accuses Daniel of taking the job for his wife, and Daniel freely admits to this. Let the games begin!

Mi Young’s sister, Mi Ja, and brother-in-law come for a visit, causing Mi Young and Gun go berserk trying to hide all signs of their separate sleeping arrangement. Gun is ready to join his in-laws on a ferry boat double date when Mi Young abruptly excuses him, claiming he is busy.

Gun shows up on the ferry anyway, and Mi Young finally questions Gun about the sale of her hometown, which the in-laws overhear. While attacking Gun, Mi Ja goes into labour. Gun gets back into his in-laws’ good books by delivering the baby, building a community centre for their town, and revealing that the sale their hometown did not go through. 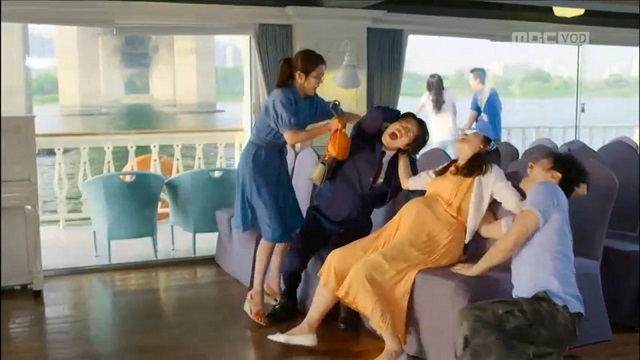 Back home, Gun forces Mi Young to switch sleeping arrangements with him, reads a book to the fetus, and reiterates the idea that she is not a post-it note, but superglue. After a bad night on the sofa, Gun talks his way into sharing the bed with Mi Young, claiming that they will sleep together like objects. When Gun and Mi Young turn into objects with rapidly beating hearts, Mi Young attempts to leave, and Gun pulls her back into bed and into his arms. Be still, my heart!

Only 만: I was pleased to see the return of the insane laugh in this more subdued episode.

Junggugeo Kaenada 중국어 캐나다: Did the laugh ever really disappear?! Whatever. Gun remains insane. His character is beginning to remind me of Cheon Song Yi of “My Love From the Stars” in that they are both crazy entertaining solo acts.

만: Except he doesn’t seem to drink, so there’s one difference, at least. He reminds me a lot of Cheon Song Yi; one moment completely nuts, and another moment surprisingly soft-hearted. Gun may be insane, but he’s an insane sap.

중국어 캐나다: He does seem to be melting into his role as a true husband to Mi Young rather quickly. I mean, Gun does think of Se Ra, Mi Young mentions Se Ra, and he directs his secretary to book tickets to the US, but otherwise, there seems to be a lack of worry about his long-time girlfriend finding out about his shotgun wedding.

만: I suspect that’s not going to last. I think we’re going to see the return of Se Ra in the next episode.

중국어 캐나다: I actually expected to see her this episode. She was packing in the last one, and talking about an early, surprise return!

만: Same here! Instead we were treated to Gun competently delivering a baby. Is there anything he can’t do? I mean, aside from communicate like a mature adult, stand up to his browbeating grandmother, control his impulses, and figure out his own feelings.

중국어 캐나다: I found it hilarious that Gun kept confirming his achievements, such as delivering a baby and building a community centre, just to ensure that everyone knew who was responsible. Mi Young does not seem put off by this chronic need for acknowledgement.

중국어 캐나다: While Gun may be rapidly changing his attitude towards Mi Young, it seemed like the action stagnated this episode, as entertaining as it was. For a show that has zipped along in the first few episodes, episode 7 seemed to go nowhere. I am afraid that the usual drama stagnation is setting in.

만: It’s likely, though I suspect we’ll get much to distract us from any stagnation in the next episode. Honestly, I’d rather have more of these insane adventures like the ahjumma karaoke or frozen secretary or spontaneous baby delivery than the usual plot fillers like amnesia or noble idiocy. Though, I’m beginning to feel bad for the scheming stepmother, given how badly she’s kicked around by both Gun and Grandma. 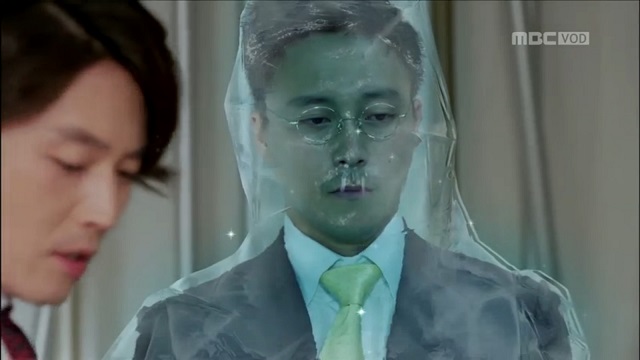 중국어 캐나다: Don’t worry. She’s still getting her cheap kicks in like opening the refrigerator doors repeatedly to induce morning sickness in Gun and Mi Young. Meanwhile, there is Daniel. Are we to assume that Daniel no longer suspects that Mi Young is his long lost sister? And if so, are romantic feelings developing, or does he sincerely wish to simply be Mi Young’s neighbourhood oppa?

만: I don’t think Daniel ever suspected it; he shrugged it off entirely when he heard her name. Even so, I hope this doesn’t turn into a forced love triangle. I kind of like the big brother dynamic, and it’s unlikely that either one of them would develop feelings after she thought he was a priest for so long, and he went along with it. That said, when Gun and Daniel had that meeting in Gun’s office, I have no idea what they talked about; I was too busy enjoying the auditory massage.

중국어 캐나다: I am enjoying the forced interaction scenario involving Gun and Daniel. It fills me with gleeful anticipation of their dueling baritones, and suit swapping (or is there more than one vibrant orange suit in Korea?).

만: Agreed! It was a feast for the senses.

중국어 캐나다: On a more subtle note, I am glad that Mi Young continues to check in on her friend, Ji Yeon. It is nice that she has a friendship completely separate from Gun, and she has not forgotten Ji Yeon even in the midst of the craziness.

만: Frankly, it makes her look more like a real person. The idea that she would be completely friendless is unappealing. I also hate disappearing characters, or characters that exist solely to be supportive. Her friend has her own problems, and it’s nice that they talk about them, too, like actual friends would.

중국어 캐나다: Yes, it’s a nice touch in a series full of nice touches. “Fated to Love You” is making every Wednesday and Thursday night fantastic.

만: Yes. “Fated to Love You” has bathed the world in a warm, fuzzy glow. Here’s hoping it lasts.