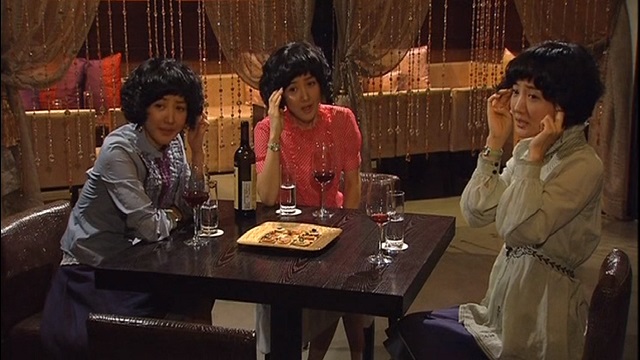 Side dish: Dong Wook could have used some coffee to stay awake for Yu Jin’s boring conversations. Since he is incompetent with his espresso machine, I would recommend Old Town Classic 3 in 1 Mix Instant White Coffee, or if Dong Wook can make it to Malaysia, he can have one made at an Old Town Coffee location. While he’s at it, he should order the Condensed Milk Hainan Toast, or the Kaya & Butter Steam Bread. Delicious!

Thanks to an ample voice plan on her cell phone, Yu Jin (Sa Kang) sees no reason not to chat all night with her boyfriend, Dong Wook (Shin Dong Wook). Not even Dong Wook’s need to sleep, especially during his boring conversation with Yu Jin. Yet, he is incapable of informing her that he simply wants to get off the phone. Dong Wook ends up singing to Yu Jin well past midnight until he finds reprieve by playing her a CD.

The next day, Yu Jin is in rough shape from staying up all night on the phone with Dong Wook, but blissfully happy. Her co-worker, Soo Kyung (Lee Soo Kyung) has been there and done that with her fiancé, Phillip (Choi Phillip), and recommends some space between a couple. Her boss, Mi Jin (Kim Mi Jin) instructs Yu Jin on how to set up the tracking function on Dong Wook’s phone, so she may know where he is at all times. 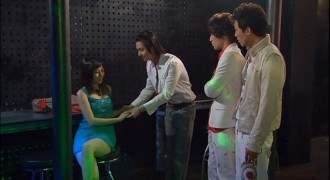 Meanwhile, Dong Wook’s friends, Hwan (Jung Hwan) and Ryohei (Otani Ryohei) point out that he is looking rough from lack of sleep. He ends up going to a night club with his buddies in the hope of rejuvenating himself. Dong Wook has just successfully picked up the girl that just turned away his friends when Yu Jin calls.

Yu Jin knows that Dong Wook is lying when he claims to be at home. She announces that she will visit him then hangs up the phone to track Dong Wook racing home. Once he is back in his apartment, Yu Jin informs Dong Wook that she will not be coming over after all. Dong Wook collapses on his bed in exasperation and exhaustion. 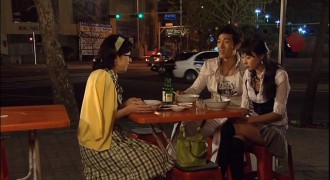 Hwan is having noodles with a girl when he spots Mi Jin at the next table. Mi Jin claims that she is simply at her second favourite late night restaurant. She surprises Hwan with a lengthy list of compliments before taking her leave. Hwan shakes himself out of a daze of attraction as soon as Mi Jin departs.

Dong Wook informs Yu Jin that he will be visiting a bar to arrange music, and Yu Jin panics, knowing that the bartender has her eye on Dong Wook. She forces Dong Wook to promise not to meet with her. Of course, Dong Wook breaks his promise, and is romancing the bartender when Yu Jin calls. Knowing exactly where Dong Wook is, Yu Jin feigns ignorance of his lying, choosing instead to claim to have a headache every time they speak. Dong Wook suffers from guilt about lying to Yu Jin and starts hallucinating. 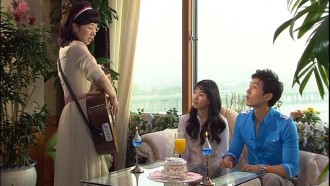 Hwan is at a café with the same girl when Mi Jin shows up singing in French and pretending to play acoustic guitar. She claims that her friends owns the café, so she likes to come and perform occasionally. Hwan seems impressed with Mi Jin’s performance, but distressed at repeatedly running into her.

In fact, both Dong Wook and Hwan begin believing that Yu Jin who seems to magically know where her boyfriend is, and Mi Jin who runs into Hwan repeatedly, are their respective soul mates. Then, Hwan comes to his senses, and correctly identifies the tracking function on Dong Wook’s phone, before discovering the same thing on his phone.

Hwan chases after Mi Jin in outrage over being tracked, until they both collapse on a park bench. Mi Jin proves to have more stamina, as she finds enough energy to attack Hwan with a smooch.

Dong Wook reveals to Yu Jin that she knows what she has been doing, and proposes breaking up. Yu Jin claims that she did what she did out of love. Dong Wook decides to give her a second chance under the condition she never lie to him again.

Later, Dong Wook goes to meet Yu Jin who is with her friend at a chapel. Just as he reaches the entrance, Dong Wook is reminded of his dream. The dream practically plays itself out as Soo Kyung (Lee Soo Kyung) runs down the aisle in tears, right into Dong Wook’s arms. When Soo Kyung extricates herself, and pushes past, Dong Wook is left in a state of shock. 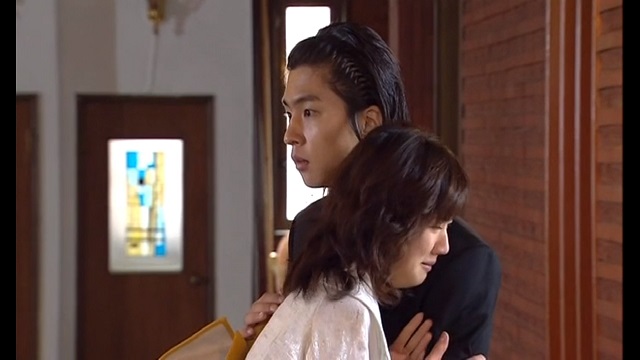 I am not even sure what Dong Wook is getting out of his relationship with Yu Jin anymore. She bores him to sleep, but keeps him up all night, though not for the reason he would like. When Dong Wook discovers that Yu Jin has been tracking and manipulating him, I thought for sure that he would seize the opportunity to finally break up with her. And yet, her tears and professions of love dragged him right back into this incomprehensible relationship. Though, in the end,

it was fortunate that Dong Wook stayed with Yu Jin, because it allowed him to finally make contact with the bride in his dreams, Soo Kyung.

While Yu Jin is reprimanded for her stalker behaviour, Mi Jin is rewarded for hers. I found Mi Jin’s casual repeat appearance before Hwan while he is on a date mildly amusing. By the time Hwan and Mi Jin are frothing at the mouth from running, my only hope is that Mi Jin’s successful capture of Hwan will mean that we see less of them in future episodes.

I also hope the writers move along the relationship between Dong Wook and Soo Kyung, because watching Dong Wook be with Yu Jin is like flogging a dead horse, but much more annoying.