We count down the days to Christmas by unveiling 24 magical Kdrama moments. Next up, “You’re All Surrounded”.

Episode 9 of You’re All Surrounded

This moment begins with the magical sight of abs. Cop, Seo Pan Seok (Cha Seung Won) suddenly remembers that he has a date with his ex-wife, Kim Sa Kyung (Oh Yoon Ah). He changes his clothing on the spot while his partner urges him not to blow his chance. 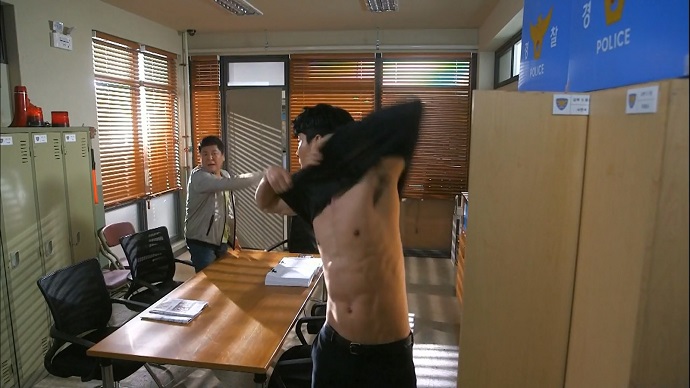 Pan Seok is a ball of nerves during the meal, especially when Sa Kyung asks what his female rookie was doing at his place. Sa Kyung stares, blinking slowly, as Pan Seok sweats and struggles to explain an innocent scenario without making it sound unseemly. Finally, Sa Kyung admits she believes him.

Pan Seok provides Sa Kyung with more entertainment as he proudly reveals that he used food blogs to find the restaurant. When the food arrives, he chews on a stiff rice wrapper without softening it in water beforehand, and makes a mess of his wrap. Sa Kyung shows Pan Seok how it’s done, and calls him, “Oppa”. They both burst into laughter.

Afterwards, Sa Kyung and Pan Seok go window shopping, and she teases him about his lack of fashion sense. When the sun goes down, it starts to rain, and they scurry for cover under a canopy. A passing car runs through a puddle, and Pan Seok places himself between the splash and Sa Kyung. Sa Kyung rewards Pan Seok for his chivalry with a kiss. 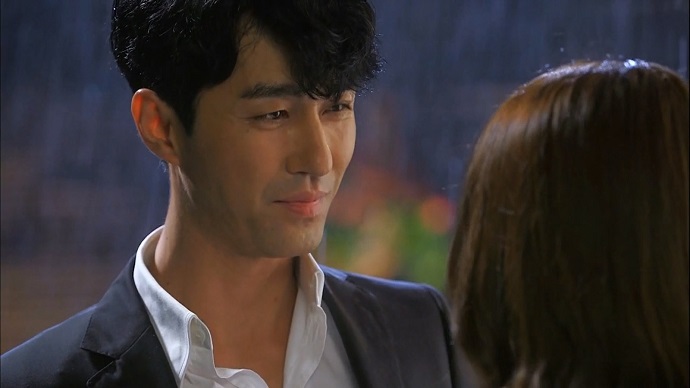 They pull apart to gaze at each other, but can’t help cracking up at acting like a young, dating couple. Pan Seok then clasps Sa Kyung’s hand, and they stand side by side, watching the rain.

One of the best things about this scene is the couple’s joy at the simple act of dating. They value this second chance at love, though not in any desperate way. It is unfortunate that couples like Pan Seok and Sa Kyung are not more common in K-dramas: two sexy adults with lots of easy going chemistry, and no unnecessary drama.

Check out our series review of “You’re All Surrounded”.