Side dish: No one looked like they knew how to start up the BBQ, so here is a guide on how to use a charcoal grill from Canadian Living.

Webtoon artist, Bang Myeong Soo (Byun Yo Han) and his friend, PD Kim Soo Jin (Song Hyo Jin) are now dating according to his ex-girlfriend, Jang Hwa Young (Lee Yoon Ji). This entire farce is played out for the benefit of film director, Jo Geun (Do Sang Woo), who is a friend of Hwa Young’s fiancé. Unfortunately, Jo Geun doesn’t seem to be buying any of it.

Outside the restaurant, Myeong Soo is already regretting the convoluted lie he must keep up for the sake of getting his movie made. His ex-girlfriend, restauranteur Na Ji Ah (Jang Ji Eun) points out that by trying to keep everyone happy, he is making an ass of himself.

Meanwhile, Soo Jin is seeing Jo Geun off when he challenges her to explain why she is producing such fluff given her background as a documentary filmmaker. Soo Jin haltingly claims to be expanding her horizons. Jo Geun would have guessed that she was suffering from dire financial straits. 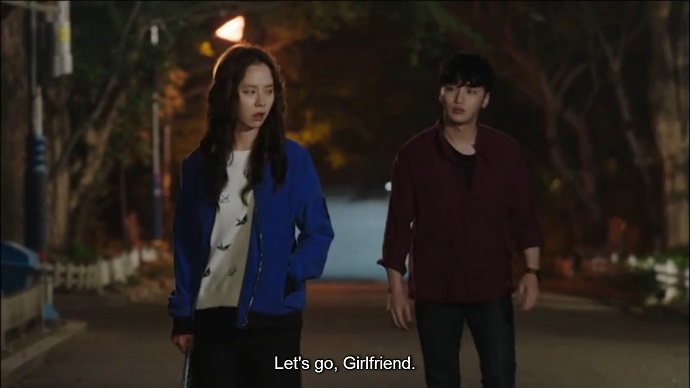 Walking home from Ji Ah’s restaurant, Soo Jin complains to Myeong Soo about having the best years of her life consumed by work. Between film making and keeping up a sham relationship for the sake of her career, Soo Jin fears that she will never truly date. Myeong Soo tries to cheer her up by offering his services for anything she might want to do with a boyfriend. Soo Jin irritably turns him down.

Soo Jin and Myeong Soo play a couple during a work meeting with Jo Geun until he physically inserts himself in between them. Of the three girlfriend characters in the story, Jo Geun wonders which one is the female lead. Myeong Soo splutters as he insists that all three girlfriends are equally important. Jo Geun never breaks eye contact with Soo Jin while claiming not to understand such inconstancy, then pressures Soo Jin until she admits that she, too, thinks there should be one love interest. A pissed Myeong Soo leaves and Soo Jin nervously follows.

Once they are alone, Myeong Soo takes issue with Soo Jin’s failure to back him up against Jo Geun. Soo Jin insists that a female lead will benefit the movie then presses him to reveal the ex-girlfriend he loved the most. There is one woman who still moves Myeong Soo, but he won’t reveal who. However, Myeong Soo does admit that his break up with Ji Ah was the hardest, and that he was happy to meet up with Soo Jin again. Soo Jin is taken aback by both claims, and though she rejects the latter, she appears touched by it.

Myeong Soo has decided that he cannot continue helping out in Ji Ah’s restaurant while trying to pass as Soo Jin’s boyfriend. When Ji Ah compares the situation to losing him to another woman, Myeong Soo scoffs at the idea of Soo Jin as his girlfriend, but Ji Ah suspects that Myeong Soo feels more than he is willing to admit, and kicks him out. 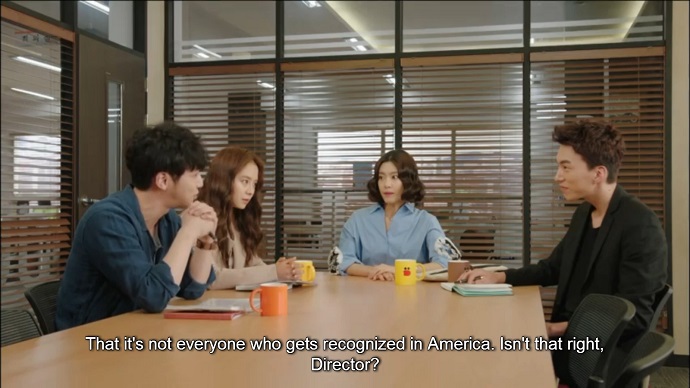 Jo Geun’s international reputation has prompted offers of funding from foreign tourism boards. To take advantage of these exotic locales, Jo Geun proposes changing the male character from a cartoonist to a travel-related profession. Myeong Soo instantly gets his back up since Jo Geun’s proposal would change too much of the characters and the scenario. Though Soo Jin agrees with Myeong Soo, she finds herself having to convince him to capitulate to Jo Geun for the sake of the production funding that the director brings.

Inspired by her sister’s workplace retreat, Soo Jin proposes the same organized bonding experience to Hwa Young’s chaebol fiancé, Young Jae so that Myeong Soo and Jo Geun can come to an agreement before production begins. Young Jae is easier to convince than Myeong Soo, who thinks that he will simply be railroaded by Jo Geun and his supporters. He is not even sure that Soo Jin is on his side, and she reassures him of her loyalty with a fist bump. 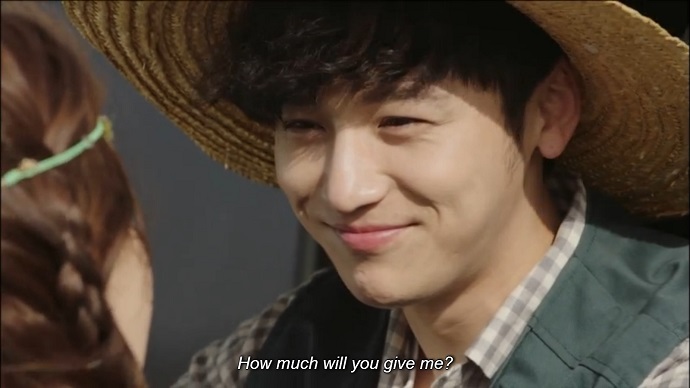 If Soo Jin and Myeong Soo attend the retreat, they will have to maintain their couple act during the entire trip. This calls for a meeting of minds with the ex-girlfriends to ensure that everyone sticks with the same script regarding the supposed couple. When the truth of how Soo Jin and Myeong Soo first met is deemed too bland, the ex-girlfriends change the locale to Jeju Island, and the story to one taken straight out of a movie scene.

Traveling to the retreat, Jo Geun is intent on getting Myeong Soo’s goat by claiming the front passenger seat, and forcing Myeong Soo to sit wedged between Soo Jin and Hwa Young at the back. At the retreat, Young Jae puts the two men together to work on the BBQ, and they end up coming to blows with Jo Geun claiming not to trust Myeong Soo. Their tense staring contest is interrupted by the arrival of Ji Ah and third ex-girlfriend, Ra Ra (Hwa Young), who gave in to their curiosity, and decided to crash the retreat.

Ji Ah and Ra Ra’s excuse for coming is to throw Hwa Young an engagement party since Ra Ra is Hwa Young’s purported schoolmate. Over dinner, Jo Geun asks what Ra Ra and Hwa Young had in common, given their disparate ages and personalities. Ji Ah stokes the fire by claiming that they were both attracted to the same man, someone everyone is acquainted with…actor, Jo In Sung! Everyone laughs while Jo Geun openly questions if Jo In Sung had even debuted at that time. Ra Ra masks the question by quickly proposing a toast, but Jo Geun witnesses Myeong Soo subtly stop Hwa Young, who can’t hold her liquor, from drinking the wine. 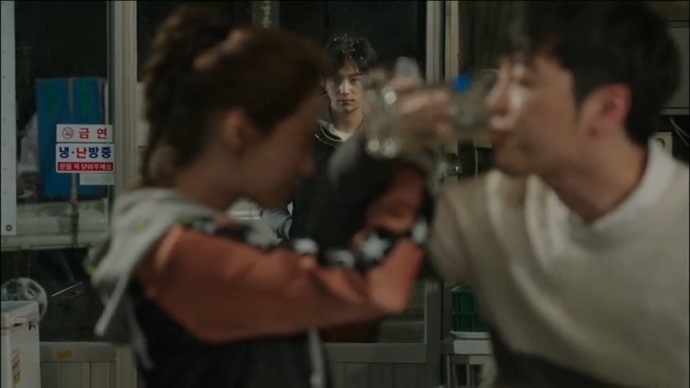 Jo Geun continues his inquisition by prompting Soo Jin and Myeong Soo to tell the story of how they first met, but he instantly recognizes the movie scene they pilfered it from. When Jo Geun asks about Soo Jin and Myeong Soo’s first kiss, it would seem that they have been trumped since they failed to prepare an anecdote. Myeong Soo chooses to recall the time he drove two hours just to see Soo Jin. The reality is that Myeong Soo never made his presence known to her, but he rewrites the ending with a kiss that finally changed the nature of their relationship. Soo Jin and the ex-girlfriends all appear deeply affected by the story.

A relentless Jo Geun asks for details of their first kiss. Myeong Soo is about to comply with a reenactment that has all the intensity of the first kiss that it actually is. Ra Ra’s wine glass goes crashing to the ground, and Myeong Soo reluctantly disengages while a shocked Soo Jin excuses herself from the table. 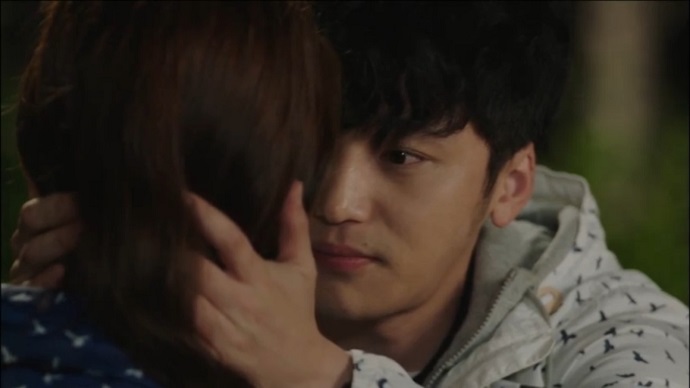 On Young Jae’s insistence, Soo Jin and Myeong Soo share the master bedroom, which leaves him embarrassed and regretful about his confession and actions at the dinner table. Noticing an insect, Myeong Soo finds an excuse to leave the bedroom. Soo Jin is in the bathroom replaying the scene during dinner in her mind while all three ex-girlfriends pile into her bedroom looking for an explanation. They end up debating among themselves about how much of Myeong Soo’s story was true.

It appears that everyone has forgotten the cardinal rule of convincing dishonesty: stick as close to the truth as possible. If Soo Jin and Myeong Soo had just embellished the true story of how they met, it would have kept them on solid ground while under interrogation by Jo Geun. Fortunately for us, their personal history was hijacked by the ex-girlfriends who never considered that a film director might easily recognize a scene lifted from a movie.

The comedy was pretty strong in this episode, especially by the women, but so were the feels. When Myeong Soo finally reveals how he had sought out Soo Jin during a low point in his life, but failed to muster the courage to actually make the connection, the regret over an opportunity lost was palpable. Byun Yo Han is really rewarding the production team for making him the male lead with his nuanced depiction of  remorse and desire.

Jo Geun is quite the interesting second male lead. It would appear that he is simply out to torment all the players in a production crafted for Young Jae’s viewing pleasure. In fact, Myeong Soo and Soo Jin are so preoccupied with maintaining the lie that they seem to be missing Jo Geun’s pointed interest in her. From his admission of being a huge admirer of Soo Jin’s work, to wedging himself between the couple to speak with Soo Jin in close quarters, to his genuine alarm over Soo Jin’s safety, it won’t be long until Jo Geun becomes an active participant in this messy network of love triangles. For now, he is entertainingly blunt in cutting through the bullshit, and Soo Jin has the most hilarious reactions to it.