Skip to content
Side dish: Hae Young may not know this but there’s more than one way to eat fried rice with an egg. Here’s a recipe for tapsilog, from the Philippines via Toronto. 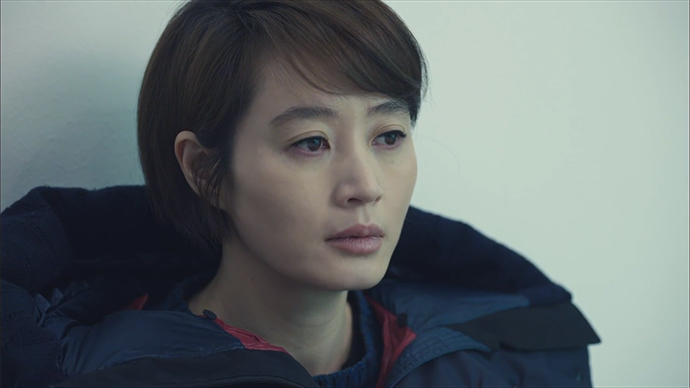 In the medical examiner’s office, the bones of police detective, Lee Jae Han (Jo Jin Woong) are laid out on examining table. In the hallway, profiler Park Hae Young (Lee Je Hoon) looks on as a devastated Cha Soo Hyun (Kim Hye Soo) awaits the results of the autopsy.

Soo Hyun flashes back to 1999, where she came in to work at the end of the Injoo case to find Jae Han was absent and his partner, Jung Jae has resigned. She goes to visit Jae Han at home, and discovers that he’s also on point of resigning. Soo Hyun rebukes Jae Han for trying to resign on his father’s birthday, which Jae Han had completely forgotten. She browbeats him into making seaweed soup for his dad, promising him that she’s a good cook and that she’ll help him. Soo Hyun turns out to be a complete incompetent in the kitchen, to the point where neither Jae Han nor his father can stomach the soup. When they decide to drink instead, Soo Hyun ends up drunk and has to be taken home by Jae Han in a taxi. 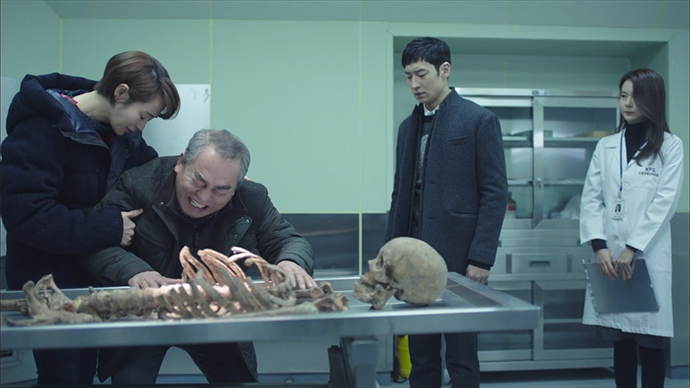 Back in the present, Jae Han’s father arrives just in time for the medical examiner to tell them the results of the autopsy: the DNA of the bones is a match for Jae Han. Soo Hyun leads Jae Han’s heartbroken father to the autopsy room to see the remains of his son. Meanwhile, Hae Young remembers all the times he spoke to Jae Han.

Later, at Jae Han’s funeral, Hae Young consoles Soo Hyun with the fact that even though he had no mourners, Jae Han would have been happy to know that someone still remembered him, even after 15 years. Soo Hyun’s biggest regret, however, is that she had no good pictures of the two of them together, nothing good to remember him by.

Soo Hyun flashes back to the past, to the day when Jae Han disappeared and Internal Affairs officers opened up his desk to find bundles of cash (that’s a bit obvious, no?). Soo Hyun promises his father that she will find him, but gets nowhere. In the present, Soo Hyun breaks down crying as she tells Hae Young that even though she came to believe that Jae Han was dead, she couldn’t help but hope that he would come back.

As Soo Hyun leaves a flower and salutes Jae Han’s picture, she tells him in voiceover that the last time she saw him, he promised they would talk on the weekend. Since she had to wait 15 years, Soo Hyun tells him that he can’t blame her for being upset with him.

At his house, Jae Han’s father places Jae Han’s memorial photo in his untouched room, as Soo Hyun and Hae Young look on.

Back at the office, Soo Hyun opens up the back of the Batman photo to take out the picture of herself and Jae Han together. She flashes back to when Jae Han first disappeared and she went through his things looking for a clue. Instead, she found the Batman picture with the picture of the two of them hidden behind it.

Meanwhile, Hae Young sits in his car and contemplates a business card for Wonjo Meat Grill House, which he found in Jae Han’s room. We flash back to 1999, where Jae Han stops in a convenience store and notices the headline on a newspaper, stating that the sentencing for the Injoo rape case was happening that day. Jae Han goes to where the teenaged boys are being taken away, and watches as the 1999 Hae Young calls out for his older brother, Park Sun Woo (Kang Chan Hee), as he’s led on to prison bus. Jae Han suddenly makes the connection that the Park Hae Young on his radio might be related to Sun Woo. Later, when he goes over Sun Woo’s file, Jae Han is disappointed to discover that Hae Young is not listed, since he has a different father. Instead, Jae Han goes to see Sun Woo and Hae Young’s mother.

Hae Young’s mother’s house has been vandalized and Jae Han finds her miserably cleaning up broken glass. She tells Jae Han about her regret that she couldn’t spend more time with her children, thanks to their extreme poverty, but that at least the two of them had each other.

Later, Jae Han goes to find Hae Young at his father’s house, and finds Hae Young waiting outside for his absent father to come home. Jae Han watches from afar, then follows Hae Young as he goes to a drinking establishment (presumably Wonjo Meat Grill House). When Hae Young tries to order omelet rice, he’s almost kicked out, but Jae Han surreptitiously pays the waitress to make him one. Hae Young cries as he eats, remembering Sun Woo’s promise to take him out for omelet rice.

In the present, Hae Young returns to Wonjo Meat Grill House, and the same waitress scolds him for not coming by since he became a cop. When Hae Young shows her Jae Han’s picture, she identifies him as the man who paid for Hae Young’s meal that night, and his subsequent meals to make sure he ate. She tells Hae Young that Jae Han had told her never to reveal his identity. 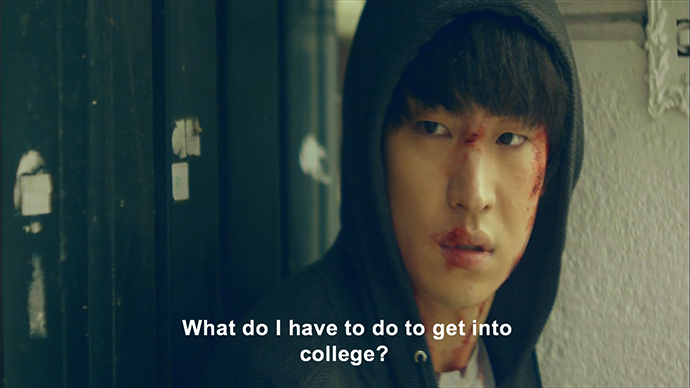 Hae Young flashes back to the past, where as a teenager he never studied and fought any time anyone mentioned his brother. One day, after he had the run-in with the guys who helped to frame his brother, Hae Young decided to try to get into university, but when he asked his only friend what kind of school he could get into, she suggested the Police University, since it was free and top tier. Hae Young initially dismisses the idea, but thinks again when he’s reminded of the words of the guy who framed Sun Woo, that Sun Woo ended up the way he did because he had no money and no power.

In the present, Hae Young is back in his car when the time hits 11:23 and the radio starts working. Hae Young tells Jae Han in the past that maybe Jae Han’s happiness and spending time with loved ones is more important than working on the Injoo case, but Jae Han is more concerned with Hae Young’s happiness. Jae Han wishes for Hae Young to live a normal life, and assures Hae Young that he won’t let the Injoo case go cold. Hae Young tells him about the last transmission and the gunshot, but Jae Han is undeterred. But before Jae Han can complete his thought, the radio clicks off.

In the present, Hae Young and Soo Hyun meet in the station conference room, where they take stock of who they can trust. After the discovery of Jae Han’s remains on the property of gangster, Kim Sung Bum, the Violent Crimes detective missed arresting Sung Bum by minutes, likely due to a tip-off from someone in the department. When Hae Young suggests letting the department know that they have a mole, Soo Hyun tells him that they can’t. The death of section chief, Ahn Chi Soo means that the department now falls under police chief, Kim Bum Joo (Jang Hyun Sung), the same man who was in charge of the Injoo rape case and likely involved in the murders.

Instead, Soo Hyun decides that the cold case squad will quietly look into the Injoo rape case, and hope that finding the culprit of that case will lead them to whoever killed Jae Han and Chi Soo. Soo Hyun assigns detective Kim Gye Chul (Kim Won Hae) to find Kang Hae Seung, the woman who survived the Injoo rape case, and forensics expert, Jung Hun Ki (Lee Yoo Joon) to look into the evidence collected at the time.

It doesn’t take Gye Chul long to track Hae Seung down through insurance records, but he’s unable to get her address. Instead, they have a general idea of where she lives, and that she sees a psychiatrist at a particular hospital on a regular basis. Armed with that information, Hae Young sneaks away from the detectives watching his apartment, and helps Soo Hyun track Hae Seung down. In fact, it’s not long before Hae Young spots Hae Seung in the neighbourhood of her psychiatrist’s hospital.

When Hae Young introduces himself as a policeman, Hae Seung is reluctant to talk to him. But, when he adds that he’s Sun Woo’s brother, she agrees. At a café, she tells Hae Young and Soo Hyun that Sun Woo was the only person who was ever genuine with her, and we flash back to 1999, where Sun Woo runs into the teenaged Hae Seung drinking by herself at night. When Sun Woo tells her to go home, Hae Seung shows him the scars left by her abusive, alcoholic father, and instead, Sun Woo tells her that he’ll help her escape her home, by teaching her to study.

In the present, Hae Seung adds that Sun Woo saved her life, and back in 1999, Hae Seung runs to the rooftop of the school after the news of her rape gets out and everyone blames her for it. But, before Hae Seung can jump, Sun Woo takes her hand and pulls her back, telling her that what happened wasn’t her fault.

In the end, however, between her father’s threats and Bum Joo’s persuasion, a young and frightened Hae Seung betrays Sung Woo and names him as the rapist. Soo Hyun asks Hae Seung who the real rapist was, and we flash back to the past to see a group of boys walking down a street, as Jae Han surreptitiously watches. 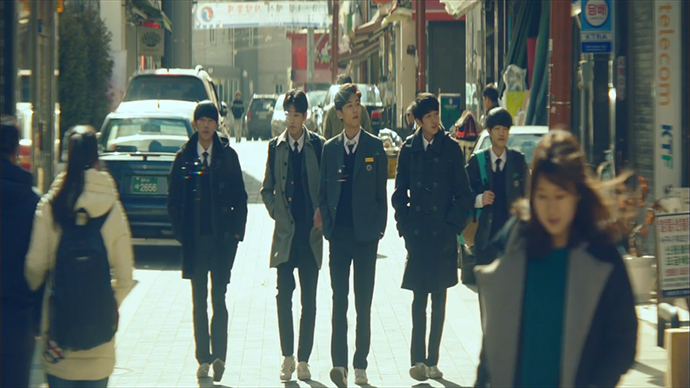 There wasn’t a whole lot of action this episode, but man, it was pretty devastating to watch Soo Hyun and Jae Han’s father say goodbye to Jae Han. Even more devastating was Jae Han’s acceptance of the risks, when Hae Young tells him how much danger he’s in and asks him to forget about the case. Having seen how powerless he was to stop anything in the last episode, it’s pretty amazing that Jae Han doesn’t try to explain what happened to Hae Young, but instead just takes responsibility for not being able to save Sun Woo, whatever that costs him. No wonder Soo Hyun thinks he’s a superhero.

I’m usually wrong when I make predictions, but I don’t think Jae Han is going to survive this show. I can’t see any way of saving him that doesn’t negate the entire story. Plus, having given him a sendoff like that, it would be pretty difficult to just make it so it didn’t happen. Here’s hoping I’m wrong, and that Jae Han and Soo Hyun get their happy ending. Because when Soo Hyun found the picture behind the Batman photo in Jae Han’s room, even I almost got teary-eyed.

In the meantime, I’m dying of curiosity about the case here. Who is that kid? What is going on? I need explanations!