Side dish: Ha Won and Ji Woon both know that cheese is a magical ingredient, and they seem to be fans of the pool. So, maybe they’ll appreciate Brazilian Cheese Bread (Pão de Queijo). They’re gluten-free and timely with the Rio Paralympics starting soon.

Ha Won (Park So Dam) inadvertently succeeds in her first mission when the Chairman’s pop star grandson, Seo Woo (Lee Jung Shin) mistakenly throws her a birthday party. For the occasion, all three of the Chairman’s grandsons sit down to a meal together. Ha Won captures this fulfillment of the Chairman’s mission with a group selfie. Only after the photo is taken does Ha Won reveal the truth.

Just prior to the cake and fireworks, playboy grandson, Hyun Min (Ahn Jae Hyun) and misfit grandson, Ji Woon (Jung Il Woo) were about to come to blows over Ha Won. Hyun Min attempts to play it off as part of the birthday surprise. Ji Woon has none of it, and insists that he was being serious.

Ji Woon is being serious, but his real motivation for stealing Ha Won away from Hyun Min is a misguided attempt to protect Hyun Min’s childhood friend, Hye Ji (Son Na Eun). Hyun Min takes the threat of Ji Woon seriously, and warns Ha Won that Ji Woon is in love with Hye Ji. Ha Won, for her part, finds herself shaken by Ji Woon’s intensity. Meanwhile, Hye Ji can only think of Hyun Min’s rejection of her, and listlessly kicks Ji Woon out when he drops by for a visit.

The Chairman is thrilled with Ha Won’s blurry selfie with his grandsons. So much so, he later enlarges and frames this rare photo of his estranged family. The Chairman rewards Ha Won with a year’s worth of college tuition plus a bonus that equals the outstanding balance to house Ha Won’s mother’s ashes at the crematorium. Ha Won realizes that the Chairman’s secretary,  Yoon Sung (Choi Min) is the one who suggested the bonus amount to the Chairman and thanks him.

Ha Won returns her mother’s ashes to the crematorium and notices a memorial to a woman who died on the exact same date as her mother. Ha Won takes a flower from the bouquet she brought and places it by the urn of a Ha Jung Soon. One suspects that this is Ji Woon’s mother, and the coincidence is a clue to some future revelation.

Meanwhile, Ha Won’s evil stepmother manages to have herself booked as the beautician to the Chairman’s wife. She fishes for information about Ha Won at Sky House, but gets only icy attitude. Yet, the stepmother calls her daughter to report that Ha Won is definitely at Sky House, and her evil daughter has a fit.

Ha Won learns that the memorial ceremony for the Chairman’s three sons is coming up. One committed suicide while the other two died in a car accident 10 years ago. It is an annual event that the grandsons have never attended, and refuse to attend this year. Ha Won learns of this, and in spite of being kept in the dark about the underlying family drama, she decides to volunteer for a mission to get the grandsons to attend the memorial ceremony. The Chairman is cautiously hopeful. 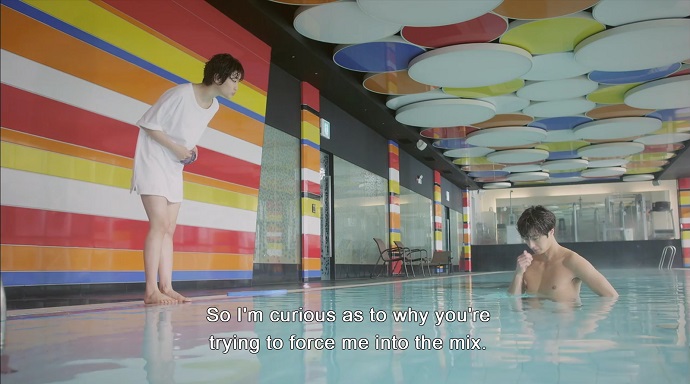 Ha Won begins her mission by targeting Ji Woon at the pool. However, she gets sidetracked by sexual innuendo regarding skinny dipping. Ha Won reveals that she is fully aware of the love triangle consisting of Ji Woon, Hyun Min, and Hye Ji, and states that she has no desire to get mixed up in it. Ha Won gains a victory by scaring Ji Woon away after threatening to disrobe, but is shaken when Ji Woon walks in on her in the shower and reiterates his goal to steal her away from Hyun Min while touching her face. 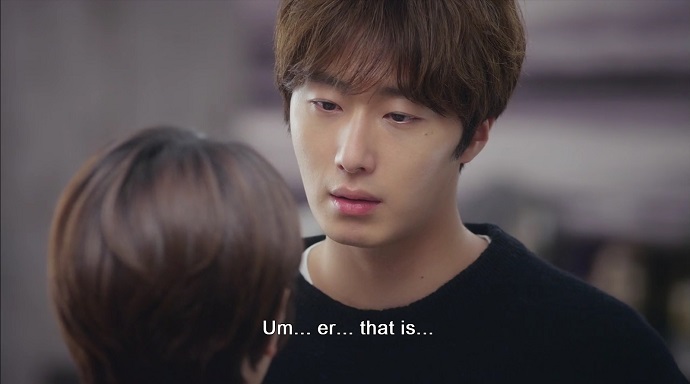 Still, Ha Won manages to make inroads in her mission. After snooping around Seo Woo’s room, she correctly guesses that he wants to sing a song he wrote to his father. Seo Woo appears taken aback by Ha Won’s intuition.

Ha Won meets Hyun Min’s mother while she is waiting in vain for her son at Sky House. Hyun Min’s mother uses the agreeable Ha Won as a porter for her shopping spree of designer shoes and bags to be worn in the coming week, and appears to be charmed by Ha Won. Hyun Min’s mother invites Ha Won to dinner, and that is when she drops the bomb: believing that Ha Won is her son’s fiancée, she nastily rejects her. Ha Won is saved by the sudden arrival of Hyun Min who completely ignores his mother. 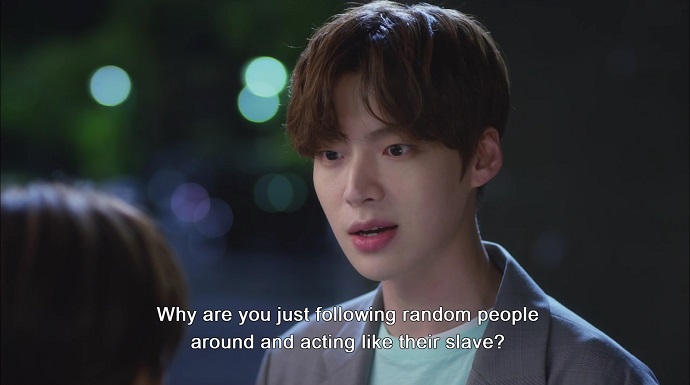 Once outside, Hyun Min reprimands Ha Won for getting involved in matters that do not concern her. When Ha Won protests that she was only doing a favour for a friend’s mother, Hyun Min angrily denies that they are friends. Ha Won is hurt and storms away.

Not suprisingly, the amiable Seo Woo has a loving relationship with his mother. She arrives from the US for the memorial ceremony full of enthusiasm about her son. However, not even she can convince her son to attend the memorial.

Ha Won is noisily doing exercise in the communal courtyard to ward off indigestion when Ji Woon returns to Sky House. Ji Woon pricks her thumb to provide relief, and the practice reminds Ha Won of her mother. She reveals to Ji Woon that, like him, she does not know her biological father. She expresses a deep desire to meet her real father, just once, then suggests to Ji Woon that he might feel the same way. 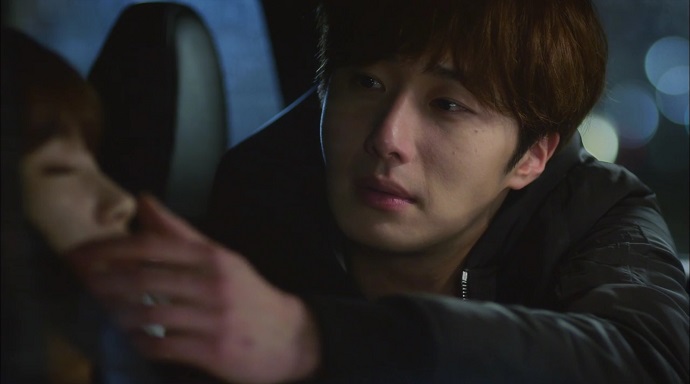 On the drive back to Sky House, Ha Won falls asleep and murmurs about her father. Ji Woon regards her with affection, and later, is taken aback when Ha Won touches his arm, because it reminds him of when their hands touched during the thumb pricking. Her words about his father being the one his mother loved echo in Ji Woon’s head as he remembers being alone at his mother’s funeral.

Hyun Min starts feeling guilty about blowing up at Ha Won, but is unable to find her at Sky House. He witnesses her return with Ji Woon, and sheepishly follows her before jealously asking about her outing with his cousin. Ha Won throws his words about them not being friends back in his face then guesses that the person he wished to avoid at the memorial ceremony was his mother. She reminds him that he should focus on his father.

The day of the memorial ceremony, Ha Won greets the Chairman, his wife and Yoon Sung. Though all the grandsons are shown looking pensive in their respective places, none appear at the memorial venue, and Ha Won is forced to admit defeat.

I continue to find “Cinderella and Four Knights” very entertaining, and that is in spite of some poor decision making on the part of the lead characters.

Ji Woon boldly announces his plan to steal Ha Won, then continues to act hostile towards the intended target of his seduction. If the girl wants you to sit down to a meal with your hated cousins or attend your father’s memorial, will staring her down then storming away win her heart? Fortunately Ji Woon is played by Jung Il Woo who can do the pouty asshole act and still manage to make hearts race with an intense stare.

So, I can’t blame Ha Won for freezing up when Ji Woon corners her in the shower, and I applaud her for her no nonsense recovery: giving herself a cold shower while calling him a good-for-nothing, handsome jerk was hilarious. I can blame Ha Won for poor judgement in getting mixed up in a family drama without at least insisting that Yoon Sung give some details. We know she has nothing, but good intentions, yet it is understandable why Hyun Min is outraged at her interference. If the man has issues with his mother, the last thing he needs is someone he barely knows to get herself bullied by the mother, and have to be rescued.

This episode had some noteworthy developments where the Chairman’s wife is concerned, which were not mentioned in the recap. She appears to have Yoon Sung in her cross hairs, giving him pointed looks while he politely ignores her. Combine this with her smooth suggestion to the Chairman that who he needs is a dependable son, not a grandson, and you have to wonder what she has in mind.

I continue to marvel at the chemistry between Jung Il Woo and Park So Dam. Their time together at the convenience store conveyed so much with minimal dialogue. I am also enjoying the scenes between Park So Dam and Ahn Jae Hyun, but for a different reason. Hyun Min’s raging ego versus Ha Won’s confused refusal to play along is a great dynamic, and makes Hyun Min’s inevitable return to Hye Ji plausible.