Asians tend to look younger than they are, but what happens when K-dramas decide to cast actors years past high school as teenagers? The results can be hard to swallow. 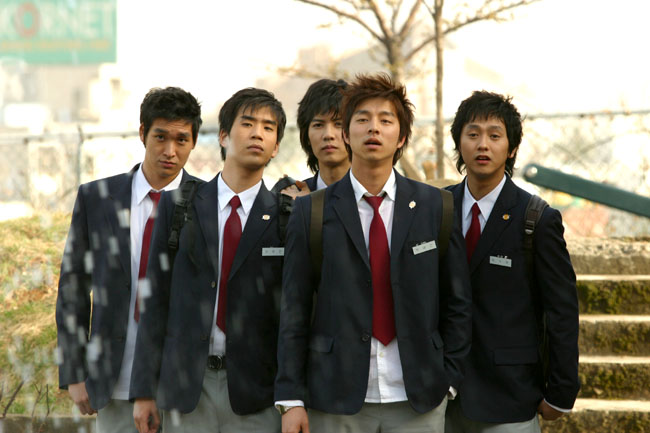 Gong Yoo was 26 when he played Park Tae In, a misunderstood teenager who falls for his teacher. It’s not a bad drama by any stretch, aside from the fact that Gong Yoo was probably an unconvincing teenager when he was actually a teenager; at 26, he’s borderline ridiculous. That’s not to say he’s the only one with this problem: The closest person to an actual high school student in this photo is the 20-year-old Jung Eui Chul, standing behind Gong Yoo and to the left. If he looks familiar, scroll down to “Shut Up Flower Boy Band”. – Only 만 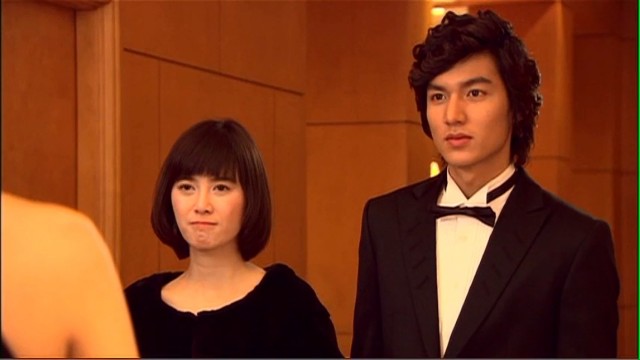 Ku Hye Sun has all the features that should make her youthful, being petite and wide-eyed. What makes her an unconvincing teenager is her acting. It is like Ku Hye Sun has forgotten how teenagers carry themselves, and resorted to acting like a bratty 12 year old, instead. She pouts a lot, stomps around, seems to find boys icky; it’s ridiculous. Lee Min Ho has hair in this series that hasn’t been seen since 1985. Hence, who could believe that a teenager in 2009 would be caught dead with a coif like that? – Junggugeo Kaenada 중국어 캐나다 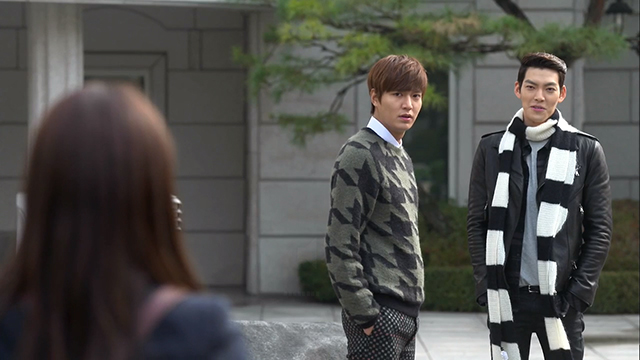 If not for high school uniforms, “The Heirs” would have looked much like an episode of “Beverly Hills 90210”, with a cast of 20-somethings dressed to go clubbing playing high school students. Luckily a uniform goes a long way towards making a convincing teenager, and in fact, most of the cast was young enough to pull it off. The notable exceptions were Lee Min Ho, who despite getting a younger makeover via some flashy sweaters and a lame haircut, still looked 26; Kim Woo Bin, who looked anywhere from 20 to 40 (I think it was the hair, because he looked younger after he stopped putting it up); and Kim Ji Won, who’s only 21 but, as Rachel, looked like a much older, evil robot. – 만 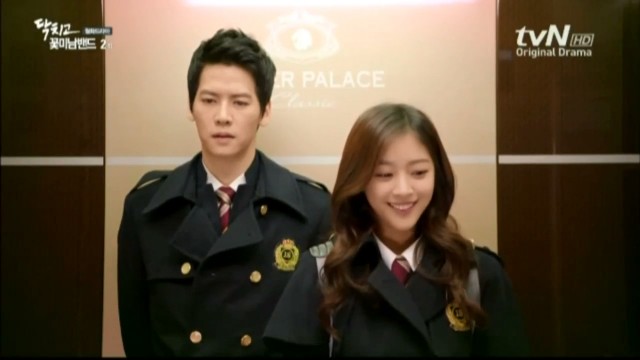 The believability of the actors as teenagers varied in this series. After the untimely demise of Lee Min Ki’s character took out the least convincing teenager of the band, the rest of the members of Eye Candy could pass. The worst teen of the show was the lead of the rival band, Seung Hoon (Jung Eui Chul). At ripe age of 27, the poor actor reportedly starved to make himself ganglier and hence, younger looking. It didn’t help that his character’s childhood friend, and the one who reportedly defended him from bullies, is played by Jo Bo Ah, who looks sufficiently young and cute. No wonder Seung Hoon looked so grim all the time; he just wanted the hunger pains to stop. – 중국어 캐나다 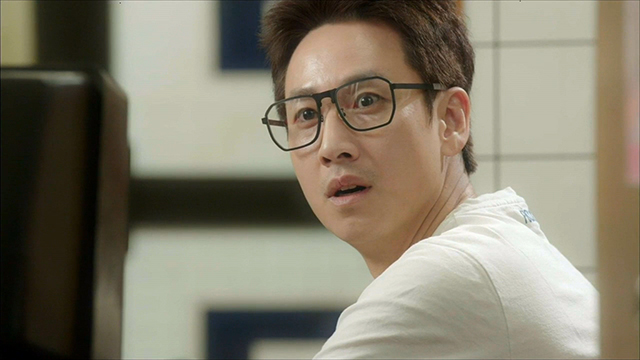 Set in 1997, “Miss Korea” features flashbacks to the main characters’ teenage years in the 80s. Rather than hire younger actors, which would have made sense given the time gap of 10 years, the whole cast elected to act it out themselves, to mostly laughable results. The 25 year old female lead, Lee Yeon Hee was somewhat convincing, but Lee Sun Gyun was another story. The 39 year old actor transformed himself into a teenager by putting on a pair of glasses and acting goofy. It was so unconvincing that it was unintentionally hilarious, thus creating a small bright spot in this otherwise glum show.  – 만

Any internet image search will show that not even actors who can still play convincing teenagers looked anything but embarrassing as actual teens. Yet, keeping in mind the sheen of K-drama glamour, these teenagers were credible enough. 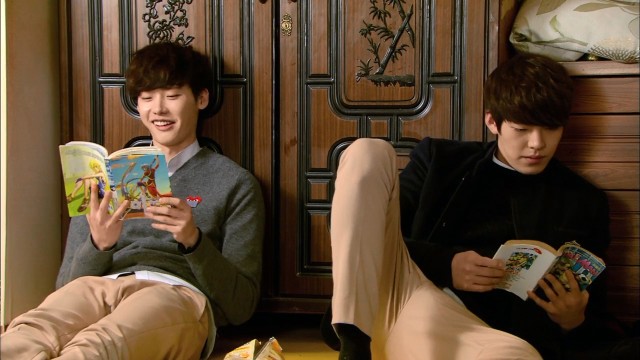 Lee Jong Suk and Kim Woo Bin are a mere three years younger than their teacher, played by Daniel Choi. Yet, they make convincing teenagers. This seems to be the bread and butter of both actors since they are repeatedly cast as teenagers; Lee Jong Suk in “High Kick 3”, “I Hear Your Voice”, No Breathing and Hot Young Bloods, and Kim Woo Bin in “White Christmas”, “Gentleman’s Dignity”, “To The Beautiful You”, and “The Heirs”. It is only when you see the actors’ leaked high school photos that you realize what pure fantasy their teen characters are. 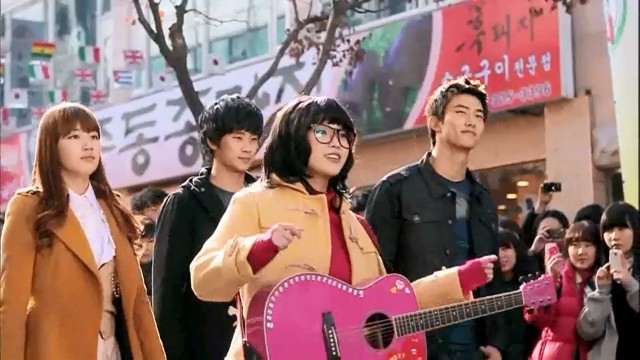 The majority of the cast are supposed to be fame hungry teenagers, and they all look the part, though for Bae Suzy and IU, that is to be expected, because they were actual teenagers. The rest manage to retain the fresh yet gawky look of youth into their early 20s.

My Love From The Stars 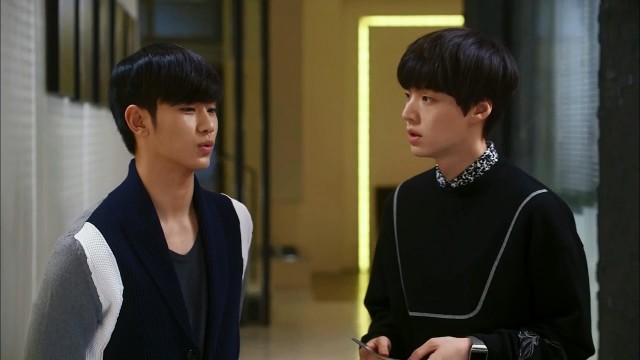 It turns out the actor who plays the lead’s sulky teenage brother, Ahn Jae Hyeon was actually 26 years old, thus making him older than the lead, Kim Soo Hyun. However, as 만 points out, either of them could have passed for a teenager or an alien, so a successful facsimile of either character was guaranteed.
– 중국어 캐나다

Readers: which adult masquerading as a teenager had you in a state of disbelief?

And more importantly, how relieved were you to know that you weren’t attracted to someone underaged? Confessions in Comments below.