Who doesn’t like a fabulous head of hair? It’s Friday, so let’s take a moment to look at our favourite K-drama coifs.

Yoon Sang Hyun’s fabulous turn as aging idol, Oska in “Secret Garden” had much to love about it, not least this sideswept feathered hairdo. As his cousin Joo Wan (Hyun Bin) took great pains to point out, it rightfully belongs on the head of a middle-aged woman. But, if anyone could pull it off, it’s the shameless Oska. Work it! – Only 만

Dying is a bit of a downer, and then, the Grim Reaper, calling himself the Scheduler (Jung Il Woo), shows up and he’s a bit of a dick. At least you can focus on the Scheduler’s amazing hair; wavy and continuously flowing in the right direction, like Botticelli’s Venus. Jung Il Woo’s amazing wind swept hair made an encore performance in “Flower Boy Ramen Shop” though, straighter and lighter in colour than before. It just wasn’t the same.

It is worth noting that the second female lead in “49 Days” (Seo Ji Hye) had the best fringe I have seen in K-drama. Her villainy did not stop me from admiring her hair and her amazing wardrobe.- Junggugeo Kaenada 중국어 캐나다

A time-travelling fantasy saeguk can’t help but feature fabulous hair, especially when Lee Min Ho is the star. As General of the King’s Guard, Choi Young, he went through three hair iterations over the course of 24 episodes. Of course, none of these bore the slightest resemblance to that of a Goryeo-era general, but why let historical accuracy get in the way of a first-rate coif? We started out with this beachy hair with a ponytail, which gave him a certain unkempt, surfer boy appeal.

I’m not sure what happened, but partway through, he suddenly traded his wavy locks for a headband and an asymmetrical fringe.

Towards the end, he takes off the headband again and goes back to his wavy locks, but sadly minus the ponytail.- 만

Having only seen Kim Sun Ah as the dowdy title character in “My Lovely Sam Soon”, I was pleasantly surprised to see her all gussied up with a sophisticated wardrobe and styling to match. Her hair cut and colouring were so flattering that I forgave her character’s bitchier moments more easily than I otherwise would have. In contrast, her cute male lead, Lee Jang Woo had terrible helmet hair, and that, in combination with some horrendous clothing, made it a little harder to love him. But, just a little. – 중국어 캐나다 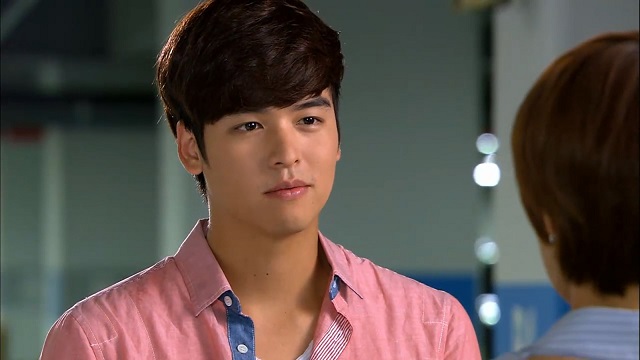 Being spontaneously transported 300 years into the future brings its own set of problems, not least of which is assimilating into a time that’s not your own. For Crown Prince Lee Gak (Park Yoochun) and his companions, this means leaving behind their Joseon-era headgear and letting their top knots down. Rather than sexy ponytails or manes billowing in the breeze, they all elect to tie up their hair in styles reminiscent of preteen girls from the 80s. Of course, this doesn’t last, and the scene where they all have to chop off their hair or face homelessness is priceless. – 만

Jang Geun Suk rotates through a series of hair styles and one hair cut during “Pretty Man” with varying degrees of success. He starts with his signatures flowing locks.

He tries working with what he has by tying his hair up to create a faux quiff.

Jang Geun Suk ends up committing to short hair with a cut, but the results aren’t pretty.

Fortunately, the hair stylist got the hang of it after a few unfortunate episodes. Thus, Jang Geun Suk and his hair lived happily ever after…until Episode 16.

Meanwhile, after unfortunate helmet hair in “I Do, I Do”, Lee Jang Woo enjoyed flowing locks as the second lead in “Pretty Man”. 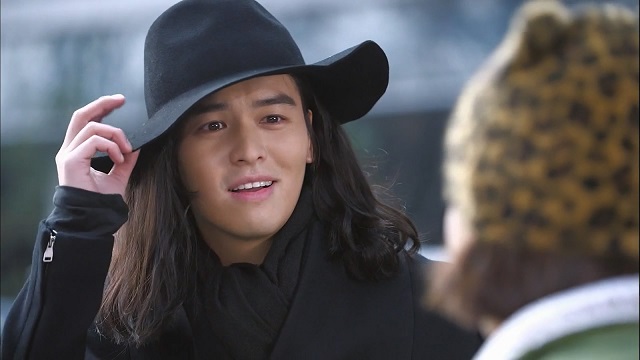 No, wait. That was the hat with hair glued to it by the crafty female lead, Bo Tong (IU). Lee Jang Woo’s character was demonstrating his compatibility with Bo Tong in his appreciation for her work. Here he is minus the hat. Hair doesn’t make the man, but it sure helps. – 중국어 캐나다

Readers: which K-drama coifs do you remember fondly?

Tell us about your dream manes in the Comments below.