A bottle of mind games comes between Yu Jin and Dong Wook.

Side dish: Yu Jin dines on pasta, seemingly a fancy dish in Korea, on White Day. You can make a white sauce penne by following the recipe here. This is not only aesthetically on point for White Day, it won’t show up if splattered on a white dress, like Yu Jin’s.

Yu Jin (Sa Kang) and Dong Wook (Shin Dong Wook) are having a drive in the countryside listening to “Fly Me to the Moon”. Dong Wook romances her by reciting the lyrics in Korean. Yu Jin closes her eyes in expectation of a kiss, but finds herself locking lips with a bottle of shampoo that Dong Wook inserted between them.

Back at work, Yu Jin, her fellow proofreader, Soo Kyung (Lee Soo Kyung) and their boss puzzle over the meaning of this gift. It is suggested that Dong Wook might have hidden a pricier gift inside the bottle. Yu Jin pours the contents out, and finds nothing but shampoo.

Working out at the gym with his buddies, Dong Wook explains that he gave the cheap and random gift of shampoo to be

unpredictable and to prevent Yu Jin from expecting expensive gifts on a regular basis. Ryohei (Otani Ryohei) wonders why it has to be so complicated.

At home, Yu Jin is waiting with her roommate, Min Ae (Jang Min Ae) by her phone for Dong Wook. Dong Wook calls to break their scheduled date. Min Ae is able to predict Dong Wook’s excuse word for word, being a player herself. Yu Jin’s

At a ballet studio, the teacher stops her class in order to be introduced to Dong Wook by his friend, Hwan (Jung Hwan). Dong

Wook has come to coordinate the music for the teacher’s modern interpretation of Swan Lake. She flounces about while rejecting Dong Wook’s music suggestions. Her students recognize their teacher’s flirtation tactics, and one student decides to take on the challenge of stealing Dong Wook away from her teacher.

Out in the hallway, the student tells Dong Wook that he reminds her of her boyfriend who died in a motorcycle accident after giving his helmet to her. She ends up talking him into taking her out to a lake on White Day.

At lunch, Hwan steps away from the table, and the ballet teacher finds a lame excuse to touch Dong Wook. Dong

Wook advises her to be direct, since playing games only works when both parties are emotionally invested. The teacher correctly interprets this to mean that Dong Wook has no interest in her, and she appears to give up. 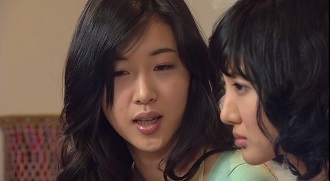 Dong Wook lies to Yu Jin about a sudden business trip and breaks their date on White Day. Yu Jin runs to Min Ae for comfort. Min Ae predicts that Dong Wook will cancel his trip last minute and show up with flowers in hand. Yu Jin is thrilled with Dong Wook’s tactic, and Min Ae reprimands her for acting so eager. Min Ae also predicts that Dong Wook is two-timing on Yu Jin. Yu Jin has a childish fit.

Yu Jin quickly goes on a blind date to get over her disappointment. It turns out that her date is her male counterpart in that they

are both formal and ridiculous. When asked, she denies she is dating anyone else. They agree to have another date on White Day. Yu Jin is satisfied that she is sticking it to Dong Wook.

Dong Wook is rowing a boat while the tragic ballet dancer scatters the ashes of her dead boyfriend into the lake. The ballet dancer is working the moment when it is interrupted by Hwan and the ballet teacher in another row boat. The teacher reprimands her for using the same internet sob story too many times. The student protests, the teacher screams her feelings for Dong Wook, Hwan begs Dong Wooks to teach him his seduction tactics, and Dong Wook looks overwhelmed. The ashes turn out to be flour, and they are dumped on the teacher’s head.

Yu Jin is ready for her White Day date with her male counterpart who she calls Forever Man, convinced that they may be soulmates since they are so alike. She has just confirmed

details with her date when Dong Wook calls claiming to have cancelled his business trip just as Min Ae predicted. Yu Jin is losing her mind over who to meet up with when the door bell rings.

In the next scene, Yu Jin is eating at the café with Dong Wook. She remembers belatedly to slip away in order to call and apologize to Forever Man for standing him up. He drops the flowery language he has been using thus far, and curses her out. Yu Jin listens in shock. Meanwhile, back in the dining area, Dong Wook looks out at the rain, and thinks cynically about winning this round of the romance game. It looks like Soo Kyung passes in front of the restaurant windows, so she and Dong Wook miss each other again.

It is hard to take Yu Jin seriously, or to understand why Dong Wook is bothering with such an easy target. She predictably resorts to puppy dog eyes and little girl mannerisms, which should not be appealing to a man who believes in being unpredictable. On the plus side, I liked Min Ae better in this episode than the last, because she was ensconced in her apartment. As a result, she was unable to use men for her cruel amusement. I suspect that I know who Min Ae is going to be paired off with in the end, but I can’t help but think she should try dating Dong Wook so that they can inflict their dating game tactics on each other. It is surprising that Dong Wook fell for the ballet student’s sob story. I suppose this is to demonstrate his compassionate side, rather than how gullible he is. I am just waiting for him to move on from Yu Jin, and meet Soo Kyung ASAP.