This is what you get for playing cute.

Side dish: The one sweet I can never resist is Portuguese custard tarts, or pasteis de nata. I’m partial to the ones from the Golden Wheat in Toronto, but you can also use this recipe from Leite’s Culinaria to make your own, if you’re ambitious. Let me know how they turn out, or better yet, invite me over to taste test.

Yu Jin (Sa Kang) dispenses advice to Soo Kyung (Lee Soo Kyung) and Mi Jin (Kim Mi Jin) from her magical notebook on how to conquer relationship ennui by being cute. Step one is to smile and speak with a lisp. Step two is to personify objects in a cute way. Step three is to refer to yourself in the third person. Mi Jin demonstrates all three by telling them that Mr. Watchy told Mi Jin that it’th time to go back to work.

Soo Kyung’s boyfriend, Phillip (Phillip Choi) walks down the street with Min Ae (Jang Min Ae), and suggests they take a shortcut down a dark alley. Once they get there, he pushes her against the wall to kiss her, but is interrupted by one of her exes spotting her from a distance. The ex begs her for another chance

while belittling Phillip, but she coldly sends him away. Phillip tries to kiss her again, but Min Ae refuses, insisting that they kiss in a public place instead. Min Ae drags Phillip to a busy street, but gets a phone call from boyfriend, Ryohei (Otani Ryohei), inviting her out for sushi. She turns Ryohei down, and kisses Phillip in public.

At a park, Hwan (Jung Hwan) is about to go roller-blading when Soo Kyung falls off her bike in front of him. He talks her into buying him tea as thanks for returning her engagement ring, but she spends the whole time correcting the grammar of his cheesy lines.

When Soo Kyung attempts to leave, Hwan proposes marriage. Hwan was only doing it to make a point, though, and wonders what she must have on her mind since she forgot she lost the ring. He counsels her to give Phillip a gift on White Day, something that the two of them can enjoy growing together.

When Soo Kyung goes to meet Phillip, she’s reminded of Yu Jin’s advice, and attempts to be cute to everyone’s surprise and horror. Phillip, who is clearly feeling guilty, finally decides to go along with it, and they both order vanilla ice cream using baby talk.

Phillip goes to meet Min Ae to break up with her, but she sees right through him, and asks him about his military service, instead. He’s distracted between telling her about his time in the Marines, and trying to make up his

mind between Min Ae and Soo Kyung. When Phillip finally gets back on track, Min Ae tells him it’s her birthday, thus derailing him entirely. Phillip gives up on dumping her.

The next day, Soo Kyung gives Phillip a gift, which turns out to be a puppy. She tells him it’s so they can raise it together, but then immediately leaves. Phillip agonizes over his indecisiveness as the puppy refuses to walk. His deep thoughts are cut off by the puppy pooping. 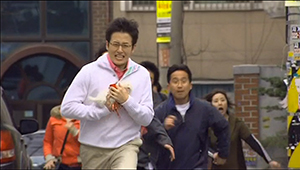 Since he has nothing to pick it up with, he drops his handkerchief over it, but is caught by a neighbourhood ahjumma. Rather than ask her for a spare trash bag, he picks up the puppy and runs away. The whole neighbourhood gets together to give chase, but he finally gets away from them, and ends up walking home across a bridge.

It starts to rain as Soo Kyung walks home, thinking about the stages of true love, which are all love. She passes by the café where Dong Wook (Lee Dong Wook) is sitting, staring out into the rain, but they fall to see each other.

It’s episode 4, and Soo Kyung and Phillip’s interactions are so forced that I’m already actively cheering for them to break up. Phillip’s feelings are obviously elsewhere, and Soo Kyung is trying so hard to convince herself that she’s still in love that it’s becoming painful to watch, what with desperation puppies and belated, awkward attempts at playing cute.

Watching Min Ae play the game with Phillip seems more natural, since they’ve just met, and she’s aware that he’s dating someone else. Watching Soo Kyung do the same (though obviously her tactics are different), looks weird, especially since they’ve been together five years, and engaged to boot. It’s obvious to any viewer that this relationship isn’t going to make it, so I really hope it doesn’t drag on for too long, because the heavy-handed musical hints every time Soo Kyung and Dong Wook pass by each other are getting to be a little much.

Also, why the heck is Soo Kyung taking relationship advice from Yu Jin and Hwan? Anyway, here’s the puppy: