Find out what happens when a hungry K-drama fan has six days to explore Seoul for the first time. And, now, Days 4 to 6 of binge eating and desperately seeking K-drama stars!

In case you missed it, Days 1 to 3 can be found in the previous Friday Feature.

We arrived at I’Park Mall seeking electronics, but needed food to keep ourselves sane. It was early enough that the restaurants were relatively empty of mall visitors, so we chose the one with the most mall employees dining in it. This turned out to be the right strategy. I chose cold buckwheat noodles, and we shared Pyongyang mandu. Both were very flavourful, and the noodles were very refreshing, though I still prefer my noodles hot.

After wandering through an electronics wasteland, we bought cold beer and snacks from a convenience store then sat on the patio out front. The experience was so nice that we lamented the fact that we could never do this back home thanks to the LCBO. Then, it was time for pork hocks at Tam Tam.

We ordered two types of pork hocks: covered in garlic, and cooked in five spices. I preferred the Traditional Five Spice pork hocks as they seemed to have more meat, and less distraction from the pork.

We headed to the Hongdae area, which is known for its hip music and arts scene thanks to its proximity to Hongik University. It is also where the “First Shop of Coffee Prince” coffee house is located. It seems that they get enough visitors as a result of the show that they feel comfortable charging ₩10,000 for coffee, and actively shooing away anyone who wants to take photos without paying for the coffee.

Hongdae also has a lot of dessert houses so after failing to get into the Peony Café due to a long line up, we settled on shaved milk ice with various toppings at Sulkuk. The ice was shredded to an unbelievably fine consistency, but I have definitely had more flavourful shaved ice before.

Having spent most of our time either eating or shopping, we decided to get some culture by visiting Changdeokgung. Much of the palace was destroyed during the Japanese occupation (1910-1945), so what we saw were largely recreations of the original. I think this might explain why the buildings had a uniformity and emptiness that made them less compelling than, say, the Forbidden City or Versailles.

What I did enjoy was the Secret Garden, a 78 acre rear park that was created for the exclusive use of the royal family. There was more variety to the landscape and recreational buildings, plus it was less crowded since visitors were only permitted to enter as part of a tour group. Like the rest of the city, exploring the park involved lots of hill climbing, though our guide reassured us that the royals were carried around in palanquins. 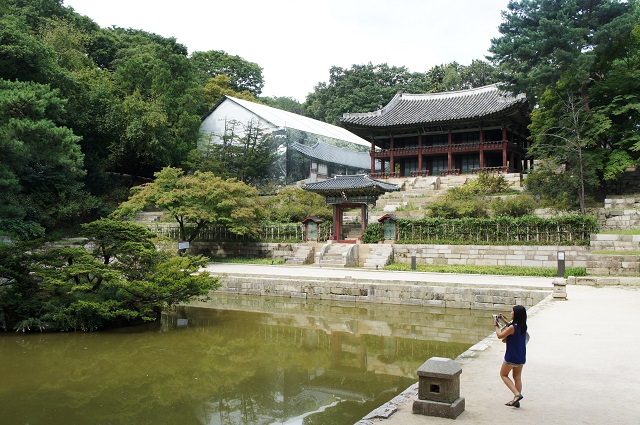 Culture feeds the mind, but not the stomach, so we decided to lunch at Tosokchon, known for its ginseng chicken. When we arrived after 1:00pm, there was a lineup that ran the length of the building. Fortunately, we did not have to wait long, since said building could accommodate many diners. The restaurant was built in the traditional style with courtyards and multiple, interconnected buildings. We had to take off our shoes when we entered the building where we were seated.

By the time my blackened ginseng chicken arrived, my expectations were quite high. Sadly, I found that dish, as well as the regular ginseng chicken, disappointing. It pretty much tasted like boiled chicken soup as it was not very flavourful. A shot of wine was provided, and following the example of locals at an adjoining table, I poured it into the bowl. This did improve the taste of the soup somewhat by adding some complexity. 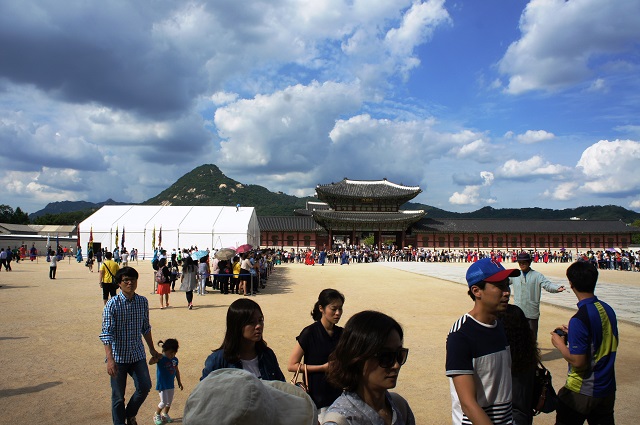 After lunch, it was time for another palace: Gyeongbokgung. We arrived just in time to catch the changing of the royal guard. As I watched the ceremony, my primary thought how hot the full robes and fake beards must be in the midday heat. Gyeongbokgung was much grander in scale than Chandeokgung, though every building started to look the same after a while. 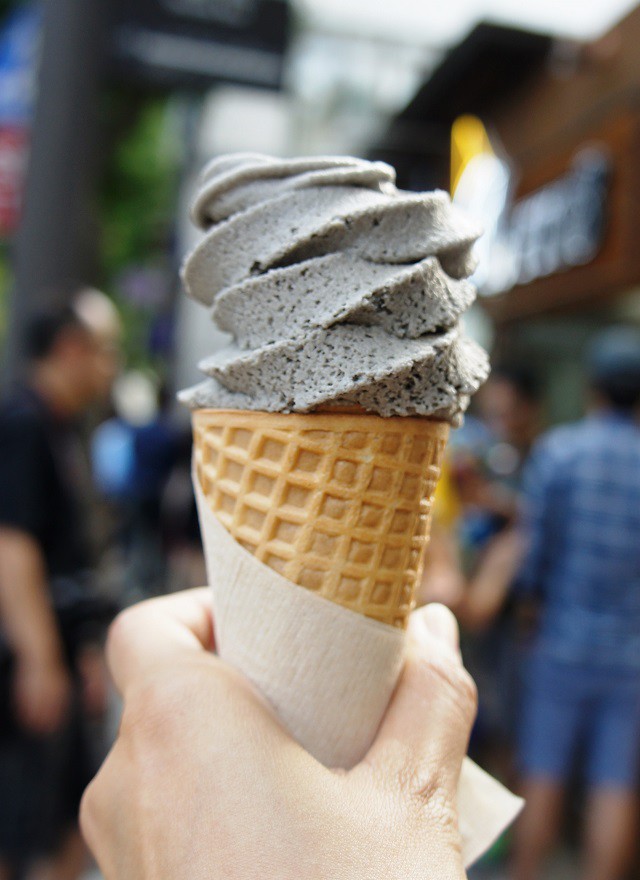 After taking a brief break for ice cream (a rich tasting black sesame) in the stylish Samcheong-Dong neighbourhood, we visited Bukchon Hanok Village, which is actually a residential neighbourhood of traditional housing. I pitied the residents as their narrow streets were clogged with tourists who occasionally left debris on their property. Signs were put up ordering tourists to keep the noise down. The houses were all very charming, though we were fascinated by the number of full-size cars parked in the narrow streets and speculated on whether residents had to coordinate with their neighbours when they wanted to drive out. 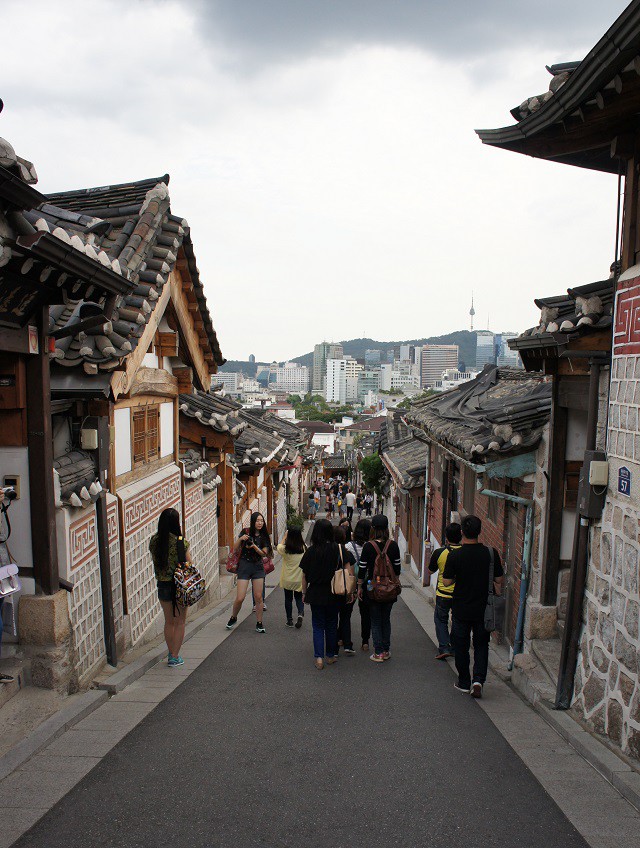 When it was time to eat again, we headed to Gwangjang Market for the food stalls. We had mung bean pancake, a pork pancake, kimbap, and kimchi mandu. The fried pancakes were surprisingly bland, and the kimchi mandu was predominantly sour. The only highlights were the plastic bottle of rice wine we had to accompany the dishes, which was sweet and went down too easily, and the fresh kimbap.

Later that night, we decided to fulfill our dream of having fried chicken and beer à la “My Love From the Stars”, the K-drama that started a chicken and beer craze in China. Perhaps not surprisingly, Jun Ji Hyun was the face of BHC Chicken, the fried chicken chain where our takeout required a 15 minute wait as it was made to order. It was delicious with a lightly seasoned skin and juicy chicken underneath. Surprisingly, the skin remained crispy after spending a night in the fridge.

Fried chicken and beer is a must. Note that BHC Chicken is endorsed by Jun Ji Hyun. #Seoul #MyLoveFromTheStar pic.twitter.com/8IKNdENUKJ — Noonas Over Forks (@NoonasOverForks) September 14, 2014

On our final day in Seoul, we visited another neighbourhood dominated by university students where we got cheap and tasty lunch at restaurant chain, Yumsem.

It turned out that the stores sold predominantly cheap merchandise so we gave up shopping in favour of sightseeing, and were thoroughly impressed by the landscape and architecture of Ewha Womans University. The first sight you see when you enter is a striking strip of metal, glass and stone cut into a charmingly manicured hill. You can find more details here.

In the afternoon, we decided to try Peony Café again, and succeeded in getting a table right away. We got a slice of chocolate banana cake, which was as divine as it sounds. The café mocha and ice choco were also very rich in flavour. As we were leaving, we were relieved to discover that we had managed to dodge the small line up that had started outside.

For our final meal, we decided that our trip would not be complete without Korean BBQ. A restaurant down the street from our apartment in Itaewon appeared to have customers every time we walked past, at all hours of the day; even mornings. The food was delicious though our BBQ skills may not have done the meat justice.

At the end of our final day, we returned to Dongdaemun for some all night shopping. It turned out that our bodies were the limiting factor this time, as backs and feet gave out before midnight.

Here are some quick tips regarding Seoul based on my six day experience:

Readers: What you would see and/or eat while in Seoul?

Keep the saliva off your keyboard as you type.