Side dish: Yu Jin went all out for her birthday party, but comes face to face with the possibility that her boyfriend is hooking up with her friend. A Double Chocolate Sour Cream Cake seems to be a fitting birthday cake reflecting the souring of the event and Yu Jin’s impending need for the comfort of chocolate. The Kitchn provides a recipe accompanied by some pretty photos.

Yu Jin (Sa Kang) approaches a podium in fancy dress. She appears to be delaying her speech in anticipation of someone’s arrival. Presumably that someone is her boyfriend, Dong Wook (Shin Dong Wook) or her friend, Soo Kyung (Lee Soo Kyung). They both burst into the ballroom, and Yu Jin and her guests stare at them until Dong Wook awkwardly releases Soo Kyung’s wrist. Before the entire ballroom, Yu Jin proposes marriage to Dong Wook. Dong Wook looks at Soo Kyung then Yu Jin before apologizing.

The story rewinds to Yu Jin reporting to her mother that everything is going well with Dong Wook. Her mother would like to speed the relationship along to its natural conclusion: marriage. She proposes that Dong Wook be introduced to Yu Jin’s family at her birthday party.

Yu Jin is afraid that having Dong Wook meet her family is premature. Her boss, Mi Jin (Kim Mi Jin) points out that she and Dong Wook met through a blind date, so the intention was always marriage, and not casual dating. Yu Jin is still feeling uneasy when Dong Wook calls to ask if she would like to go grocery shopping after work. Both Mi Jin and Soo Kyung believe this domesticity bodes well for a proposal, though Soo Kyung looks a little troubled.

While at the supermarket, Yu Jin and Dong Wook run into his friend, Hwan (Jung Hwan). Hwan’s shopping cart is filled with instant noodles, because he does not have a girlfriend to make home cooked meals. The couple invite Hwan to come for dinner prepared by Yu Jin, but Hwan has plans.

At the gym, Min Ae (Jang Min Ae) and her frenemy, Joo Hee (Ha Joo Hee) compete for the attention of the men. One of Min Ae’s boyfriends, Ryohei (Otani Ryohei) arrives looking for her and Joo Hee is quick to latch onto him. Ryohei beats a hasty retreat, and the women decide to save him for the finale of their competition. They choose instead to

start with Hwan, and see who he will call first.

Dong Wook and Yu Jin are hugging, reluctant to part for the night. They are kissing when they are interrupted by a security guard who turns out to be Joo Ho (Joo Ho). Dong Wook calls him a stalker, and Joo Ho runs away.

Yu Jin enters her apartment where Min Ae and Joo Hee are waiting. They assume she is crying, because she broke up with her boyfriend. In actuality, she simply misses Dong Wook. She calls him, and he reassures her that, very soon, they will never have to part.

Yu Jin is convinced by her mother to announce Dong Wook as her boyfriend at her 27th birthday party. Yu Jin hands out invitations at work where her co-workers are envious that the celebrations will take place at a swanky hotel.

Min Ae is shopping while Hwan fawns all over her when Joo Hee interrupts. The women quarrel as Hwan attempts to

intervene. Mi Jin suddenly steps into the fray and ends up chasing both women out of the store. She doubles back to the store in time to catch Hwan and beat him.

Yu Jin and Dong Wook are saying goodbye outside her building when Min Ae and another boyfriend, Phillip (Choi Phillip) arrive. Phillip instantly recognizes Dong Wook as the man who claimed his ex-fiancé as a girlfriend during their last encounter. Phillip instantly demands to know if Dong Wook is cheating on Soo Kyung.

Phillip grabs Dong Wook and takes his guilt over hurting Soo Kyung out on him. Yu Jin frantically questions whether Dong Wook really loves her. Joo Ho, still posing as a security guard, steps in between the men, and instantly recognizes Phillip as his sister’s ex-fiancé. Yu Jin suddently realizes that the Soo Kyung the men are referring to is her friend. Dong Wook then has to fight off Joo Ho who accuses him of cheating on Yu Jin. Yu Jin leaves in a huff and Dong Wook chases after her.

Dong Wook explains the situation, and while Yu Jin claims to understand, she is still upset and fearful of losing him. He promises never again to create a situation where he might be mistaken for another woman’s boyfriend. 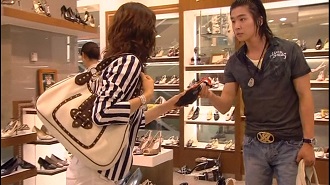 Soo Kyung is shopping and grabs a shoe at the same time as Dong Wook. They are in a state of disbelief at how often they run into each other. Dong Wook is shopping for a birthday gift for Yu Jin, and Soo Kyung warns him that only couples who are breaking up gift each other with shoes. Dong Wook calls it nonsense, but Soo Kyung thinks back to when Phillip gave her shoes right before they broke up, and Dong Wook reads her thoughts.

Yu Jin’s gift. At that moment, Yu Jin and her mother spot Dong Wook and Soo Kyung together. Dong Wook’s promise never to be seen as another woman’s man echoes in Yu Jin’s head.

It is disturbing how easily led Yu Jin is. Her mother thinks that she should introduce Dong Wook to the family at her birthday party, and that is what she does. Misunderstanding leads to Dong Wook being accused of cheating on Yu Jin, and she does not even give him the benefit of the doubt. Add her jealous streak that dictates who Dong Wook can or cannot be seen with, and Yu Jin has become a bit of a monster.

The best scenes in this episode involved group interaction thus proving that quantity does equal quality in “Soulmate”. I enjoyed the scene that saw Phillip and Joo Ho manhandling Dong Wook for the sake of two separate women. And, the quarrel between airhead Joo Hee and screechy Mi Jin, with snide interjections from Min Ae was pretty entertaining, too.

Otherwise, the scene with Dong Wook and Soo Kyung was a relief in comparison to how they related to their significant others. He wasn’t humouring her and mincing his words, and she was not trying not to hide her distaste and exasperation. They are obviously meant to be together.