I can’t tell if Soo Kyung is on board for this kiss, or if she’s dreaming of the meals she’ll have in “Let’s Eat”.

Side dish: Yu Jin intends for Dong Wook and herself to go to school on opposite sides of the continent, her in San Francisco, him in New York. She’s probably planned this out, but they can meet every so often, at the halfway point for a meal, in North Platte, Nebraska. According to Yelp, the Canteen Grille is the highest rated restaurant there.

Dong Wook drives Soo Kyung home, but with her crappy sense of direction, they get lost. He puts on some music, and it turns out to be their song. Soo Kyung tells him the story of how she dialled random numbers one day after her breakup and someone played her this song to comfort her.

Dong Wook brakes suddenly when he hears this story (good thing, because he wasn’t even vaguely looking at the road), since he realizes she’s talking about him. He walks her up some stairs to her home, where both of them realize that they’ve dreamt about the other, but before they can connect the dots out loud, Dong Wook runs off.

Back at Min Ae and Yu Jin’s apartment, Ryohei cooks a meal while being harassed by Joo Hee. She dumps wine on him, which prompts him to take off his shirt, and leave the room. Meanwhile, 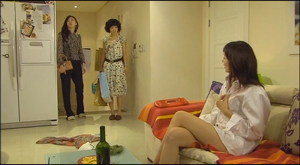 Joo Hee takes off her clothes and poses on the couch in his soggy shirt, just in time to welcome Min Ae and Yu Jin. Ryohei comes back to the room in a fresh shirt, and Min Ae tells Joo Hee she can have Ryohei.

At a café, Joo Hee begs Ryohei to give her a chance. He seems to give in when she promises to be faithful to him. Back at home, Yu Jin tries to convince Min Ae to make up with Ryohei, but Min Ae is unmoved and tells her to back off.

Dong Wook reminisces about his first date with Yu Jin over drinks and intestines with Hwan. Hwan questions whether Dong Wook and Yu Jin have a connection, which prompts Dong Wook to drink faster. Dong Wook ends up going to the stairs where he dropped off Soo Kyung, when he runs into Soo Kyung’s brother, Joo Ho (Joo Ho). Convinced that Dong Wook is there to apologize about Yu Jin, he invites him to their house, where Soo Kyung is making food and demanding beer. She’s embarrassed to see Dong Wook, but they all sit and enjoy their beer regardless.

Joo Ho gets drunk quickly and bows out, leaving Dong Wook and Soo Kyung alone together. They talk about his engagement, and he confesses that he’s finally met someone who made him believe in love and destiny. He moves in for a kiss, and Joo Ho comes back to interrupt them. Good thing he’s drunk, because it’s obvious they’ve been up to no good. 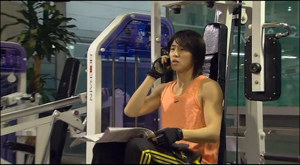 The next day at work, Mi Jin (Kim Mi Jin) and Yu Jin are ecstatic over a wedding notice in the paper, while Soo Kyung looks guilty. It turns out Dong Wook’s mother posted it to speed up the wedding. Angry at being continuously railroaded, Dong Wook insists he’ll call the wedding off.

Ryohei phones Min Ae from the airport, but she doesn’t pick up, despite flashing back to many of Ryohei’s fabulous outfits — I mean, their moments together. Joo Hee begs him to stay, but he smiles sadly and leaves to get on an airplane. Surprisingly, Joo Hee is legitimately heartbroken to see him go. 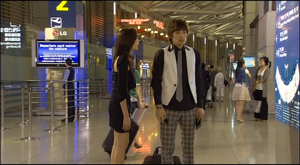 Dong Wook rushes in to meet Yu Jin, only to find her with Mi Jin and Soo Kyung. It’s super awkward, again, as Dong Wook tries to talk to Yu Jin alone, Soo Kyung doesn’t know where to look, and Yu Jin and Mi Jin are in raptures over the wedding announcement. Dong Wook looks panicked as Yu Jin talks about her plans for the wedding and their future study abroad. 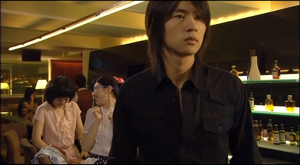 Stricken, Soo Kyung leaves the bar to go home, believing that Dong Wook was just playing with her feelings.

Having heard her thoughts, Dong Wook chases Soo Kyung out of the bar, giving Yu Jin her first hint he may not be on board with her plans. 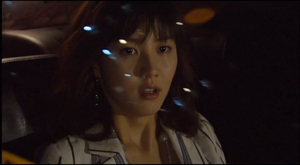 driving pays off when he gets to her house before her. It’s her dream all over again, as she finds Dong Wook at the top of the stairs. When she refuses to listen,
he grabs her wrist and desperately tries to explain his feelings and their connection. She denies he’s her soulmate, but he kisses her and she kisses him back.

Who knew it would take a wedding announcement for Dong Wook to get off this train? The pattern seems to be that whenever Yu Jin wants something, she goes ahead with it, and Dong Wook gives in to placate her, because that’s what you do with a girlfriend. The engagement is part of the same pattern, where instead of being honest with her after the party, Dong Wook simply assumed they would have a long engagement, and he could sort it out later (maybe after a workout).

I want to cheer for Soo Kyung and Dong Wook getting together, but it’s difficult, given how immaturely he acted with Yu Jin. And, while Dong Wook seems sincere in his feelings for Soo Kyung, their relationship is pretty underdeveloped, especially in regards to Soo Kyung’s feelings. Given that there’s only one more hour of this show to go, and Dong Wook has more to settle with Yu Jin, I hope they figure out a way to have a satisfying resolution. In the meantime, here’s the kiss with a view: