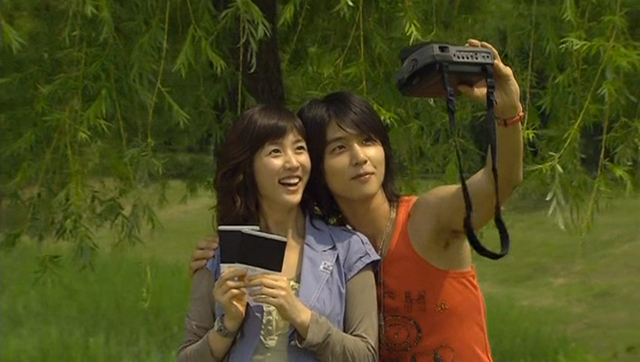 Does Dong Wook remind anyone else of David Cassidy here? No? Just me?

Side dish: There’s been a lot of intestine eating on this show, but in case you don’t like barbecued intestine, how about braised intestine? Here’s a recipe from Annielicious Food, to try if you have a lot of time, a love of intestine, and don’t mind playing with guts.

Gloomy Soo Kyung (Lee Soo Kyung) gets on a bus, and mopes about whether Dong Wook (Shin Dong Wook) really is her destiny. In a borderline creepy move, Dong Wook appears beside her on the bus, and informs her he always knows where she is (I take back the thing about borderline… that’s creepy). As they snuggle and listen to John Lennon, Dong Wook hears Soo Kyung’s thoughts again, expressing her painfully mixed feelings about him. He keeps smiling, so that she’ll stay cheerful, too.

They end up on the banks of the Han River, and the two of them have a bittersweet date, where they outwardly enjoy cavorting on the grass with a Polaroid, but inwardly, they know they’re on borrowed time. 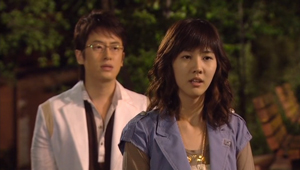 Out of the blue, Dong Wook announces that he’s going to study in the US, and asks Soo Kyung to come along. She doesn’t answer, and when she goes home, she finds Phillip (Choi Phillip) waiting for her at the top of the stairs. I don’t know what happened to the music on this show, but it’s suddenly a sad tune straight out of a classic melodrama as Phillip begs her to take him back, claiming they’re destined to be together. Soo Kyung refutes this notion, pointing out that it was easy for him to escape her, and then turns him down. She wonders in her mind, what destiny really is, if everyone keeps telling her that they’re destined to be together.

Dong Wook comes home to find Yu Jin (Sa Kang) outside his apartment. Characteristically, she refuses to accept their breakup. When he starts talking about destiny, she finally agrees to let him go. As she leaves, the elevator door closes on their tear-stained faces.

Back at the office, Soo Kyung, Mi Jin (Kim Mi Jin), and Yu Jin sit in awkward silence, until Soo Kyung hands in her resignation. The awkwardness carries on to Soo Kyung’s leaving party, where Soo Kyung is universally ignored by her colleagues. The barbecue intestines remind Yu Jin of her first date with Dong Wook and she breaks down, begging Soo Kyung to send Dong Wook back to her. Soo Kyung can’t say anything but sorry, as a whole lot of intestines go to waste on the table.

Hwan (Jung Hwan), Ryohei (Otani Ryohei), and Dong Wook have a drink to toast Dong Wook’s trip to America. Hwan mentions that he feels bad for Yu Jin, then goes on about how he’s fallen for Mi Jin’s dubious charms. When Hwan asks if Soo Kyung will really go along with him to America, Dong Wook confidently answers that she will. Soo Kyung, for her part, contemplates their Polaroids.

Joo Ho bursts into her room to dispense some wisdom about being happy, but Soo Kyung still looks sad.

The next day, Soo Kyung meets Dong Wook at the airport, but gives him back the ticket. She tells him that she believes in destiny, but isn’t sure if they’re destined to be together. She walks away, and Dong Wook makes a move to stop her (since she’s walking away at a snail’s pace), but is stopped by her thoughts; she’s sad, but feels she has to let him go. He laments that their telepathic connection has made it impossible for him to go after her. Convinced that they’ll meet again, he gets on the airplane.

Three months later, Soo Kyung is back at the airport to go study abroad in Japan. Mi Jin is there to say goodbye, and Yu Jin shows up unexpectedly. Everyone hugs, and all is right with the world again.

Hwan and Ryohei watch a videotape sent by Dong Wook. Dong Wook tells them that he’s doing well, and asks Hwan how it’s going with Mi Jin. Hwan has a flashback to their disastrous first attempt at getting physical, where he

discovered Mi Jin’s true age (40, and he’s 32. The horror!). I’m pretty amused when he starts calling her noona, then runs away from her, but I wonder why he’s hung up on the age difference when she’s just plain scary.

Dong Wook asks Ryohei about Min Ae, and he flashes back to Min Ae failing at hitting on a guy at a bar. Joo Hee (Ha Joo Hee) mocks her and points out that Min Ae’s love for Ryohei is causing her to fail. Min Ae denies that she has feelings 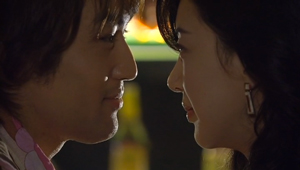 (shades of “I Need Romance 3”), but when Ryohei magically makes his entrance, she gets teary-eyed, then moves in on him. She asks if she can taste it (his drink, I assume), and he agrees, smiling.

Dong Wook wonders about Joo Ho next, which prompts us to look in on Joo Ho harassing Yu Jin. He’s interrupted by the entrance of Joo Hee, who turns out to be his elementary school classmate, where he was the most popular kid in school.

They relive their childhood memories by dancing, only to be interrupted by Yu Jin speculating as to how he became so ugly when he was so cool in elementary school. Yu Jin runs off to wash her mouth out with soap as Joo Ho and Joo Hee continue dancing.

Back to the video, Dong Wook wonders if he should come over to visit them, since he misses them so much. He surprises them with the news that he’s now studying in Japan. Ryohei and Hwan wonder if he’ll meet Soo Kyung in Japan, but as if on cue, Dong Wook asks about her, and says that they’ll meet again, if they’re meant to. The episode ends as he runs off into the Tokyo street.

Hate me if you want to, but I’m glad we got this open ending. Given the short time that Soo Kyung and Dong Wook spent together, it would have been difficult to believe they would connect so easily, destiny or no destiny. A possible connection in Japan where they can get to know each other without all the drama seems like a pretty nice way to go.

My only quibbles are that Min Ae and Ryohei’s story was pretty thin, and the music suddenly went full-on melo for much of this episode. But hey, it was a good resolution, so whatever, I’ll take it.  Also, Joo Ho and Joo Hee dancing together was pretty awesome.