Upon entry, diners are met with a wall of photographs featuring both Korean and western celebrities posing beside the Korean Village Restaurant proprietress. The restaurant itself is dated with green carpeting and huge potted plants in window. However, I was willing to forgive the decor if the food was excellent.

We ordered beef rib and pork belly for Korean BBQ, which turned out to be the highlight of the dinner. The meat was obviously of good quality as it was very flavourful. 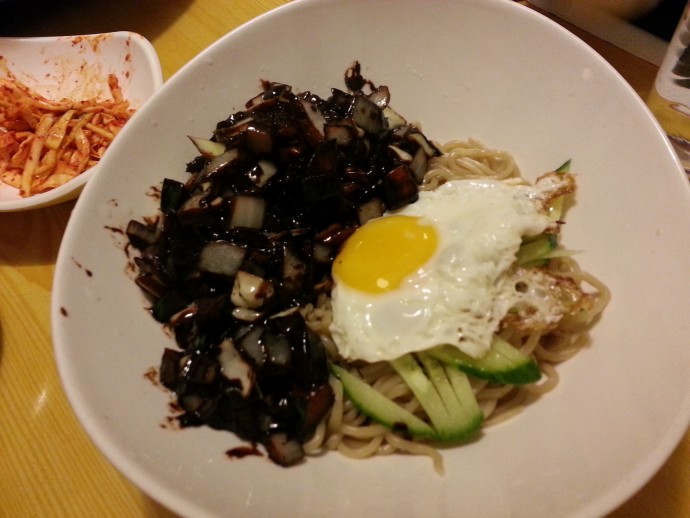 The low point of the meal was the black bean noodle with fried egg. It was so bland that we were convinced the cook had forgotten to add salt. Also a disappointment were the fried mandu. The dough exterior was not crispy, but instead, chewy possibly from oil retention. It also had a flavour and texture reminiscent of bread. I found myself dousing the mandu in vinegar to add some flavour.

The seafood pancake was middling in that it looked like a mess and tasted oily, but actually tasted considerably better than it looked. The seafood embedded in the pancake appeared to be fresh, and not sapped of flavour from freezing.

Korean Village Restaurant is pricier than the average Korean restaurant, so we were surprised when we were told that a second helping of the side dishes would incur a $10 charge. Our server then informed us that we would not have to pay the extra cost, since we had ordered so much food. I think it was supposed to be a gesture of good will, but it felt like condescension, since a majority of other Korean restaurants will provide side dish refills for free.

At the end of the night, the server surprised us with chocolate ice cream flavoured mochi, which was nice. Unfortunately, it was not enough to erase my dissatisfaction with the black bean noodle and the mandu.