Side dish: No one had time to eat in this episode, so this recipe suggestion will be a non-sequitur: Turn Your Pasta Into Ramen With Baking Soda.

Office intern, Jang Geu Rae (Im Si Wan) leaves for work at the crack of dawn. The early bird may catch the worm, but Geu Rae notes that he is always playing catch up to someone who is up and working before him. 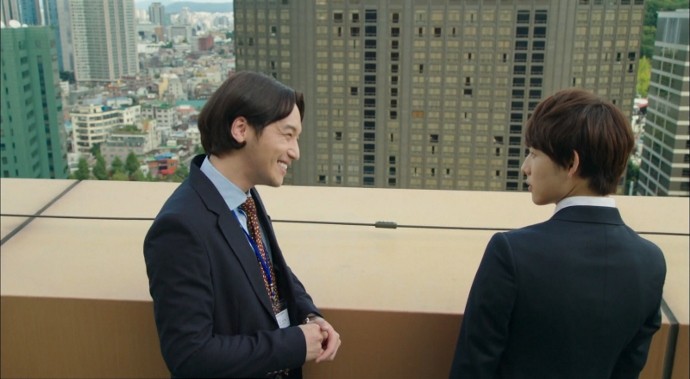 Geu Rae decides to partner up for the presentation interviews with born used car salesman, Han Suk Yool (Byun Yo Han). Little does Geu Rae know, Suk Yool has a reputation of being a pervert. However, Geu Rae quickly finds out that Suk Yool has no intention of doing his share of the work.

Sole female intern, An Young Yi (Kang So Ra) had hoped to partner up with Geu Rae, but finds out from fellow intern, Jang Baek Ki (Kang Ha Neul) that she has been rejected. She is left at the mercy of the only intern willing to work with her, Lee Sang Hyun (Yoon Joon Hoon), who casually engages in unwanted touching, and is willing to plagiarize previous presentations. 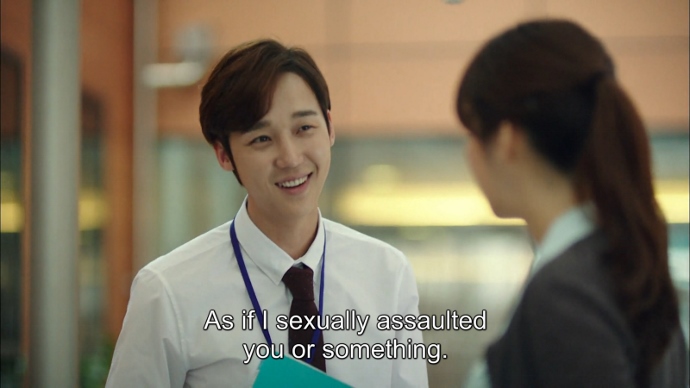 Geu Rae continues to be in an upbeat mood when his boss, Oh Sang Sik (Lee Sung Min) and assistant manager, Kim Dong Sik (Kim Dae Myung) arrive at work. Geu Rae is still in the afterglow of the night before when Sang Sik defended him and claimed him as part of his team. Unfortunately, Sang Sik was very drunk, and has forgotten everything; he bluntly admits to Dong Sik that he wishes to see Geu Rae fail.

Unaware of Sang Sik’s hostile attitude towards him, Geu Rae continues to work hard. He memorizes an entire dictionary of trade industry terms and acronyms in three days, a skill that hearkens back to his previous life as a Go competitor. Sang Sik and Dong Sik are secretly impressed. Geu Rae’s attempt to give a tired Sang Sik a shoulder massage is less successful.

Meanwhile, Geu Rae tries to engage Suk Yool in the presentation, but the intern readily gives flippant criticism without actually suggesting any solution. However, with his regrets over having quit Go, Geu Rae is not ready to give up and works tirelessly on his own. 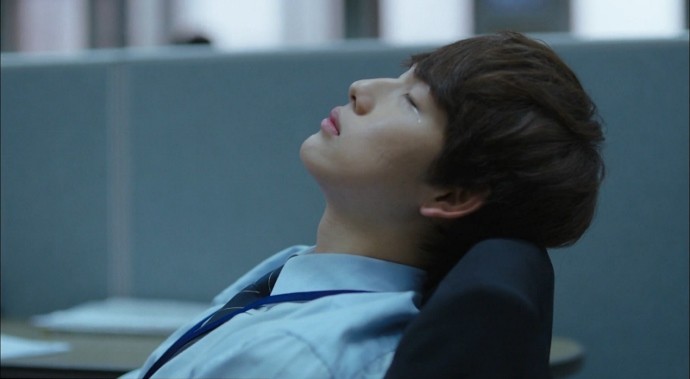 Young Yi finds herself acting awkwardly around Geu Rae after realizing he rejected her as a partner thinking she had the same ulterior motive as everyone else. After catching Geu Rae crying in his sleep at his desk, Young Yi feels compelled to take him aside to clarify her intentions. They quietly bond over the uncooperative and lazy partners that they have both been saddled with.

Sang Sik decides to proceed with a project that was previously rejected by the executive director. It is approved by the manager, and Sang Sik tasks Dong Sik with completing the project. Unfortunately, Dong Sik makes a mistake. He and Sang Sik are left scrambling to prevent the contract from being annulled, heedless of the expenses that will be incurred in the process. Despite the tight deadline, Sang Sik refuses to accept help from Geu Rae. 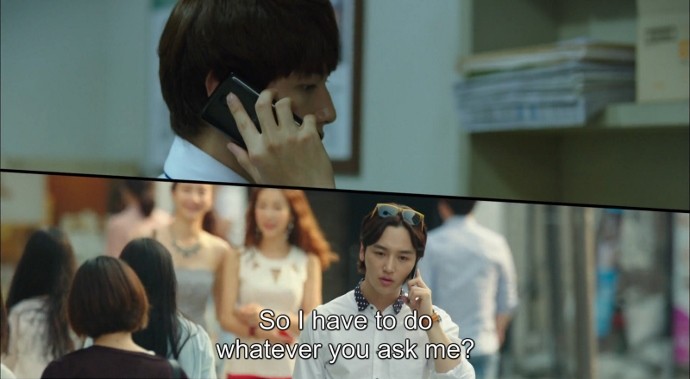 Geu Rae’s project is stalled by Suk Yool’s refusal to come to a decision regarding their presentation. When he is summoned by a desperate Sang Sik to the Ulsan warehouse to help out, Geu Rae is able to confront Suk Yool in person after witnessing Suk Yool sexually harass a female employee then get slapped.

Sang Sik finds himself reluctantly helping Geu Rae out, in spite of himself. He takes the time to quiz Geu Rae on the trade terms from the dictionary, and appears to be bothered by seeing Geu Rae victimized by his presentation partner. Sang Sik cryptically advises Geu Rae to approach Suk Yool like a tornado, and to aim for the calm center. Geu Rae interprets the advice as having to accept that he is the loser in his partnership with Suk Yool, and to focus on the goal of succeeding. 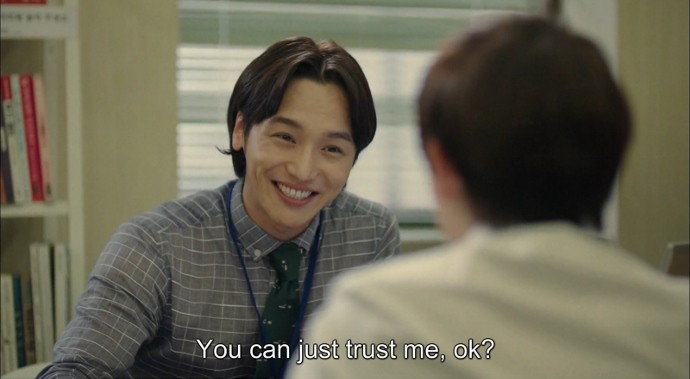 Sang Sik and his team manage to save the contract. However, disciplinary action is taken against Dong Sik for incurring the additional expenses in the process of fixing his mistake. Sang Sik realizes that Dong Sik will pay for his decisions. In particular, his stubborn insistence that they proceed with a project that had been rejected by the executive director.

Sang Sik attempts to defend Dong Sik, but it becomes clear that the surest way to save Dong Sik is to ask for the intervention of the executive director. Because Sang Sik is at odds with the executive director, his pride prevents him from asking for this favour. Unbeknownst to Sang Sik, Geu Rae overhears his dilemma.

As Geu Rae puts the finishing touches on their presentation, Suk Yool attempts to make a last minute contribution by correcting a single phrase to demonstrate how invaluable he is. 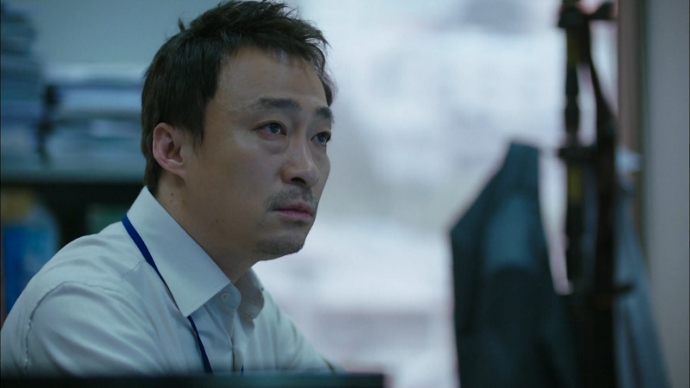 Sang Sik disgustedly asks Geu Rae why he allows himself to be walked all over by Suk Yool. Geu Rae references Sang Sik’s earlier analogy of comparing Suk Yool to a tornado, and explains that he is just trying to get into the tornado’s calm center. Geu Rae gives Sang Sik veiled advice to subsume his pride in order to help Dong Sik survive.

Sang Sik slowly warms up to Geu Rae and demonstrates it in unexpected ways. He hilariously trips Suk Yool then blames the accident on the intern’s weak legs. He also gives Geu Rae presentation advice, as Geu Rae stares in stunned silence. 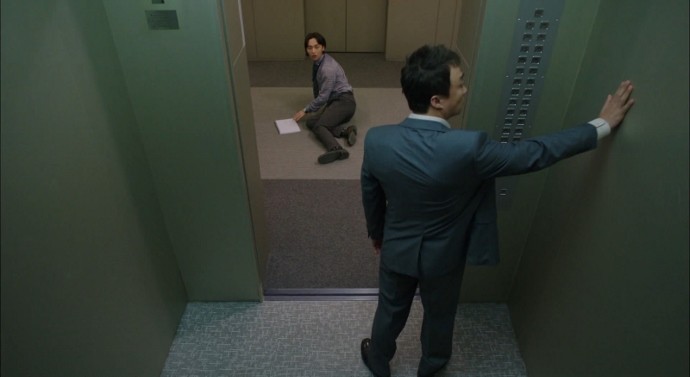 Geu Rae takes Sang Sik’s presentation advice to Suk Yool who is dismissive. When Suk Yool disrespects Sang Sik, Geu Rae loses his calm and punches Suk Yool in the face. They end up coming to blows when they are interrupted by a text message with their second assignment: they must come up with an item to sell to their partner and explain why. Suk Yool and Sang Sik glare at each other’s bloody faces.

I really enjoyed this episode! It was satisfying to see Geu Rae begin to demonstrate the considerable skills he developed as a Go player. And, while Sang Sik holds on to his resentment against the intern, he is allowing himself to be won over by Geu Rae’s quiet persistence and hard work.

What I liked the most about this episode of “Misaeng” is how nothing is forced. Geu Rae was not subject to abject humiliation in order to develop a back bone and confidence. It takes a few uneventful encounters before Young Yi musters the courage to set the record straight about her intentions. Even Baek Ki is simply a persistent presence who tries to help out, but without emotional commitment.

I found Im Si Wan’s acting in this episode less irritating. Perhaps it is because his character is becoming more proactive and standing up for himself. His earnest poker face versus the haggard irritation of Lee Sung Min has been quite entertaining.