Side dish: I’ve always liked the thought of ochazuke, though I’ve never tried making it. If the idea of pouring green tea over your rice sounds appealing, why not pack it up for lunch? Here are some suggestions from dosirakbento on how it’s done.

We’re straight back to the end of the last episode, with Nam Da Jung (Kim So Eun) giving away her winnings to pay off the debt of her former teacher, and Ha Woo Jin (Lee Sang Yoon) paying her forfeiture fee to creepy show host Kang Do Young (Shin Sung Rok). Do Young invites Woo Jin to join the “Liar Game” reality show himself, with the promise he’ll find out the real circumstances behind his mother’s death.

Da Jung gets a lecture from “Liar Game” producer, Lee Yoon Joo (Cha Soo Yun) for being stupid enough to give her money away. Yoon Joo warns Da Jung that the game is only going to get harder, then reassures her she’ll help her get in touch with her father. Da Jung goes home to mope with the photo of her father. Her father does the same when he sees her on screen as the show airs all over the country. 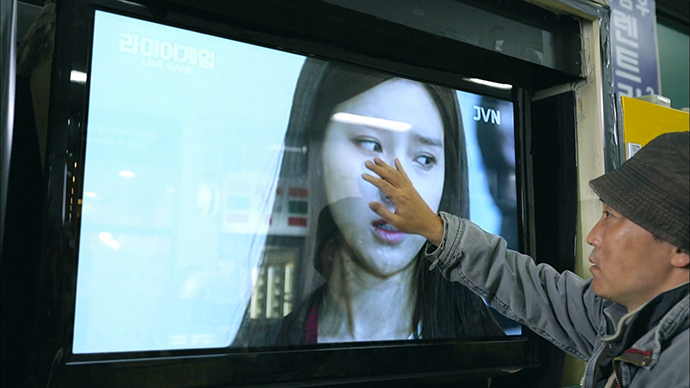 Da Jung goes drinking with her loan shark and friend, Jo Dal Goo (Jo Jae Yoon). Dal Goo drinks himself into a stupor, just as Woo Jin walks in to berate her for continuing with the game when she promised she would quit. Da Jung explains that she could relate to her teacher’s torment, but Woo Jin tells her she’s more of an idiot than he thought, and walks away.

At a gossip news network, Goo Ja Young (Choi Yoon Soo), a reporter, points out that the “Liar Game” show seems fishy, that it’s all a little too convenient. Her editor is gleeful at the possible headlines, and tells her to go get the story. 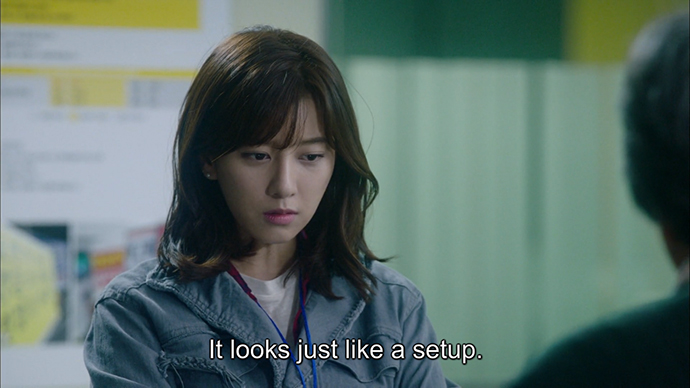 Speaking of convenient, Ja Young gets a phone call from Woo Jin. They meet on the rooftop where his mother committed suicide so she can hand over some information, and he promises her the inside scoop on “Liar Game” in exchange. He goes back to his crappy apartment and considers joining “Liar Game”.

Back at jvN, Yoon Joo and Do Young are watching a news broadcast condemning “Liar Game”. Director Jang (Choi Jin Ho) calls them in, wondering what they’re going to broadcast next, having already brought in a convict, and broadcast a man being beaten by creditors. He tells them he’s under pressure to cancel the show, and to discipline Yoon Joo, but Do Young cuts to the chase, and asks him the condition for continuing to air the show. Turns out Director Jang has a contestant whom he’d like to win the game.

After making the deal, Yoon Joo and Do Young discuss “Liar Game” over drinks. Yoon Joo asks Do Young’s reasons for starting the game, and he tells her he wants to build a modern Colosseum. When Yoon Joo wonders if the Colosseum wasn’t what brought down the Roman Empire, Do Young urges her to film the fall of the empire when it happens.

Back at the coffee shop where she works, Da Jung’s presence is bringing in the customers and the media, who wonder whether Woo Jin will continue to help her. When she tries to call him, she’s circumvented by a phone call from “Liar Game”, informing her of when to be in the studio. Like an idiot, Da Jung cuts the call off before she hears the penalty for forfeiting.

As they film the next episode, Do Young announces that there are now 22 participants in the game, with Woo Jin being the latest to join. Da Jung is happy to see him, until Woo Jin points out the obvious: they’re now opponents. All the players get on a bus together, and Da Jung sits with a female contestant. They bond over making it to the second round, then learn about a new contestant named Betrayer X, a player who joined the game by betraying a player they were assisting. Da Jung looks around nervously, wondering who it is.

When they arrive at the conference centre, their cell phones are taken away and replaced with phones from the game. The rules of the next game, Minority Vote, are explained by Do Young via video link from the studio. A player asks a yes or no question, everyone answers via a ballot box, and whoever is in the group with the higher number of same answers is eliminated. The game continues until all but one are out. Da Jung is confident when they start a practice game, and only afterwards realizes the game is harder than she thought, since lying is allowed.

The first question is “I have killed a person.” They’re given two hours to make alliances, and come up with an answer.

Back at the studio, Director Jang expresses his distaste for swindler Woo Jin, while Yoon Joo keeps her mouth shut at this hypocrisy coming from someone who wants to fix a multi-million dollar game.

Back at the conference centre, a gangster type attempts to introduce himself to Woo Jin, and fails, while Da Jung and her new friend wonder what to do. The other players, including a has-been actor, a fortune-teller, and the aforementioned gangster try to influence the results with limited success. As Da Jung contemplates her situation, Woo Jin approaches her to make a temporary alliance. Since the other players are staying away from him, he convinces her to find other people to join a team that can win the game. In this case, her stupidity is an asset, since she appears to be trustworthy.

Woo Jin watches as Da Jung approaches people to make alliances, and vetoes the ones he doesn’t like. He starts analyzing the various players, including a smarmy guy who claims to be Betrayer X. When Da Jung goes in to the locker rooms, she’s followed in by the gangster, who threatens her with violence for not including him in her plan. Her new friend jumps out of nowhere to protect her, and dares the guy to attack her instead (maybe because it would disqualify him?), but they’re interrupted by the arrival of Woo Jin and a cameraman. 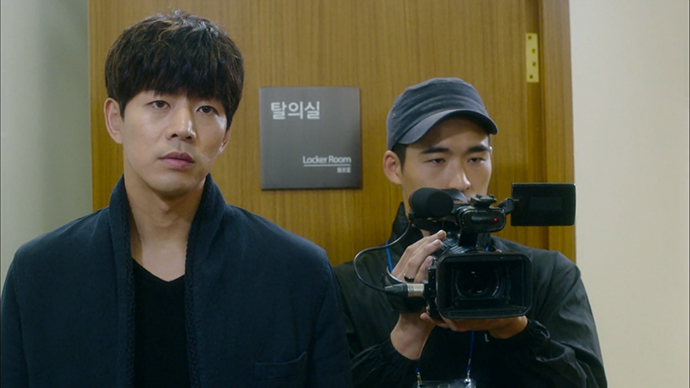 They form a team in the security room of the conference centre, with the has-been actor, the fortune-teller, the lawyer, the smarmy guy, Da Jung’s new friend, and the unemployed guy. The smarmy guy announces to everyone that he’s figured out who Betrayer X is, and points out a guy wearing sunglasses. Woo Jin outlines his strategy, which is to split the team’s votes leaving only one survivor, who will split the earnings between the rest of the team, allowing them all to survive. Everyone agrees, but they decide to make a contract to seal the deal.

When the lawyer goes to draw up the contract, he’s spotted by the gangster, who follows him to the security room. With some luck and subterfuge, they manage to put the gangster off.

As soon as he leaves, the contract is signed. Woo Jin then takes everyone’s cell phones and switches them around so that they can no longer send messages or make phone calls. I’m not sure, but it looks like Da Jung’s new friend never handed in her phone.

Everything goes as planned when they get to the vote, but Woo Jin is suspicious that no one seems concerned about being eliminated, and wonders if there’s another team. The next questioner turns out to be the sunglasses guy. He goes to the front of the room and announces his question: “I’m Betrayer X”, and the episode ends.

If I had detailed all the significant looks and all the behind-the-scenes intrigue, this recap would have been twice as long. Suffice it to say, even though the players are basically isolated in a conference centre for the whole episode, the tension was high. By framing the Liar Game as a reality show, the added pressures of the ever-present cameras somehow bleed on to the actual show we’re watching. It’s a very clever trick.

While Da Jung hasn’t substantially grown on me, the action is distracting enough that I’m able to ignore the annoyance. If it actually turns out that her wide-eyed innocence is a ploy, I will be actively cheering. If not, well, here’s hoping she learns something by the end of the show so I don’t have to tear my hair out.

At the moment, Woo Jin’s story isn’t nearly as interesting as Do Young’s unclear motivations. Bringing down the empire sounds like a more gripping story than Woo Jin’s straightforward revenge tale, non?

I’m pretty curious as to what happens next, so on to the next episode! 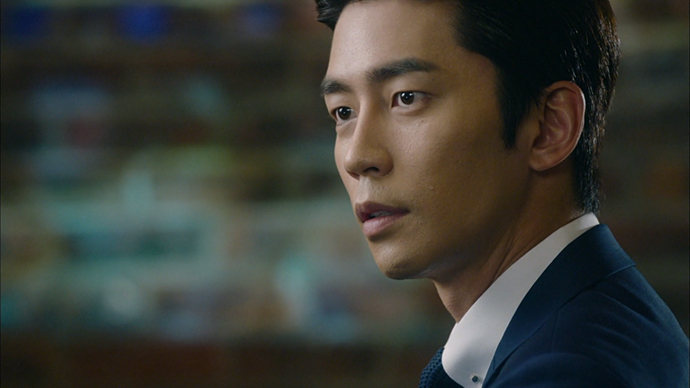