Side dish: Nothing complements a K-drama like Chinese pastry (lie). If you’re in Toronto and in the mood for Chinese pastry, the only place to go is Chinatown (lie), so here’s a useful rundown from Serious Eats of the kinds of pastries you can pick up in a Chinese bakery (truth).

It is the second round of the Minority Vote Game, and the next questioner is Choi Sung Joon, who claims to be Betrayer X. More alarmingly, genius ex-con, Ha Woo Jin (Lee Sang Yoon) realizes that his strategy may have been foiled by Betrayer X. He and the remaining contestants have one hour to decide whether to vote ‘yes’ or ‘no’ to Choi Sung Joon’s question.

Director Jang appears to have taken over control of “Liar Game” by inserting his ringer, Betrayer X. However, creepy host and show co-creator, Kang Do Young (Shin Sung Rok) appears confident that Woo Jin will be up to the challenge.

Woo Jin and good natured idiot, Nam Da Jung (Kim So Eun) steal away so that Woo Jin can explain why his plan has gone to pot. Betrayer X may have created three teams out of the 21 other contestants, thus ensuring that he will remain in competition no matter which team wins. It also means that Betrayer X is part of their own team.

Woo Jin enlists the members of their team who are out of the competition to tail their competing teammates. The lawyer will watch over the political assistant, the fortune teller will watch the nervous middle aged man, and the washed up actor will watch awkward Jung Ah. Da Jung is tasked with monitoring the CCTV to see who attempts to make contact with the other competitors, while Woo Jin will confirm with Sung Joon regarding his Betrayer X identity. 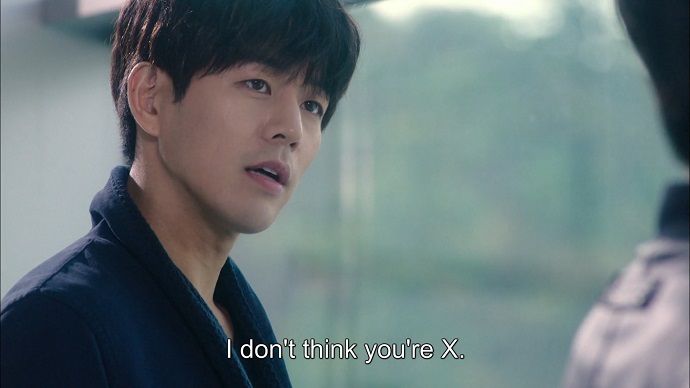 Woo Jin tells Sung Joon that he does not believe that he is Betrayer X, and tries to get him to take off his sunglasses. Sung Joon refuses, and scoffs at the idea that Woo Jin knows his entire plan before walking away.

As all eight members of Woo Jin’s team congregate, the ones who were tailing the competing competitors all indicate that nothing has been revealed. Da Jung’s surveillance of the CCTV does not yield any clues. Woo Jin must accept that Sung Joon may indeed be Betrayer X. Da Jung is satisfied that her faith in their teammates has been restored. 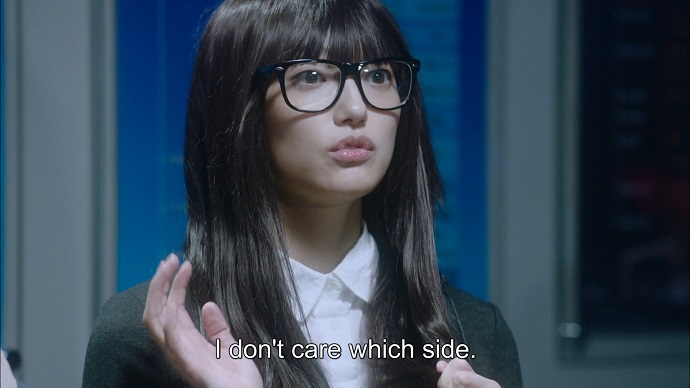 Woo Jin’s team must decide who will vote which way. Only Jung Ah seems indifferent to whether she takes the ‘yes’ or ‘no’ vote. In the end, it is decided that Woo Jin and Jung Ah will vote ‘yes’ and the other two will vote ‘no’. After the votes are tabulated, Woo Jin and Jung Ah are on the winning minority team along with Sung Joon and a female contestant.

Right before the next questioner is chosen, Bulldog the gangster angrily confronts Sung Joon, and dislodges his sunglasses while assaulting him. Suddenly, Sung Joon looks more frightened than threatening.

The next questioner is Jung Ah, and she hesitantly states that she will be the last person standing. This time, the vote will take place in 30 minutes. The contestants scatter, and Woo Jin simply tells Jung Ah that he will vote ‘no’ then gets up to leave. Woo Jin tells Da Jung that he still thinks that Sung Joon holds the key to winning.

For the final vote, Do Young helicopters in to personally oversee the count. Only a three to one result will determine a winner. Do Young asks Sung Joon to reveal if he is really Betrayer X, and Sung Joon chooses not to answer. With only Woo Jin’s vote left to be revealed, it appears that Jung Ah has the minority vote. Do Young milks this tense moment by having Jung Ah send out a tearful message to her mother. Do Young then asks Woo Jin how he feels since he knows the vote result, and Woo Jin simply claims that he and Jung Ah have won. 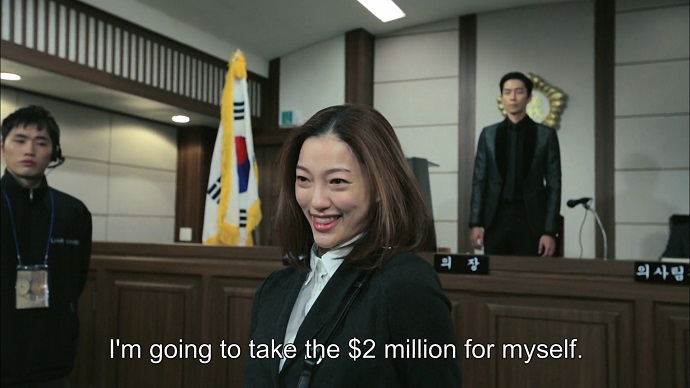 Jung Ah’s sobs turn to cackling and jeers at all the competitors who believed that she was on their team. She whips off her ill-fitting glasses and wig, and reveals that she is Betrayer X. Jung Ah, now called Jamie, singles Da Jung out and bullies her for her sweetheart act. That is when Da Jung states she already knew who Jamie really was. Do Young looks delighted throughout the proceedings.

As the wheels in Jamie’s head turn, Woo Jin’s vote is revealed to be ‘yes’ and his teammates erupt into cheers. Jamie is furious at being lied to (!) by Woo Jin about the way he was going to vote. Woo Jin then outlines all the little tells in Jamie’s disguise, and even manages to figure out that Jamie used coffee cups to communicate with her other team members regarding which way she would vote.

A final round is required due to the tie, and Woo Jin is selected as the questioner. Woo Jin’s question is, “The most important thing in life is money.” He decides to reveal his ‘no’ vote to everyone. Jamie screams in frustration as the 10 minutes until voting counts down. In order for the three remaining contestants to defeat Woo Jin, they would need to work together, with two sacrificing themselves for the third.

Sure enough, Jamie attempts to lure Sung Joon and the female contestant into a partnership. The three of them argue right down to the last minute, when Sung Joon decides that he will vote ‘no’ and grabs the ‘yes’ cards of the two women to vote on their behalf. However, when the tally is made, Woo Jin is the winner. Do Young asks a confetti covered Woo Jin to explain the secret to his success.

Woo Jin used the morally flawless Da Jung to reach out to Sung Joon, who was suffering under the stress of being perceived as Betrayer X. Woo Jin then stepped in recruit Sung Joon into their team. As agreed, Sung Joon swapped out his ‘no’ card to ensure that Woo Jin won.

The money is marched in, and a raging Jamie is escorted out with one strike against her for acting violent. However, before Do Young can hand the money out, the Director calls to intervene on behalf of Jamie, convinced that she should stick around for the sake of ratings. Do Young hangs up with a sigh, then smiles.

Jamie is placed in the same temporary holding cell as the other contestant who committed a violent act, Bulldog. Bulldog is about to commit a violent act on Jamie for betraying him when she confidently predicts a change in her favour, and says that she will save him.

Do Young announces that Jamie’s contracts with the numerous contestants are still valid, thus giving her claim on the money Woo Jin has won. Woo Jin offers up his share of the money to Sung Joon, as Da Jung stares adoringly at him, and Do Young laughs to himself.

Jamie marches happily back to claim her share of the winnings, and gives a single stack to Bulldog, thus ensuring that he moves on in the competition along with the rest of the competitors who won money. The ousted contestants beg the winning contestants to reinstate them the same way Jamie did for Bulldog. It looks like Da Jung might cave in, and give her money away, again. This time, Woo Jin smartly keeps a hand on Da Jung and drags her away. 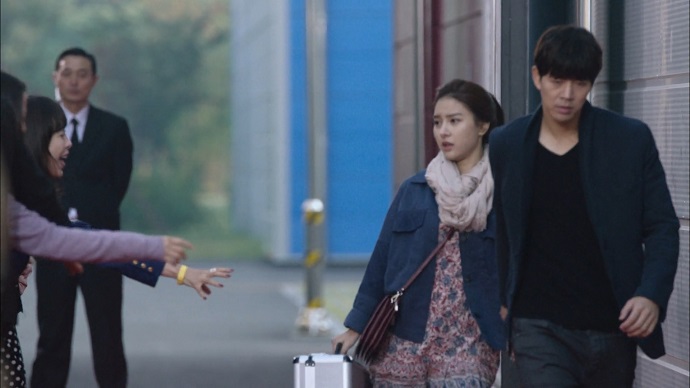 Speaking in private with Woo Jin, Da Jung proposes that every participant agree to share the prize money so that everyone wins. Woo Jin wipes the grin off her face by telling her that her plan is impossible, because it would take only one person to betray them all. Da Jung accuses him of being negative, and Woo Jin points out that “Liar Game” exists, because the world is not as trustworthy as her. Da Jung asks Woo Jin why he can’t trust anyone, and why he is competing if not for money. Woo Jin just tells her to mind her own business. 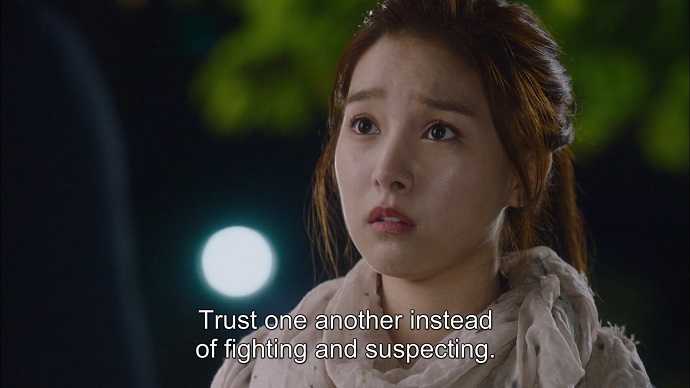 Da Jung calls her loan shark friend, Jo Dal Goo to announce the good news of her $250,000 win. Dal Goo suddenly hangs up to hide Da Jung’s winnings from his boss, but it turns out that his boss watches TV, and beats him for protecting the girl.

Dal Goo shows up with cuts and bruises at Da Jung’s home. He continues to show concern for her when he finds her front door unlocked, and worries that Woo Jin was mean to her. Dal Goo watches as Da Jung does a poor job of securing her money. He tries to convince her to pay off her debt with the money that still technically belongs to the TV station. When it turns out that Da Jung has fallen asleep, Dal Goo gives in to temptation, and runs away with the suitcase.

Da Jung sleeps soundly, blissfully ignorant of Dal Goo’s betrayal. Meanwhile, Do Young sips wine at home and smiles to himself. Woo Jin is walking down an empty street when he senses a disturbance in the force, and turns around.

It did not take the genius of Woo Jin to see that Jung Ah was wearing a shoddy disguise. For viewers, at least, it looked probable that the overly awkward Jung Ah was the actual Betrayer X. Sure enough, Jung Ah is whipping off the glasses and wig, and reveals herself to be an attractive, cackling witch.

Meanwhile, Da Jung’s sweetheart act is becoming just as cartoonish. Woo Jin should start questioning whether Da Jung is the true ringer, because no fully functioning adult can be so naive.

As Da Jung, Kim So Eun’s face seems to be stuck on deer in the headlights. Meanwhile, Lee Sang Yoon has demonstrated the entire spectrum of scowling playing Woo Jin. I must commend some of the supporting actors for keeping things from veering into the ridiculous. The warring emotions felt by loan shark, Dal Goo Jo as he decides to betray someone who he has come to care about was perfectly conveyed by Jo Jae Yun. Shin Sung Rok has been entertainingly creepy and ambivalent about the amoral choices being made regarding the show.

I am relieved that Da Jung’s wide eyed innocent act is only a side show to the intrigue of the game. Though I saw Jung Ah coming a mile away, a myriad of questions kept me on the edge of my seat. How was Jung Ah pulling off her scheme? Would Woo Jin figure her out? How would he foil her? Kudos for making me care about the story, if not for the lead character.