Side dish: Sales Team 3 bond over soju and some bowl of cheesy goodness. I cannot say for certain what dish they were enjoying, but maybe it was Corn Cheese? A super easy Corn Cheese (콘치즈) Recipe can be found at Simple & Delectable. 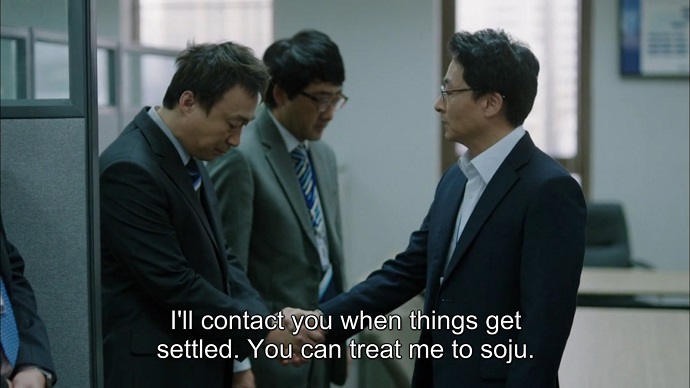 Casualties of the scandal include many of the Executive Director’s men, who are demoted to other departments. However, the one that Sales Team 3 chief, Oh Sang Sik (Lee Sung Min) regrets is Director Kim. The man who has been his mentor from the beginning of his career at One International is forced to resign.

Much to the chagrin of the Executive Director, Sang Sik is promoted to Deputy Head and the entire Sales Team 3 receives a bonus, delivered personally by a company bigwig. Though their colleagues applaud them during the presentation, Sales Team 3 become pariahs for creating such a fuss and profiting off of misfortune.

Rumours about Resource Team lackey, An Young Yi’s (Kang So Ra) attempt to truck in cargo by herself are circulated by the gossipy colleague who helped her, Han Suk Yool (Byun Yo Han). The feat actually manages to impress her boss, and compels her supervisor, Mr. Ha to finally give Young Yi a project to work on.

Meanwhile, humbled Jang Baek Ki (Kang Ha Neul) reluctantly submits to his supervisor’s exercise in being succinct and precise in his reports. He is given some text on a piece of paper to edit down, and spends the entire episode puzzling over it like a riddle. When Baek Ki finally presents it to his supervisor, he is rewarded with only one correction. Baek Ki fights to suppress a smile as he gets back to work. 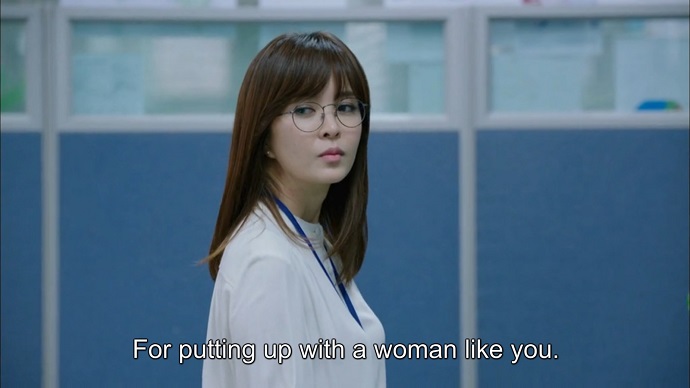 Until Director Kim’s successor arrives, misogynist Mr. Ma fills in, bullying members of the sales team with nonsensical terms and unnecessary certification. The lone female manager in sales, Sun Ji Young (Shin Eun Jung) is forced to confront Mr. Ma, and school him on the finer points of product certification. When Mr. Ma resorts to a personal attack, Ji Young simply informs him that a second sexual harassment suit will not result merely in a pay cut.

The tidy and proper Mr. Chun arrives before his term with Sales Team 3 begins in order to set up a meticulous work station. Right away, it is obvious to Geu Rae that Mr. Chun does not fit in with the messy and informal Sales Team 3. 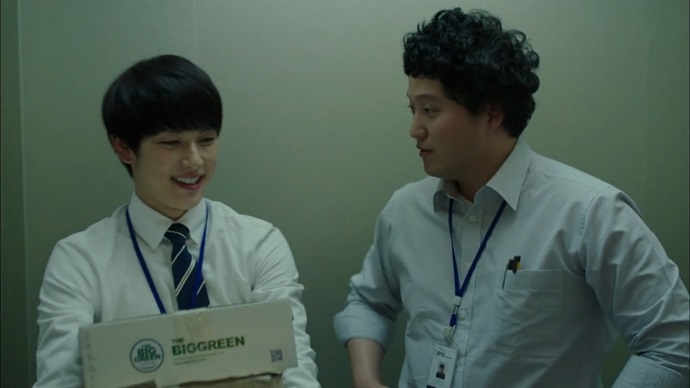 Geu Rae and Dong Sik have become more informal with each other ever since Geu Rae brought Dong Sik home for dinner. Dong Sik compliments Geu Rae on his memory then smoothly transitions into a scolding over his inability to remember trade principles. After learning of Baek Ki’s report writing exercise, Geu Rae petulantly asks why Dong Sik has never helped him improve his reports. Dong Sik assures Geu Rae that he will give him report writing exercises until he vomits.

Meanwhile, Young Yi intimidates the rest of the Resource Team with her fluent Russian. They try to take her down a peg by getting her to play lackey, but Mr. Ha steps in to ensure that she only serves him. The small progress that Young Yi is making with her team puts her in a good mood. When she spots Geu Rae, she tricks him into bowing to her by claiming that his fly is open. Geu Rae is in a state of shock before laughing nervously. 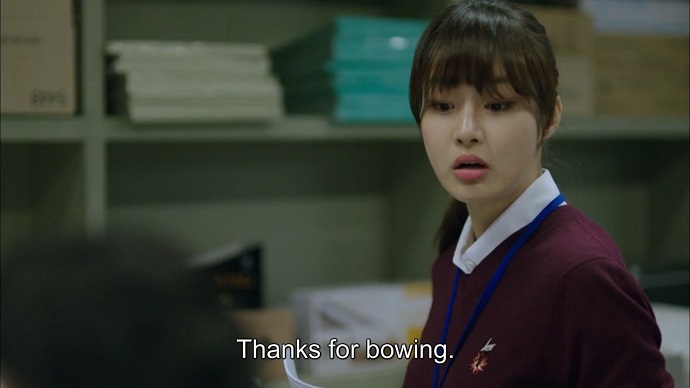 Forthright Suk Yool has met his match in his lazy and purposely dense supervisor, Mr. Sung. Suk Yool outright states that he is not willing to do his supervisor’s work, and Mr. Sung keeps insisting that it is all training. Suk Yool gets Young Yi and Geu Rae to join him for drinks so that they can commiserate about their bosses, though Suk Yool thinks that his is the worst.

The worst boss ever drunk calls Suk Yool, who is compelled to meet him in a private room where is he is drinking alone. Suk Yool attempts to reason with Mr. Sung by accepting the increased work load, but asking for credit. Mr. Sung loudly insists over and over again that everything is Suk Yool’s work then goads Suk Yool by calling him a ‘sociopath’ for being repetitive. Mr. Sung only appears to hear Suk Yool’s words when the junior employee becomes inappropriately informal. Mr. Sung uses his outrage as an excuse to abruptly leave, and Suk Yool is left with the $570 bar tab. The next day, Suk Yool boldly presents the receipt for the bar tab to Mr. Sung, and Mr. Sung uses his winning strategy of calling Suk Yool a ‘sociopath’ then refusing to pay. Suk Yool has a silent fit. 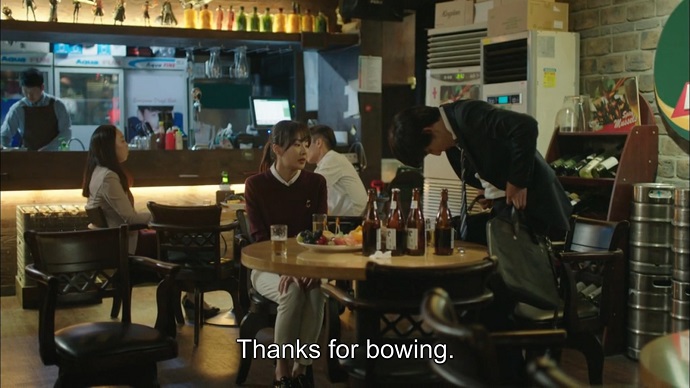 After Suk Yool had left to meet his boss, Young Yi succeeds in pulling the open fly trick on Geu Rae a second time. They walk home together, and Geu Rae lends Young Yi his jacket for the cold. Young Yi is already looking forward to Spring when it will mark the end of their first year at One International. Geu Rae is teary about the one year anniversary of belonging somewhere.

Mr. Chun arrives for his first official day with Sales Team 3, and instantly gets to work bringing the other members up to his speed. He bluntly suggests a hair cut for Geu Rae (oh please, let us have a mid-series makeover), then takes Dong Sik aside to rebuke him for being overly familiar. Dong Sik comes to realize that Mr. Chun’s appointment to Sales Team 3 may be to monitor them, and that the powers-that-be believed Mr. Chun’s familiarity with the team made him an ideal candidate.

Back in the office, Sang Sik is at his desk. After watching Mr. Chun bully Dong Sik, he loudly calls him out for playing office politics, then invites him for drinks in the same breath.

At the restaurant, Sang Sik asks Mr. Chun if he still drinks for work then alone at home. Mr. Chun’s legendary drinking capacity leads him to being invited frequently for drinks, making him miss drinking alone. Mr. Chun appears to have gotten over his prejudice towards the team. In return, the rest of the team agree to spiffy up their appearance.

The various teams at One International are ramping up in preparation for next year’s business proposal, budget, operation plans, and performance goals. Sales Team 3 has camped out in the meeting room for days when Geu Rae suggests that they pick up where the disgraced Mr. Park left off, because his Jordan business proposal had real promise, corruption notwithstanding.

Geu Rae’s suggestion shocks the team as well as his fellow contract workers, when word gets out. Young Yi observes that Geu Rae is adventurous and Baek Ki downplays her positive assessment, prompting the ever critical Suk Yool to ask if Young Yi has fallen for Geu Rae, and if Baek Ki is jealous of Geu Rae.

The Sales Team 3 meetings have abruptly stopped, as the team fights the inevitable conclusion that Geu Rae’s proposal is risky, but promising. Sang Sik consults with his colleagues who all advise him to avoid the Jordan business, since it is tainted by Mr. Park. A revival of the proposal by the very team that was associated with the fiasco would reflect badly on them.

Ji Young concedes that if Sang Sik chooses to pursue the Jordan business proposal, it must be for a higher purpose than mere profit. Sang Sik asks Geu Rae his reason for pursuing the Jordan business, and Geu Rae cites redemption from Mr. Park’s crimes by finishing off what he started and doing it right. Sang Sik credits Geu Rae for coming up with such an unorthodox idea, then decides that they will go ahead with it.

The bittersweet environment that “Misaeng” presents is fascinating. Sang Sik’s long overdue promotion comes, but at the cost of the mentor who had tried to get Sang Sik to advance his career in spite of himself. Then, Sales Team 3 finally get a new team member who they have an established working relationship with, but he turns out to be an unwilling transfer. Fortunately, any drama related to the introduction of Mr. Chun was short lived thanks to Sang Sik’s blunt yet collegial methods.

Speaking of collegial, it is nice to see Geu Rae and Young Yi continue to open up. The fact that they both feel comfortable enough to be sassy means more comedic moments like Young Yi’s open fly prank. My understanding is that the producers have no intention of creating any romantic story line, and I am okay with that, because at this point, it would feel forced. Their easy camaraderie is enough.

Just as the Young Yi, Baek Ki and Geu Rae are finally starting to fit into their respective teams, Suk Yool appears to be unable to conquer the problem in his. Who knew that the best way to deal with a blunt and obnoxious colleague is to shamelessly ignore him? Just as I could not figure out a solution for the problems of Young Yi, Baek Ki and Geu Rae, I am at a loss as to how Suk Yool should proceed. Show me the way to workplace zen, “Misaeng”!

Finally, this episode featured the most boring use of Baek Ki, yet. How many scenes of him crossing out words and writing more succinct text can they show? Here’s a scene of some riveting rewriting for your viewing pleasure. 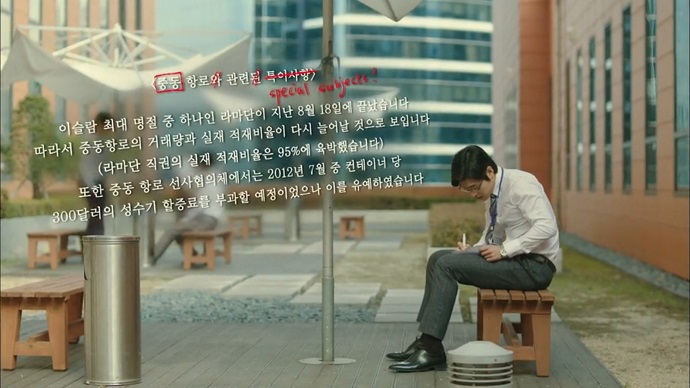