Side dish: I made a cake for the birthday party of Noonas Over Forks using this recipe for Yellow Cake from Mel’s Kitchen Cafe. I combined it with this recipe for frosting from Our Best Bites; it turned out surprisingly fluffy, and not too sweet.

The episode starts with a contemplative montage of a post-rain city, followed by severe anthrophobe, Cha Hong Do (Choi Kang Hee), and obnoxious psychiatrist, Ko Yi Seok (Chun Jung Myung) naked, and snuggling together in bed.

What?!? How did we get here? Let’s go back to the past to find out.

Back in front of the apartment of Hong Do’s policeman crush, Jang Doo Soo (Lee Jae Yoon), Hong Do is trying to psych herself up to talk to Doo Soo, with the pushy encouragement of Yi Seok. Hong Do takes off her helmet, just as Doo Soo comes out, then blurts out that she likes him. Yi Seok, who seemed like a nice guy for a minute there, bursts out laughing at Hong Do as she runs away, appalled.

Yi Seok calls Hong Do out to her neighbourhood bakery, but she hides outside, until he manhandles her into coming in. Between bites of bread, Yi Seok browbeats her into confessing that she told Doo Soo that she liked him, rather than asking if he slept well as she had intended.

Back at his office, Yi Seok forces Hong Do to repeat her confession by pretending that he’s Doo Soo, so he can evaluate Doo Soo’s reaction. In the middle of Yi Seok’s critique of Hong Do’s confession technique, Doo Soo calls her. Yi Seok swipes the phone from Hong Do, and the two of them wrestle over it, while Yi Seok instructs Doo Soo to forget what Hong Do said. Confounded, Doo Soo is cranky with his partner as they eat their lunch.

Yi Seok’s first patient of the day is an old woman who hallucinates the presence of her 12-year-old son. Yi Seok’s solution is to bluntly tell her she’s hallucinating, and that she needs to take her medication. When his mentor, psychiatrist Uhm Gi Choon (Seo Yi Sook) takes Yi Seok to task for not properly assessing the situation, Yi Seok goes on the offensive. 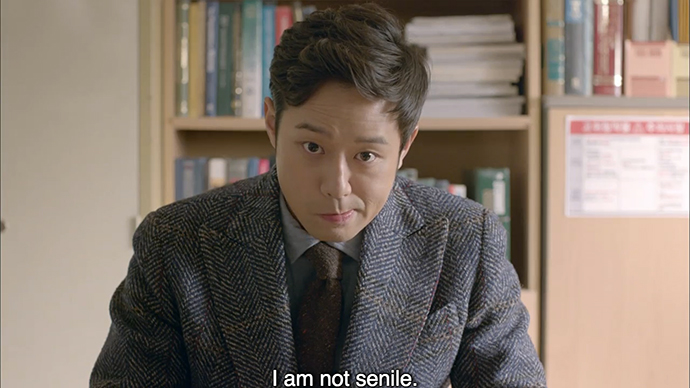 That evening, Yi Seok takes Hong Do for a drink, where she downs a bottle of wine by herself. Unsurprisingly, Hong Do ends up drunk, and tells him that he has no empathy. Yi Seok reluctantly drives her home, since she’s obviously too drunk to ride her scooter, but Hong Do passes out before she can tell him where she lives.

When she wakes up the next morning, she’s horrified to find herself in Yi Seok’s apartment, and even more horrified to remember throwing up on his rug as he carried her last night. Late for her job with the Chairman, Hong Do rushes back home to change into her old lady persona, Oh Young Rae, as Yi Seok calmly drinks coffee with the Chairman’s butler, An (Choi Moo Sung).

At the Chairman’s house, Young Rae runs into Yi Seok on his way out. As Yi Seok phones Hong Do, he’s surprised to hear her ring tone coming from Young Rae’s handbag, but she scurries into the house before he can comment. Inside, the housekeeper scolds Young Rae for coming in late smelling of alcohol. Later, Young Rae annoys the Chairman by trying to cover up her alcohol odour as she works, and he tells her not to come back.

Doo Soo is busy apprehending the suspect from the robbery of Yi Seok’s office, when he gets a call from Yi Seok’s aspiring actress sister, Ko Se Ro (Ahn So Hee). She reminds Doo Soo of her lawsuit against him, as the suspect jumps out of a window, and collapses on the pavement. Through a misunderstanding, Se Ro believes that Doo Soo called her ‘dog poop’, and gets offended. Back at her film set, Se Ro rhapsodizes about the possibilities of her character, another background extra.

Doo Soo and his partner get a visit from Yi Seok, to inform him that they’ve recovered only one of the stolen gold hearts, since the rest have been sold off. Despite being upset, Yi Seok is more interested in discussing Doo Soo’s reaction to Hong Do’s accidental confession, but they’re both too cagey to reveal anything to the other.

Back at the film set, Se Ro fails at playing a starving woman, when she can’t bring herself to eat something that reminds her of dog poop. She spits out the food with Doo Soo’s voice saying “dog poop” ringing in her ears, ruining the scene.

Doo Soo, meanwhile, drives home from work, chatting with his fiancée. When he gets home, there’s no side dish from Hong Do. Hong Do, dressed as Young Rae, is also going home, on the phone with Yi Seok, who is angry she wasn’t available when he called earlier. As she climbs the steps to her house, Doo Soo calls out to her, believing she has come to visit Hong Do. Thrown in a panic, Hong Do/Young Rae hangs up the phone, and takes off running, with Doo Soo chasing behind. It’s not long before she loses her wig, and Doo Soo catches on that she’s Hong Do.

The two of them end up on a park bench, talking, and Doo Soo figures out that the disguise helps Hong Do get over her fears. Hong Do opens up to him about her grandmother being her only companion as a child. Following her grandmother’s death, Hong Do was inspired to leave the house when she met Doo Soo, in order to see more of him, and came up with the idea of dressing as an old woman like her late grandmother. When Hong Do confirms that she has feelings for him, Doo Soo bluntly tells her that he’s getting married. That night at home, a sad Hong Do eats a whole pot of rice and seaweed while watching a game show.

Rejection is in the air, as a lonely Yi Seok goes to eat dinner with his estranged girlfriend in a convenience store. He loses his appetite when she tells him she’s getting married. Yi Seok tries to convince her to go on a breakup trip with him, but she leaves in a huff, unimpressed.

Back at the Chairman’s house, the Chairman’s prodigal son (Yi Seok’s father), Ko Jae Woong (Uhm Hyo Seop) is trying out some ideas for the business on the Chairman, but he gets shot down for being unreliable. Instead, his father tells him that his wife, Hwang Moon Sun (Jin Hee Kyung) is getting ready to go to the grave of Il Sook, their eldest son (Yi Seok’s older brother).

Yi Seok is on his way to do the same thing, carrying a giant bunch of sunflowers. When he arrives, Jae Woong is already explaining to Moon Sun that he won’t be attending the memorial rites, because of a meeting. He’s followed shortly by Se Ro, who has an audition, and feels uncomfortable going, anyway. Both are clearly resentful of this duty, since Moon Sun spends all her time thinking about Il Sook, rather than them. It’s, maybe, the second time on this whole show when Yi Seok uses a normal tone of voice, and insists that they go since Moon Sun wants them to. Jae Woong notices for the first time that Yi Seok is carrying sunflowers, which are his favourite flower, and thus Moon Sun’s way of representing him at past memorials.

Back at Gi Choon’s clinic, Yi Seok looks for comfort for his horrible family situation from Gi Choon, but finds none. Instead, he spots Hong Do, cleaning his office (he calls her “helmet”!), and drags her along to go visit the elderly patient from earlier, who, rather than being cheerful and energetic, is now medicated and unresponsive in a wheelchair. It’s Hong Do who notices that she’s not wearing any socks, and covers up her feet. Moved, the old woman opens up about the guilt she suffers over the accidental death of her son. 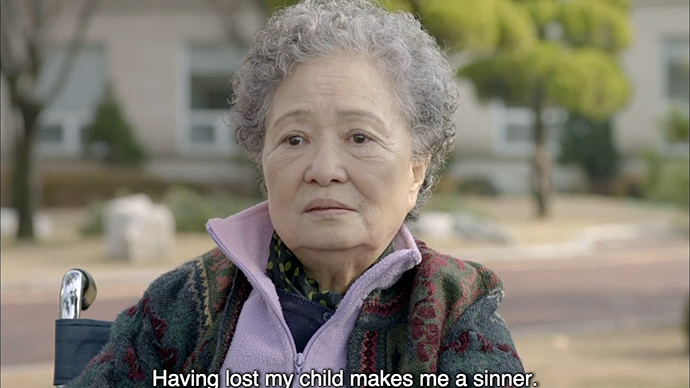 On the way out, Hong Do gets angry at Yi Seok for prescribing medication for the old woman (to prevent her hallucination of her son), and tells him how happy she would be if she could see her own dead grandmother, again. Yi Seok looks unmoved as Hong Do drives off, crying, but before he can leave, he’s chased down by a nurse who questions him about only prescribing vitamins for the old woman.

At the police station, Se Ro shows up with a bag of dog poop and dumps it on to Doo Soo’s desk as revenge for ruining her budding career as an actor. That night, a dense Doo Soo can’t figure out why his fiancée wants to come up to his apartment for ramyun, when he doesn’t have any.

The clueless Doo Soo and his fiancée go up to his apartment together, regardless, as a heartbroken Hong Do watches from behind her helmet. Hong Do stands in front of the window of Doo Soo’s apartment as it starts raining, and promises herself never to return. Her lonely tears are interrupted by Yi Seok, who is calling to demand that she come over to stop him from drinking.

Hong Do shows up looking like a drowned rat at Yi Seok’s apartment, but showers and changes before she sits down to drink. Yi Seok is fascinated by her towel turban, but it’s not long before the two of them are sharing their heartbreak with uncharacteristic honesty, Hong Do from losing Doo Soo, and Yi Seok because of his brother, and his family situation.

Finally, Yi Seok depresses himself to the point of wanting a drink, but Hong Do won’t let him have one. In the process of fighting over the beer, Yi Seok pauses, noticing Hong Do’s face is flushed. She’s frozen as he reaches out to touch it, and kisses her forehead, then her lips. Yi Seok pulls Hong Do up to her feet, and the kiss turns passionate. He’s smiling as he takes her shirt off, and she kisses him back.

This episode was quite the roller coaster ride. Would you have imagined, despite the preview at the beginning, how this was going to end up an hour ago? I couldn’t have, and yet, somehow when we got here, I believed it all the way. Congrats, writer, really well done.

But, since we’re here anyway, let’s talk about this last scene, which for once, involved two sober, consenting adults getting it on. There are a million ways to express desire and imply sex without being explicit, and “Heart to Heart” just demonstrated one of them. For those of you who think they got together too fast, let me assure you that this is pretty obviously two people getting together for comfort, rather than a sudden, random outpouring of love. That said, I will be more than a little disappointed if the two of them wake up the next morning, and screech in surprise at each other. Awkwardness, yes; shock and horror, no.

I really like how well the characters are drawn in this show. Even the smiling Doo Soo, who seems to be almost a caricature of a nice guy, has his cold side; he’s marrying a woman he barely knows, and responds to Hong Do’s feelings with nothing much more than concern for her. Where are his feelings in all this? I don’t get it across in the recaps that well, but even the side characters like Gi Choon and the Chairman are given little details that turn them into humans rather than props for the plot. Again, well done, writer.

Anyway, here are some bonus shots of that last scene.