Lee Jong Suk debuted as an actor five years ago, and has been working steadily ever since. How has Kdrama’s prettiest actor progressed?

Lee Jong Suk made his acting debut in 2010 with “Prosecutor Princess”. It was a glorified walk-on role so Lee Jong Suk did little more than wear a dark suit while providing support to the lead characters. It is worth noting that styling and grooming make all the difference, because Lee Jong Suk is barely recognizable in this legal drama.

Six months after his debut, Lee Jong Suk assumed the losing end of a love triangle as gay songwriter extraordinaire, Tae Sun in “Secret Garden”. It was a big step forward, because he was given the opportunity to act, though in a limited capacity. Tae Sun looks sulky, throws bitchy looks at the competition, and makes repeat attempts to escape Oska, the object of his affections. Due to the sullen nature of Tae Sun, there is no charm offensive.

Almost three years after his debut, Lee Jong Suk had his first starring role as Nam Soon, a teenager with a gang past in “School 2013”. Nam Soon starts out apathetic, is tormented by guilt with the appearance of former friend, Heung Soo (Kim Woo Bin), gets goaded into violence, cries a lot with Heung Soo, then assumes an an air of contentment when he and Heung Soo become besties, again. However, the default status of Nam Soon is stoic, so the aegyo only comes out in flashbacks to more carefree times.

I Hear Your Voice 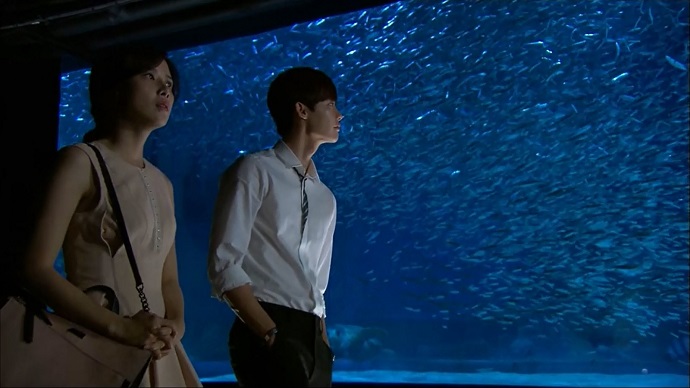 Six months after “School 2013”, Lee Jong Suk was depicting a teenager again, but this time, in a noona romance. In “I Hear Your Voice”, Lee Jong Suk plays the sensitive straight man to Lee Bo Young’s caustic lawyer. They have great chemistry together, and Lee Jong Suk’s charm has plenty of opportunities to make an appearance. Unfortunately, during some of the more intense scenes with the psychopath villain, Lee Jong Suk’s overacting rears its ugly head.

Since the genre of “Doctor Stranger” is melodrama, Lee Jong Suk’s tendency to overact was bound to come out. Yet, the show’s production team could not resist slipping in comedic moments, which Lee Jong Suk is surprisingly adept at. As a North Korean surgeon, he was best when he was acting irreverent.

Lee Jong Suk reunited with the team behind “I Hear Your Voice” for the recently completed “Pinocchio”. He appears to have toned down the overacting in the role of Ha Myung, a rookie reporter. Ha Myung is an orphan out to redeem his father’s name, so there are few opportunities for aegyo. It would appear that Lee Jong Suk is growing up.

Readers: Which Lee Jong Suk drama was your favourite?

And, how dewy was his skin?