Sweet and Sour Pork (탕수육)
“crunchiness like biting into a fine-grained slice of pie; feeling France while eating a Chinese dish”

Divorcée, Lee Soo Kyung (played by Lee Soo Kyung!) makes it clear during a blind date that she has no interest in getting remarried. What she really needs is a buddy who will allow her to dine at the latest matjib (맛집) without looking like a lonely weirdo. Unfortunately, her friend, Park Kyung Mi (Jung Soo Young) is usually unavailable, overrun by two children, in-laws, and her husband, Soo Kyung’s co-worker, Choi Kyu Sik (Jang Won Young). After her blind date abandons her, it looks like Soo Kyung is destined to die alone by gorging like her officetel neighbour, who is found dead after choking while eating a live octopus alone in Apartment 804.

Plucky poor little rich girl, Yoon Jin Yi (Yoon So Hee) moves into the vacated apartment of the deceased one month later. Despite the fact that her father’s trial drags on, Jin Yi spends money frivolously on errand services and Scandinavian furniture, while fulfilling personal dreams and playing at maturity. 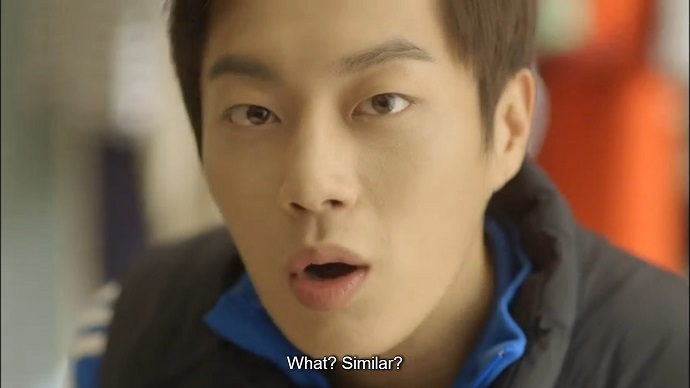 In contrast, the resident of Apartment 806, Koo Dae Young (Yoon Doo Joon of Beast) lives a frugal life while keeping up appearances. At home, Dae Young sleeps on a blanket on the floor and entertains himself with games on his phone. He uses the local dry cleaner like a personal closet, only paying for whatever outfit he decides to wear on any given day.

Soo Kyung becomes acquainted with both Dae Young and Jin Yi around the same time, and is equally unimpressed with both. While out walking her Pomeranian, Barassi, Soo Kyung overhears Dae Young sweet talking noonas over the phone while he carelessly makes a mess in the hallway. Later, Soo Kyung is forced to house Jin Yi for the night after the student passes out drunk, and must clean up Jin Yi’s vomit off her floor. However, Soo Kyung’s failure to be neighbourly is to her detriment after she misses out on amazing black bean noodle, and sweet and sour pork that Dae Young and Jin Yi decide to order in.

At work, Soo Kyung is no more sociable. Kyu Sik butters up their bosses with compliments: Attorney Oh Do Yeon (Lee Do Yeon) on her colourful style, and Attorney Kim Hak Moon (Shim Hyung Tak) on his TV appearance. Soo Kyung gets reprimanded by Attorney Kim for failing to watch his TV gig, and sent to face irate clients in Attorney Oh’s place. The large stash of candy bars in Soo Kyung’s desk barely keeps her stress in check.

After a particularly rough day, Soo Kyung is feeling fortunate to have her former blind date apologetically accompany her to matjib, King of Cheonghae. Soo Kyung eats orgasmically, and the blind date assumes that they have agreed to become friends with benefits. Soo Kyung throws the would-be rapist out of her apartment while quoting the law. Later, she turns into an angry drunk with Kyu Sik, who had set up the blind date.

In a reversal of fortune, intoxicated Soo Kyung vomits in the officetel hallway, and leaves the mess for Dae Young and Jin Yi to clean up. Jin Yi elects to deal with it; after all, they are neighbours.

Epilogue: Security video footage shows that Dae Young visited the previous tenant of Apartment 804 on the morning of the day she died. She welcomes him and the black plastic bag he carries, right away.

Before we get to the food, let me express my love for the opening music and montage. I really hope they keep some semblance of that for Season 2. Also, I just realized that Yoon Doo Joon performs his own band’s song, “Shadow” when his lazy character first appears on screen.

I have eaten live octopus in Seoul, or rather, their chopped up parts. They really do continue to squirm and attach themselves with their suction cups, long after death. So, you have to chew vigorously before swallowing to avoid dying like Soo Kyung’s neighbour. It was a novelty, but really, not worth the macabre display in term of taste. 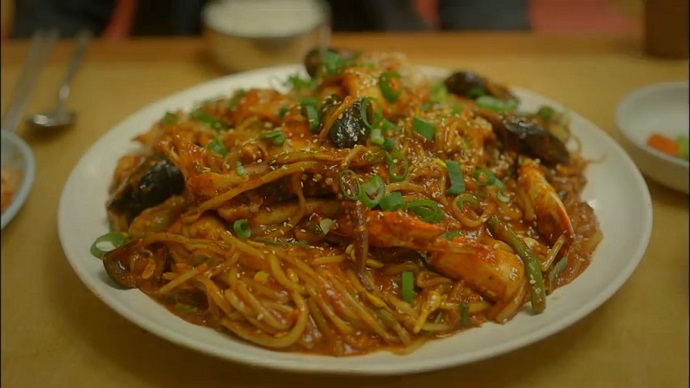 The dish is supposed to feed 3-4 people, and I would be glad for the assistance, because it looks heavy. Granted, I have yet to try it. Feel free to enlighten me with your experience in the Comments. 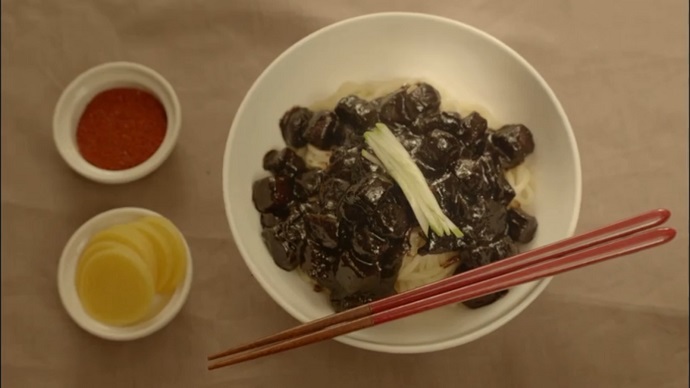 I like this dish best when the black bean noodle sauce is thick, and not too sweet. Unfortunately, I never managed to eat this dish in Seoul, because it is typically a delivery item, and my Korean is not even good enough to make a phone call. I’ll shore up the courage and vocabulary while I continue to sample this dish in local Korean restaurants.

Funny enough, I am not a fan of this dish in Chinese form. However, the Korean version, especially from Song Cook, is cracktastic. Admittedly, it looks nothing like the dish shown in “Let’s Eat”, but I’m sure that one is equally delicious.