Side dish: If you haven’t had enough of hearts, here’s four ways to eat beef hearts from Serious Eats. Don’t be grossed out; it’s actually good for you.

Psychiatrist Ko Yi Seok (Chun Jung Myung) confronts his grandfather the Chairman. The Chairman explains that he first learned that his son (Yi Seok’s father) was responsible for the fire that killed Yi Seok’s brother when he came home and drunkenly confessed. Having covered it up for 20 years, the Chairman is full of regret, and willing to reimburse Cha Hong Do (Choi Kang Hee), but Yi Seok is too appalled to let it go, and leaves.

Downstairs, Yi Seok’s sister, Ko Se Ro (Ahn So Hee) comes home to a glum atmosphere, and it’s not long before Yi Seok comes downstairs to demand why Butler Ahn (Choi Moo Sung) didn’t tell him the truth. Butler Ahn is too ashamed to say anything, while Se Ro asks to know what’s going on.

Yi Seok repeats this story to Hong Do when he gets to her house, and as per usual, has to bear the consequences of his family’s terrible behaviour when she throws him out. Sitting by herself, Hong Do tells her grandmother’s picture that it wasn’t her, then wonders how Yi Seok’s family could have done this to her.

Back at his home, Yi Seok’s father, Ko Jae Woong (Eom Hyo Seop) apologizes tearfully to Yi Seok’s mother, Hwang Moon Sun (Jin Hee Kyung). She confesses that she knew all along, but made herself forget in order to protect their kids (um… what?). The Chairman apparently had the same thing in mind, in that he couldn’t bring himself to force his son to take responsibility for the death of his own child, when he was already suffering so much. Yi Seok reasonably points out to him that, despite being able to evade responsibility, his father has been miserable for years.

Unable to sleep, Hong Do calls Yi Seok to vent her anger. When he asks to come over, she says she can’t see him without getting angry. So, instead, Yi Seok recounts how he fell for her to help Hong Do fall asleep. 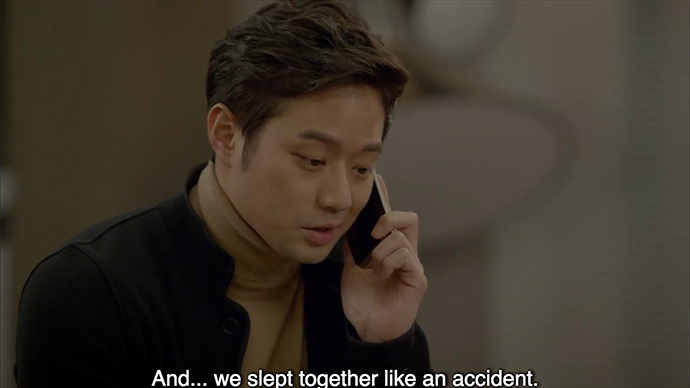 The next morning, Se Ro goes to visit her crush, Detective Jang Doo Soo (Lee Jae Yoon) at the police station, to vent about everything that’s going on with her family. He’s sympathetic, but it reminds her that she needs to leave, because she can’t keep coming to him with her problems.

In the same café where they met last time, Moon Sun apologizes to Hong Do, explaining that it seemed too hard on Yi Seok to turn his father into a murder. Hong Do isn’t having it, especially when Moon Sun asks her to forgive the innocent Yi Seok, and to take care of him. 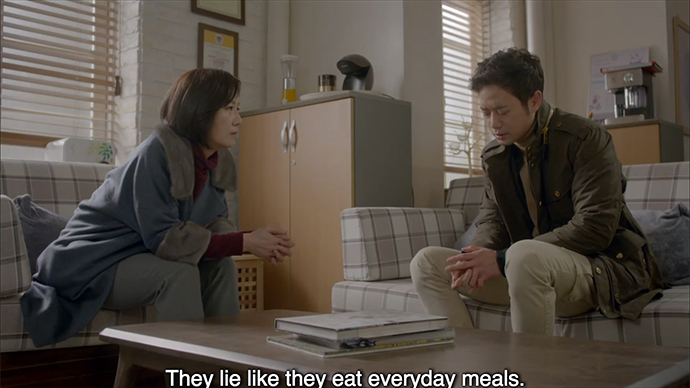 Yi Seok, for his part, is talking to his mentor, Uhm Gi Choon. Their formerly entertaining banter is nowhere in evidence, as she counsels him not to give up on Hong Do or his family, since everyone needs to get past this.

Doo Soo sits in the car with his partner, wondering, on a scale of 1 to 12, how much in love he has to be in to hold on to Se Ro. Despite losing patience, his partner is surprisingly understanding, and doesn’t smack the dense Doo Soo upside the head.

Back at the Chairman’s house, Se Ro comes in to find Moon Sun searching for her passport. When Moon Sun wonders if Se Ro hates her for being a distant mother, Se Ro points out that she grew up fine alone. She tells Moon Sun that if she wants to make her kids happy, she needs to move on from Il Seok’s death, and live her life.

Restless and angry, Hong Do goes to Il Seok’s officetel to yell at him about his family’s actions. She resolves to confront the Chairman, and ask him why he ruined her grandmother’s life, and let Hong Do believe it was her fault. Yi Seok stops her from leaving again, and holds her while she cries, apologizing over and over.

Back at the Chairman’s house, Butler Ahn catches Jae Woong trying to make a run for it. Butler Ahn takes his luggage away, and tells him he can leave after he cleans up the mess he created.

Hong Do thinks back to Yi Seok returning to her when he still believed she was responsible for his brother’s death. The next day, she goes to visit the Chairman, but instead of venting her anger on him, or demanding an apology, she tells him she will no longer apologize for dating Yi Seok. Instead, Hong Do will protect him from his family. She informs the Chairman that he’s lost his grandson to her, and leaves.

That evening, Hong Do goes to Yi Seok’s apartment, and tells him she won’t break up with him. He’s so relieved to hear it that he cries as she hugs him. They end up in bed together, and Hong Do promises she’ll lead him out from his brother’s shadow, just as he led her out of her house. He laughs, and they end up giggling together in bed.

Doo Soo and his partner are arresting a suspect, when Doo Soo realizes it’s the day of Se Ro’s departure. Se Ro, meanwhile, says goodbye to Yi Seok, and tells him to try to get along with the family. Back at the police station, Doo Soo looks at the time, and decides to go after Se Ro. He runs to the airport to find that her flight is delayed, then catches her in the shopping mall. Doo Soo confesses to Se Ro that he might like her, and that he thinks about her a lot. She kicks him for being slow, then tells him he should stop overthinking it, because he likes her. Se Ro smiles, as Doo Soo follows her with her bag as she walks away to catch her flight. In voiceover, she dubs them the tortoise and rabbit couple.

On the flight, Se Ro wonders if she should just go back, when Moon Sun boards the airplane, on her way to visit a friend in the US. Se Ro tries to change seats, but Moon Sun browbeats her into just moving over.

Back at the house, the Chairman calls for Butler Ahn to move his library ladder, but ends up with the housekeeper instead. When he calls her useless for not being strong enough to move it, she manages to push it where he wants it, then reminds him he’s pitiful since his entire family has left him.

Hong Do spots a help wanted sign in the window of her local bakery, and shortly after, she is called in by the café owner (a cameo by Choi Daniel). He believes her passionate nature, as reflected in her red cheeks, make her the ideal candidate. Yi Seok is supportive when Hong Do tells him about it, explaining that working in a bakery is her dream job. Yi Seok is jealous when she mentions that her new boss is very cool, but they make plans to meet for dinner. 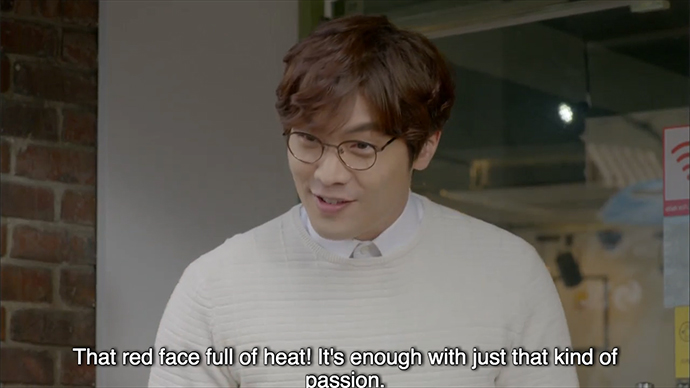 When Yi Seok goes looking for Gi Choon, he can’t find her, because she’s out taking a walk with Butler Ahn, on his first day off in 10 years. They decide they’re not compatible since he likes hiking and she doesn’t, but he solves the problem by picking her up and carrying her away.

Back at the police station, Doo Soo gets a package from Se Ro, of pictures she took when he was unconscious in the hospital. Doo Soo and his partner smile over Se Ro’s antics.

Hong Do and Yi Seok meet up outside of Hong Do’s apartment. On the walking path over the river, they kiss, and tell each other what love is. Yi Seok picks her up and runs off with her, as the two of them shout their love out to the world.

We’ve moved forward in time, at the Chairman’s house, as Moon Sun is leaving for another trip, this time to Hong Kong. When Jae Woong expresses surprise that she’s taking off again, she invites him along. 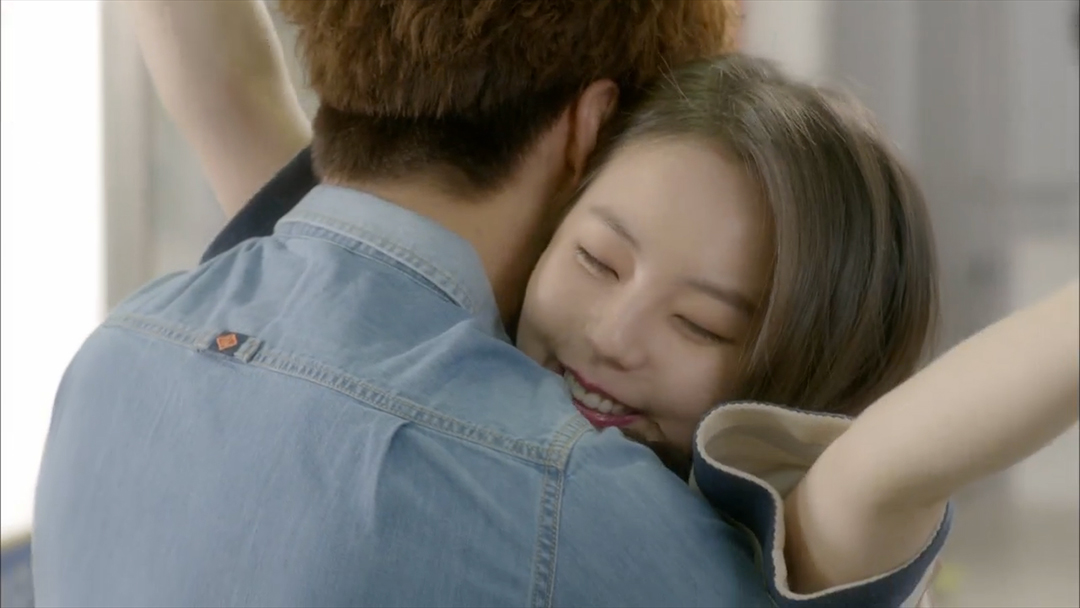 At the police station, Doo Soo is on the phone, trying to find news about Se Ro, when Se Ro appears with a flourish. Doo Soo has clearly learned to be more demonstrative, when he hugs her, and tells her he missed her. Awwwwww.

Hong Do is baking bread in her apartment while Yi Seok does the gardening (is he wearing her shirt?). As they sit down to eat watermelon together, he tries unsuccessfully to convince her to call him “Oppa”.

In our last scene, Yi Seok tells Hong Do not to be nervous, but to walk with her head held high. They walk hand-in-hand down a shopping street into the sunset.

Well, whatever. It’s a good thing I enjoyed the two leads so much, because this was probably one of the messier episodes of the series. Then again, they dug this hole in the last episode, and I guess they had no choice, but to follow it down to the bottom. I’m not even sure who to blame: the writer for leaving us with a sloppy ending or the PD for the clunky pacing. Even the ending scene, where Hong Do fearlessly walks down a shopping street seemed tacked on, since Hong Do’s anthrophobia had more or less disappeared a few episodes ago.

I’m not going to get into a rant here, but I would have been happier if she, Yi Seok and his family figured out a way to get past what was clearly a childhood accident, rather than dumping fault on an unpopular minor character. Unfortunately, thanks to the dragged-out, back-and-forth conflict, I had some trouble getting excited about the reunion of Hong Do and Yi Seok, though they saved it in the end with their cuteness. But, I think I speak for both JK and me when I say that I wish they’d filled the last couple of episodes with more smut, rather than more unnecessary angst.

On a more positive note, Doo Soo and Se Ro were pretty cute. As always, kudos to the actors, who were all excellent.

Look out for our series review, which will follow shortly!