Cheerful former rich girl, Jin Yi is collecting orders for dog clothing for the upcoming Lunar New Year. Meanwhile, paranoid legal secretary, Soo Kyung tries to find someone to take care of her Pomeranian, Barassi over the holiday, but has no luck. She decides to spend the Lunar New Year alone with Barassi instead. In his messy apartment, fast-talking insurance salesman, Dae Young’s wrist hurts as he writes out cards to his clients for the Lunar New Year.

At an interview for a job as a cosmetic surgery coordinator, Soo Kyung puts her foot in her mouth when she points out that the work might be illegal, and the interviewer asks her to leave. Soo Kyung is, of course, hungry, and ends up at a pig trotter restaurant where she runs into Dae Young. When she’s surprised that he’s eating alone, Dae Young treats Soo Kyung to a lecture on the benefits of solo dining, which she ignores in favour of stuffing her face. Dae Young manages to offend her regardless, when he reminds her that she belongs to him (thanks to her gambling mother).

Back at Attorney Kim’s office, Soo Kyung’s former co-worker Kyu Sik feels harried, but is happy to see Dae Young when he stops by with presents. When Kyu Sik complains that Attorney Kim is turning down all the qualified applications, Dae Young glibly tells Kyu Sik that Soo Kyung has many job offers.

Attorney Kim for his part, is standing outside of Soo Kyung’s apartment building, and calling her. When Soo Kyung chooses to ignore the call, Attorney Kim confronts her, but is put off by a barking Barassi. It’s not until they’re seated at a café that Attorney Kim apologizes and asks her to come back to work immediately. Soo Kyung accepts when he throws in a raise to sweeten the deal.

Back at the office, Attorney Oh misunderstands Dae Young’s gift of a short stay at a resort as a come-on, but her excitement is interrupted by the arrival of Soo Kyung and Attorney Kim. When Attorney Oh unceremoniously asks Soo Kyung for coffee, Attorney Kim insists that everyone will make it themselves from now on. Soo Kyung interprets his conciliatory gesture as evidence that he’s suspicious of her. 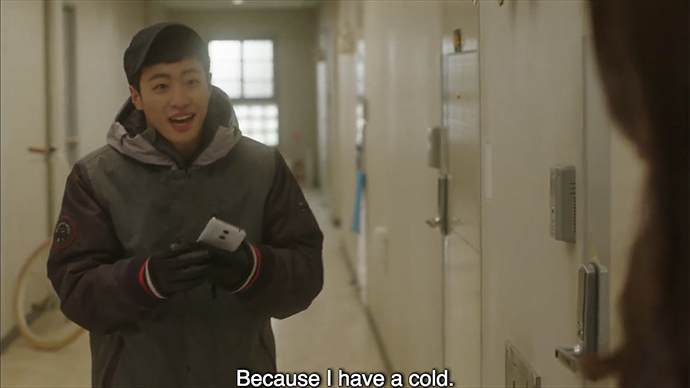 Back at the officetel, Jin Yi ends up on the elevator with a scary guy in a cap and face mask. When she tries to run away from him, he follows her, but it turns out that he’s just a delivery guy with a cold, there to pick up her packages (Fun fact: the actor is Feeldog from Big Star, who normally looks like this). Jin Yi switches to instant friendliness, but it’s not long before he’s called away to move his car, forgetting his gloves in the process.

At the office, Attorney Oh speculates on Dae Young’s intentions, while Attorney Kim makes creepy eyes at a nervous Soo Kyung. When it’s time to go home, everyone complains about their holiday duties except for Soo Kyung, who is spending the holidays alone.

At the grocery store, Soo Kyung is buying some New Year’s food when she runs into her friend Kyung Mi, with her husband, Kyu Sik and their sons. They stay long enough for the boys to give a traditional New Year’s bow, in exchange for a cash gift. On the way home, Soo Kyung invites Jin Yi and Dae Young out for conveyor belt sushi, but only Jin Yi is able to come. The two of them make an impressive showing, stuffing their faces, but when Soo Kyung takes pictures of their empty plates to emulate Mr. Shiksha, Jin Yi finally informs her that Dae Young and Mr. Shiksha are the same person. That night, Barassi looks nonplussed as Soo Kyung enthusiastically anticipates Dae Young’s return.

At home, Attorney Kim’s musings about taking Soo Kyung to the movies are interrupted by his nephew, who teaches him to how to use the voice search function on his own, then extorts $10 to go away. Attorney Kim uses it to find out how to get close to the woman he likes (I’m beginning to worry about you, Attorney Kim), only to be informed that he should share her interests. With Soo Kyung, of course, this is food.

We are treated to a montage of how our various characters spend their New Year. Attorney Oh performs ancestor rites with her identical family; Kyung Mi and Kyu Sik honor Kyu Sik’s parents followed by a performance of “Gangnam Style” dancing by the kids; Soo Kyung orgasmically eats soup made of freezer dumplings, followed by steamed dumplings; Dae Young spends the day at his father’s house (a cameo by baseball commentator, Heo Goo Yeon); and Jin Yi calls her mother, then gets a visit from the delivery guy looking for his gloves, and makes him choke on hot tea.

Soo Kyung is at a café (this is only notable, because I have the same mug she uses in blue), when she notices Dae Young’s car go by. She chases after him, but Dae Young is nonplussed by Soo Kyung’s enthusiastic fan-girling.

Back at the officetel, Attorney Kim attempts to “casually” drop by with New Year’s leftovers, but Soo Kyung is not home, and she doesn’t answer the phone when he calls. She’s too busy pestering Dae Young with questions about his blog, as they go out to eat. 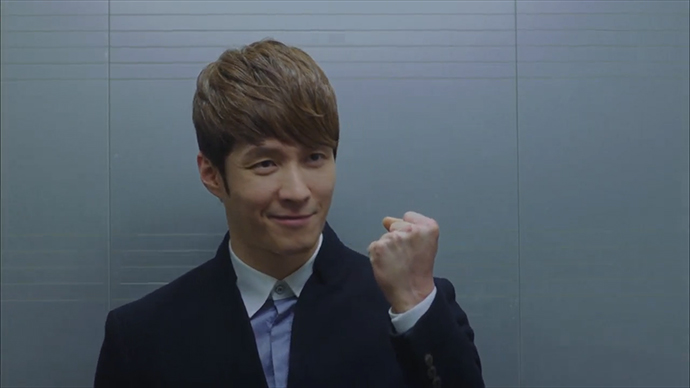 Soo Kyung’s adulation is so embarrassing that Dae Young is unable to come out with his usual lecture, but they eat orgasmically regardless. In the end, when Dae Young feeds Soo Kyung the last piece of galbi, she becomes breathless and wide-eyed as the episode ends.

This episode had a lot of eating in it, which makes sense given that it was the New Year. With the change in year also came the revelation that Dae Young is Mr. Shiksha. More than Soo Kyung’s transformation from cranky neighbour to slobbering fangirl, I enjoyed Dae Young’s completely unnerved reaction to it. He has no idea what to do with the weirdly nice Soo Kyung, and purposely provokes her to bring back her normal personality.

Even though it didn’t do much for plot or character development, it did give me the warm fuzzies to see each character’s New Years’ celebration. From Attorney Oh’s family of clones, to Kyu Sik and Kyung Mi’s family, to Jin Yi’s lonely phone call, to Attorney Kim’s nephew, it was all surprisingly sweet.

The only person whose New Year celebration I didn’t approve of was Soo Kyung. Freezer dumplings? FREEZER DUMPLINGS?!?? Come on. They have their time and place, but no freezer dumpling is worth Soo Kyung’s reaction. I know it’s product placement, but still. 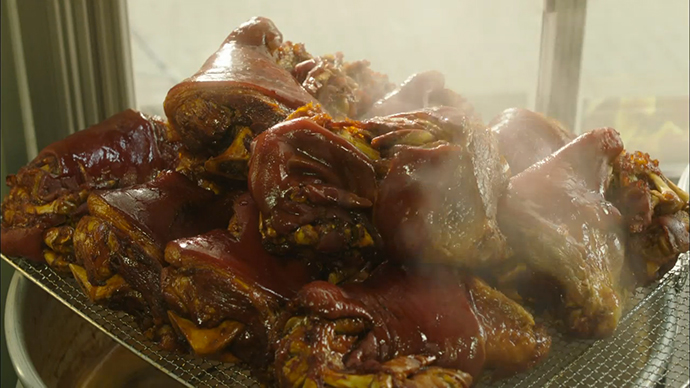 I’ve had Italian, French, Chinese and Korean pig trotters. I like the Korean version, but the Italian was really excellent. 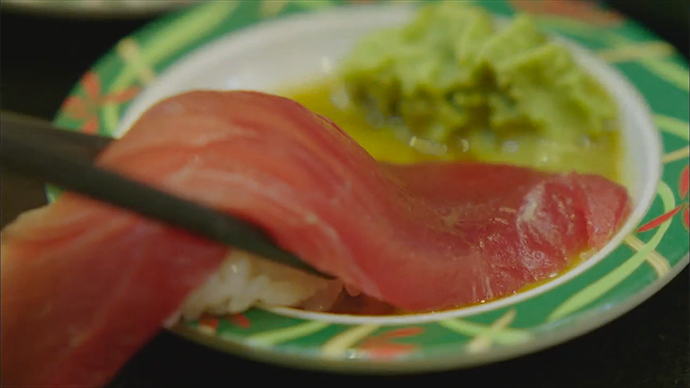 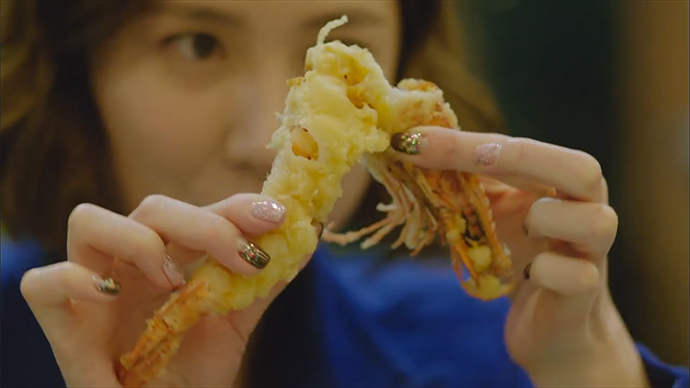 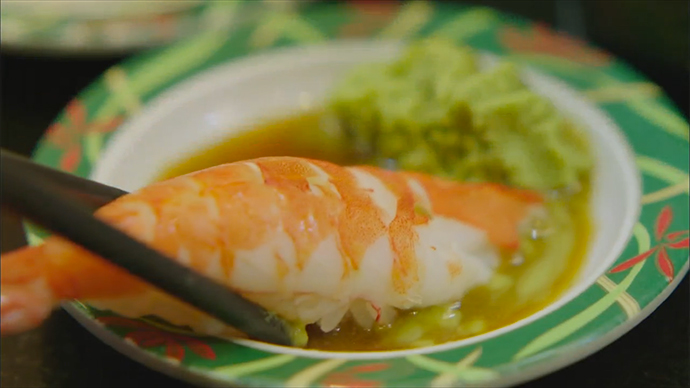 Well, it’s no Sukibayashi Jiro, but it all looks fresh and tasty regardless.

Kal-ssam, if I have it right, is some combination of kalguksu (knife-cut noodles) and ssam, lettuce wraps. Or, I could be totally wrong. Whatever it is, it looks pretty tasty.

Again, if I’m not mistaken, this is some variation on the dish that Soo Kyung ate at a stall in Episode 3. I stand to be corrected, so if anyone knows better, let me know, and I’ll change it.