Side dish: I recently had a zeppole, and it was amazing. It is traditionally consumed during the Fiesta di San Giuseppe every March 19, which is today! Here is a recipe courtesy of Swide.

After handcuffing Apple (Priscilla Wong), and having a melodramatic moment, Tai Shu (Edwin Siu) joins his security guard father in watching the sting operation against single mother, Lin Heung (Rachel Kan). Lin Heung appears, as expected, at the supermarket that night, where her co-worker is ready to move the baby formula. 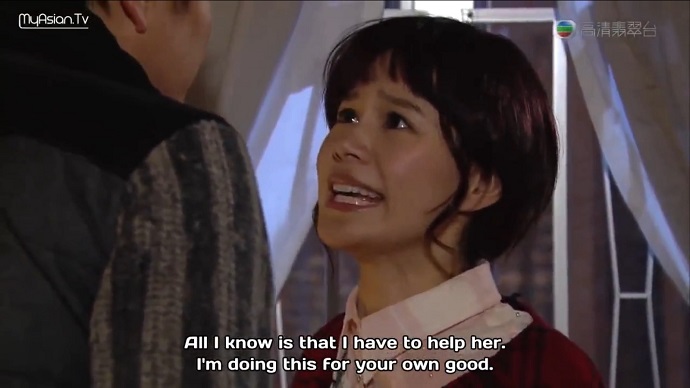 Apple manages to remove the window grating she is handcuffed to, and runs to warn Lin Heung. Tai Shu spots his partner on CCTV, and they engage in a fight that ends with Apple biting Tai Shu, and getting away.

Lin Heung is trying to talk her co-worker out of his scheme as he wheels the baby formula outside. The police descend on them and arrest Lin Heung and her co-worker. Apple is about to intervene when Tai Shu stops her to remind her of her primary undercover operation.

Apple’s former crush, Detective Ying shows up, and Apple asks Detective Ying to access Lin Heung’s phone records for a deleted message that would prove her innocence. They flirt a bit, and after Detective Ying leaves, Tai Shu shows up to object. Apple reminds him she is not really his wife.

Housewife, Dan Dan (Mandy Wong) and her husband show up at the police station with Lin Heung’s teenage son, Chit. When they are allowed to meet with Lin Heung, Chit goes back to his usual whining about his mother ignoring his feelings.

Shortly thereafter, Lin Heung is exonerated by the retrieved voice mail, and Chit looks aghast. Later, Chit apologizes, and Lin Heung cries, because it is first time that he has ever said, “Sorry.” Back home, Chit gives his mother all the red pocket money that he has saved over the years. She claims she does not need it, but the truth is that her ex-husband has refused to fund his son’s living expenses up front.

Back at their apartment, Tai Shu sees Apple trying to re-install the window grate, and tries to take over. Apple refuses his assistance, and in the struggle, Apple is injured. She angrily refuses his offer to tend to her wound, but eventually accepts Tai Shu’s help out of fear of infection. A violin plays as Tai Shu applies the dressing, then when he helps her blow dry her hair.

Apple stops the hair drying prematurely when the moment becomes too intimate for her, but she has no problem ordering Tai Shu to take care of her the next morning. However, Tai Shu is too busy with plumbing job orders, and leaves her an apple for breakfast. It reminds Apple of the time a teenage Tai Shu tried to sell her on the fruit with an impromptu rap ditty.

Meanwhile, Ching, the sister of comatose criminal, Wan notices a barcode on her brother’s body. She uses it to successfully access his USB storage key, and declares herself rich upon viewing the contents.

Tai Shu brings a modest boxed lunch for Apple then offers to cook dinner that night. Tai Shu gets Apple to accompany him grocery shopping, then to help out in the kitchen, though he is mindful of her injury the entire time.

They are bonding over the stove when Detective Ying, known as Valentino outside of work, calls with an invitation to have dinner with him that night. Apple looks guilty as she asks if Tai Shu would mind if she went on a date, and Tai Shu reluctantly gives her leave.

When Apple declares that she won’t go, Tai Shu is instantly cheered. However, it is not out of regard for Tai Shu, but her lack of date clothes. Tai Shu wonders aloud about Valentino’s appeal, and Apple decides to try to make up for her frumpy wardrobe with make up. She ends up enlisting Tai Shu to apply make up for her, because of her injury. Apple asks Tai Shu if he has any last words before she leaves. Tai Shu stays mum, because he believes she will go regardless of what he says.

Apple feels self-conscious about her clothing as she is about to enter the restaurant. She proceeds, emboldened by Tai Shu’s reassurance that any man who likes her will not care about her appearance. Unfortunately, Valentino appears put off by Apple’s outfit, and the smell of onions emanating off of her. While Valentino prattles on about himself, Apple can only think of Tai Shu alone at home.

Later, she abandons Valentino prematurely to buy supplies to grow an apple tree. When she returns home, Apple is disappointed that Tai Shu did not leave any dinner for her, but then, boasts about her amazing date. Tai Shu refuses to hear any more, and goes to take a bath. Apple goes to the fridge, and is pleasantly surprised to find leftovers marked for her.

Parts of this episode felt like they were cut from a soap opera: Apple begging Tai Shu not to leave her handcuffed, then running around carrying the window grate she is handcuffed to, the love triangle being played out at the police station between Apple, Tai Shu and Valentino, Lin Heung pleading to her co-worker, the police, her son, and ex-husband for various reasons, and the violin background music. I couldn’t believe what I was watching.

Fortunately, the episode was saved by some nice bonding moments between Apple and Tai Shu where they bicker as usual, but with some genuine care behind the squabbling. Despite the comedic nature of their pairing, Priscilla Wong was great at conveying her character’s palpable discomfort with her growing feelings for Tai Shu. I doubt that there will be any real sexual tension between the couple in upcoming episodes, but one can dream.