Pork Belly on a Coal Briquette Fire (연탄에 불 삼겹살)
“I am positive that a coal briquette grill is the best grilling method.”

Nervous legal secretary Soo Kyung is running late to meet the older brother of the “Don’t Ask” victim. On her way, her fast-talking neighbour Dae Young spots her running, but she doesn’t hear him call out. Soo Kyung stops briefly at the dry cleaners, then meets the brother on a street corner, where he asks her to step into an alley. Dae Young, meanwhile, now knows that Soo Kyung is meeting an imposter, most likely the assailant himself, and tries to chase her down to no avail. 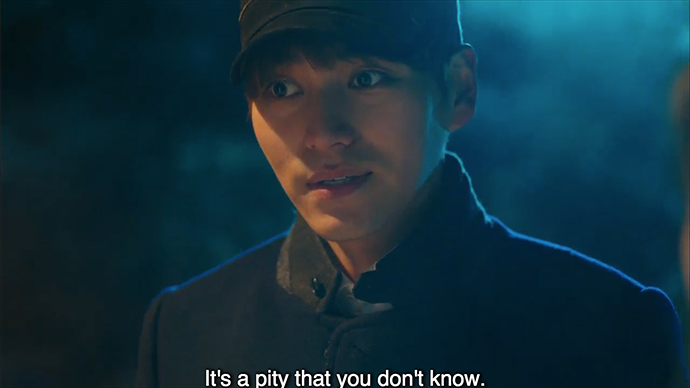 Soo Kyung, meanwhile, goes down a dark alley with the assailant, and we cut away as he gets ready to attack her.

Dae Young finally finds Soo Kyung’s destination from the dry cleaner, but gets into an accident on the way, hurting his wrist. He arrives at the scene to find a body being wheeled away, but his premature distress is interrupted by the voice of Soo Kyung asking if he’s okay. Dae Young hugs Soo Kyung in his relief. 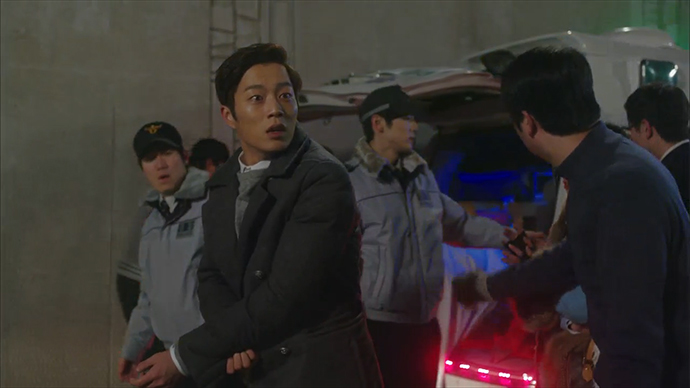 When Dae Young discovers that Soo Kyung volunteered to be the bait in a sting operation, he’s angry at her for risking herself, and even dismisses her confession that she did it out of guilt for accusing him. When Soo Kyung notices that he’s bleeding, they end up at the hospital, where they share a cute moment over the new cast on his arm. They’re interrupted by the arrival of Jin Yi and Attorney Kim, but when Dae Young tries to leave her alone with Attorney Kim, Soo Kyung chases him and Jin Yi, and they all go to eat.

They end up at a charcoal barbecue restaurant, where, after getting Dae Young’s usual food lecture, they orgasmically gobble up their pork belly. Meanwhile, Attorney Kim drinks at the bar that’s in every K-drama, beating himself up for sending Soo Kyung into danger.

Back at the officetel, neither Soo Kyung nor Dae Young can sleep, so they end up on the phone. It’s pretty cute as Dae Young promises Soo Kyung that he’ll take her to eat chicken feet and meat with cartilage. 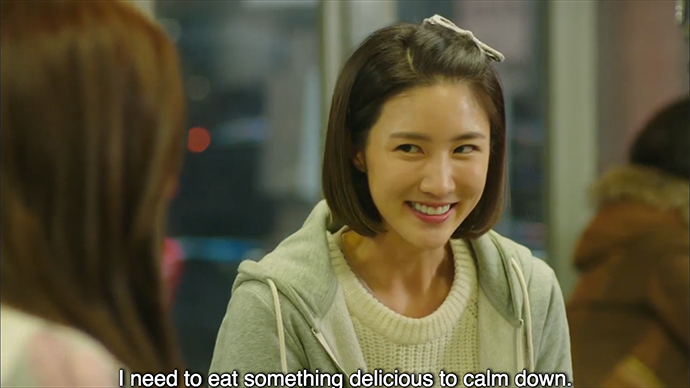 The next morning, Soo Kyung is woken up by Kyung Mi, who brought over ox bone soup (why don’t my friends ever bring over ox bone soup?) and berates her for putting her life on the line, then cries all over her from worry. As they eat breakfast after, Kyung Mi counsels her to move out, but Soo Kyung refuses. Soo Kyung leaves some of the soup for Dae Young later.

Back at the office, Kyu Sik congratulates Soo Kyung on her bravery while Attorney Oh makes jealous comments. When Attorney Kim shows up, it’s apparent that he slept in the office. Later, he makes up an excuse not to go to lunch, but gets caught out in his lie when they come back to the office. In an effort to avoid Soo Kyung, Attorney Kim leaves early that day. Soo Kyung goes after him and takes him out to tea. There, she thanks him for his feelings, but explains that she can’t return them. 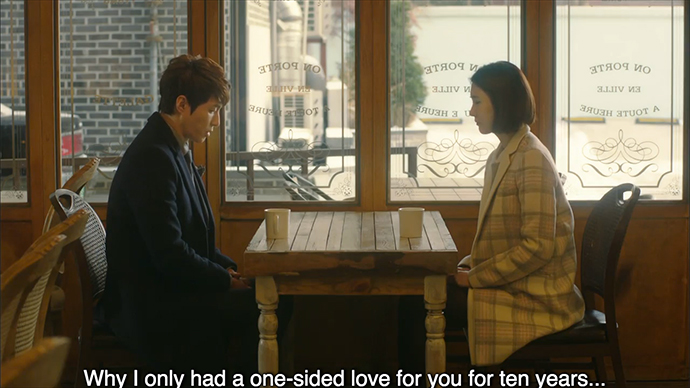 Back at the officetel, Jin Yi discovers that Kwang Suk quit his job when she gets a delivery from a new deliveryman, and wonders what happened to him.

At the dry cleaners, Dae Young takes offence when the dry cleaner points out that he must like Soo Kyung, and gives him Soo Kyung’s order to deliver to her. Back at the officetel, Dae Young wrangles a dinner invite out of Soo Kyung in exchange for the coat, and when Jin Yi turns them down, they end up eating chicken feet and meat with cartilage by themselves. 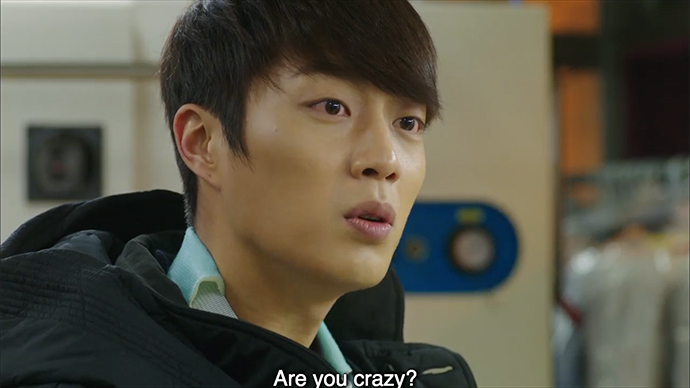 Jin Yi, it turns out, is packing up surprise presents for Dae Young and Soo Kyung, and coming to meet them. As she leaves her apartment, a creepy hand emerges from under the bed.

All oblivious, Dae Young and Soo Kyung are stuffing their faces, when Soo Kyung’s face turns red from the spiciness. Dae Young can’t help, but point out how funny she looks, and tries to take a picture. When she covers her face, he uses his good hand to move her hands away and kisses her.

Jin Yi, of course, is standing right behind them.

For once, I don’t object to the surprise kiss face on Soo Kyung, because this really came out of nowhere. Up to this episode, there’s been so little indication that Dae Young has romantic feelings for Soo Kyung, that I was even surprised that the dry cleaner thought so.

Yes, I get that Dae Young is supposed to be the type that doesn’t show his feelings easily, and he’s too cheerful to get down about it, but still. A bit more indication that he was interested would have been helpful. As it is, aside from this kiss and Soo Kyung’s earlier moping about her feelings, I would have them pegged more as good friends than lovers.

But whatever! Even as a surprise kiss, it was pretty dreamy. Bad timing for Jin Yi, though. As for Attorney Kim, well, I feel bad for him, but I can’t say it was unexpected; acting like a jerk for ten years on the basis of a hair pin is not attractive behaviour, and he knows it. At least Soo Kyung gave him a nice rejection. 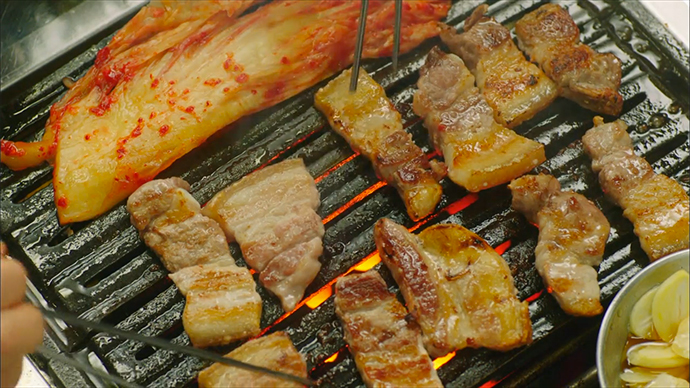 I agree with Dae Young: coal barbecue is obviously superior to gas barbecue. It’s just more of a wait. 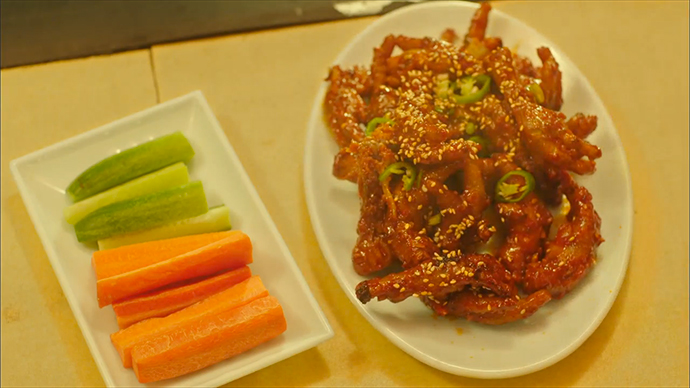 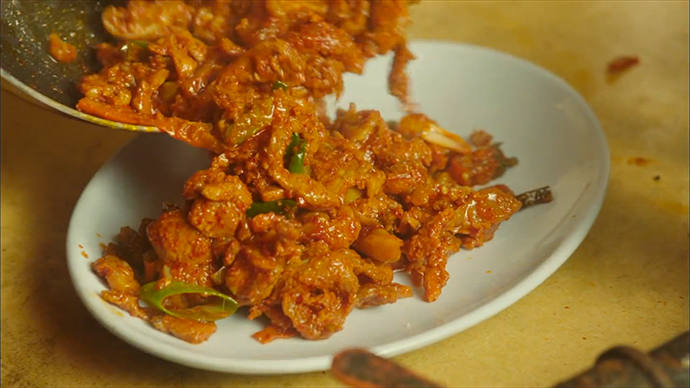