Side dish: Did you know that you can eat jackfruit morning, noon and night? There is a whole website dedicated to Jackfruit Recipes.

Undercover cops, Apple (Priscilla Wong) and Tai Shu (Edwin Wong) have taken housewife, Dan Dan’s husband in for questioning. He denies having any association with loan sharks, and offers to help since his wife also owes them money. Later, Apple and Tai Shu’s boss agree that Dan Dan’s husband could be useful to their operation. 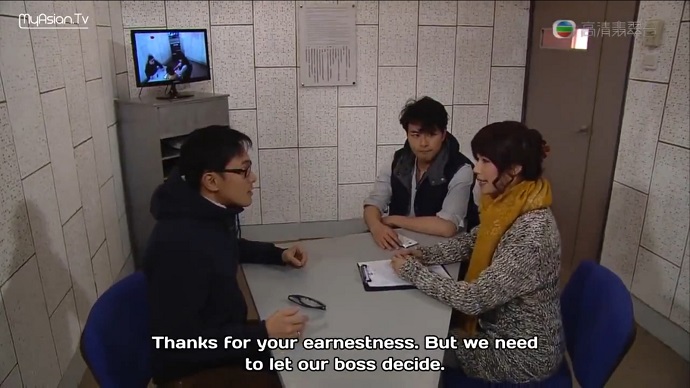 Apple runs into Valentino, the colleague who was going to partner with her in the undercover operation before his injury. They are doing some light flirting when Tai Shu shows up, and it soon becomes apparent to Valentino that he now has competition. Later, when Valentino runs into Apple’s mother, he is disturbed to learn that Apple and Tai Shu have convinced her family that they are truly married with their passionate kiss.

Ching, sister of comatose criminal, Wan, is kidnapped by the loan shark syndicate. She finds out that Wan was given $3,000,000 to lend out, and the loan sharks want it back. The syndicate boss charges Ching with finding the money, and offers her $600,000 if she is successful. In front of the loan sharks, Ching puts on her usual innocent act, but back at Wan’s apartment, she is scheming to claim the entire amount for herself.

It is Estate Fun Day, and beauty shop owner, Fung Nei (Kaki Leung) is not offering deep enough discounts for the liking of the housewives. Her neighbours, Dan Dan (Mandy Wong) and Lin Heung (Rachel Kan) swoop in offering free gifts with purchase to sweeten the deal. In the midst of the ensuing buying frenzy, Fung Nei, Dan Dan and Lin Heung reconcile.

Tai Shu plays a ring toss game and wins Apple a giant stuffed jack fruit. Coincidentally, ‘jack fruit’ is Tai Shu’s nickname. So, it is awkward when Tai Shu’s father marvels that the prize will allow Apple to hug a jack fruit all night.

Undercover cop, Ga Lun has become the darling of Fung Nei and her mother-in-law by helping the former with her booth, and winning prizes for the latter. Fung Nei’s husband returns just in time to see the man who has taken his place. The next day, Ga Lun joins the estate men in a game of football, and his prowess gives Fung Nei’s husband another reason to be jealous.

Lin Heung’s teenage son, Chit is texting his online friend when Tai Shu and Dan Dan’s husband insist that he has been corresponding with a female and not a male. Little does Chit know, his male online friend is his mother. 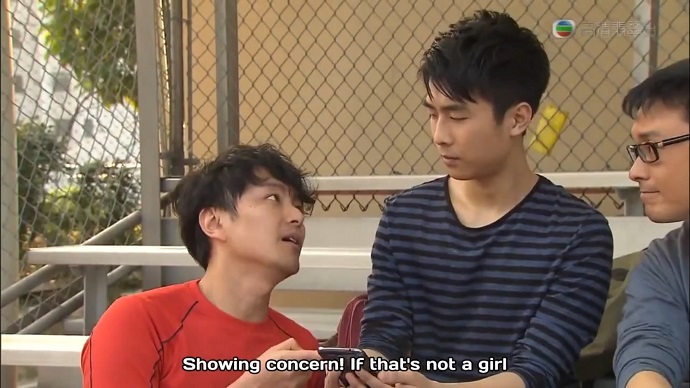 Apple meets Suki, who is secretly Tai Shu’s estranged mother, at a restaurant. When another diner reacts in horror at Suki’s facial scars, Suki explains to Apple that her own obsession with beauty made a mess of her face. Apple comforts her saying that inner beauty is more important than outer beauty.

Meanwhile, Tai Shu is having dinner with his father at a Japanese restaurant. Tai Shu is grumpy, because he thinks Apple is on a date. His father is focused on the apartment building that he has long coveted, and came to the Japanese restaurant in a misguided attempt to practice his crappy Japanese on the Cantonese speaking waiter.

Fortunately for Tai Shu’s father, Ga Lun studied in Japan for half a year, and he is enlisted to translate. As usual, Ga Lun’s stomach acts up right before the big moment, so he is absent when the Japanese owner arrives. After overhearing her speak Cantonese, Tai Shu’s father recognizes his estranged wife, Suki and is outraged by her deception, along with her theft of their down payment on the apartment, and abandonment of him and Tai Shu 20 years ago.

The flashbacks recall Suki’s pursuit of plastic surgery to keep her husband’s eye from wandering, and the botched job that almost drove her to commit suicide. She was saved by a sympathetic surgeon who she ended up caring for until his death. Suki used the inheritance he left her to return to Hong Kong and buy the coveted flat. 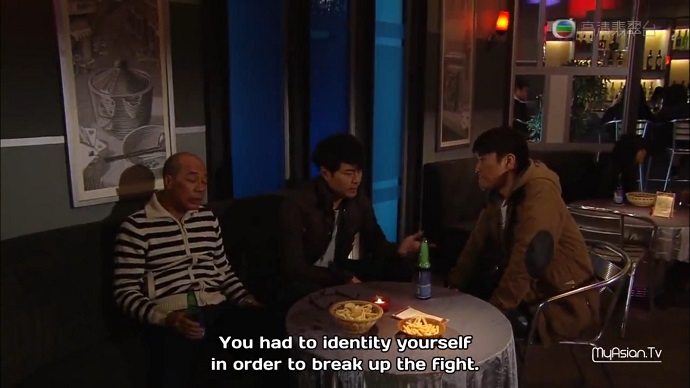 Tai Shu finds his father drinking the pain away. Ga Lun is present and his cover was blown when he had to flash his badge to stop a brawl involving Tai Shu’s father. Dad drunkenly reveals to Tai Shu that his mother is back, and Tai Shu is determined to have nothing to do with her.

That night, Tai Shu has the recurring nightmare of being abandoned by his mother, and Apple ends up spending the night comforting him. Tai Shu wakes up to find their arms intertwined, and is thrilled. He has just finished cooking breakfast for the both of them when Apple is woken up by a call from Valentino. Tai Shu watches the conversation resentfully, and when Apple notices him, they are both uncomfortable. 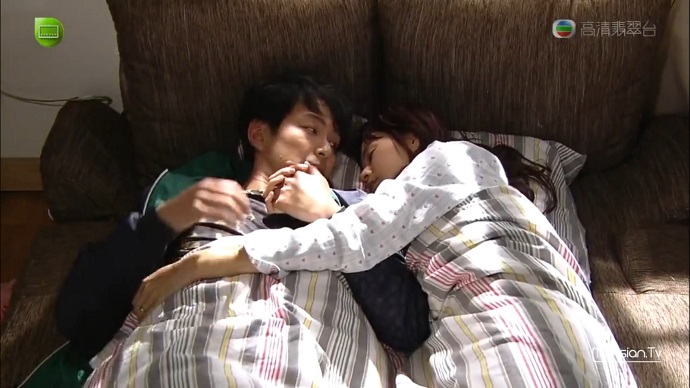 Ching runs into Ga Lun and is initially unfriendly since she was injured during their last meeting. She brightens up when Ga Lun offers to show her the lockers that she needs to hide the USB copy of her brother’s records. Ga Lun’s bad luck causes another mishap resulting in Ching hurting her back and almost losing the USB.

Apple’s father is suffering stress due to financial issues with his business. When Apple’s mother returns from another shopping spree, he loses his temper. In response, Apple’s mother has a tantrum and runs away from home. She shows up unannounced at Apple and Tai Shu’s apartment, and casually decrees that she is moving in.

This episode was a good balance of many different story lines, showing just enough of each to keep everything interesting: Dan Dan’s husband becoming an amateur detective, Ching trying to pull a fast one on the crime syndicate then falling victim to Ga Lun, Ga Lun prompting jealousy in Fung Nei’s husband, the return of Tai Shu’s mother, Tai Shu falling for Apple, and the sudden invasion of Apple’s mother. With only a few episodes left, I hope the series keeps up the good pacing right to the very end.

Now, I would like to highlight the faces on food in this episode. Fun! 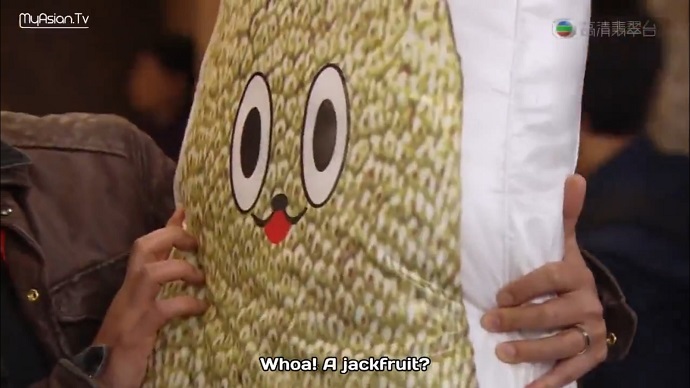