Clam Noodle Soup (바지락 칼국수)
“If only I picked out the clam shells, it wouldn’t ruin my pace.”

In the aftermath of the revelation that Soo Ji is the former fat classmate of Dae Young, she continues to exact her petty revenge on him while he attempts to conduct business as usual. When Dae Young introduces himself to Soo Ji’s government colleagues in the hopes of gaining new clients, she undermines him by revealing that he is an insurance broker. Similarly, Dae Young’s relationship with elderly neighbour, Jeom Yi is strained by Soo Ji’s warning to the old woman that Dae Young is just buttering her up to sell insurance.

When not sabotaging Dae Young’s career, Soo Ji is obsessed with her one-meal-a-day diet. Her ultimate goal in losing weight is to get married, preferably to her crush, government worker, Sang Woo. She remains smitten with him despite his inability to remember her name, and not knowing anything about him other than that he is well off, lives alone, but escapes to Seoul for family and friends over the weekends, and that he does not share her obsession with food.

Initially, an accommodating Dae Young entices Soo Ji to stay in close proximity to him by pointing out that it is the best way for her to exact her vengeance. After suffering her professional sabotage, Dae Young asks Soo Ji what he can do to receive her forgiveness. Soo Ji asks for his help in bagging Sang Woo, and Dae Young promptly declares it mission impossible.

After fulfilling a series of tasks for Jeom Yi, Dae Young confronts her about a change in her attitude towards him, and Jeom Yi confirms that Soo Ji had warned her about him. Regardless, Jeom Yi unleashes Dae Young on the enthusiastic old women of her dance class.

Dae Young is compelled to take his lonely colleague, Taek Soo out for dinner and drinks, then drag him back to his apartment. An inebriated Taek Soo ends up urinating on the shared landing between Dae Young and Soo Ji’s apartment, adding to her list of grievances against Dae Young. The next morning, Dae Young finds Taek Soo bottomless, then must apologize on his behalf to his outraged landlady and clean up his mess.

Dae Young has a reunion with his former classmates, and finds out how Soo Ji was tormented by the other kids, and that she suffered from depression. When he brings news of the impending nuptials of a former bully, Soo Ji reacts with bitterness at her own single status. Having spent most of life lonely, she no longer wants to be alone. A sympathetic Dae Young decides to help Soo Ji marry Sang Woo.

Epilogue: When Soo Ji arrives at her apartment door alone, the motion-activated lights on an upper floor turns on. Soo Ji rushes inside her apartment, then peers through her peep hole. She is relieved to see that the hallway is dark, and therefore, unoccupied. Little does she know, a mystery person stands outside her door, holding a finger over her peep hole.

Why are the writers making the lead couple so unlikable? Soo Ji can’t stop obsessing about losing weight or bitching about skinnier women, and pines after a man she admits to knowing nothing about. Dae Young is so driven to make professional contacts that he repeatedly pesters Soo Ji who has made it clear that she resents him for destroying her life.

I am also not a fan of the dynamic between Soo Ji and Dae Young. Soo Ji comes across as vindictive and petty when she repeatedly attempts to undermine and torment Dae Young, while Dae Young is purposely obtuse for insisting on using Soo Ji to advance his career. When they bicker over the correct way to eat various foods, I find myself missing Dae Young’s comprehensive food lectures from Season 1, so it is a relief when they finally shut up and stuff their faces.

The other characters are no better off. Second male lead, Sang Woo appears to be comatose. His government colleague, In Na can’t stop engaging in schadenfreude. Old lady, Jeom Yi is despicable when she decides to use Dae Young after suspecting him of trying to sell her insurance. Insurance man, Taek Soo is just disgusting with his lechery, his bullying of Dae Young into entertaining him, and his public urination. As a side note, it was sloppy of the production team to censor out Taek Soo’s supposed exposed privates only to have a reflection in the glass reveal that the actor is indeed wearing whitey tighties. They also appear to be attempting to introduce another terrible character in the form of a lazy convenience store employee who uses her physical charms to manipulate men to do her job. 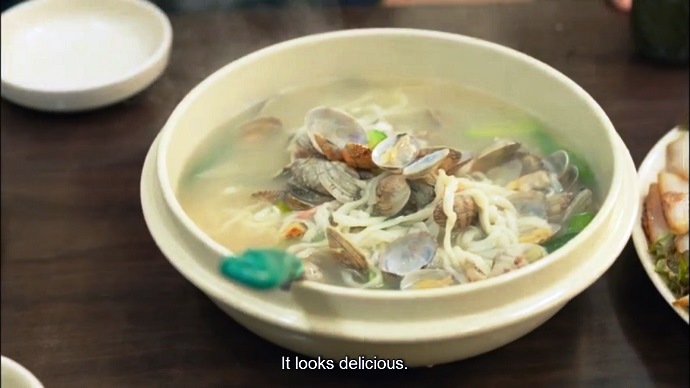 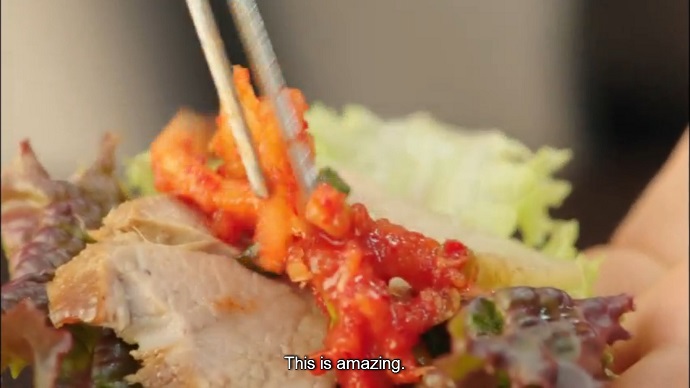 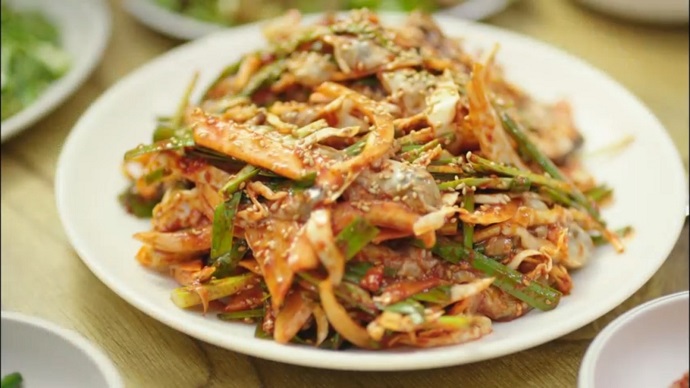 According to former Noonas Over Forks sponsor, David Kim: “This sea snail/conch dish is a Korean coastal staple and delicious with soju, especially if you’re on a tottering plastic chair, clutching a rickety plastic table, perched upon a rocky embankment, shivering from a misty sea breeze, suppressing the urge to go to the bathroom.” 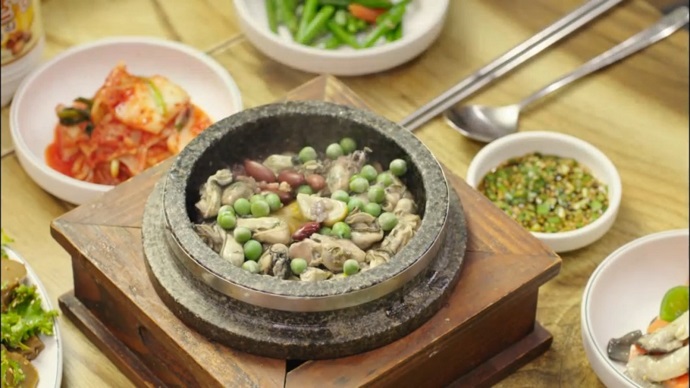