Insurance salesman, Dae Young notices that the mail has piled up outside the apartment of his neighbour, Soo Ji. He frantically knocks on her door out of concern. It turns out she is just holed up, writing her next novel, and looks awful due to lack of sleep.

Taek Soo is waiting for Dae Young when he gets home, and remains affixed to his arm the next morning. Dae Young insists they have breakfast in the local convenience store, because it is the healthy thing to do. Since Dae Young shows more concern for him than his wife, Taek Soo proposes getting a divorce so they can live together. Dae Young appears disturbed and annoyed.

Sang Woo is having a work meeting with Soo Ji, when his colleague, In Na asks him how his blind date with her sister went. Soo Ji is alarmed then thrilled when Sang Woo officiously tells In Na to stick to business. Soo Ji is smug as she bonds with Sang Woo over books in front of In Na.

After work, Soo Ji decides to bone up on her reading before Sang Woo discovers how ignorant she is. As she is searching for books at the library, she runs into Sang Woo himself. When he asks for suggestions on what to read, she claims to be too busy writing, then beats a hasty retreat.

Soo Ji unconsciously types Sang Woo’s praises, but fortunately, she erases the incriminating text before Sang Woo starts reading off her laptop. Though Soo Ji freaks out, Sang Woo expresses admiration at what little he was able to read, and asks to be her novel’s first reader.

Wondering if she should ask Sang Woo to take her home, Soo Ji abruptly says goodbye, instead. Luckily, Sang Woo volunteers to do exactly that. They are sitting silently in his car when Sang Woo proposes having dinner with him on Friday. Soo Ji is thrilled until she realizes that Sang Woo was actually speaking with his mother over his earpiece. Sang Woo betrays his true self with some accidental swearing, then he and Soo Ji loosen up as they bond over cursing. 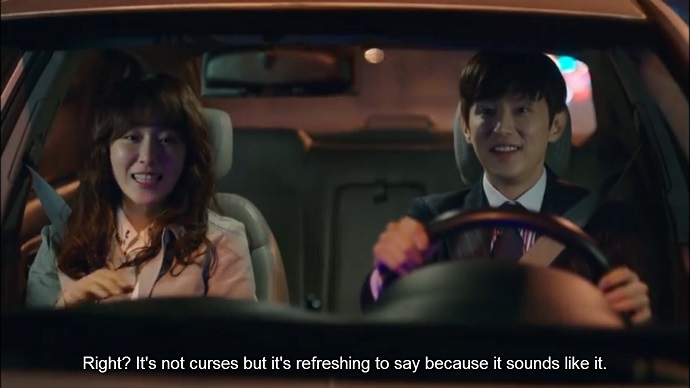 Dae Young sees Soo Ji and Sang Woo arrive home together, and happily proposes having dinner. Sang Woo turns him down and makes an inside joke with Soo Ji. Poor Dae Young continues to play third wheel when Joo Seung invites Soo Ji to join him for chicken delivery. Dae Young is told that there is not enough for him.

Dae Young reiterates his belief that Joo Seung likes Soo Ji, and she is worried that he will get hurt by his one-sided crush. She decides to put a stop to Joo Seung’s feelings before he has even confessed them. But, first, Soo Ji eats chicken with Joo Seung orgasmically.

Dae Young crashes the dinner, and tries to remind Soo Ji of her intention to address Joo Seung’s crush on her. Instead, Soo Ji decides to go get some beer with Joo Seung. At the convenience store, Hye Rim flashes her perky cleavage at Joo Seung, and his crush on Soo Ji dies on the spot. Soo Ji returns to the convenience store the next day, and finds that Joo Seung has become one of Hye Rim’s eager lackeys.

Dae Young is waiting for Sang Woo outside his office after work. Before they can escape, In Na catches up, and crashes in on their dinner. Thus, In Na is subjected to Dae Young’s outrage and one of his food lectures.

While they are eating orgasmically, In Na’s sister, Min Ah arrives unannounced, on the pretense of picking up In Na. Min Ah bluntly states that she came early to see Sang Woo, and Dae Young is ignored. After dinner, Sang Woo admits to Dae Young that, at his age, he appreciates candidness, then places Dae Young in a headlock for failing to introduce him to frank women.

Soo Ji is watching in disgust as Joo Seung and Hye Rim flirt when Dae Young arrives home. He reveals a new strategy to bag Sang Woo: be straightforward. Soo Ji agrees and integrates this approach into her novel, dreaming up a scene in which she is a femme fatale cornering Sang Woo in the elevator then boldly expressing her feelings.

Soo Ji is squealing with delight at her fantasy when she hears Dae Young also shouting enthusiastically. She goes to investigate, and finds Dae Young reading manwhas. Soo Ji eagerly joins him, and they spend the evening comfortably side by side, reading and eating bananas.

Next morning, Dae Young finds out that Sang Woo is sick. He quickly tells Soo Ji so that she may bring Sang Woo congee and medicine. Soo Ji asks Jeom Yi to show her how to cook congee, and the old woman demonstrates using abalone. Jeom Yi prepares a thermos of the congee for Soo Ji, then, to Soo Ji’s shock, asks for payment.

Sang Woo is looking pale and ailing in bed when his door bell rings. He answers the door to find the security guard offering up Soo Ji’s congee. In the end, despite getting gussied up and the long commute by bus, Soo Ji decides not to disrupt Sang Woo. She gifts Dae Young with congee when she returns home.

Jeom Yi knocks on Joo Seung’s door, but he is still working at the convenience store. Joo Seung stiffens when Hye Rim questions his age, then relaxes as she admires his skin. She is about to take a selfie of both of them, when he violently shoves her. Joo Seung comes up with an excuse for his behaviour, and Hye Rim shrugs the incident off.

Jeom Yi stops by the office of Mi Ran muttering about something missing from the roof. Mi Ran panics, thinking that her stealing from the old woman’s rooftop garden and fermentation jars has been discovered. However, Jeom Yi was actually referring to Joo Seung who she has not been able to find, despite repeat visits with trays of food. 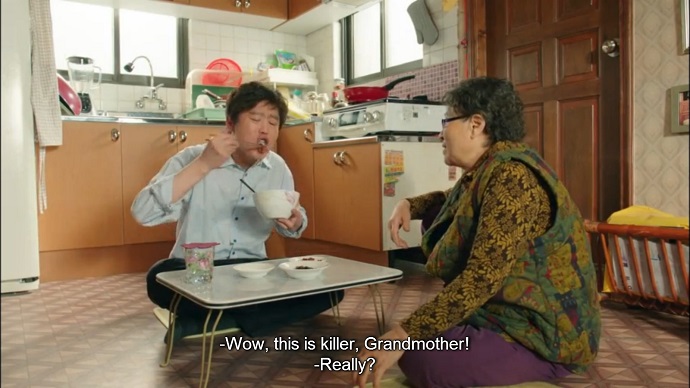 Taek Soo rides up to Jeom Yi on his woman’s bike, and she drags him back to her place for the abalone congee. Jeom Yi is trying get Taek Soo to give up his shirt to be laundered when she spots Joo Seung walking by. She drags Taek Soo up to the roof to introduce him to Joo Seung as a detective, and the younger man becomes alarmed to the point where he begins eyeing a possible weapon. When it becomes apparent that Jeom Yi knows nothing of Joo Seung’s past, and Taek Soo will not be able to help Joo Seung in his civil servant exams, Jeom Yi peevishly puts both men to work on her rooftop garden.

Joo Seung returns to his shed, tired and sore from doing Jeom Yi’s bidding. He checks his computer for the dates of the 2015 police exam schedule. He seems exasperated, but ultimately decides to continue in his bid to become a policeman. He emulates shooting a gun, and laughs creepily to himself.

Dae Young visits Sang Woo, and finds out that Min Ah has claimed responsibility for Soo Ji’s congee. Dae Young corrects him, giving the credit to Soo Ji. Sang Woo wonders why Soo Ji would do such a thing for him, and Dae Young bluntly tells him that Soo Ji likes him. Sang Woo is shocked by this revelation, and Dae Young looks exasperated by how dense the older man is. 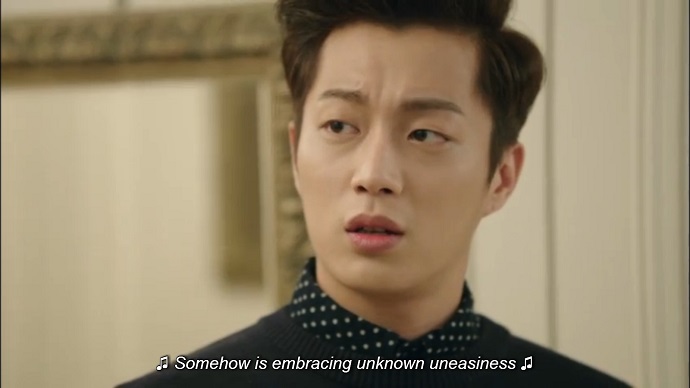 I find the character of Jeom Yi distasteful yet fascinating. She seems to enjoy collecting strays and playing the role of the kindly grandmother; she eagerly feeds Joo Seung and mothers Taek Soo. However, the thin facade drops when tested; neither Soo Ji nor Taek Soo get away with free abalone congee. Jeom Yi bluntly demands payment, and she gets it, because she is an elder. She is not universally kind either; she ignores Dae Young and is immune to his salesman charm, because he clearly does not need her.

Soo Ji definitely improved in this episode. Though she initially blames Dae Young for planting the idea of Joo Seung’s crush on her, Soo Ji does become more reflective as she wonders if her loneliness caused her to misinterpret Joo Seung’s intentions. She also showed good judgement by not delivering the congee to Sang Woo in person despite Dae Young’s encouragement. Most importantly, she has become more entertaining. Her reaction in the library to Sang Woo reading her incomplete novel did cause me to laugh aloud, as did her imaginary femme fatale character.

The menu in this episode consisted almost exclusively of chicken or seafood. 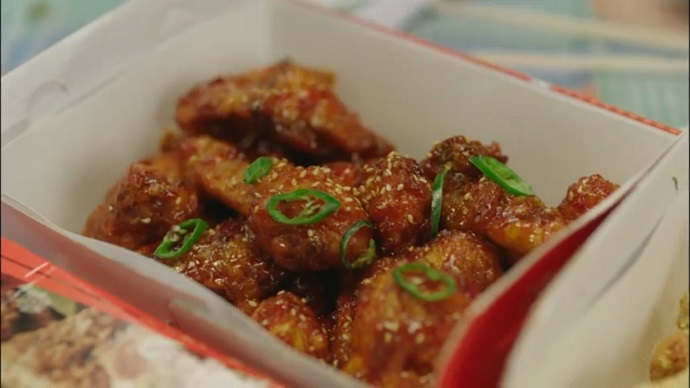 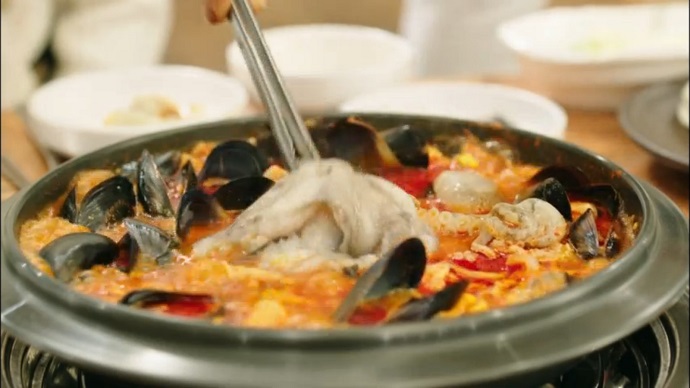 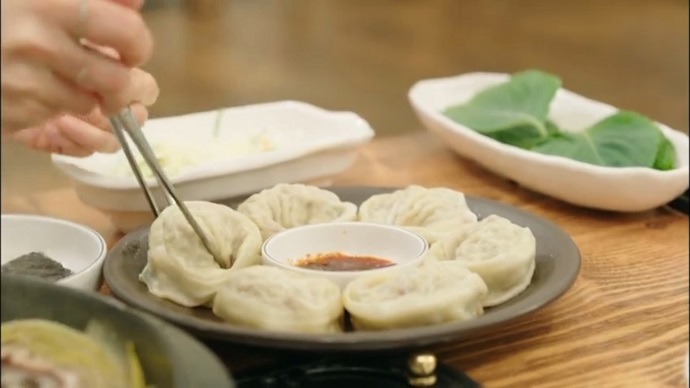