Hungover writer, Soo Ji welcomes her crush, civil servant, Sang Woo into her apartment. She is aghast to discover that the person she abused the night before was not her neighbour, insurance salesman, Dae Young, but Sang Woo. Soo Ji is shell shocked when Sang Woo proposes that they date. She recovers in time to accept his proposal as he is leaving.

Having heard the exchange from the hallway, Dae Young waits outside for Sang Woo. He is surprised at Sang Woo’s change of heart, and wonders if Sang Woo is a sadomasochist. After placing Dae Young in a head lock for his own enjoyment, Sang Woo reveals that Soo Ji makes him happy.

Dae Young finds a giddy Soo Ji rolling around on the ground in her apartment. He admits that he did not think she and Sang Woo would work out. When he mentions that Sang Woo is very concerned about gossip, it gives Soo Ji pause.

Meanwhile, Sang Woo meets up with his co-worker’s younger sister, Min Ah to break off their fledgling relationship. Min Ah is shocked, because she has never been rejected. She feigns fainting, and Sang Woo drives her to the hospital. Min Ah conveniently wakes up en route, asks a confused Sang Woo to stop the car, then runs away.

Popular waitress, Hye Rim thanks rooftop dweller, Joo Seung for mopping the floors for her. Hye Rim turns off the lights, and comes onto Joo Seung, admitting that she has liked him for a long time. It is pure fantasy, and Joo Seung wakes up in his shed with wet underwear.

Dae Young is woken up by Soo Ji for his opinion on what outfit she should wear to work, today. Dae Young doesn’t understand the fuss since the two of them have been co-workers, but for Soo Ji, the change in their relationship status makes all the difference. Dae Young appears disturbed.

Soo Ji chatters to herself while walking to work, all aflutter about Sang Woo. Fortunately, when she spots him outside the office, she remembers Dae Young’s warning that Sang Woo does not like personal gossip at work. She takes this advice to heart, and completely ignores Sang Woo as he greets her.

In the elevator alone together, Soo Ji instantly explains the reasoning behind her cold attitude towards Sang Woo. Sang Woo compliments her consideration, and Soo Ji enthusiastically agrees to a date. Her demeanor flips to indifferent again when a man enters the elevator, and Sang Woo muffles his laughter.

Joo Seung comes home to find that elderly neighbour, Jeom Yi fished his ejaculation drenched underwear from the garbage, and laundered it. Jeom Yi rebuffs Joo Seung’s embarrassment and marvels that 30 year old Joo Seung still has wet dreams since her son stopped having them in his early 20s. Joo Seung angrily tells Jeom Yi to stop worrying about him, but Jeom Yi is not at all cowed.

At the meeting, Soo Ji continues to conspicuously avoid Sang Woo under the disdainful gaze of his co-worker, In Na. Sang Woo leaves the room to pick up a delivery, and In Na informs Soo Ji that she is being too obvious about her one-sided crush on Sang Woo. When In Na points out that Sang Woo is already taken by Min Ah, Soo Ji disputes this. The women have a staring contest.

Sang Woo discovers that the delivery is a box of treats, and the deliveryman is Min Ah. An uncomfortable Sang Woo repeats his rejection of Min Ah, and Min Ah faints again. This time, Sang Woo suspects that Min Ah is putting on an act, and announces that he will fetch In Na. Min Ah immediately becomes conscious, and changes her tune, breaking up with Sang Woo before running away. 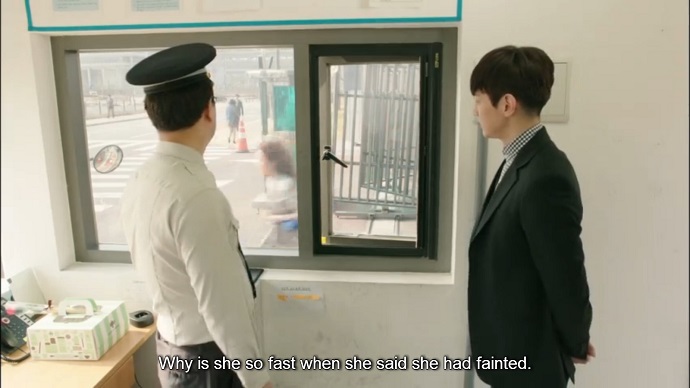 Dae Young finds his colleague Taek Soo hard at work, and proposes that they go eat. Taek Soo peevishly asks why Dae Young is not preoccupied with Sang Woo and Soo Ji. Taek Soo suddenly snaps to attention when his daughter calls. Unfortunately, she has called to ask for money just as she is about to return to Seoul after attending a B2st (Yoo Doo Joon’s band) concert in the area. Taek Soo rushes off to meet with his daughter, unashamed of the fact that he must pay to see her, leaving Dae Young alone.

Dae Young finally finds a companion, albeit an unwilling one, in Joo Seung at Hye Rim’s restaurant. Joo Seung briefly brightens up when Hye Rim decides to join them, then glares at Dae Young. Dae Young notices that Hye Rim picks out the clam shells before eating, and mentions that Soo Ji would object. Talking is replaced by the slurping of noodles.

Joo Seung mentions that this is his first time eating buckwheat pancakes, and Dae Young is incredulous considering that Joo Seung is 30 years old. They are interrupted by the arrival of a group of soldiers who are very enthusiastic when Hye Rim serves them. This prompts Dae Young to ask Joo Seung about his military service, but Joo Seung claims that he was exempt from serving. Despite Hye Rim’s return with free drinks, Dae Young persists in challenging Joo Seung’s claim. A flustered Joo Seung resorts to storming away angrily, which surprises both of his dining companions.

The water boiler in Soo Ji’s apartment is broken, and her land lady, Mi Ran is in no rush to get it fixed. Soo Ji must prepare for a date with Sang Woo, and ends up banging on Dae Young’s door to use his bathroom. Dae Young is annoyed by the intrusion until he is struck by the sight of a glowing, post-shower Soo Ji. He gets lost in the scent of her body wash before coming to his senses, and talking himself into focusing on his career.

Sang Woo stops his car in an underground parking spot, and Soo Ji jumps out of her seat and up close to his face. Sang Woo is surprised at how forward Soo Ji is, but it turns out that she just spotted In Na, and is trying to shield them from her sight.

Sang Woo curses then sheepishly explains that the civil servant version of him is different from his true self. Soo Ji seems thrilled either way. To avoid running into In Na, Soo Ji is about to suggest eating, but Sang Woo proposes that they watch a movie on his tablet in the car.

Dae Young is busy distributing insurance flyers in shopping carts, when Jeom Yi comes across him. She decides to take advantage of his car, and they go shopping together. Dae Young spies the body wash that Soo Ji used, and instantly buys several bottles. Jeom Yi gets excited at the sight of men’s underwear, and buys some for Joo Seung.

Jeom Yi is riding in Dae Young’s convertible when she spots Joo Seung overseeing the line up outside Hye Rim’s restaurant. Jeom Yi frets about Joo Seung like a misguided youth, though Dae Young points out that he is a grown man. 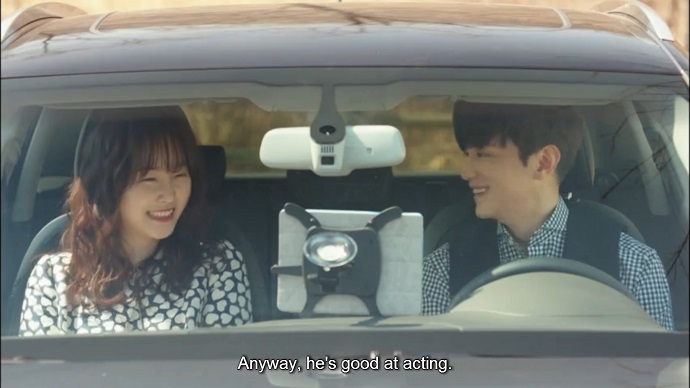 Soo Ji and Sang Woo are in his car, watching Roaring Currents, a movie he downloaded onto his tablet. Soo Ji notices that the actor, Kwon Yool looks a lot like Sang Woo, and they both praise Kwon Yool’s acting. Caught up in the movie, Soo Ji talks to the screen, and is embarrassed, but Sang Woo reassures her that he does the same while playing video games.

After the movie is finished, Sang Woo gets close to Soo Ji while putting away the tablet, then proposes going home. Soo Ji embarrasses herself again by assuming he is asking her to come home with him. They decide to go for a drive instead.

Jeom Yi is already disapproving of Hye Rim before she seats herself in her restaurant. Hye Rim manages to win over the crabby Jeom Yi by asking her to serve as a model for her beauty blog.

Later, Hye Rim meets up with Jeom Yi to hand over the product that Jeom Yi will be testing. The older woman learns that Hye Rim has been living with a friend, but the parents arrived unexpectedly so she is temporarily homeless. Jeom Yi is so preoccupied with the anti-wrinkle cream that Hye Rim gives her that she forgets to talk with her about Joo Seung.

Dae Young hears someone enter Soo Ji’s apartment, and goes to give her a new bottle of the body wash. He comes across the boiler repairman who he manhandles, thinking he is a perverted intruder. Mi Ran runs in to save her husband (a cameo by Jo Jae Yoon). It turns out that the thrifty land lady chooses to enlist her husband rather than a professional repairman.

That night, Barassi 2.0 spies something out on the street, and runs to hide in his cardboard box of a home. This scene is a non sequitur, but at least, we get to see Barassi’s adorable trick of closing the door of his enclosure by himself. 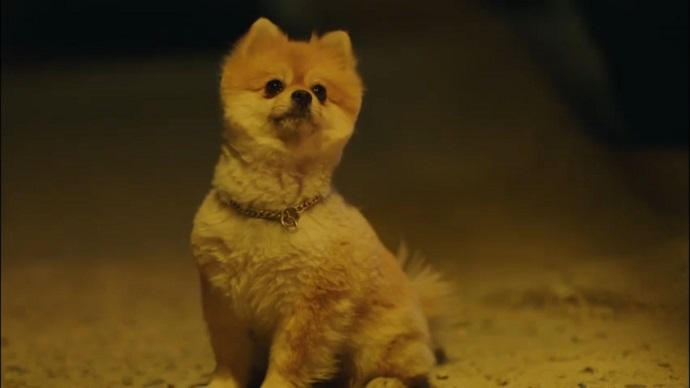 Dae Young catches Soo Ji when she returns home, but she is unresponsive. She is shocked to find out that Sang Woo is generally less bland than expected. In fact, Soo Ji had such a good time with Sang Woo that she forgot to eat. A petulant Dae Young gets up to leave, grabbing monetary compensation for the body wash and hangover medicine before departing.

Joo Seung sneaks Hye Rim to the rooftop to stay with him for a day or two. As Hye Rim goes towards the shed, Joo Seung’s expression becomes predatory.

So, the writers have decided to force a romantic connection between Dae Young and Soo Ji. They had so much chemistry as friends, and it was amusing to watch Dae Young play the reluctant cupid. Now, he’s getting cranky at the sight of Soo Ji mooning over Sang Woo, viewing Soo Ji in a new, attractive light, and buying multiple bottles of body wash so that he can sniff her.

The Dae Young end of the love triangle is a shame, because Soo Ji and Sang Woo do make a believable couple. Sang Woo appears to genuinely enjoy how ridiculous Soo Ji can be, and it is understandable. I laughed out loud when Soo Ji walked right past Sang Woo as he stood there greeting her, and her apathetic stance when a colleague joined them in the elevator was hilarious. And, who can blame Soo Ji for falling even further in love with Sang Woo as he reveals more of his true self? Between his casual swearing, his weird little voice when he is playing video games, and his bemused reaction to Soo Ji and Min Ah’s craziness, he has become the “Let’s Eat 2” heartthrob.

One major disappointment about this episode: they only featured one meal. 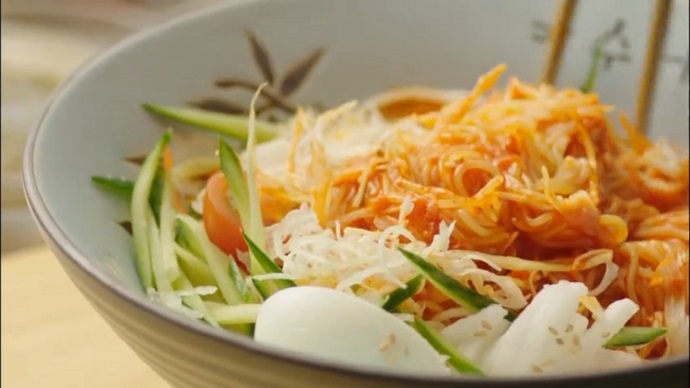 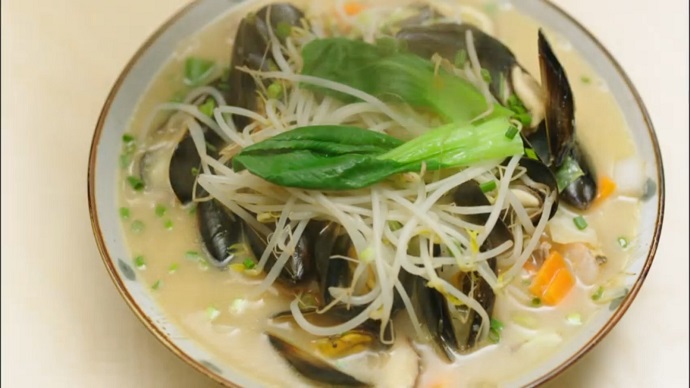 This did not look spicy to me, but who am I to argue with Dae Young. 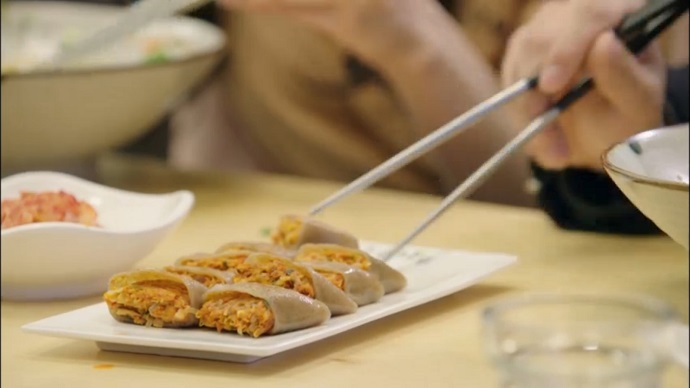