Side dish: While commiserating with her brother-in-law, it looked like Soo Jin was chewing on some dried seafood snack. Serious Eats gives a rundown of their favourites here.

Bang Myeong Soo (Byun Yo Han) is caught up in a tempest of his ex-girlfriends who are in a tizzy over his personal dating history webtoon being turned into a movie.  Snobby, but violent Jang Hwa Young (Lee Yoon Ji) objects to having herself further humiliated on the big screen. Cool Na Ji Ah (Jang Ji Eun) seems unconcerned about the exposure, but does not want to participate if it means having to interact with the other ex-girlfriends. Sexy 22 year old Ra Ra (Hwa Young) just seems content with taking pot shots at the other two women.

PD Kim Soo Jin (Song Ji Hyo) tries multiple times to intervene, but is repeatedly shoved aside. The ex-girlfriends are only silenced when creditors arrive to collect money from Soo Jin’s company. Soo Jin takes the creditors aside and asks for a three month reprieve. However, even if they were not required to pay the principal for three months, they would need to pay the overdue interest, which comes to $30,000 per month.

After the office has been cleared of ex-girlfriends and creditors, Soo Jin takes issue with Myeong Soo for failing to inform his exes about the webtoon. Myeong Soo counters with outrage at being kept ignorant about the financial state of the company. When Soo Jin’s colleague, Song Eun Hye (Kang Soo Jin) asks Myeong Soo to handle his ex-girlfriends, he elects to escape in order finish his webtoon, instead. Eun Hye wonders how Myeong Soo was able to bag so many attractive women, and Soo Jin is at a loss to explain his charm. 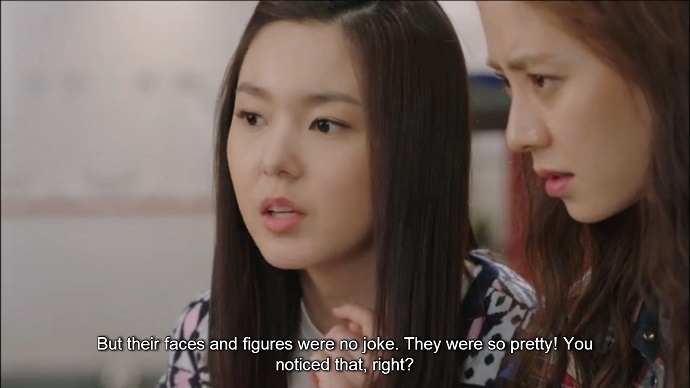 Soo Jin decides to meet with the ex-girlfriends by herself. Ji Ah is a married woman in her mid-thirties who was Myeoung Soo’s first love. She maintains an amicable relationship with him, and does not approve of the movie deal, because she believes that Soo Jin’s production company is suspect. Ra Ra is an actress with a wholesome public image to maintain. She objects to the movie for fear of exposing her dating history. Soo Jin leaves her meeting with Hwa Yeong until last for fear of her wrath. However, the well educated Hwa Yeong chooses to threaten her with a lawsuit instead of assault.

Myeong Soo and Soo Jin meet with a script writer (cameo by Jang Won Young) who wants to increase the sexiness of the webtoon by having the male lead date all three women at once. He then inserts a revenge plot in which the women team up against the male lead. Soo Jin appears receptive, but Myeong Soo is appalled. Afterwards, he begs Soo Jin to take on the script writing, but Soo Jin points out that as PD, she already has her hands full.

As PD, one of Soo Jin’s responsibilities is to garner funding for the movie. At an investor’s convention, she gives a presentation about Myeong Soo’s webtoon, then hustles the room. After experiencing the high of finally meeting with a receptive prospective investor, Soo Jin spies Myeong Soo fraternizing with frenemy, Shim Ji Hee. When she joins them, Myeong Soo seems oblivious to the animosity between the two women. Myeong Soo steps away to socialize with some female acquaintances, and Soo Jin marvels at what a chick magnet he is, claiming not to understand his mass appeal. Ji Hee freely admits that she wants him both personally and professionally.

Late that night, Soo Jin is working while Myeong Soo is snoozing. He sits up after receiving a text, then runs out after discouraging Soo Jin from following. The next morning, Soo Jin learns that Ji Hee had bought the rights to an unidentified webtoon, and becomes worried. She goes looking for Myeong Soo at his home, and catches Ji Hee shaking hands with him before leaving.

When Soo Jin confronts Myeong Soo and asks if he has anything to confess, he ends up revealing that he works part-time at Ji Ah’s restaurant. Soo Jin is then repeatedly embarrassed before Ji Ah. Myeong Soo rebukes Soo Jin for thinking he made a deal with Ji Hee, Ji Ah reveals that she is divorced and therefore free to have any kind of relationship with Myeong Soo, and Myeong Soo actually enjoys seafood, just not with Soo Jin.

Outside the restaurant, Soo Jin complains about Ji Ah’s objection to the movie and about Myeong Soo keeping their work arrangement a secret. Myeong Soo has a justification for every complaint. A frustrated Soo Jin wonders aloud why a woman like Ji Ah would date Myeong Soo, and Myeong Soo has no answer since it was Ji Ah who picked him up at a club. Soo Jin’s hostility leaves Myeong Soo at a loss for words, and creates an uncomfortable silence. Fortunately, Eun Hye calls Soo Jin at that moment to announce that an investment has come in from the company whose representative Soo Jin met at the investor’s convention. She and Myeong Soo are overjoyed until they realize that the company is the one Hwa Young works for. 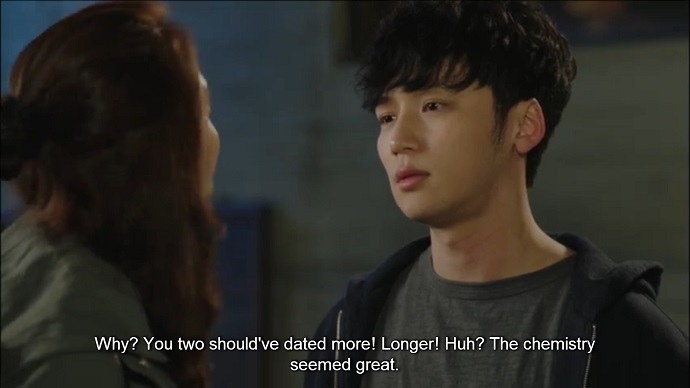 Though Myeong Soo reassures Soo Jin that Hwa Young’s involvement is a good thing, he confronts Hwa Young to find out what her intentions are. It turns out she is engaged to a chaebol whose family company she works for. Thus, she cannot afford to have her dating history made known. In retrospect, she regrets dating Myeong Soo, and leaves after threatening him.

Soo Jin and Eun Hye end up receiving surprise visits from all three of Myeong Soo’s ex-girlfriends. Hwa Young confronts Soo Jin thinking she sent Myeong Soo to speak on her behalf. Ra Ra comes calling after hearing about Hwa Young’s investment, and worries about having her character pushed out of the limelight. Ji Ah arrives to accuse Soo Jin of being money grubbing and a leech on Myeong Soo.

Speaking with her brother-in-law, Soo Jin admits that she is sympathetic to the worries of the ex-girlfriends about having their personal lives exposed. The brother-in-law questions what Soo Jin’s reasons are for doing the movie. For Soo Jin, it is a matter of survival, even if it means leeching off of Myeong Soo to succeed.

Soo Jin thinks back to the time Myeong Soo visited her on a movie set and helped her clean up the site after filming. Myeong Soo gave her a flip book that he had illustrated for her birthday showing the sun rise on the beach. He promised to visit the ocean side with Soo Jin when they become professionally successful in their 30s. 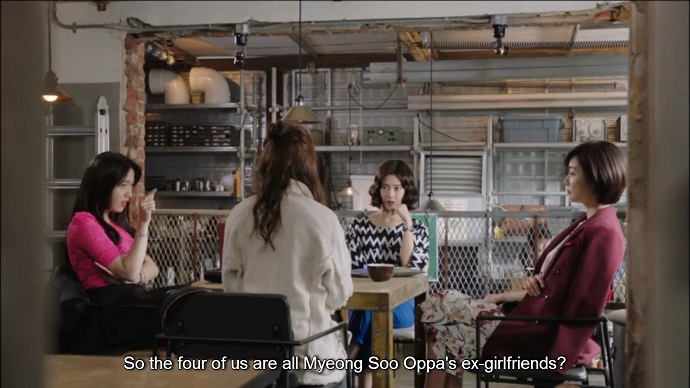 A frustrated Myeong Soo is working on his webtoon when he is summoned to join all four of his ex-girlfriends getting tipsy together. They now all seem agreeable to the movie. Ra Ra reveals that they are all aware of his relationship with Soo Jin, and a confused Myeong Soo denies that he and Soo Jin ever dated, claiming that they were only good friends. Soo Jin stumbles out of the room in shock.

A humiliated Soo Jin steps outside then suddenly returns to grab Myeong Soo’s shoes, and pitch them into a muddy puddle. Soo Jin storms back to the table, shoves Myeong Soo aside, and threatens to chew up any ex-girlfriend who interferes with her movie. Then, Soo Jin whips her head around to aim a death stare at her ‘best friend’, Myeong Soo. 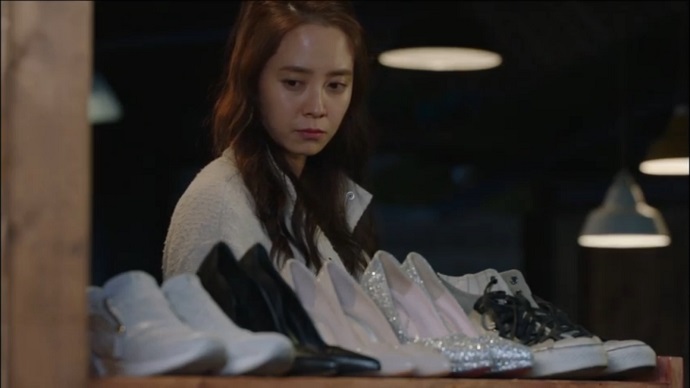 The gauntlet of humiliation continues for Soo Jin. So, it appears that Soo Jin was unknowingly slotted in the friend category by Myeong Soo. It boggles my mind how often a K-drama female lead thinks she is dating a guy who she has never been physically intimate with. However, this revelation was just the latest in a series of encounters in which Soo Jin had to swallow her pride: the creditors, the ex-girlfriends, prospective investors, and Myeong Soo. Myeong Soo’s careless attitude towards Soo Jin cut the deepest, which would explain why Soo Jin frequently lost her temper with him while claiming indifference. Meanwhile, in the face of Soo Jin’s rage, poor Myeong Soo is clueless about why his friend is acting like a jilted lover.

The entire dynamic between Myeong Soo and Soo Jin has been highly watchable, because Song Ji Hyo and Byun Yo Han have done such a good job of conveying how messy their characters’ feelings and relationship are, in a realistic way. When Soo Jin repeatedly questions what makes Myeong Soo attractive to so many women, I can’t tell if she is questioning her own attraction or if she is just jealous of the attention he receives. Similarly, it is unclear just how oblivious Myeong Soo is to Soo Jin’s feelings as well as his own.

I did not enjoy Soo Jin going feral in the final scene, but at least, she was finally demanding respect. I hope this signals the end of this requisite stage of the K-drama in which the female lead is repeatedly dragged down in order to hit rock bottom. Can it really get worse than having your memories of love destroyed by the object of your affections?