No one in their right mind would tune into Korean dramas for the smut. Lucky for you, we’re not in our right mind, so let’s take a look at how sex is represented in Korean dramas.

Pounding the rice cake: “Fated to Love You”

Possibly one of the most entertaining sex scenes in Korean dramas happened when Gun (Jang Hyuk) and Mi Young (Jang Na Ra) follow a ridiculous series of coincidences and a huge dose of aphrodisiac into bed. In the dark, the two of them slowly move towards each other, their limbs tangle, and they take the inevitable next step of dressing up in hanbok and pounding rice cakes. “Fated to Love You” made good use of a Korean euphemism to create what may be one of the cutest sex scenes ever. – Only 만

In both of these K-dramas, the female lead has an alcohol fueled one-night stand in a love motel with a younger man. Unfortunately, “I Do, I Do” only shows the aftermath with Ji An (Kim Sun Ah) waking up next to Tae Gang (Lee Jang Woo). They roll back and forth as both of them attempt to remain under the sheets while collecting their clothing from the side of the bed.

“What’s Up, Fox?” does offer some of the magic of the night before. Byung Hee (Ko Hyun Jung) is drunkenly sobbing when Chul Soo (Chun Jung Myung) sits down on the heart-shaped water bed to comfort her. She mistakes him for another man, and starts kissing him before launching a full on assault. The sober Chul Soo resists in slapstick fashion before suddenly giving in. The next morning, Chul Soo sits fully dressed by the bed, waiting for Byung Hee to wake up. When she does, there is more than enough embarrassment to go around. – Junggugeo Kaenada 중국어 캐나다

Candles and couple mugs: “Healer” and “Bride of the Century”

It’s telling that I had to remind myself that there was a bed scene in “Bride of the Century”, even though Doo Rim (Yang Jin Sung) and Kang Joo (Lee Hong Ki) produced a baby in a later episode. Upon review, I discovered that their bed scene had consisted of the two of them sitting upright in bed, with their arms around each other, fully dressed, in a candlelit room. In voiceover, Kang Joo vows that their lives will progress together from this moment, and then the lights dim. The next morning, neither one of them even has messy hair, though they are wearing the same clothes.

“Healer” didn’t take itself it quite so seriously, and Young Shin (Park Min Young) and Jung Hoo (Ji Chang Wook) went from kissing at the end of one episode to waking up together at the beginning of another. I might not have known anything had happened (they’re both fully dressed and he was sick), if not for my Twitter feed pointing out that their shoes were entwined, and that couple mugs had suddenly appeared out of nowhere (yes, really). All I know is that I’m glad I’m not a kid watching this, because I would end up with some really strange ideas. – Only

Did They or Didn’t They? “Secret Love Affair”

Considering that the series title promises illicit sex, this K-drama was absurdly coy about its depiction of the deed. When 40 year old Hye Won (Kim Hee Ae) sits waiting in the bed of 20 year old Sun Jae (Yoo Ah In) while wearing his shirt, the next step seems obvious. Instead, what follows is a puzzling montage of inanimate objects in Sun Jae’s modest apartment accompanied by suggestive conversation between the lovers, then some panting. Did they have sex or not? Regardless, a good sex scene should not provoke bewilderment and debate. – JK

The kiss and the cutaway: “Coffee Prince” and “City Hall”

The first K-drama I ever watched, “Coffee Prince” featured the classic TV sex scene trope, the kiss and the cutaway. Whereas other dramas left some room for doubt, “Coffee Prince” did not. Having tried repeatedly to kick her out of his bachelor pad, Han Gyul (Gong Yoo) warns Eun Chan (Yoon Eun Hye) of the consequences of staying in his apartment. Regardless, Eun Chan worms her way in, and Han Gyul’s already weak defences crumble. They kiss, he picks her up, and they get to the bed without coming up for air. Of course, they cut away before clothes come off, but when they cut back in, there’s little confusion about what went on. This scene is fantastic for many reasons: it conveys heat, intimacy, and two consenting adults who actively want to be together. There’s nothing explicit here, but their kisses were pretty fiery.

“City Hall” also featured mature leads who both soberly consented to have sex, and enjoyed it. Frankly, their first kiss was much hotter, but Shin Mi Rae (Kim Sun Ah) and Jo Gook (Cha Seung Won) are notable, because they took the unusual step of planning sex ahead of time. – Only

All talk, little action: “I Need Romance 3” and “Soulmate”

These two K-dramas took inspiration from “Sex and the City” for a purported frank look into the contemporary dating scene in South Korea. Unfortunately, both shows featured more lip service than action. “Soulmate” secondary character, Min Ae was a sexually aggressive woman who sleeps with Ryohei on their first meeting. Though, we can only construe this based on the fact that he makes her breakfast the next day in her kitchen. Plus, Min Ae gets punished for her sexually liberated ways, most notably by having water poured over her head.

The audience and Wan, male lead of “I Need Romance 3” are introduced to Joo Yeon with her feigning an orgasm over the phone. Thereafter, it’s all conversations about sex rather than engaging in it. Even at the end, when Joo Yeon and Wan are in bed, the deed is only confirmed when Joo Yeon says she is hungry, and enjoys being hungry after sex. Excuse me while I vomit a little in my mouth. – JK

Love is the moment: “Heartless City” and “Heart to Heart” 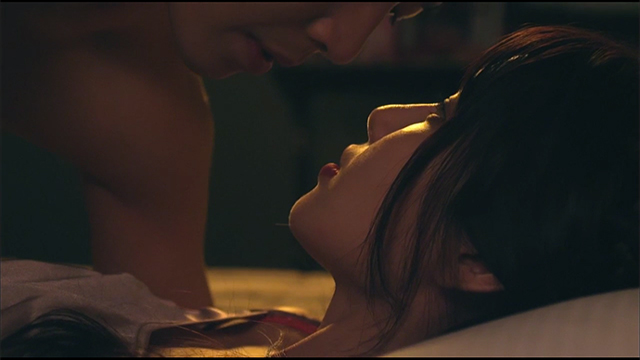 “Heartless City” and “Heart to Heart” are the only two shows on this list to actually depict the deed. In “Heartless City”, Soo Min (Nam Gyu Ri) is poking light-hearted fun at a silent Shi Hyun (Jung Kyung Ho), when he grabs her hand, and kisses her. She more than meets him halfway as the room spins on its axis. They move locales to her apartment, and it’s not long before the two of them are sharing a tender moment in bed. I had to pick my jaw up off the floor as he kisses her and starts moving. To clarify, this scene was by no means explicit (it’s still a K-drama); it just got further than any other drama I’ve seen before or since.

In “Heart to Heart”, Hong Do (Choi Kang Hee) and Yi Seok (Chun Jung Myung) got as far as taking their clothes off in bed, but cut away before they got further. It’s in the next episode’s flashbacks that we see what happened, when Hong Do is reliving the night before while hiding in the closet. Again, nothing explicit, except for an intimate look at post-coital cuddling. What actually made me blush (no, not really) was how happy they were together. – Only

Readers: Which Kdrama scenes made you blush? Let us know in the comments below.