Skip to content
Side dish: What Soon Ae really wants Sun Woo to make for her is blood sausage stir fry. He can follow the recipe for Soondae Bokkeum at iFood.tv.

Soon Ae finds herself shaken by the experience, and must remind herself that she is playing support to Bong Sun. She repossesses Bong Sun’s body the next day, and focuses on her goal of sleeping with Sun Woo, while Sun Woo attempts to keep things professional in Sun Restaurant, and to hold Soon Ae’s libido at bay.

Meanwhile, Sun Woo’s brother-in-law, policeman Sung Jae (Im Ju Hwan) receives news that his colleague, Officer Han is in the intensive care unit of the hospital. Sung Jae pretends to be shocked, but he is ready to permanently silence Officer Han in order to keep his crime a secret. Only Officer Han’s claim that he doesn’t remember the assault saves him, though he secretly recognizes Sung Jae’s watch.

Soon Ae and Sun Woo have a fancy dinner on their first date, but Soon Ae has only sex on the mind. Sun Woo finds himself having to argue in favour of abstinence while Soon Ae acts insufferable to protest. Later, Bong Sun takes Sun Woo’s side, much to Soon Ae’s annoyance.

Sun Woo’s sister, Eun Hee (Shin Hye Sun) admittedly knows very little about her husband’s past other than the fact that he was an orphan. What Sung Jae doesn’t tell her is that he was neglected by his parents in favour of his younger brother. After a bad beating by a another boy, a dark spirit came across the young Sung Jae, though the outcome of this encounter is not revealed.

Sous chef, Min Soo (Kang Ki Young) becomes unbearably obnoxious on his birthday as his colleagues feign ignorance to cope. After suffering his petty punishment, the cooks decide to switch strategy and present Min Soo with impromptu cake and a re-gifted faux leather belt. This pleases Min Soo and he generously uses Sun Woo’s credit card to buy food and drinks for his colleagues, while he and Soon Ae bar Sun Woo from attending.

Sung Jae comes across Soon Ae’s father and brother, still grieving over her death. He notices that the father’s shoe laces are tied in the unique way Soon Ae used to use, but the father credits Bong Sun for this latest example of the technique. This reference to Bong Sun gives Sung Jae pause.

A tipsy Soon Ae complains to Cordon Bleu trained chef, Joon (Kwak Si Yang) about not being able to get Sun Woo into bed, though her problem is framed as a friend’s issue. Joon calls Sun Woo a decent guy, and tells Soon Ae to hold on to him.

After a raucous night of chicken and beer, and karaoke, Soon Ae and her four male colleagues end up in a motel room. An alarmed Sun Woo finds out via his credit card spending report, and immediately goes to fetch her. Sun Woo piggybacks Soon Ae away, forces her to drink water to sober up, and orders her to stay close to him from now on. He proposes that they proceed slowly, and a subdued Soon Ae appears to be convinced.

Soon Ae and Sun Woo sit outside holding hands, having agreed to take things slowly. Their tender moment is interrupted by the arrival of Sun Woo’s mother bringing the cream buns he loves. The couple quickly separate, and Soon Ae pretends to go home. However, mom is not fooled, and bluntly asks if they are using contraception, to Sun Woo’s horror.

After Soon Ae and Sun Woo have an adorable separation for the night, Soon Ae sneaks out of Bong Sun’s body to watch Sun Woo sleep. She is infatuated with Sun Woo, but she hides her feelings when Bong Sun catches her outside Sun Woo’s room. Sun Woo, in turn, finds Bong Sun outside, talking to Soon Ae, and thinking she is talking to herself as a result of the heat, fixes a fan for her. Soon Ae can only watch while Bong Sun and Sun Woo have a tender moment.

Sun Woo’s mother finds out Soon Ae’s birthday and when she presents the date to Suhbingo, the shaman announces that the person with that birth date died young, much to the confusion of Sun Woo’s mother. Suhbingo becomes flustered when she realizes that she has been presented with Soon Ae’s birthday. Mom then presents the birth date of Sun Woo’s long time friend, PD So Hyeong (Park Jung Ah), and Suhbingo predicts a a good life with a destined match. Suhbingo’s reading gives Sun Woo’s mother hope, and she goes straight to So Hyeong to confirm that the PD is interested in Sun Woo.

Sun Woo creates an elaborate excuse to take Soon Ae to the market. They hold hands in the car, and get mistaken for a married couple by one of the vendors. When they run into Soon Ae’s father, she eagerly introduces him to Sun Woo, then offers him a ride back to his restaurant. Her father apologizes to Sun Woo for the state of his establishment, explaining that it went downhill after his daughter left them three years ago. Sun Woo ends up helping to connect a water hose for Soon Ae’s dad, and the older man prepares a rice lunch as thanks. Sun Woo accepts the meal in spite of his aversion to rice.

Soon Ae and Sun Woo return to the restaurant late, and Sun Woo suffers indigestion. Soon Ae scolds him for forcing two bowls of rice down, but Sun Woo could not refuse food from an elder who has obviously experienced tragedy. Soon Ae is visibly touched.

Later, Sun Woo and Soon Ae frolic in a playground to help his indigestion along. Soon Ae declares her feelings for Sun Woo, and reveals that being with him has exposed her to so many new experiences. This admission prompts Sun Woo to suddenly propose an overnight trip. Soon Ae is unsettled, despite the fact that she has been nagging Sun Woo for just such an opportunity for intimacy.

While dropping off Eun Hee at Sun Restaurant, Sung Jae recognizes Soon Ae’s singing coming out of Bong Sun’s mouth. This prompts Sung Jae to begin investigating Bong Sun. Alone at home, Sung Jae takes out Soon Ae’s broken cell phone. He reminisces about Soon Ae running in fear for her life at night then recalls enjoying a drink while regarding an unidentified body on the bathroom floor. Sung Jae decides to pack Soon Ae’s cell phone away in a suit case containing other evidence of his dark side. Later, Sung Jae sneaks into Bong Sun’s room, and after some rummaging, angrily whips some of her ghost warding talismans on to the ground. 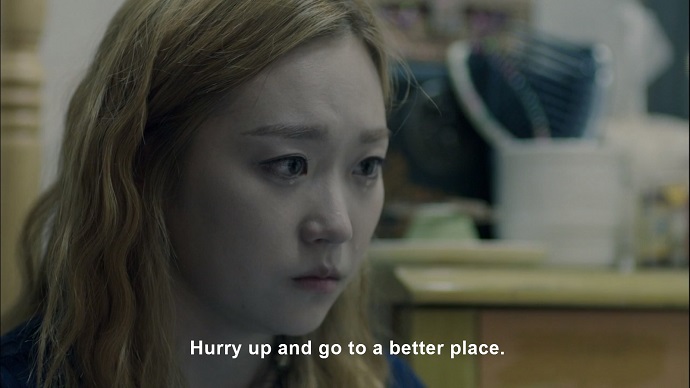 Soon Ae goes to visit Suhbingo to talk about the overnight trip with Sun Woo. She is as perplexed as Suhbingo by her lack of enthusiasm for this anticipated development. Soon Ae realizes that she has fallen for Sun Woo, and Suhbingo warns her that ghosts do not have the luxury to indulge in human emotions, because it will cause her to remain as an evil spirit. The shaman clearly sympathizes with Soon Ae, but she also feels guilty enough about unleashing the ghost onto Sun Woo that she treats his mother to a pricey lunch.

The next day, Soon Ae goes to visit her father to say goodbye, believing that she will resolve her grudge and pass on when she spends that night with Sun Woo. She attempts to rouse personal enthusiasm for their overnight trip, but is clearly suffering from misgivings. 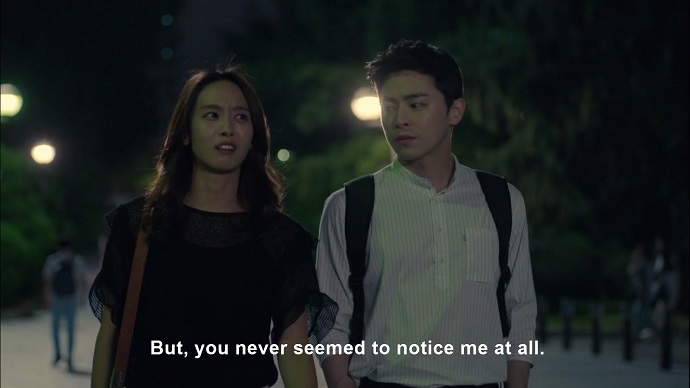 Sun Woo has closed the restuarant down early in anticipation of their overnight trip, but is called away by his intoxicated mother. However, it turns out to be a trick to get Sun Woo on a dinner date with So Hyeong. So Hyeong admits that she was first attracted to Sun Woo before she even met his friend, but an impatient Sun Woo interrupts her confession to announce that he is dating someone. A humiliated So Hyeong quickly retreats.

Soon Ae purposely ignores Sun Woo’s calls, because she is not ready to leave this world. By the time he finds her, it is too late to go on the overnight trip. An apologetic Sun Woo cooks her a meal in the Sun Restaurant kitchen, makes her a Romantic Cocktail, then pitches a tent on the roof to create the feel of an overnight trip. Sun Woo reveals that he rejected So Hyeong, and Soon Ae is so touches by his commitment to their relationship that she willingly falls back into the tent with him where Sun Woo begins to undress both of them.

As much as I have liked Soon Ae, I fear that the writers have created a situation that can only turn her into a selfish interloper.

I was starting to find Soon Ae’s repeat harassment of Sun Woo for sex in episode 9, tiresome. Her single minded pursuit was understandable for self-preservation, but really created a farcical barrier to a long term relationship between Sun Woo and Bong Sun.

In episode 10, Soon Ae started to realize that her feelings for Sun Woo go beyond sexual desire. Unfortunately, the result of this awareness is that Soon Ae continues to stand in between Sun Woo and Bong Sun with only a future as an evil spirit as the expected outcome.

As a result, it was impossible to enjoy the scene of intimacy between Sun Woo and Soon Ae at the end of episode 10. Knowing that Soon Ae is using Bong Sun’s body to engage in an act of intimacy that she is not entirely ready for just made the entire scene icky.

About the only character who improved in episodes 9 and 10 was Joon. His amusement at the developing romance between Bong Sun and Sun Woo was a nice light touch, and surprising given the usual preference by writers for the drama of jealousy. I don’t see how Joon can have a more significant role in the show, but wouldn’t it be nice to see more of this.