Junggugeo Kaenada 중국어 캐나다: I finally finished “Bad Guy” this week. The first 14 episodes were easy to consume, and then, the last three lost momentum and went bat shit crazy.

Only 만: What prompted you to watch “Bad Guy” in the first place?

Junggugeo Kaenada: I have been on a tear with melodramas. It started with the insanely addictive “Mask” then continued with the hot mess of faux incest, “That Winter, the Wind Blows”. The premise of “Bad Guy” sounded convoluted and ridiculous enough to be promising. Initially, it was entertaining to watch Kim Nam Gil as the titular character, wreaking havoc in a chaebol family with the most casual execution of vengeance that I have seen. Plus, Kim Jae Wook plays the illegitimate son whose main occupation appears to be creating grief for his family.

Only: Did Kim Nam Gil’s mid-series enlistment have an effect on the end of the show?

Junggugeo Kaenada: In the last few episodes, Kim Nam Gil’s character, Gun Wook disappeared for long stretches, and the void was obvious. I did not realize what a driving force Gun Wook was until everyone attempted to carry on without him. However, the situation must have sent the actors and the production team into a panic. The story literally descended into madness, while the writers lost all sense. Surprisingly, I was still bored.

Only: Not to be shallow here (too late), but did “Bad Guy” at least look good?

Speaking of men taking off their shirts, the impression that I am getting from you is that it is the main occupation of “Padam Padam”.

Only: I think the main occupation of “Padam Padam” is to confound me, because every time I start wondering what’s going on with the story, either Jung Woo Sung or Kim Bum takes his shirt off and I lose my train of thought. The first couple of episodes featured a scene in a prison shower that went on for what seemed like hours, and I had no idea what was going on, thanks to Jung Woo Sung’s fantastic shoulders.

Junggugeo Kaenada: I don’t know if I can get a clear sense of whether “Padam Padam” is a good show or not, based on your feedback. What about the plot? The acting? The romance? 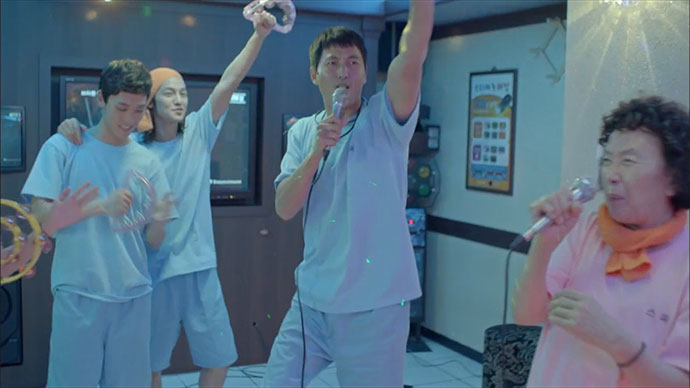 Only: I’m having the same problem, and I’m watching it. Jung Woo Sung turns in a good performance as Kang Chil, an ex-con who gets out of jail after 16 years. Between restarting his life, and trying to figure out the truth of his case, the show is a little convoluted. Throw in Kim Bum as an angel in training, and Han Ji Min as a hostile vet with a connection to his past life, and I’m as lost as Kang Chil is a lot of the time. But, I’m only up to episode 9 at the moment, so maybe by the end, I’ll have it sorted out. In the meantime, the fact that it introduced me to the concept of the combined noraebang jimjilbang is enough to keep me happy.

Junggugeo Kaenada: I am currently watching “Twenty Again” and I have mixed feelings about it. Four episodes in, and I am not enjoying how everyone is mistreating and disrespecting the female lead, Ha No Ra (Choi Ji Woo). Yet, I am still curious enough about No Ra’s impending transformation and triumph to keep watching. Plus, Lee Sang Yoon is cute in spite of playing a scowling jerk. 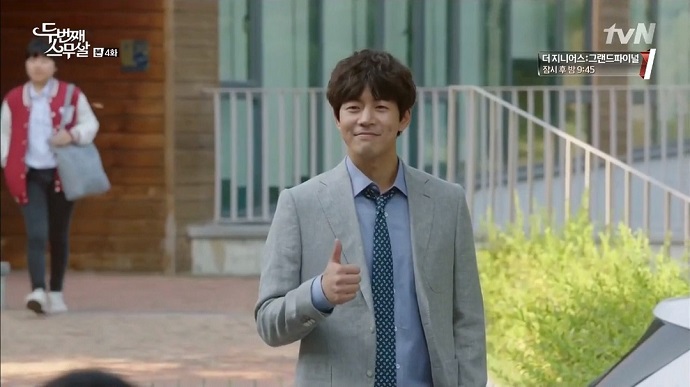 Only: Lee Sang Yoon being cute is a given, even when he’s playing a jerk like Hyun Suk. I haven’t caught up with this week’s episodes of “Twenty Again”, but I had the same problem you did; it was painful to watch No Ra get kicked around by everybody, while she desperately tried to please her contemptuous ex-husband. At the end of episode 2, when she told Hyun Suk off, I was hoping she was going to take some of that attitude home to her soon-to-be ex. But, from your description, that’s not the case.

Junggugeo Kaenada: Well, Lee Sang Yoon’s embittered professor and one of No Ra’s classmates appear to have taken pity on her. I do not like that No Ra must rely on the compassion of others rather than her own gumption to advance, but it will be a relief to finally see her winning at life.

What are your viewing plans for the coming week?

Only: I’m a little behind on “Last”, so I’m hoping to catch up and finish it off. It’s not my usual type of show, but I was enjoying it until the Straw Cutter storyline took the wind out of my sails. But, by tomorrow I’ll have six episodes to catch up on, so hopefully it picks up. The face-off between Tae Ho (Yoon Kye Sang) and Heung Sam (Lee Bum Soo) is pretty good, but I’m also enjoying Kim Hyung Kyu as stone-faced evil henchman, Mantis.

Plus, I need to check in on “Padam Padam” to see whose abs I get to admire in the next episode.

Junggugeo Kaenada: I am going to try “Padam Padam” to see these abs for myself.

Readers: what have you been watching?