Skip to content
Side dish: Everyone on this show is bananas. Speaking of bananas, here’s a recipe for Glutinous Rice and Chinese Sausage Wrapped in Banana Leaves from Serious Eats. 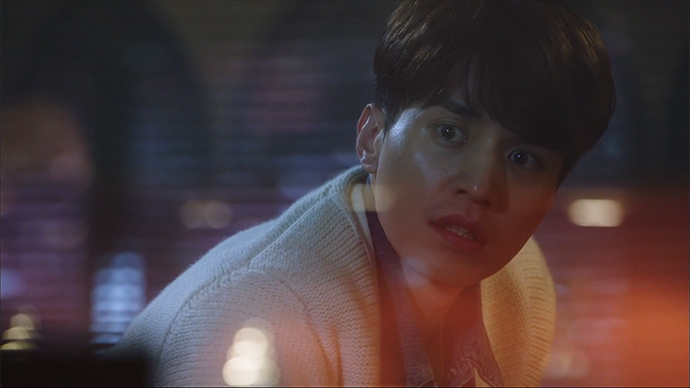 As Ri Hwan (Lee Dong Wook) bursts into the radio station in search of Haeng Ah (Jung Ryeo Won), Haeng Ah’s ex-boyfriend, Suk Joon (Lee Jong Hyuk) closes the door in his face and backs Haeng Ah into a corner where Ri Hwan can’t see her. Not realizing that Ri Hwan is the one outside the soundproof door, Haeng Ah hides, not wanting to give away her presence in the radio booth alone with Suk Joon to their co-workers.

It doesn’t take long for Ri Hwan to figure out another way in, by setting off the fire alarm. He stalks in to the radio booth, past a surprised Haeng Ah, and punches Suk Joon in the face. Unfazed, Suk Joon punches him back and the two men stare at each other. Their faceoff is interrupted by the arrival of a security guard and station manager, Dong Il (Park Won Sang). It’s now Ri Hwan and Haeng Ah’s turn to stare at each other, as Suk Joon walks away with Dong Il. In the midst of Dong Il’s general complaints about drama, Suk Joon discovers that Ri Hwan is actually dating downtrodden dentist, Yi Seul (Park Hee Von), a chaebol. Suk Joon wonders if Haeng Ah is also aware of this, and Dong Il assures him that she is.

A reluctant Haeng Ah lets Ri Hwan drive her home. In the car, Ri Hwan surprises her and himself with how vehemently he hates Suk Joon. Ri Hwan drops Haeng Ah at the home of her cranky friend, Tae Hee (Kim Ri Na). That night, Suk Joon’s repeated phone calls go unanswered as Haeng Ah tosses and turns while trying to sleep on Tae Hee’s floor.

Back at home, a dispirited Ri Hwan comes in to find his drunken co-worker/flatmate Ji Hoon (Lee Seung Joon) watching TV and drinking beer. Ri Hwan tries to explain things to Ji Hoon by using the entertaining metaphor of a crappy bar as a stand-in for Suk Joon. It doesn’t take long for Ji Hoon to figure out what really happened, but he fails at comforting Ri Hwan.

Instead, when Ji Hoon passes out, Ri Hwan goes straight to Haeng Ah. At a nearby park, Ri Hwan apologizes for startling Haeng Ah, and agrees to put aside his dislike of Suk Joon if she really likes him. However, Haeng Ah is determined to break up with Suk Joon, and the two of them joke about memories of high school instead.

As the tension drains between the two of them, Haeng Ah tells Ri Hwan how she tried to make herself feel better by pressing on a pressure point. She has the wrong one, of course, prompting Ri Hwan to show her the right one, which is further up on her wrist. As he holds her wrist and counts down, everything goes still and the two of them stare into each other’s eyes. Oh my.

The next morning, on her way to work, Haeng Ah tries to call Yi Seul, but Yi Seul ignores it. Diva DJ Se Young (Kim Jung Nan) comes in to work with the sole male member of their team, Joon Soo (An Woo Yeon) in tow, and runs into Suk Joon in the elevator. Despite his obvious indifference, Se Young invites Suk Joon to appear on her show. He sounds condescending as he agrees to talk to her PD (Haeng Ah) about it, then politely leaves.

Ri Hwan goes to pick up his mother, Sun Young (Bae Jong Ok) from the hospital where she is a doctor. On their way out, another doctor asks her for a file, but when Sun Young returns to the office to get it, she’s disoriented and has no idea why she had the file in the first place. Over what looks like a spectacular lunch (that no one eats, how sad), Sun Young starts grilling Ri Hwan about his relationship with Yi Seul, but the conversation inevitably turns to Haeng Ah. Things get heated when Ri Hwan insists that Sun Young should leave Haeng Ah alone, but Sun Young insists that Haeng Ah needs to get tested for the same illness that killed her parents. Ri Hwan points out that it was just bad luck that killed them. He’s taken aback when Sun Young vehemently wishes that Haeng Ah had gotten married and disappeared from their lives.

Back at the radio station, Haeng Ah, Tae Hee and Dong Il are summoned to a meeting at Suk Joon’s office, but it’s just a pretext to talk to Haeng Ah. She refuses to play along and leads him to the roof to talk instead.

Meanwhile, Dong Il tries to justify Suk Joon’s behaviour to Tae Hee, who doesn’t buy it, though she does confess that she used to be Suk Joon’s fan. Dong Il is suddenly struck by her smile, but Tae Hee points out that Suk Joon was treating him like a mutt and walks off.

On the roof, Suk Joon reasonably points out that Haeng Ah never said anything to him about how she was feeling, but she has no interest in rehashing the past, since neither one of them would have changed even if she had said anything. As if to illustrate her point, Suk Joon’s phone won’t stop going off. She asks him if he can not answer, but he does anyway, and Haeng Ah says a final farewell and walks away.

Haeng Ah, on the other hand, can’t seem to escape a persistent Suk Joon. She deletes his phone number, only to have him call again. On the way home, though, Haeng Ah ends up losing her phone in the taxi.

Meanwhile, Ji Hoon is so drunk at a street stall, that when a random person offers to be his driver, he agrees. On the way, during a police check, the driver takes off, leading the police to suspect that Ji Hoon had been driving. He tries calling Ri Hwan, but Ri Hwan doesn’t believe he’s really at a police station and hangs up.

Instead, Ri Hwan goes back to chatting with Yi Seul, who tries to ask him out for a meal, and fails. Back at the police station, Ji Hoon tries Haeng Ah next, and discovers that her phone has been turned in to the police. He calls Ri Hwan back, and tells him that Haeng Ah’s phone is at the police station, too. Ri Hwan decides to go pick it up (instead of bailing his friend out?), but Yi Seul insists on driving him there.

In the meantime, an unamused Tae Hee comes to the police station to pick up the drunken Ji Hoon. She gets him out, but has no time for his antics, especially when he announces to the police officer that they used to date. She’s happy to abandon him afterwards, but instead they argue, and it comes out that they broke up thanks to Ji Hoon’s habit of drinking at bars with women (and possibly sleeping with them). When he asks if she slept with her new boyfriend, Tae Hee slaps Ji Hoon, and tells him she never wants to see him again. 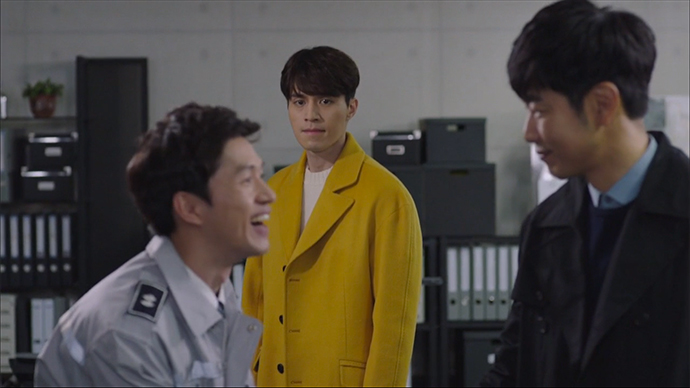 Yi Seul drops Ri Hwan off at the police station and drives away sadly. An oblivious Ri Hwan, however, goes inside, but has trouble explaining his relationship with Haeng Ah to the suspicious police officer. His confused explanation is interrupted by the arrival of Suk Joon, who easily gets Haeng Ah’s phone from the police officer, who turns out to be a fan. A fuming Ri Hwan chases Suk Joon into the parking lot to get the phone back, but Haeng Ah shows up before it gets heated. She tells Suk Joon to keep the phone, and announces that she’s dating Ri Hwan now.

As Haeng Ah and Ri Hwan walk away from Suk Joon, she asks the confused Ri Hwan to do something to prove that they’re dating, to put Suk Joon off. Ri Hwan holds her hand, but Suk Joon is not convinced. Finally, Ri Hwan asks if Haeng Ah really has no intention of getting back together with Suk Joon, and she impatiently confirms it. Ri Hwan tells her not to be surprised, and kisses her. 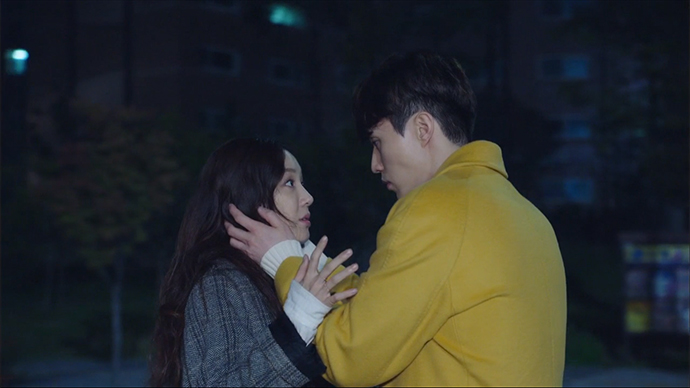 In the background, Yi Seul drives up. Both she and Suk Joon watch in surprise as Ri Hwan closes Haeng Ah’s eyes and kisses her again.

Okay, everyone has kissing on their minds, so let’s start with the kiss. Honestly, given what a confused relationship these two have, I’m not sure what Ri Hwan’s intentions are, nor what Haeng Ah’s eventual reaction to the kiss is going to be. It’s also hard to put aside the situation of Suk Joon taking persistence to the next level, but assuming we could, it was a pretty decent kiss. Here’s hoping the show can give us a less fraught version at some point.

Other than the kissing, this was a pretty sad episode. Suk Joon was persistent without actually being able to change, Yi Seul got emotional over a guy who was obviously just being nice to her, Sun Young has developed some medical issues, and our leads were pretty much running in circles.

The only part I actually laughed out loud was when Ri Hwan tried to compare Suk Joon to a bar, but even that was pretty sad, given that the joke depended on Ji Hoon being an epic drunk. Watching him with Tae Hee pretty much drained any amusement to be gained from Ji Hoon’s alcoholism.

On the upside, I’m still enjoying “Bubblegum”. Here’s hoping we get some more laughs next episode.