Skip to content
Side dish: For the month of November, I have been refraining from naughty foods, which include Taro Bread. But, it’s now a new month, so I can go buy this delicious baked good, or I can make it by following this recipe for Marble Taro Bread. I will probably go buy it.

It’s 1989, and little Haeng Ah runs into her bathroom and comes face-to-face with Ri Hwan for the first time. Ri Hwan is being bathed by Haeng Ah’s father, Joon Hyuk (Park Chul Min), and she does not hesitate to remark on how pasty he is. She asks Ri Hwan if he has a father, and when he says he does not, she offers hers. Ri Hwan rejects the offer as Joon Hyuk protests about being doubly rejected.

Ri Hwan will be visiting Haeng Ah’s home everyday, because his mother, Sun Young (Bae Jong Ok) must finish her residency at the hospital. Sun Young was the mutual acquaintance that brought Haeng Ah’s parents together.

Ri Hwan and Haeng Ah play together and even sleep together on the nights that Sun Young works late at the hospital. After the children argue over Ri Hwan spending time with another girl,  Joon Hyuk offers to give Haeng Ah the bracelet, which Ri Hwan took from his mother, on his behalf. 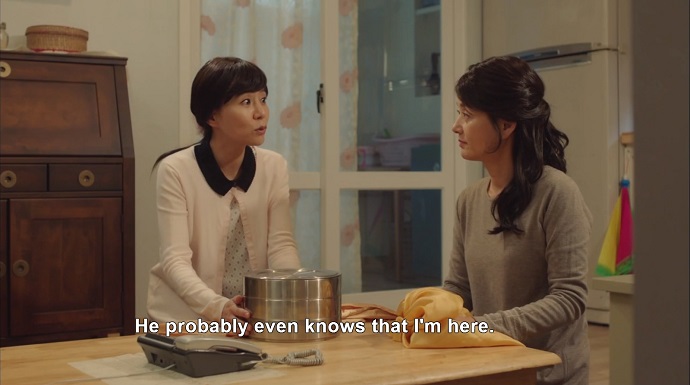 While Sun Young is searching fruitlessly for her bracelet, Aunt Gong Joo (Seo Jung Yeon) arrives with food, sent by her employer, Sun Young’s mother. Sun Young is called by Joon Hyuk to tend to the wounds of a friend who got into a knife fight. Aunt Gong Joo volunteers to change the bandages, and it would appear that this is how she meets her future husband, Uncle Gangster.

Ri Hwan and Haeng Ah are on a mission to find out where babies come from. Aunt Gong Joo attributes them to a sweet time between a couple, prompting the children to eat candy until they become ill. After a delivery man claims that it is the result of having drinks, Ri Hwan and Haeng Ah chug yogurt drinks. Sun Young’s medical explanation causes the children to walk away in confusion. Joon Hyuk tells them that they will know the answer once they reach a certain height, but the children are too impatient to wait for a growth spurt. A classmate explains sex with an illustration of two stick figures embracing each other. Ri Hwan and Haeng Ah puzzle over the drawing.

Fast forward to adolescence. Haeng Ah and Ri Hwan are teased by their classmates about being a couple after an announcement is made that Haeng Ah dedicated a song to Ri Hwan. Haeng Ah angrily goes on a hunt to find out who made the song request in her name.

Haeng Ah comes across Ri Hwan reading a letter. She grabs it and discovers that it is a declaration of love from another student. Haeng Ah is amused until she finds herself referred to as the ugly girl who hangs out with Ri Hwan. She angrily throws the letter back at him.

Later, a chain mail is sent to the infatuated girl in Ri Hwan’s name, which gets him a slap in the face. Ri Hwan goes straight to Haeng Ah and accuses her of writing the chain letter. They bicker over the various wrongs that they have done to each other.

Sun Young is having lunch with Joon Hyuk, and she clearly wants to be more than old friends. Before Haeng Ah’s father can confirm whether he and Sun Young have a future together, Ri Hwan and Haeng Ah come running in arguing.

At the hospital, Sun Young receives a message from Joon Hyuk on her pager, and runs out to the front to meet him. When he finds out that she has only 30 minutes for lunch, he rushes through a date scenario. Joon Hyuk takes Sun Young on a ride in a wheelchair. Then, he takes her for a lunch of taiyaki, before pretending to be unable to pay so that he and Sun Young can experience the illicit thrill of running away. While having coffee from a machine, Joon Hyuk accidentally spills it onto Sun Young’s polka dot dress. Finally, they go to a photo studio, where Joon Hyuk points out that he is too poor for Sun Young. However, if she can wait a year, he will be more financially stable. Sun Young eagerly agrees to wait. They are ecstatic as the photographer takes their portrait. Joon Hyuk delivers Sun Young back to work on time, as promised. He stops her before she leaves to shake hands as they grin at each other.

When Joon Hyuk dies unexpectedly, Sun Young is devastated at having lost her love a second time. She and Haeng Ah watch helplessly as the medical crew fail to revive him.

At school, Haeng Ah empties her locker, while an alarmed Ri Hwan asks where she is going. Haeng Ah is leaving tomorrow to live with her aunt in the country. Ri Hwan bursts into Sun Young’s office to ask why Haeng Ah can’t live with them. Ri Hwan insists that he had promised Joon Hyuk that he would take care of Haeng Ah. Sun Young, bitter about Joon Hyuk’s premature death, insists that Haeng Ah will survive a broken promise.

Ri Hwan turns to Aunt Gong Joo for help in keeping Haeng Ah. Aunt Gong Joo admits that she does not want Haeng Ah to leave either. Regardless of their wishes, the next day, Ri Hwan and Aunt Gong Joo see Haeng Ah off at the bus terminal. Haeng Ah puts on a brave face while Ri Hwan can barely acknowledge her as the bus pulls away. At the last minute, Ri Hwan chases after the bus, but too late for Haeng Ah to see him.

Sun Young is resorting to sleeping pills to cope. Her colleague reluctantly prescribes more for her, because he fears that she might succumb to her grief. He tells her to take time off. and she rages about how she cannot stay at home, because everything in her house reminds her of Joon Hyuk.

Remembering his promise to Haeng Ah’s father to look after her, Ri Hwan makes the trek to her aunt’s rural home. She is surprised to see him, and amazed that he came all this way to give her a portable cassette player with his mix tape inside. Ri Hwan has to leave right away to catch the bus home, and Haeng Ah is despondent, but resigned. After realizing that he forgot to give her headphones, Ri Hwan runs back, and discovers that Haeng Ah has been crying non-stop since her move.

A determined Ri Hwan ends up arranging for Haeng Ah to return to his home. Haeng Ah’s uncle strikes a deal with Sun Young that if she would provide the room, he will pay for Haeng Ah’s board. Sun Young looks horrified, and Haeng Ah appears shamefaced. The only one who looks thrilled with the arrangement is Ri Hwan. 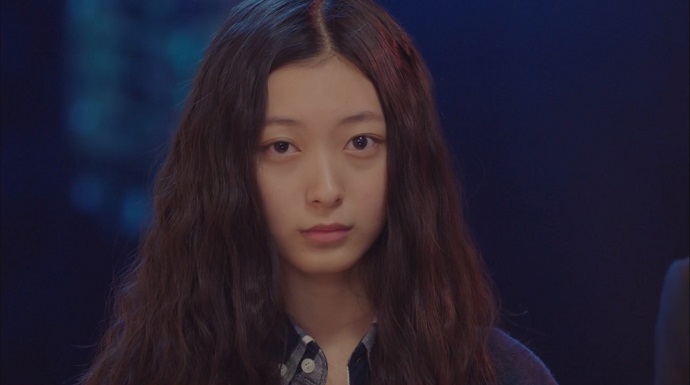 Late at night, Ri Hwan comes to Haeng Ah’s room looking like he has something to say. Instead, he brings her up to speed on school gossip. Haeng Ah guesses correctly that Sun Young does not know that Ri Hwan came to visit her in the country, and she is fearful of Sun Young’s anger.

Meanwhile, Sun Young tosses and turns in her bed. She goes to Haeng Ah’s bedroom and when she finds Ri Hwan asleep with her, she becomes overwrought. Shortly thereafter, Haeng Ah overhears Sun Young on the phone, saying that she would kick Haeng Ah out if the girl ever became involved with her son; Ri Hwan witnesses everything. Thereafter, Haeng Ah makes a habit of staying out late, and Ri Hwan doggedly finds her in order to bring her home.

The next day, when Ri Hwan and Haeng Ah’s class is bound for a field trip, Ri Hwan is taken off the bus just prior to departure, and brought to the hospital where he learns that Sun Young has attempted suicide. This is when Haeng Ah develops her phobia of hospitals, which she hides from Sun Young. Ri Hwan withdraws from school activities out of fear that his mother will make another attempt on her life. Both Ri Hwan and Haeng Ah find solace in advice from a radio program.

On the one year anniversary of Joon Hyuk’s death, Haeng Ah and Sun Young are supposed to meet up. Haeng Ah spots Sun Young, and eagerly steps out onto the street, in front of a moving car. The car stops just in time, and Sun Young lashes out at the driver for being inattentive then at Haeng Ah for being so happy to see her. Haeng Ah is overjoyed that Sun Young shows concern for her, but Sun Young appears troubled.

Haeng Ah and Sun Young arrive at the late Joon Hyuk’s restaurant for the memorial celebration. Sun Young sits down at a table and the story fast forwards to the present in which Sun Young contemplates how as her memories fade, things become more clear. Aunt Gong Joo’s teenage daughter, Dong Hwa (Ko Bo Gyeol) cares enough to bring Sun Young a glass of tomato juice that she blended by hand, but she is impatient with Sun Young when she forgets her name again. Dong Hwa confesses to Sun Young that she thought of her as Cinderella’s stepmother, but now, in her current state, she finds Sun Young more attractive. Sun Young is guileless as she beams at Dong Hwa’s compliment.

After the waterworks of episodes 9 and 10, it was nice to step away from the main story for some epic cuteness, even if episode 11 felt very choppy. The child actors who played Haeng Ah and Ri Hwan as children were hilarious, and the ones who played them as adolescents were fantastic in both the lighthearted and more somber moments.

Unfortunately, I have to disagree with Dong Hwa regarding Sun Young; she still comes across as Cinderella’s stepmother. Now that we have seen her one day of perfect happiness with Joon Hyuk, and the devastation of losing him on the cusp of finally achieving her dream both professionally and personally, I am sorry to say that Sun Young still comes across as selfish and cruel. She was ready to abandon the daughter of the man she supposedly loved, and disregard her son’s sense of obligation to Joon Hyuk, all because of her disappointment and grief at losing Joon Hyuk prematurely.

Since the writers have failed to make Sun Young and her reasons for keeping Ri Hwan and Haeng Ah apart sympathetic, I hope they will not continue to use her to provoke unnecessary heartache and angst in the remaining five episodes.