Skip to content
Side dish: Did you know you can have fried chicken without bones in it? Here’s a recipe for boneless fried chicken thighs from Michael Ruhlman. Delicious, and not fatal!

Suddenly, we’re watching Breakfast at Tiffany’s as Mi Mo (Jang Na Ra) eats a croissant outside of a jewelry store in full Audrey Hepburn drag. When a guy comes along to sell her knockoffs, she shoos him away, but not before he points out that her ring is a total fake, too.

When Mi Mo looks down at her ring, she’s horrified, and back in reality. Mi Mo recalls the day before, when she and her neighbour, reporter Soo Hyuk (Jung Kyung Ho), were at city hall, registering their marriage. Soo Hyuk’s friend, Hae Joon (Kwon Yool), shows up to be the witness, and the inebriated couple celebrate while Hae Joon looks on, nonplussed.

When Hae Joon leaves them to go get the car, Soo Hyuk and Mi Mo run into the market, where they proceed to buy rings, then lingerie, then animal-themed onesies. Appalled by their memories, both Soo Hyuk and Mi Mo beat themselves up in their respective apartments. When they try to get in touch with each other, they both realize that they don’t have each other’s contact information.

Desperate, Mi Mo calls a hotline for help on annulling her marriage, only to discover that she’ll have to get divorced (what hotline is this??!!?). What follows is a comedy of errors as the two of them run around frantically, narrowly missing each other, until they finally meet in front of Mi Mo’s apartment. Back inside, the two of them fling accusations at each other until Soo Hyuk notices that Mi Mo is dressed in a cow onesie, and suddenly wonders if they had sex. Neither of them remember, but Mi Mo dismisses the idea since cow onesies are not her thing. Soo Hyuk flips out, because cow onesies are definitely his thing (OMG), but they finally establish that nothing happened, and move on to the more pressing matter of how to get out of their marriage. 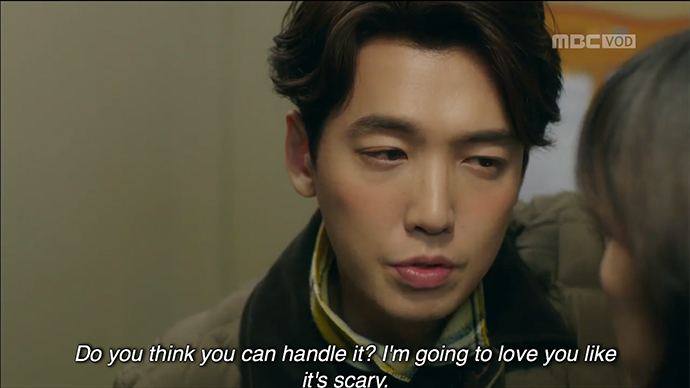 Soo Hyuk rejects Mi Mo’s suggestion that they pretend he’s a deviant to get an annulment, and they end up back at city hall, confronting the same clerk who allowed them to register in the first place. After taking them through their obnoxious behaviour of the day before, the clerk informs them that he and Hae Joon convinced the couple to return the next day to register the marriage, and so, they’re not married. 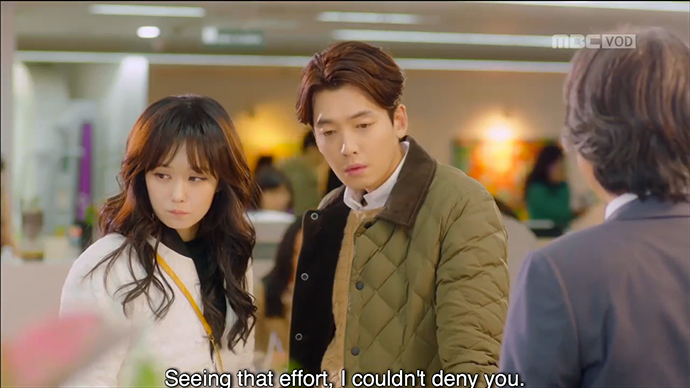 Hae Joon, meanwhile, is at the hospital where he works as a superstar doctor, and gets love notes from teenage patients. The nurses and his female colleague, Yeon Soo (Hwang Sun Hee), quiz him about his ideal type, and he tells them that he’s looking for someone who’s been through a lot, but is still innocent.

Mi Mo and Soo Hyuk have an awkward goodbye over coffee, as they both swear never to speak of this incident again. As they part, Mi Mo thinks back to her divorce, where they parted in the same café. In her memories, Mi Mo recalls that the little differences between her and her husband added up until their feelings towards each other changed.

Back home, Mi Mo gets a call from her colleague and friend, Da Jung (Yoo Da In), who reminds her that today is the wedding date of the best couple she ever matched up. Meanwhile, Soo Hyuk goes to meet the handsy teacher of his son, Min Woo, who attempts to convince him that he should send Min Woo to an international school, despite Min Woo’s objections. Soo Hyuk rejects both her and the idea. 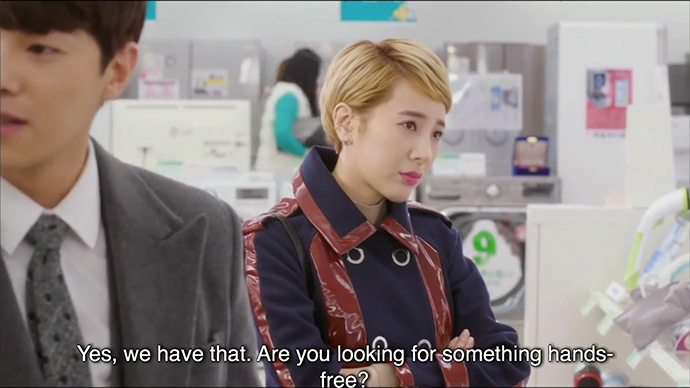 Mi Mo’s friend, Ae Ran (Seo In Young) looks bored while shopping for household items with her fiancé. When she asks him if he’s nervous about marriage, he mistakenly reassures her that he won’t run away.

After an awkward run-in with Soo Hyuk at the elevator, Mi Mo runs into a neighbour, who advises her to take better care of herself as she ages, so that she can maintain an apple butt. Mi Mo’s other friend, Dong Mi (Yoo In Na) is at school, complaining to a fellow teacher about how badly her meeting with accountants looking for love went. She starts writing an angry email to the company that arranged it.

At her client’s wedding, Mi Mo spots her ex-husband from across the room, but before she can say hello, he’s joined by his hot fiancée. Stricken, Mi Mo runs off into a corner. Later, with her friends, Mi Mo complains that she was swindled in her divorce, since he replaced her with a younger, hotter model. Da Jung is more concerned with her own impending divorce, and points out that it’s been five years since Mi Mo’s divorce, so it shouldn’t come as a surprise that her ex would move on. Dong Mi is more concerned about her own virginal state, while Ae Ran is thinking of dumping her fiancé. 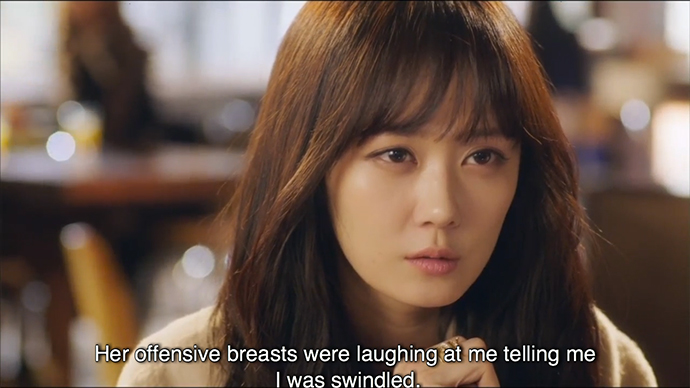 Back at the office, Mi Mo takes the head off a client whose main objective is a find a woman with large breasts. Annoyed, Da Jung, tells Mi Mo to get in touch with Seong Jae (Kim Sa Kwon), her ex-husband to find out if that was the basis of her own divorce, so she can get over her grudge (WTF?). This leads to an awkward meeting with Seong Jae, who tells her that he was unhappy with her, because she didn’t seem to need him. Mi Mo doesn’t buy it, and it predictably descends into an argument. In the end, Mi Mo takes away Bbo Bbo, the dog that Seong Jae is giving up for adoption thanks to his fiancée’s allergies.

Outside, in the middle of a storm, Ae Ran breaks things off with her fiancé, who is predictably angry that she’s realizing her true feelings so late in the day.

Back at home, Mi Mo discovers that her neighbour with the apple butt died from choking on a chicken bone. Mi Mo is convinced she would have lived if she hadn’t been alone. She imagines a future where the same happens to her, and Seong Jae and his fiancée take over her apartment.

That night, Dong Mi watches The Notebook by herself, Da Jung sleeps in a separate bedroom from her husband, and Ae Ran drinks while thinking of her breakup. Mi Mo, meanwhile, takes a bath and worries about dying alone. 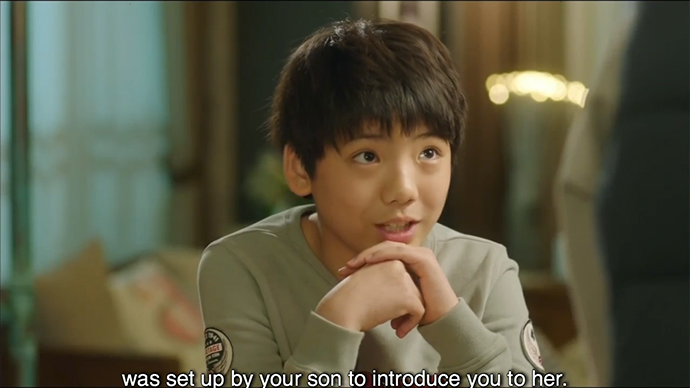 The next morning, Soo Hyuk discovers that Min Woo does want to go to an international school, but had rejected the idea so that he could set up Soo Hyuk with his teacher. Min Woo is concerned that Soo Hyuk will become an obsessed parent if he doesn’t date. Soo Hyuk tells him he hasn’t met the right woman yet. Later, Soo Hyuk goes through his elementary school photo album and thinks back to his drunken times with Mi Mo.

Mi Mo, meanwhile, wakes up dizzy and falls out of her bed. Thankfully, she’s wearing nice lingerie when she calls for an ambulance. In the emergency room, her doctor turns out to be Hae Joon, and he quickly diagnoses a particle in her inner ear, then gives her his lab coat to wear. A halo surrounds him as he fixes the problem and tells her she’s going to be okay. 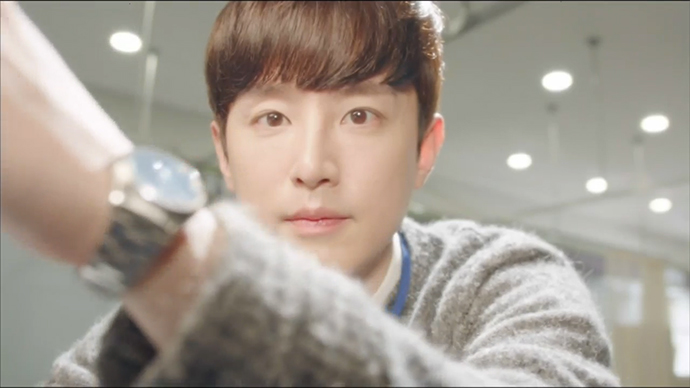 Hae Joon ends off by calling Soo Hyuk and telling him to pick up his wife. As Mi Mo sits in the emergency room and wonders why she has no one to sit with her, Hae Joon gets the third degree from Yeon Soo about why he gave Mi Mo his lab coat. He lets her win the argument, then goes to sit with Mi Mo. Mi Mo stares at him like a crazy person, then asks him if she would be crazy to fall for him. Confused, Hae Joon stares back at her, and Mi Mo mentally resolves to marry Hae Joon.

In a two-day span, Mi Mo has gone from being dumped, to maybe being married, back to single, to confronting her ex for no apparent reason, to instantly falling in love with a hot doctor. This was all pretty entertaining, until Mi Mo’s desire to remarry crossed the line into a desperate desire not to die alone. Just in case you’re buying what this show is selling you, being single is not actually fatal, and if you do die in a freak fried chicken accident, your ex-husband and his fiancé are not likely to laugh at you for it (unless they’re total assholes, in which case, I’m sorry).

I’m going to vent a little here, so let me qualify this by saying that I didn’t hate this episode, but there were a few things that annoyed me. First, who in their right mind would tell their friend to go meet up with their ex to find out why they got dumped five years later? Second, who in their right mind would follow this advice? Third, do people actually get divorced because of bra size? Fourth, do I need flashbacks to things I just saw? Can I not figure out on my own why someone might be drinking right after breaking up with their fiancé?

Hopefully, “One More Happy Ending” will go back to wackiness in the next episode, and leave the desperation behind. Because when Jung Kyung Ho and Jang Na Ra are in full flow, it’s pretty entertaining. More of that, please!