After stuffing your face with delicious Kyouka Ramen, the obvious next step is to take a long streetcar ride to go eat something sweet. This is how we ended up at Roselle Desserts, taking advantage of their late opening times to sample a small array of tasty treats. First up was the millefeuille, which they assemble on the spot to ensure that the pastry doesn’t get soggy from the cream. This beautiful dessert was tasty, and I liked how the texture of the pastry shattering in my mouth contrasted with the rich cream. 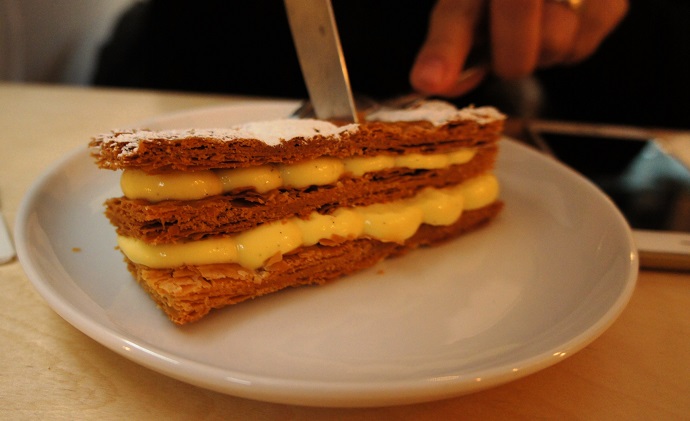 As good as that was, the winner of the night was the Loco Coco, which I still can’t figure out why I ordered since I’m not a fan of coconut. It felt light, but flavourful, and the coconut was a nice accent to the mango and passionfruit. Both the flavours and the sweetness were well-balanced.

By contrast, the turtle tart felt like overkill, tasty but excessively sweet and sticky. To qualify, this perception may have had something to do with the fact that it was the last one that I ate. Regardless, I probably wouldn’t try it again. Instead, I would probably check out some of the other items in their ever-changing line-up, like the éclairs (banana cream when we went), or the cream puffs, or the soft serve, or the tiny Earl Grey shortbread cookies, or the caramels, or even the crêpe cake.