Skip to content
Side dish: Since Hae Young likes it so much, who are we to argue? Here’s a recipe for Omurice from Aeri’s Kitchen. It’s almost Valentine’s Day, so remember to draw a heart with the ketchup. 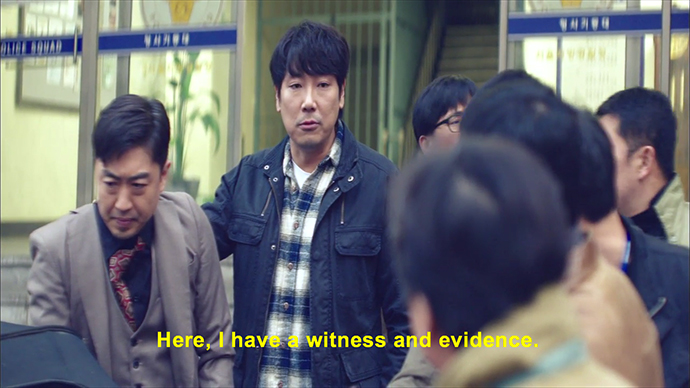 In 1995, Detective Lee Jae Han (Jo Jin Woong) figures out that dilettante rich kid criminal, Han Se Kyu has hidden the goods stolen from his friends’ parents’ houses in the back of his car. When his probing leads the driver to get rid of the car, Jae Han arrests the driver and recover the stolen goods. Consequently, Se Kyu is arrested, and the falsely imprisoned Oh Kyung Tae is released. 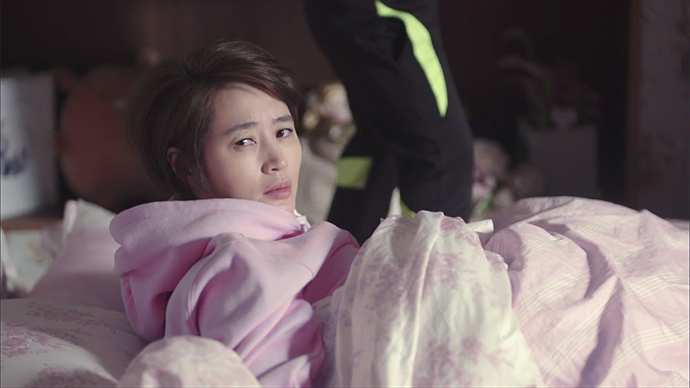 In 2015, profiler Park Hae Young (Lee Je Hoon) wakes up to find that the present has changed, and his team leader, Cha Soo Hyun (Kim Hye Soo) is not dead, but home from work with a cold. When he visits her, her mother takes the excuse to find out how old he is (presumably to see if he’d date Soo Hyun), while Soo Hyun takes the excuse to escape from her mother’s house to the closest sauna. Back in the office, Hae Young discovers that Se Kyu was sentenced to six months in jail, and two years’ probation. Meanwhile, back in 1995, Kyung Tae kills the man he blamed for the death of his daughter on the Hanyoung Bridge (see episode 6 for details). In 2015, Hae Young visits the grave of Oh Kyung Tae, who died in prison in 2005.

The final consequence of Hae Young and Jae Han resetting the past turns out to be that the chief of Jae Han’s department is reassigned, and replaced by Kim Bum Joo (Jang Hyun Sung), an antagonistic and corrupt cop. Before he goes, Jae Han’s old chief passes on the information that all of Se Kyu’s robbery victims were part of a bribery scheme and that some evidence on the Hanyoung Bridge collapse was among the stolen items. After going through the stolen items, Jae Han realizes that a blue diamond necklace is missing. Meanwhile, when a terrified Se Kyu gets out on an early release, Jae Han goes to confront the congressman who arranged for it, to no result.

In 2015, Hae Young muses to Soo Hyun that using a transmitter to the past can only lead to problems. That night, as Jae Han tries to catch him up on the secret behind the missing necklace, Hae Young tells him that he won’t be contacting him again. Hae Young shreds the information he has on Jae Han, and throws the radio out. 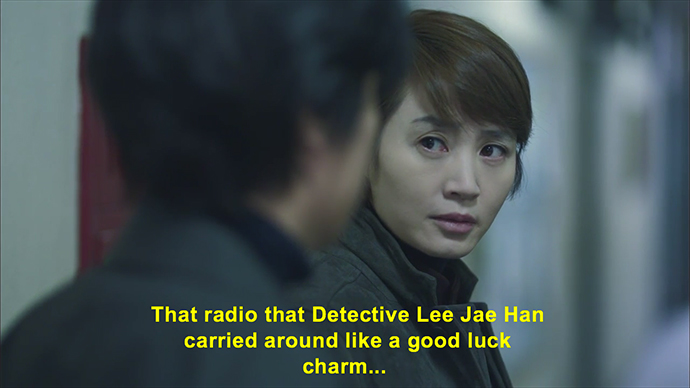 As he leaves, he’s spotted by police chief (and former colleague of Jae Han), Ahn Chi Soo (Jung Hae Kyun), who finds the discarded radio in the garbage, and recognizes it as Jae Han’s. The next morning, Chi Soo brings this information to Soo Hyun, who flashes back to the past when she was a rookie and Jae Han was stuck with teaching her to drive. She tried to make up for how terrible she was at it by giving him coffee. When she dropped the coffee off at his desk, Soo Hyun noticed the radio and stuck a happy face sticker on it. Back in the present, Chi Soo adds that Hae Young was taking an unusual interest in Jae Han, despite the unlikelihood of their ever having met.

When Soo Hyun gets to the office, she interrupts a conversation about what to eat (Hae Young admits to liking omurice), but before she can confront Hae Young, they get a visit. The visitor turns out to be a man whom Soo Hyun met in the past with Jae Han, and she remembers her suspicions when Hae Young recognizes Jae Han’s name, but Hae Young puts her off by explaining that he has a colleague with the same name. The visitor, meanwhile, is there to ask them to re-investigate the death of his girlfriend, Shin Da Hye, an aspiring actress who committed suicide in Mikang Lake 20 years ago. The cold case team are skeptical, but the man produces a picture of Da Hye from 20 years ago, and another from a few days ago in the same café. The man begs them to find Da Hye.

Back in 1995, Jae Han is hot on the trail of the blue diamond necklace. The owner of a jewellery store informs him that a young woman (Da Hye) tried to sell the necklace to him a few days ago, and shows Jae Han the CCTV footage of the failed transaction. The woman was very nervous and had no idea of the value of the necklace. Jae Han notices that a floppy disk was found inside the necklace box, which the woman took with her. He asks the jewellery story owner if the woman left her contact information, and the owner passes on the name and number she left behind, both of which are fake. 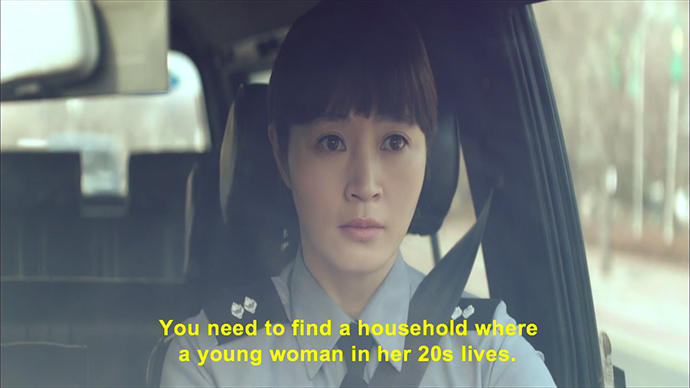 When Jae Han notices that one of Bum Joo’s goons is following him, he asks the jewellery store owner to erase his CCTV footage, and rips the page with contact information out of the owner’s logbook. Back at the police station, unable to do any investigating under the watchful eye of Bum Joo, Jae Han takes the rookie, Soo Hyun for driving practice. In the van, Jae Han assigns her the task of calling up all 100 variations of the phone number of the young woman with the last two numbers changed, and finding out if anyone who fits her description lives there. Soo Hyun completes this task in the women’s night duty room, away from Bum Joo’s glare.

When she gives the results to Jae Han, he invites her along to visit the homes. In fact, Soo Hyun and Jae Han end up walking in to Da Hye’s funeral when they go to her house, and this is the occasion where the man who asks Soo Hyun to find Da Hye in 2015 meets Soo Hyun and Jae Han.

In 2015, most of the cold case team is against taking the case, believing it to be hopeless. But when the conversation turns to Hae Young, he’s more interested to find out how Soo Hyun knows Jae Han. Soo Hyun turns the question back at him, wondering why he’s interested in her senior colleague. Instead of answering, Hae Young asks why they were at Da Hye’s funeral. Finally an answer comes in this chain of questions as Soo Hyun tells him that they were probably investigating the missing blue diamond necklace. Hae Young asks if it was after the arrest of Se Kyu, and when Soo Hyun confirms that it was, he votes to take the case. It comes to a stalemate between the four members of the team, until the rookie, Eui Kyung casts his deciding vote.

Soo Hyun meanwhile interviews Da Hye’s sister, who confirms that she identified the body by the fact that the general details matched Da Hye’s description. When Soo Hyun asks to see Da Hye’s belongings, the sister refuses, since they burned everything long ago. Back at the office, Hae Young points out to Soo Hyun that Da Hye had no connection to the location, and no reason to spontaneously commit suicide there.

Back in 1995, Jae Han goes to Se Kyu’s house by Mikang Lake, and asks the groundskeeper if he recognized Da Hye. The groundskeeper tells him how Se Kyu played around with her, and partied at the house with his friends. He goes on to tell Jae Han about Da Hye returning once by herself to the lake house. Jae Han realizes that this is when Da Hye stole the blue diamond necklace from Se Kyu’s car.

In 2015, at the café where the man spotted Da Hye again, Soo Hyun notices a book on the café’s bookshelf that matches the one 2015 Da Hye was holding in her hands in the photo. The fingerprints on the book are a match for a woman who looks exactly like Da Hye.

The consequences for messing with the past seem endless, and it’s easy to see why Hae Young would give up on the idea of being able to make a difference. Trading off the life of the man who saved his own daughter at the Hanyoung Bridge collapse and the life of Oh Kyung Tae for Soo Hyun’s is pretty awful, especially when you take into account that Soo Hyun’s death was the consequence of Hae Young’s meddling in the first place. Given the mess that he’s left behind, it’s hard to justify using the radio, but, given that we have 9 episodes left, I have the feeling that the radio is going to make it back into Hae Young’s hands sooner rather than later. Maybe this time, Soo Hyun will be in on the secret, too, though I’m curious how she’ll react to having a line to the Jae Han of the past, a Jae Han who doesn’t know her.

I love how this case builds on the last one, though the coincidence of the photographer showing up when he did was a bit much for me, and I think we could have gotten there without him to fill in the gap left by Hae Young’s discarded radio. Regardless, I did like how Han Se Kyu’s case went from Jae Han’s single-minded quest for justice for his friend to opening up a can of worms that may or may not expose something bigger.

But, enough lame analysis, and on to baseless speculation! Given that we’re talking about bribes for construction in a Seoul suburb, I’m wondering if we’re heading towards the Sampoong Building collapse, or the fictionalized equivalent. This show has already dealt with some heavy stuff, so I can’t imagine they’d shy away now, though this is obviously just guessing on my part. My only concern is how our characters are going to deal with a tragedy on that scale. Maybe we’ll find out soon?