If you’re not in the mood for the full marathon of a sit-down Lebanese dinner, then a quick stop at a small shop can be just as good. You can try, for example, the ubiquitous lahm bi ajeen, which looks like a thin, meaty pizza. The one pictured above is from Bakery Movses in Bourj Hammoud, just over the river from Beirut. Directions are kind of difficult, but if you find yourself in Bourj Hammoud, just ask someone where it is.

Another option is Ichkhanian Bakery in Beirut. I tried their Pomegranate Lahmadjun, which was pretty tasty. Ichkhanian has a pretty Instagram account, but their branch in Beirut is very old school, comprising the oven area, a fridge at the front for prepared foods, and a super nice lady at a cash register. You can watch your order coming out of the oven, and if they’re late with it, you may get a piping hot freebie. It’s not too far from the Robert Mouawad Museum, so you can see some random antiquities and a replica of a bejewelled bra in lieu of dessert. 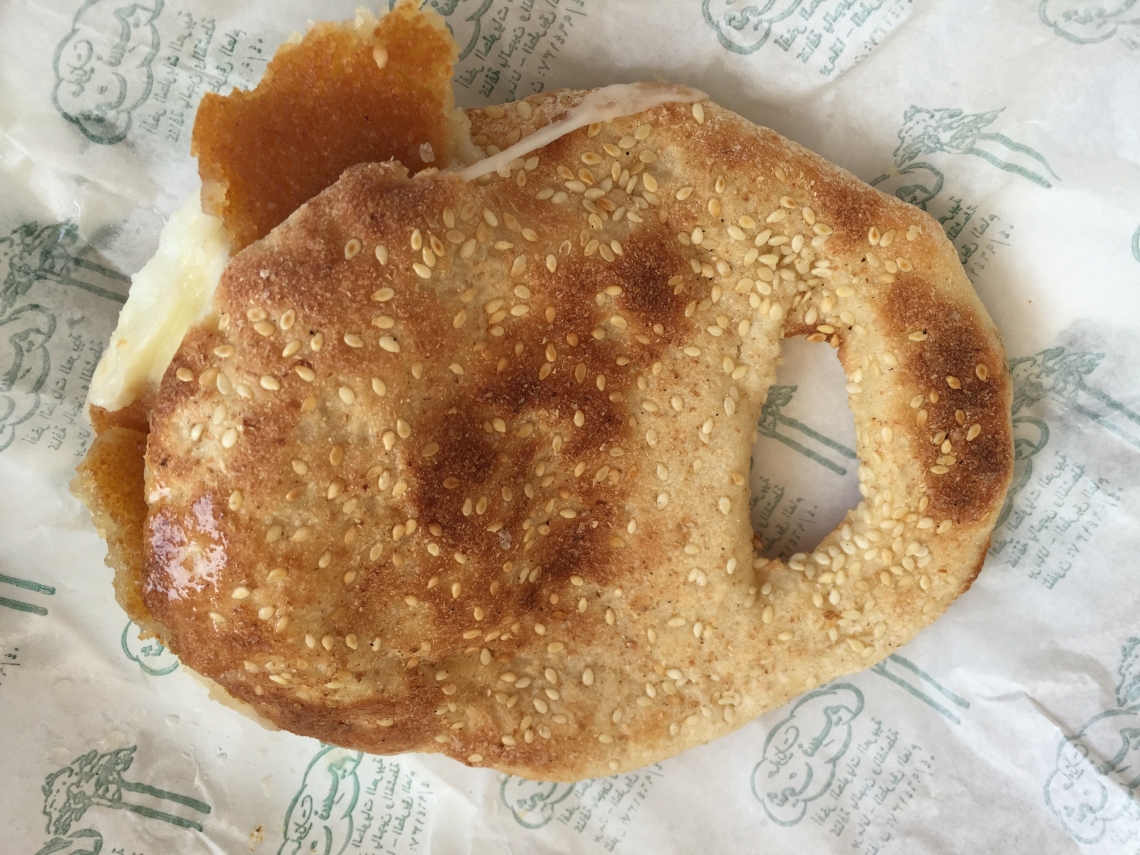 If you’re ever invited to the home of a Lebanese host, remember to show up hungry. I made the mistake of having a snack for breakfast, and then found myself confronted with fresh kunafa bil jibn, served inside kaak bread. Don’t get me wrong; I finished it, but it took a long time before I got hungry for lunch. This one was from Chez Nassim in Broumanna, which is also known for its ice cream. 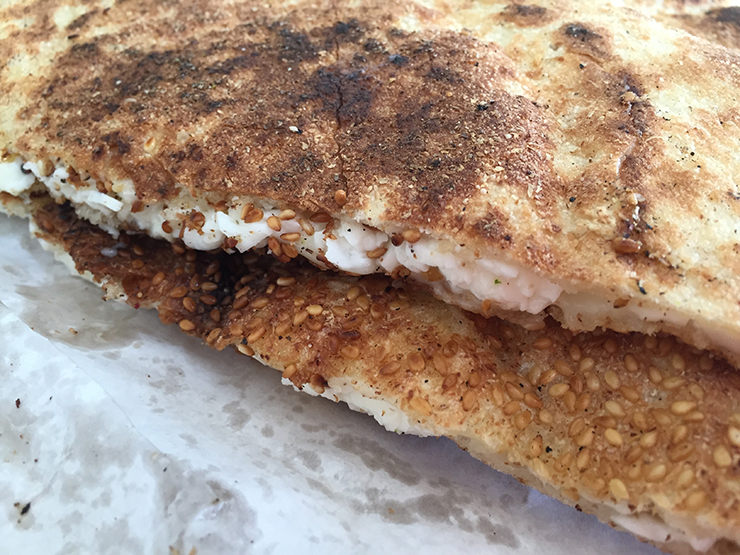 We stopped for this meal on the road to see the Beit ed-Dine Palace. I’m pretty sure we were still in Beirut, but I have no idea where, nor what the place was called. They bake the kaak (the bread) on the spot, then fill it with cheese and stick it back in the oven. You can pack it up to go, or do what most people were doing, which is eat it fresh at one of the standing tables outside, while enjoying the view of the highway. Suffice it to say, it was super-delicious.

This kebab sandwich from Restaurant Apo was one of my last meals in Beirut, and I was so hungry that I only remembered to take a picture once the sandwich was mostly done. My significant other has sworn never to eat kebab outside of the Middle East again, because nothing else will compare. 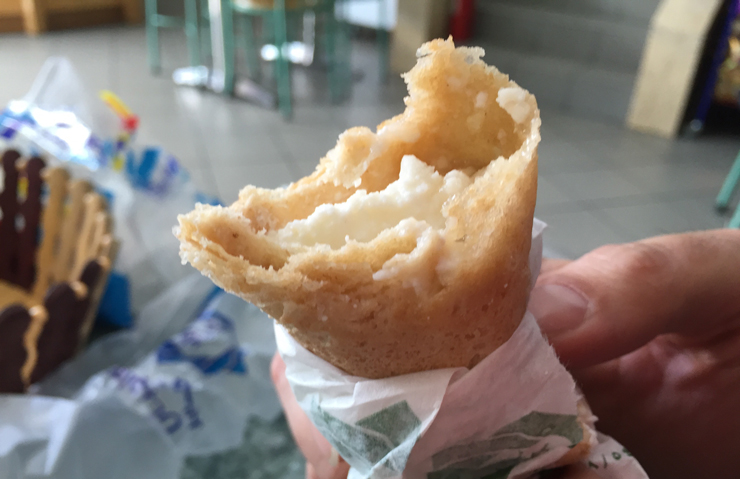 I have no idea what this sandwich was called, but it consists of super fresh labneh (pressed yogurt) with honey on markook (saj bread). You can also get the savoury version with olives and cucumbers. It’s from Jaber Jaber Sons, a dairy shop, and we may or may not have been near Zahle, on the road to Baalbek. In case this is too far for you, there are two other branches. 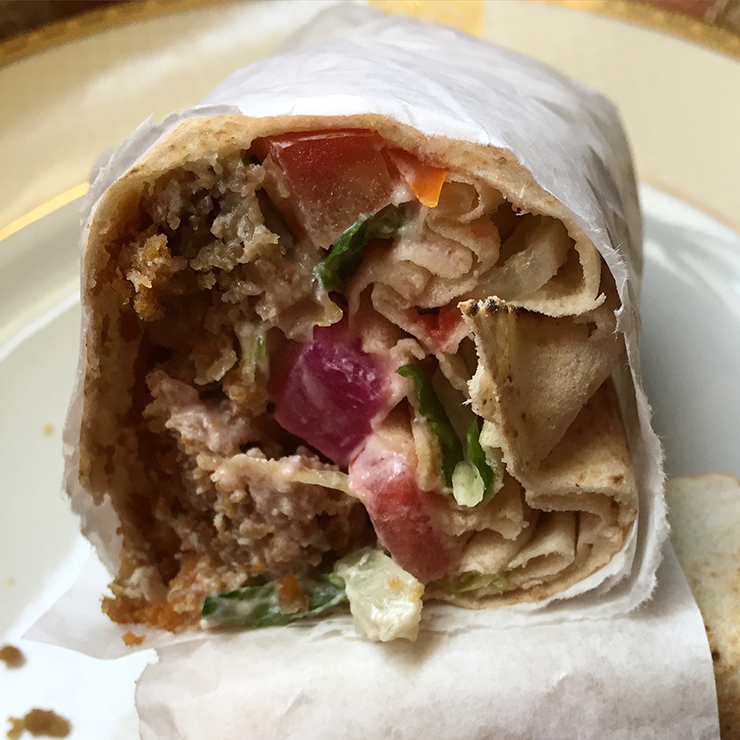 Falafel Arax is another institution in Beirut, but has branches in Jordan, Los Angeles and Montreal. I have no idea how good the falafel is anywhere else, but the Beirut version is pretty tasty. 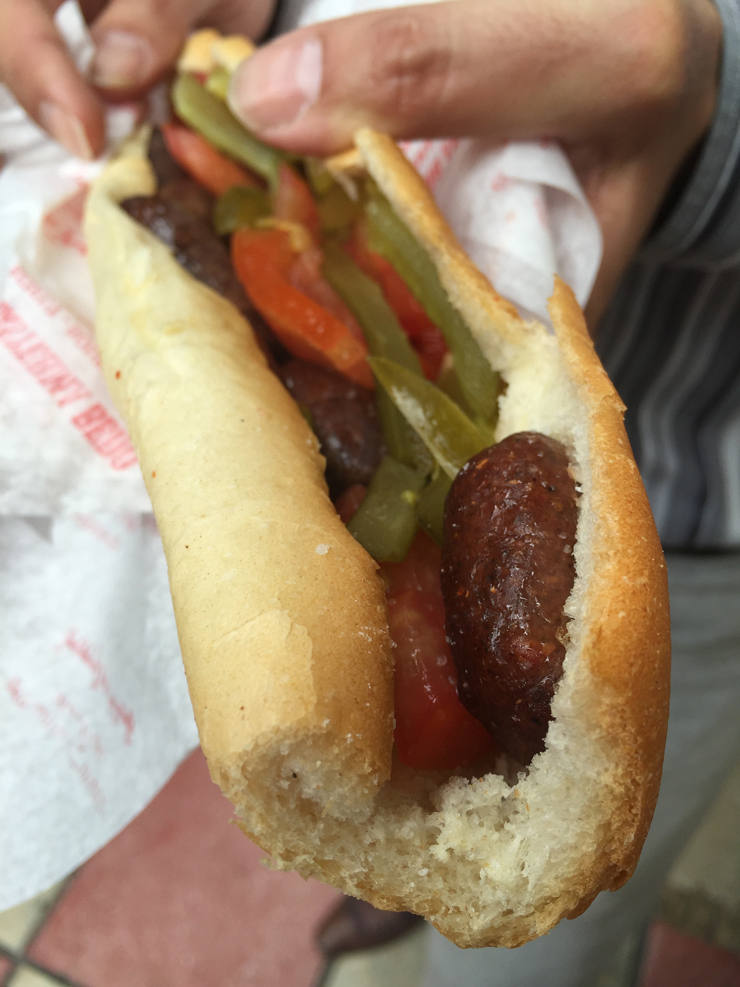 Basterma Mano’s main competitor is Basterma Bedo. Against the advice of our host, my significant other decided to try it, and ended up with a makanek (sausage) sandwich that he didn’t enjoy. My shawarma was decent, but frankly, Basterma Mano was better. They’re close to each other, if you feel the urge to compare the two.