Skip to content
Side dish: Today’s the first day of summer in Canada, and the heat usually has me craving salad. Epicurious offers a recipe for Kale Salad with dates, parmesan and almonds. Try it during a heat wave. 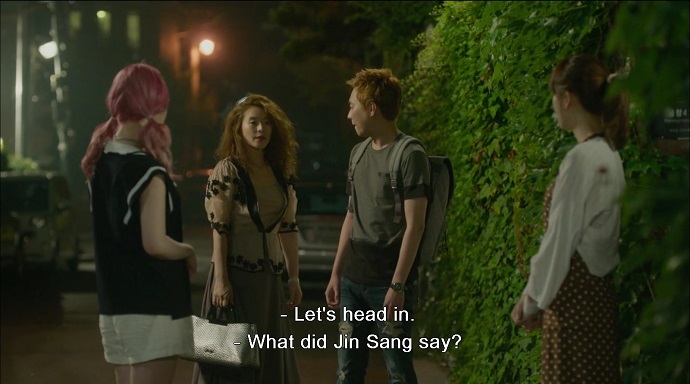 Hae Young (Seo Hyun Jin) is waiting outside for her boyfriend, Do Kyung (Eric Mun) to come home. As she is waiting, she witnesses Do Kyung’s stepbrother, Hoon (Heo Jeong Min) and his girlfriend, An Na (Heo Young Ji) reunite. An Na uses her witch craft to determine that Hoon has not cheated on her. The happy couple finally notice Hae Young and note that she looks like a newlywed wife waiting for her husband. Still, they are unsettled to learn that she actually cooked soup for Do Kyung.

Do Kyung’s sister, Soo Kyung (Ye Ji Won) arrives on the scene, seemingly drunk. Hoon begins to reprimand her for drinking while pregnant, but it turns out that she’s simply pretending out of boredom. When Hoon asks about the father of her baby, Jin Sang (Kim Ji Seok), Soo Kyung returns to her drunk act rather than respond.

It turns out that Jin Sang is hiding in the bushes nearby, and only Hae Young sees him emerge. He wrestles over whether to enter the house, and Hae Young guesses that he has done something terribly wrong. Jin Sang finally loses his nerve, and runs away.

When Do Kyung returns home, he and Hae Young listen to recordings that his father made of him and Soo Kyung singing as children. He reveals to Hae Young that his father died while recording in the field with him. In retrospect, Do Kyung is glad that he was there for his father during his death, because dying with someone you love present is the best possible way to meet the end.

This reminds Do Kyung of the consultation he and his psychiatrist did with another medical expert about Do Kyung’s visions. However, the medical expert has nothing to add, claiming that Do Kyung knows which path to take; he just needs the courage to take it.

Meanwhile, Jin Sang is having nightmares of life with Soo Kyung as a wife when Hoon bursts into his bedroom. Hoon gives him leeway to abandon his sister, but when Jin Sang calls him a delinquent, the situation devolves into a brawl. Soo Kyung interrupts with her baseball bat at the ready, and instructs Jin Sang to teach Hoon some respect. A frustrated Jin Sang drills Hoon’s butt with the baseball bat.

Once they are alone, Soo Kyung announces that she will move to another country and Jin Sang can carry on as he always has. When Jin Sang refuses to give up on his baby, Soo Kyung asks if he could ever kiss her, and he shies away. She gives him 24 hours to decide whether he could ever be romantically involved with her, then leaves him.

After Do Kyung and his team finish recording the delicious sounds of food production, they end up at a restaurant where Do Kyung and his ex-fiancée, pretty Hae Young (Jeon Hye Bin) had visited previously. When he looks up the portrait they took at the restaurant, he discovers that pretty Hae Young has already ripped out her portion of their photo from the album, and recently left a note thanking him for his love. Do Kyung takes the remaining half of the photo with him.

Pretty Hae Young is on a blind date with a man who is simply grateful that she showed up. A thank you text from Do Kyung gives her pause, but she quickly recovers, and turns off her phone.

Plain Hae Young freely admits to her aunt and cousin to dating the man who ruined her wedding. In fact, she plans to bring Do Kyung to her cousin’s wedding. Hae Young’s mother, Duk Yi (Kim Mi Kyung) learns of this through the aunt and bursts into Hae Young’s bedroom, demanding to know why she wants to air her dirty laundry. However, Hae Young is determined to show Do Kyung off.

Do Kyung is riding in a minivan with his team when he experiences a car accident. It turns out to be an illusion. and instead, he remembers that the accident that will supposedly kill him takes place with him outside of a car. Meanwhile, Hae Young’s ex-fiancé, Tae Jin (Lee Jae Yoon) is stumbling drunk over a bridge, contemplating how to take his revenge on Do Kyung for ruining his relationship with Hae Young.

Duk Yi shows up at Do Kyung’s home to express her fear that Do Kyung’s appearance at the family wedding will be taken to mean that he and Hae Young intend to marry. If they break up, it will mean that Hae Young has a second cancelled wedding under her belt. Do Kyung says nothing and Duk Yi leaves.

When Hae Young calls, Do Kyung preemptively claims to be busy tomorrow, so he will not be able to attend her cousin’s wedding. He simply offers to cook her dinner after the wedding, and Hae Young accepts. Hae Young reveals to Duk Yi that Do Kyung won’t be coming to the wedding, and Duk Yi remains poker faced at the news.

Do Kyung may not be at the cousin’s wedding, but the gossiping about Hae Young’s marriage status continues to dog her and her parents. On the ride home, Duk Yi and her husband must bite their tongue as Hae Young talks flippantly about marriage.

Jin Sang tags along on Do Kyung’s grocery shopping to avoid Soo Kyung, who he still cannot decide whether he can kiss or not. He tries to give advice to Do Kyung about how to cook for women, but is stopped short by Do Kyung’s suggestion that he buy a melon for Soo Kyung. Then, Soo Kyung shows up suddenly asking for a kiss before running away.

Hae Young insists on taking photos of Do Kyung’s dinner before eating to capture this special moment. Once she has had a taste, she applauds his work. Do Kyung tells her that she looks pretty as she slurps on noodles, and it makes Hae Young giggle with happiness.

The 24 hours has past, and Soo Kyung is ready to kick Jin Sang out of the house. Jin Sang cannot commit to Soo Kyung, but he also cannot abandon the baby. He asks if she can kiss him, and she cannot say for sure. They try to kiss outside the house with much difficulty before they are defeated by muscle cramps. As Soo Kyung walks away, Jin Sang suddenly grabs and dips her, and they finally succeed at locking lips.

Hae Young reads aloud a letter written to her by a high school boy that pretty Hae Young had withheld from her out of jealousy over her close relationship with her parents. With the return of the letter, plain Hae Young comes to realize that pretty Hae Young was as insecure as she was, and feels sad rather than comforted by the knowledge.

Hae Young is struggling with Do Kyung over access to the photo of the boy who wrote the love letter when Duk Yi calls. Hae Young initially lies about staying over at a friend’s when Duk Yi calls her bluff, and then, threatens to come get her if she doesn’t leave Do Kyung voluntarily.

Hae Young storms home and challenges the idea that night time is her only opportunity for naughty behaviour. Duk Yi objects to Hae Young’s lack of pride, openly hanging out with a man who intends to break up with her. That is when Duk Yi reveals that Do Kyung made his lack of commitment to Hae Young known when he chose not to attend the cousin’s wedding.

When Do Kyung calls, Hae Young must lie about the reason she is crying. She begs off the phone, and tries to comfort herself as she falls asleep. The next morning, Hae Young puts on a CD, and when her mother warns her not to dance, she leaves the house to comfort herself with chicken and beer. Her friend, Hee Ran (Ha Shi Eun) shows up and asks why Hae Young is suddenly glum again. She thinks Hae Young is rushing into marriage, but for Hae Young, love goes hand in hand with the possibility of a long term future together. 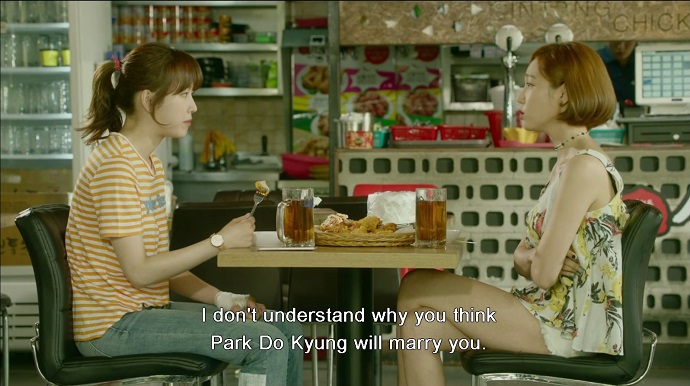 After finding himself unable to reach Hae Young by phone, and faced with his mother’s financial woes, Do Kyung manages to run into Hae Young kicking a can as she walks down the street. Hae Young finally blurts out that she does not feel that he cares as strongly for her as she does for him. Do Kyung insists on a goodbye hug, which Hae Young sulkily agrees to before leaving.

Do Kyung goes to visit Tae Jin to offer anything in return for letting him live. Tae Jin has been drinking, and immediately kicks Do Kyung onto his knees when he comes inside his apartment. He is still bitter about having his life upended by Do Kyung as a result of a mistake, and beats a willing Do Kyung. 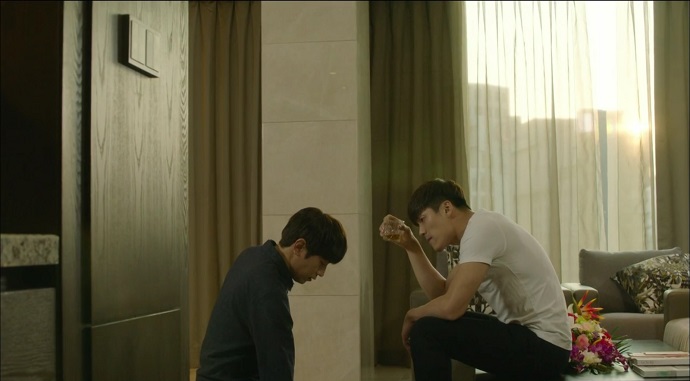 Do Kyung survives the beating and is able to answer the phone when Hae Young calls. She wants to see him even if he does not love her as much as she loves him. As he walks to meet her, he contemplates regret over failing to be honest with Hae Young, and hurting her in the process. However, Do Kyung does not want to burden her with the knowledge of his impending death. When he meets with Hae Young, she is horrified by the state of his face. Do Kyung apologizes for not coming to the wedding then promises to stay with her until he dies, but decides not to reveal the reason he chose not to publicly commit to marrying Hae Young.

Do Kyung runs down the street at night as he confronts his vision of being mowed down by Tae Jin’s car.

I have to say that this episode felt very dragged out, and that any cute, loving moments between Hae Young and Do Kyung were overshadowed by his inability to reveal his imminent death to her. It was refreshing to have the male lead question his decision to keep Hae Young ignorant, and admit that he does it for his own peace of mind rather than her own good.

While Hae Young and Do Kyung mope around each other, Soo Kyung and Jin Sang have their own ridiculous struggle. I cannot believe that Soo Kyung can only see two possible outcomes of the unplanned pregnancy: she moves out of country, or she and Jin Sang become an item. The obvious third choice is to simply co-parent as two responsible adults who are not romantically involved.

Maybe, the moral of this episode is that love makes you unreasonable, and incapable of having an honest conversation with your significant other. It makes me wish that consistent voice of reason, Hee Ran would take over as the main subject of this drama, because she seems to have a good time with lots of boys while keeping her wits about her.

Here’s Soo Kyung and Jin Sang having a hot kiss. Maybe, we can look forward to the crazy sex that we know these two are capable of having, now that they have resigned themselves to giving a go at being a couple for the sake of the baby.