Skip to content
Side dish: It’s rhubarb season! Here’s a recipe for strawberry rhubarb scones from Heather Christo, in case you have some rhubarb that you don’t know what to do with.

After Do Kyung (Eric Mun) confesses his love to her, Hae Young (Seo Hyun Jin) can’t contain herself and shouts her reply from the bus window on their way back to her parents’ house. At her parents’ doorstep, Do Kyung is loath to depart, but when Hae Young’s parents make their presence known in the midst of their flirting, Do Kyung bows and runs for it. As Hae Young mom, Duk Yi (Kim Mi Kyung) expresses her disapproval of Hae Young’s idiocy, Do Kyung goes home in a haze of loooooove.

The next morning, Hae Young is also in a haze of love, while Do Kyung goes to find a dispirited Jin Sang (Kim Ji Seok), who is sleeping at his office. Jin Sang feels terrible for being sent away by the pregnant Soo Kyung (Ye Ji Won), who saw right through his efforts to man up. Do Kyung awkwardly comforts the needy and embarrassed Jin Sang.

Meanwhile, Soo Kyung is doing yoga at the office and listening to classical music. When her subordinate knocks on the door, Soo Kyung transforms back into a hard-nosed manager, then lets him in. She coldly rejects his report, but when he leaves, she turns the classical music back on.

Back at his own office, Do Kyung’s stepbrother, Hoon (Heo Jeong Min) assures him that he and the rest of his co-workers are not going to leave the company and are looking for a new office instead. They’re interrupted by the sudden, dramatic arrival of Do Kyung’s mother, Ji Ya (Nam Gi Ae), who begs him to apologize to Chairman Jang and dump Hae Young. When he refuses, Ji Ya takes this as a sign that he’s punishing her. Ji Ya is so taken aback when Do Kyung assures her that everything is his own fault, that she calls Soo Kyung to find out if Do Kyung is sick.

Back at her office, Hae Young is congratulating her flowers on not wilting, when Do Kyung calls to invite her and Soo Kyung to dinner. Hoon, Soo Kyung, Do Kyung and Hae Young end up having dinner at their house, but the atmosphere is a little off, as Do Kyung has to threaten Hoon into keeping quiet about Tae Jin taking away his studio. But, everything turns out okay as Hae Young demonstrates to Do Kyung’s siblings the crazy depth of her love for Do Kyung. The atmosphere goes off again when Hae Young remarks on Jin Sang’s absence.

Hae Young and Do Kyung go upstairs after dinner, where Hae Young asks Do Kyung to record a song for her. When he gives her a gift, Hae Young starts to get anxious over how happy she is. 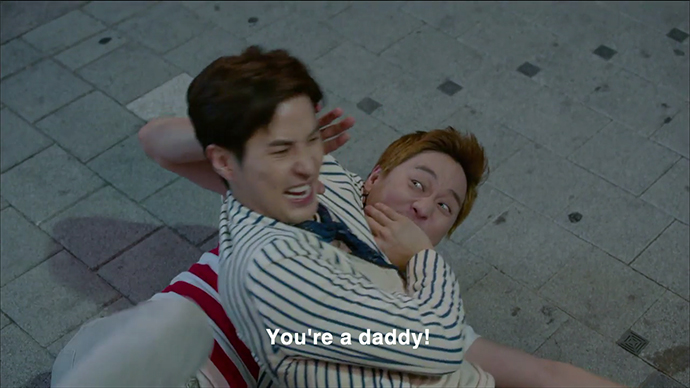 Meanwhile, Hoon finds Jin Sang partying it up at a nightclub. Hoon yells at him in front of everyone about abandoning the pregnant Soo Kyung, pointing out that she’s probably still in love with him. Jin Sang chases Hoon out and wrestles with him on the sidewalk, but then goes back to the club. Before he can rejoin the party, though, Jin Sang is stricken by the sight of Soo Kyung’s favourite fruit, a melon.

As he drives back from dropping off Hae Young, he spots Hae Young’s ex-fiancé, Tae Jin (Lee Jae Yoon) drunkenly stumbling around. Initially, Do Kyung decides to drive on, but eventually turns around, only to find Tae Jin is now stumbling around on a pedestrian bridge. As a weeping Tae Jin leans over the railing, Do Kyung flashes back to his vision of Tae Jin running him down and hesitates. In the end, Do Kyung saves Tae Jin just before he falls off the bridge, then drops Tae Jin on the sidewalk. Tae Jin is so drunk that he only sees Do Kyung’s shoes before he passes out. As he walks away, Do Kyung vows not to regret this when he dies.

The next day, pretty Hae Young (Jeon Hye Bin) bows her head to Chairman Jang and begs him to drop his revenge against Do Kyung. Instead of responding, Chairman Jang throws a temper tantrum and kicks her out. On her way out, pretty Hae Young runs into the newly arrived Tae Jin. When she points out to him how immature his revenge schemes are, Tae Jin wonders why she doesn’t also join in. Pretty Hae Young responds that she doesn’t want to give in to that side of herself. Tae Jin, meanwhile, couldn’t stand being half mean and half nice, and just decided to go with the mean side. Pretty Hae Young points out that Hae Young probably won’t miss him, given how he’s acted since they broke up, and adds that Do Kyung is a better person. Tae Jin clenches his jaw as pretty Hae Young gets in her car and drives away.

On her way to R&D with her team, Soo Kyung is interrupted at work by the sudden arrival of Jin Sang, demanding to know why she hasn’t been returning his calls. She tells him to get lost, and the conversation descends into an argument in French, as her baffled colleagues look on. Finally, she tells him definitively that they can no longer have a sibling relationship either, and runs off into the elevator. Before the door can close, though, Jin Sang sticks his hand in and asks Soo Kyung to try the kiss again. It quickly descends into farce as her colleagues keep pressing the button to peep at the two of them passionately making out in the elevator. 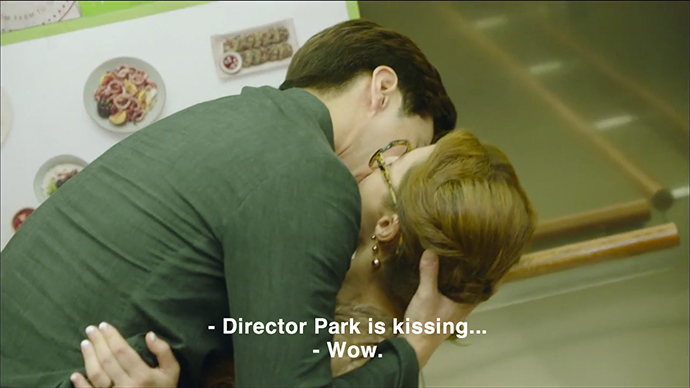 In the kitchen of his office, Do Kyung is suddenly struck by another vision of Tae Jin driving at him, and it’s so strong that he stumbles into the counter and knocks his coffee mug to the ground. In a panic, Do Kyung drives to the psychiatrist’s office, where the two doctorsDo  help him to remember his vision more clearly via hypnosis. In the vision, Do Kyung is lying on the ground bleeding and he looks over at a billboard to see the date, June 2016.

His psychiatrist friend urges Do Kyung to get out of the country, but Do Kyung is too intent on telling Hae Young before it’s too late. He races over to see Hae Young, calls her out of her house, and takes her back to his place. Once there, Do Kyung tells her everything, about how he saw visions of her before they ever met, about how she saved him from being emotionally closed off. He explains that rather than an ability to see the future, that she was what he was thinking about before he died and the power of his love transcended time. Do Kyung tells Hae Young about how he changed the course of events from his visions, bringing the two of them together. But, Do Kyung leaves out the important point that his death is imminent, rather than far into the future.

Hae Young is happy to hear that his love for her is so strong that it transcends time, and so she accepts his story. As the two of them cuddle up on Do Kyung’s bed, he thanks her, and they kiss. The next morning, when Hae Young tries to sneak back into her house, Duk Yi tells her to invite Do Kyung in for breakfast. The meal is silent and awkward, but Do Kyung is touched when Duk Yi puts some pork belly on his rice to show that she accepts him.

As Tae Jin drives his old business partner, Chan Soo to the airport, he notices that Chan Soo’s shoes are the ones he saw at Chairman Jang’s house a few days ago. He also notices that while Chan Soo says he’s going to China, he’s checking the weather somewhere else. These realizations come too late, since on his next visit to the office, Tae Jin discovers that Chan Soo has taken off with all the money, and that they’re being raided. A man tells him that Chan Soo had been stealing from him before, and that Chairman Jang had pulled out his investment because of it. 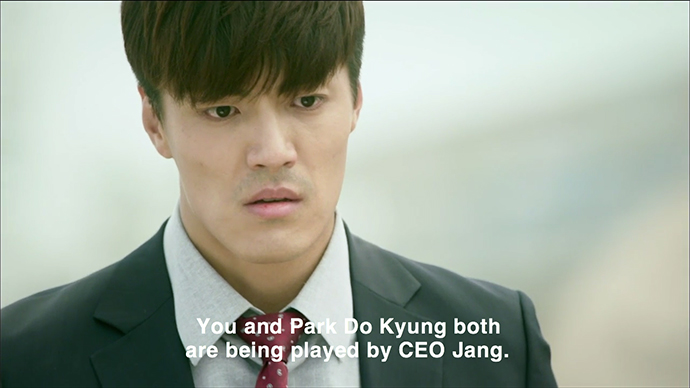 When Tae Jin tracks him down at the harbour, Chan Soo runs away then tries to fight him off, to no avail. Tae Jin beats him up, but Chan Soo does manage to tell Tae Jin that he’s a loser, and he’s being played by Chairman Jang.

That day at work, Do Kyung calls Hae Young to ask if they can go somewhere that evening. She agrees to come along, but later at the photocopier, Hae Young is suddenly reminded of all the times Do Kyung mentioned dying to her. In a panic, she runs to Do Kyung’s office.

Meanwhile, Do Kyung comes out of his office to see Tae Jin, sitting in a car and staring at him. As Tae Jin glares daggers at him, Do Kyung calls Hae Young and leaves her a message, saying that he recorded a song for her and that he loves her. Suddenly, Tae Jin revs his engine and Do Kyung goes running. Tae Jin chases Do Kyung with the car, but stops just before he hits him. As he gets out of the car, Tae Jin sees Do Kyung’s shoes, that they’re the same pair as the person who saved him on the bridge. The two men face off, but Tae Jin turns away, with tears in his eyes, and just drives off.

As Do Kyung walks back, he sees a frantic Hae Young running towards him and he runs towards her. They throw themselves into each others’ arms and the episode ends.

Am I the only one who found that episode a little anticlimactic and disjointed? Look, I wasn’t actually expecting Do Kyung to die, but I barely felt any tension in this episode at all, so when the big payoff moment came, it didn’t feel like a real climax. It was more like the story just wrapped up neatly with the only possible ending, which made all the tears and dramatic music seem a little out of place.

One thing that I did enjoy about this episode was how physically affectionate Do Kyung and Hae Young were. All too often in Kdramas, once the big confessions come, physical affection either disappears or becomes a little too dramatic. In the case of Do Kyung and Hae Young, it’s just the opposite; they can’t seem to bear being apart, and it’s a nice change.

We’re nearly at the end of “Oh Hae Young Again”, and there’s just two things I really want to get off my chest. First, I don’t know what language Jin Sang and Soo Kyung are speaking, but it only has a passing acquaintance with French. Second, I’m a little sad at how miserable Tae Jin has been this entire show, but I’m happy at how good he looks doing it. Lee Jae Yoon has played more cheerful characters than Tae Jin, but his hair has almost never been this good and that seems to make all the difference. Since you never get to see his fantastic abs on this show, you should go check him out on Instagram. You’re welcome.