Side dish: Ha Won appears destined to dine alone for the immediate future so she can eat as many pickled dishes as she wants. Instead of the usual Korean pickled foods, she should try garnishing her meals with Pikliz (Haitian Pickled Vegetable Relish). 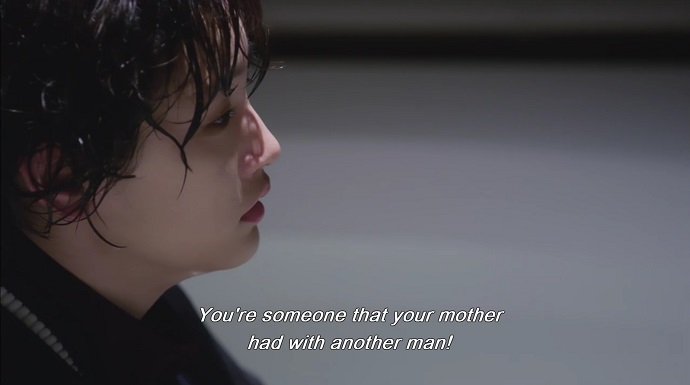 Homeless orphan, Ha Won (Park So Dam) is soaked and pathetic when she is brought into palatial bachelor pad, Sky House. While she dries off and puts away her mother’s ashes, the Chairman’s secretary, Yoon Sung (Choi Min) informs the Chairman’s three grandsons that Ha Won will be living with them. The chaebols uselessly voice their objections, before Yoon Sung announces that the one condition of Ha Won’s stay is that dating is strictly prohibited.

Despite her resolve not to date, within the first few days of her stay at Sky House, Ha Won finds the no dating rule to be under constant threat. Firstly, by the living arrangement: Ha Won’s bedroom faces the same courtyard as those of playboy, Hyun Min (Ahn Jae Hyun) and misfit, Ji Woon (Jung Il Woo). Secondly, by her repeat close encounters with her house mates. 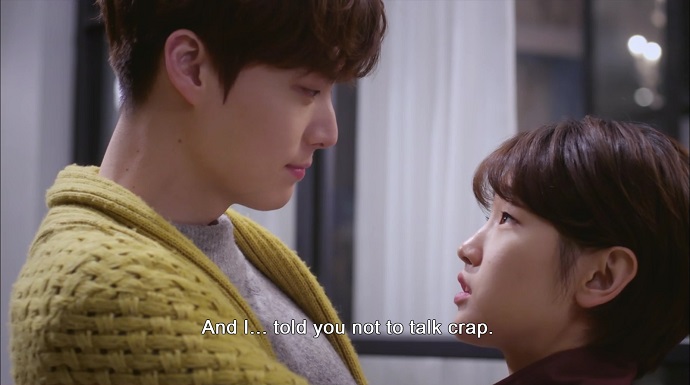 Hyun Min maintains the charade of being engaged to Ha Won. Though he secretly promises Yoon Sung that he will abide by the no dating rule, Hyun Min enjoys teasing Ha Won and tricking her into getting up close and personal with him.

Ji Woon decides to move back into Sky House in order to learn more about the father that abandoned him and his mother. When Ji Woon is not trading barbed words with Hyun Min, he taunts Ha Won about her greedy bid for money. Despite his outward hostility, Ji Woon finds himself acting protective of Ha Won, swinging her in an uncomfortably intimate manner after she almost walks into a saw in his personal workshop. 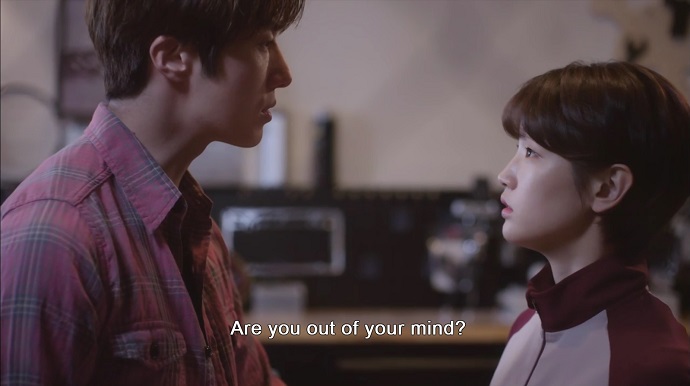 Ha Won finds a fourth resident heartthrob in Yoon Sung. Carrying out the Chairman’s command to treat Ha Won as a special guest, Yoon Sung personally cooks her dinner, retrieves her belongings from her stepmother and stepsister, then picks out and buys her a whole new wardrobe. When Ha Won is mistaken as a new servant by the housekeeper, Yoon Sung is quick to reprimand the older woman. Yoon Sung promises Ha Won that he will take care of her, and apologizes in advance for the hardships she will face in her dealings with the Chairman’s grandsons. 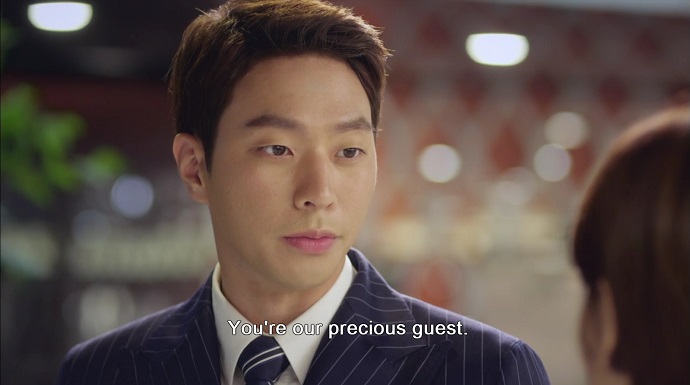 A perfect depiction of the Sky House dynamics plays out in the garden. After Yoon Sung is suddenly called away, leaving Ha Won’s belongings unattended, Ha Won accidentally pushes her own suitcase and box of knickknacks into a pond. Ha Won wades into the water to retrieve her belongings while Hyun Min and Seo Woo stand on shore, incredulous that Ha Won would drench herself for such valueless objects. Seo Woo eventually brings Ha Won a net on a pole to allow her to continue retrieving items on land. Only Ji Woon gets his feet wet in order to retrieve the bouquet of dried flowers that Ha Won had brought to her mother’s memorial. However, Ji Woon keeps his efforts a secret, choosing instead to scold Ha Won for being careless while Hyun Min marks his territory by placing his arm around Ha Won. The cousins bicker until Ha Won loses her temper with all of them.

Back at Ha Won’s familial home, her father instructs the gleeful stepmother not to let Ha Won back in the house. On his way to work, the father discovers a lead in his search for tae kwan do master, Kang Young Jin. Keeping in mind that Ha Won and her deceased mother used to practice tae kwon do, the suspicion is that Kang Young Jin is Ha Won’s biological father. Meanwhile, Ha Won’s stepmother and stepsister learn of her new living arrangements from Yoon Sung when he comes to retrieve her belongings. The stepsister proceeds to harass Ha Won’s friend and co-worker at the coffee house until she is able to confirm that Ha Won now lives at Sky House. 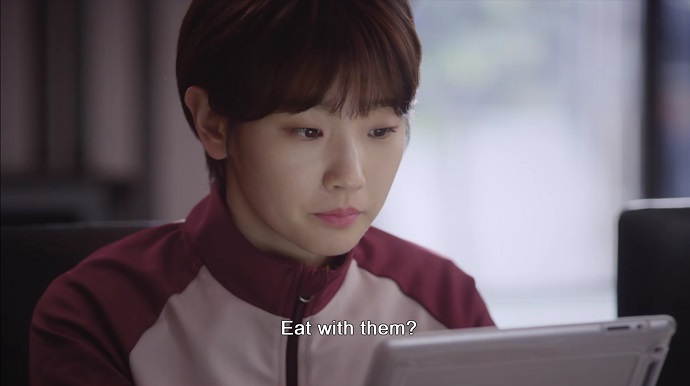 While dining on breakfast alone, Ha Won receives a video call from the Chairman. She learns that her first mission is to bring all three cousins together for a meal. It is only while Ha Won is signing a contract with the Chairman that Yoon Sung reveals how high the stakes are. Every successfully completed mission will bring a bonus, but any failed mission will result in Ha Won’s eviction from Sky House. Yet, Ha Won appears enthusiastic about tackling her first mission.

At the mall, Ha Won figuratively runs into Hyun Min’s childhood friend, Hye Ji (Son Na Eun) after literally running into another customer. Hye Ji saves Ha Won from the older woman who attempts to extort payment from Ha Won for supposed damage to her fake designer purse. When Hye Ji asks Ha Won how she and fiancé, Hyun Min met, Ha Won has a hard time explaining, and feels guilty about lying to the agreeable Hye Ji. Yoon Sung shows up to retrieve Ha Won, and reveals that Ha Won now lives at Sky House. Hye Ji is devastated by this news, and quickly retreats. Hye Ji meets up with Ji Woon, and after confirming that Ha Won is living at Sky House, she decides to go confront Hyun Min at home. 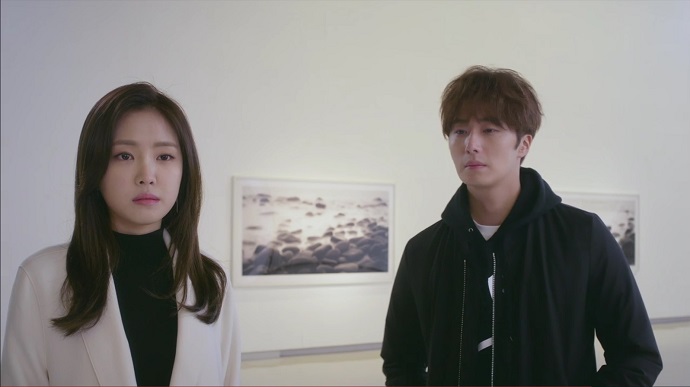 At Sky House, Hyun Min reveals to Ha Won that her precious school uniform is in his possession. Threatening to cut the uniform up, Hyun Min manages to pressure Ha Won into entering his bedroom. Ha Won compares Hyun Min to the assholes who used to visit her convenience store at 4am, and head butts him after pretending to dip in for a kiss. Hyun Min, in turn, tricks Ha Won into an embrace and is seemingly on his way to planting a kiss when Hye Ji arrives with Ji Woon. Ji Woon spots Hyun Min and Ha Won about to kiss, and takes Hye Ji’s head in his hands to prevent her from witnessing a scene that will undoubtedly break her heart.

This episode was pretty over the top with throwing temptation in Ha Won’s way, highlighting every moment with magical fairy music. As sensible as Ha Won might be about not dating any of the boys, the show is not really playing fair, with both Hyun Min and Ji Woon repeatedly placing her in compromising situations. These scenes of Ha Won in the arms of the two cousins are played for romantic titillation but, after Ha Won compares herself to Pretty Woman during the shopping spree, you realize what a precarious situation the destitute, orphaned Ha Won is in. Thus, I hope Ha Won takes control of the situation at Sky House soon, before she finds herself batted around like a plaything between warring chaebols. 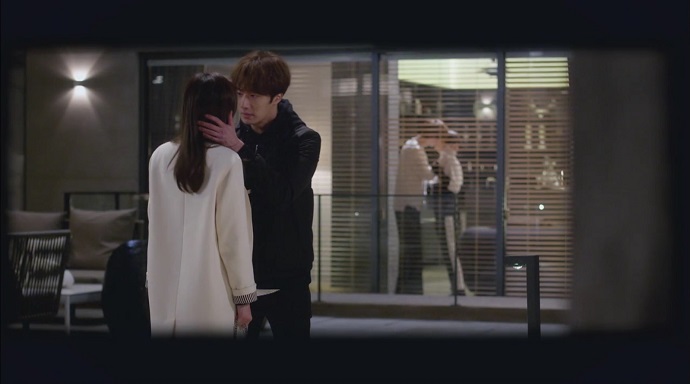 If Ha Won is at risk of becoming a passive pawn, Hyun Min and Ji Woon are at risk of becoming parodies of themselves, and it is only the third episode. Hyun Min better start showing more depth beyond the careless playboy, or else, Hye Ji’s longtime attraction towards him will seem misguided. Ji Woon also needs to stop acting like he has a chip on his shoulder while being a complete sap when no one is looking. That kind of dual personality begins to come across as sadomasochism, since he will never be rewarded for his good deeds.

If I appear to be taking a serious stance on what is essentially a comical show, it is only because I see a lot of promise, and I don’t want it squandered on obvious pitfalls. Please don’t turn the plucky heroine into wide eyed innocent who cannot voice her opinion between the squabbling cousins. Please don’t leave the male leads as one-dimensional stereotypes.

I do wonder how the show intends to redeem Ha Won’s father. It seems pretty unforgivable to throw away the girl you raised, even if she is not your biological daughter. He appears to be hunting down a man who could be Ha Won’s biological father, but the fact remains that he cut Ha Won adrift without a safety net.

On the plus side, I am so relieved that the writer has decided not to create an antagonistic relationship between the two female leads. Hye Ji appears determined to be genial towards Ha Won, because rightly, her issue is with Hyun Min, and not Ha Won. The scene of the two women talking was nicely free of melodrama, yet still buoyed by Ha Won’s guilt and Hye Ji’s heartache.

I also approve of Yoon Sung cooking his way into Ha Won’s heart. Please have more scenes of Yoon Sung, or any of the men, cooking. 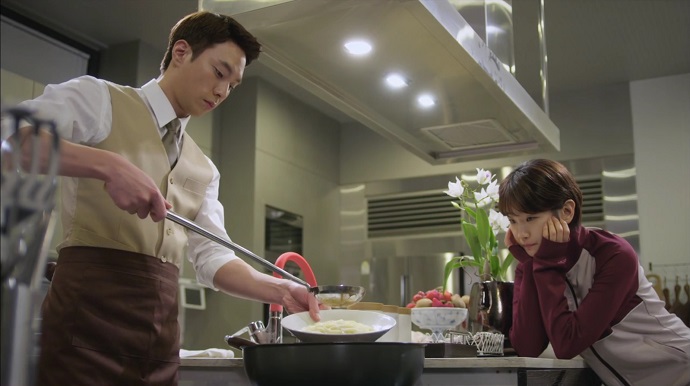