Side dish: We are in the middle of peach season, and if you want to make a dessert that isn’t pie, try Frozen Peaches with Strawberries and Mint. 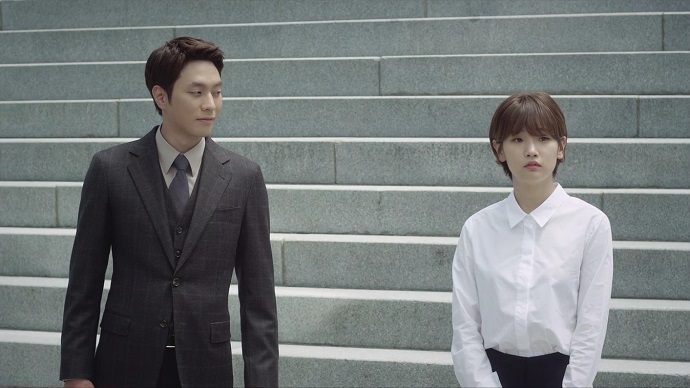 Outside the memorial ceremony for the Chairman’s three sons, Ha Won (Park So Dam) waits anxiously with Secretary Yoon Sung (Choi Min) for the Chairman’s grandsons: musical Seo Woo (Lee Jung Shin), playboy Hyun Min (Ahn Jae Hyun), and misfit Ji Woon (Jung Il Woo). They witness the arrival of the mothers – Seo Woo’s is flamboyant and Hyun Min’s is hostile – before both Seo Woo and Hyun Min appear. Seo Woo had a change of heart after recording a song he wrote about his father. Hyun Min feels compelled to attend after finding out from the housekeeper that Ha Won prepared food for the memorial even though Ha Won has never been able to do the same for her own mother. 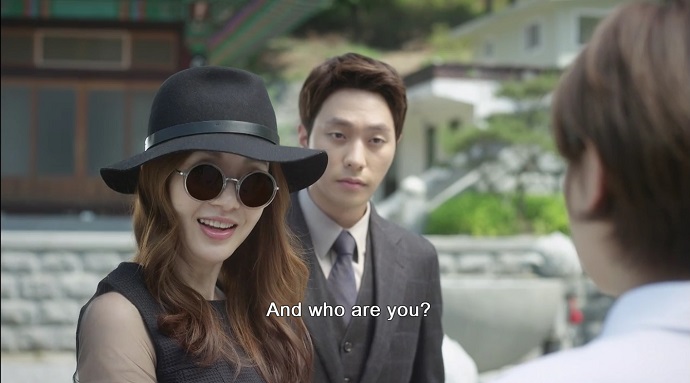 Ji Woon does not show up, and Ha Won apologizes to the disappointed Chairman for failing the mission. However, Yoon Sung learns from one of the monks that Ji Woon had visited earlier in the day. After Ji Woon found the rose that Ha Won had left at his mother’s memorial, he had brought the flower to his father’s memorial that morning. Ji Woon’s appearance is happy news for the Chairman following a lunch marred by bickering over succession.

As Hyun Min is driving his mother from the memorial ceremony, she pesters him about his inheritance. Hyun Min accuses her of having a one track mind, and based on the final words she spoke before abandoning him as a child, he appears to be correct. She is silenced when he reveals that he is driving her directly to the airport then warns her never to return to Korea. 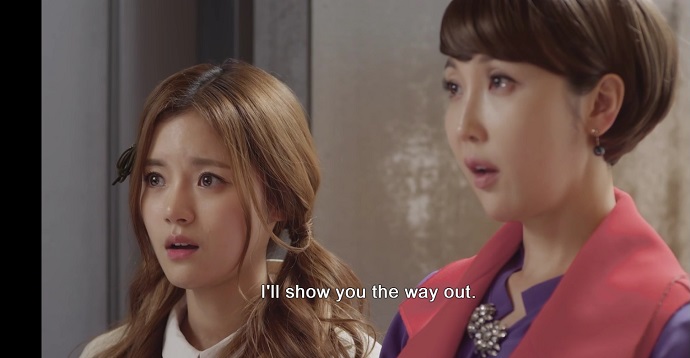 Ashamed of her failed mission, Ha Won moves out of Sky House, leaving only a note that quickly gets lost on the floor of her bedroom. Shortly after her departure, her evil stepmother and stepsister arrive on a mission of reconnaissance. They manage to fool the housekeeper into letting them loose in the house, but are found by Yoon Sung who knows better. He unceremoniously throws them out, though not before the stepsister destroys Ha Won’s school uniform in a jealous rage after finding it in Hyun Min’s bedroom. Later, the stepsister puts a scandalous spin on Ha Won’s living arrangement at Sky House on their high school message board.

Ha Won seeks out her classmate and former co-worker, Ja Young (Cho Hye Jung) at the coffee house to ask if she can stay the night. Ja Young cannot accommodate Ha Won, so when Hyun Min’s childhood friend, Hye Ji (Son Na Eun) walks into the coffee house, she unloads Ha Won onto her. 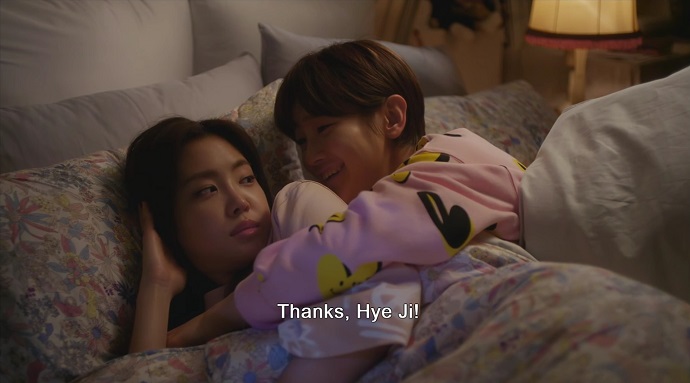 Hye Ji has no choice, but to invite Ha Won back to her place. After Ha Won spots a childhood photo of Hye Ji, Hyun Min and Hye Ji’s older brother, Hye Ji reveals that her older brother died a long time ago, and that Hyun Min was not always the shallow playboy he is now. Ha Won admits that her engagement to Hyun Min is a sham, and Hye Ji is visibly relieved. She offers to attend Ha Won’s graduation the next day since Ha Won does not know if her family will show up.

After finding out about Ha Won’s impending graduation, Ji Woon attempts to remain indifferent, while Hyun Min dashes out to find a replacement for Ha Won’s ruined uniform then leads a convoy of food trucks to the high school to curry favour with her classmates. Meanwhile, Seo Woo goes racing to the high school after learning from social media that his outraged fans are ready to lynch Ha Won for living at Sky House. 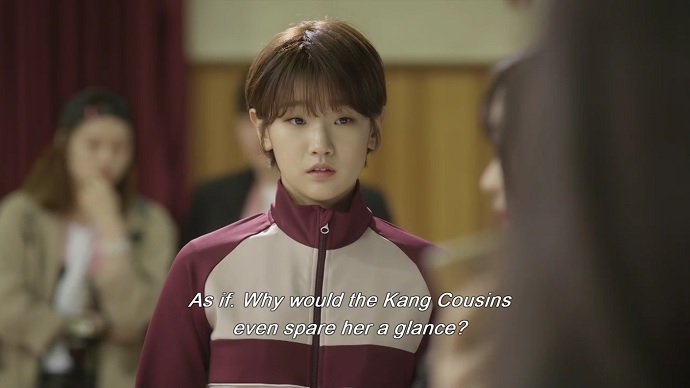 The path to her diploma is a thorny one as Ha Won is forced to attend the graduation ceremony in her gym uniform, and ostracized by her classmates thanks to her stepsister’s gossipy message post. Her father fails to show up, and she is taunted by her stepmother instead. Things go from bad to worse when the angry fans of the Chairman’s grandsons drag her into the high school recording studio where no one will hear her scream as they take a pair scissors to her clothes.

Ji Woon is standing outside the high school, wavering over whether to attend the ceremony when he overhears the bullies’ plans for Ha Won. He races in, and after dispatching the teenage boys on guard duty outside the studio, Ji Woon stops the girls from cutting any further into Ha Won’s clothing. 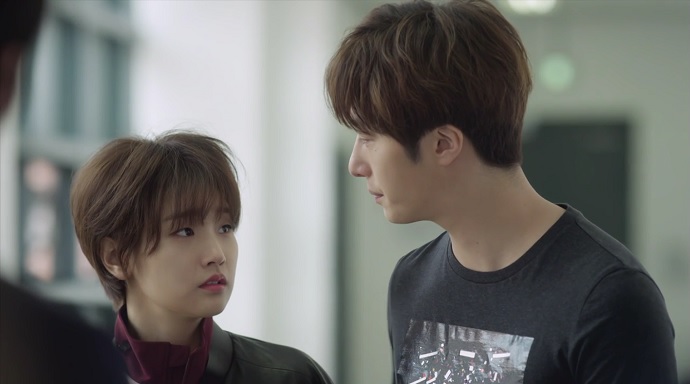 As Ji Woon is walking Ha Won out with his jacket on her shoulders, more thugs arrive, and it looks like Ji Woon is going to have to fight everyone. Suddenly, Hyun Min appears and redirects the mob by offering up his expensive sports car as a gift. He throws the car keys out the window and the teenage thugs race downstairs only to find the keys in Yoon Sung’s possession. Yoon Sung has just arrived on the orders of the Chairman to bring Ha Won back to Sky House, and he demonstrates to the teen thugs that he is proficient at martial arts.

Now that they are safe, Hyun Min dismisses Ji Woon despite Ha Won’s protests, and Ji Woon storms away. Back in the recording studio, after Ha Won changes into her new uniform, Hyun Min accidentally broadcasts their subsequent conversation to the entire school. Thus, when Hyun Min confesses his feelings for Ha Won and she rejects him, the spectators include Ha Won’s stepmother, stepsister, Ji Woon, Yoon Sung, as well as Seo Woo and Hye Ji who arrive belatedly on the scene to add to the chaos. 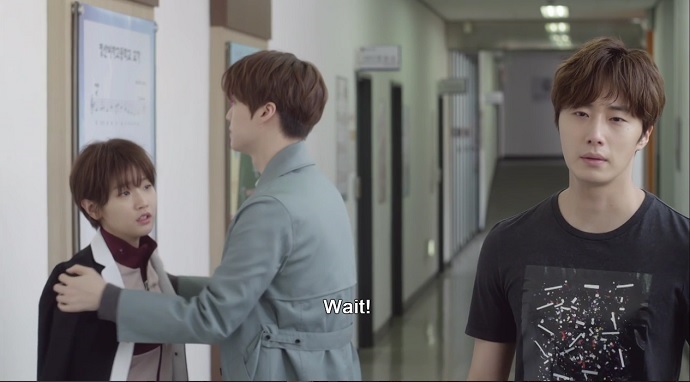 After seeing Hye Ji’s face fall, Ji Woon marches to the recording studio and shuts down the broadcast. Thus, he and Hye Ji are the only witnesses when Ha Won states that her engagement with Hyun Min is a sham, and an undeterred Hyun Min suggests that they start dating for real.

This was a very entertaining episode. Ha Won and Ji Woon did not spend much time together, though they still managed to have a hot moment while facing down the teenage mob. So, let’s take this opportunity to focus on some of the other characters. 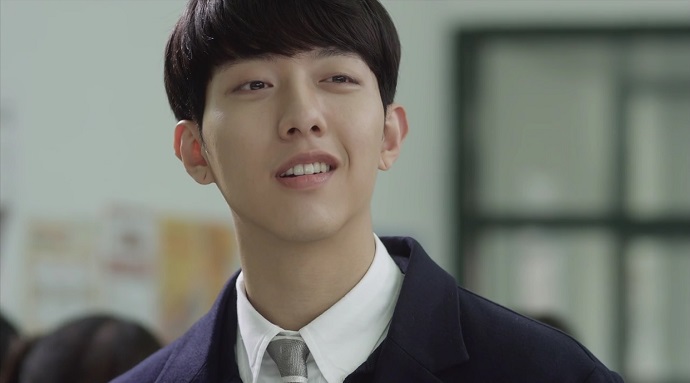 Seo Woo got shafted in this episode more than usual. For a character who has been nothing more than a nice guy to Ha Won, this should have been his chance to shine; he sang a heartfelt song for his father then rushed to Ha Won’s rescue. Unfortunately, Lee Jung Shin’s voice was really weak, and made me think that his character’s pop star status must be based on charisma and great songwriting, and not vocal talent. Then, by the time Seo Woo arrived at the high school, both Ji Woon and Hyun Min had already diffused the situation. Poor Seo Woo has so little at stake in the game that he was the only one who looked pleased to hear Hyun Min confessing his feelings to Ha Won. 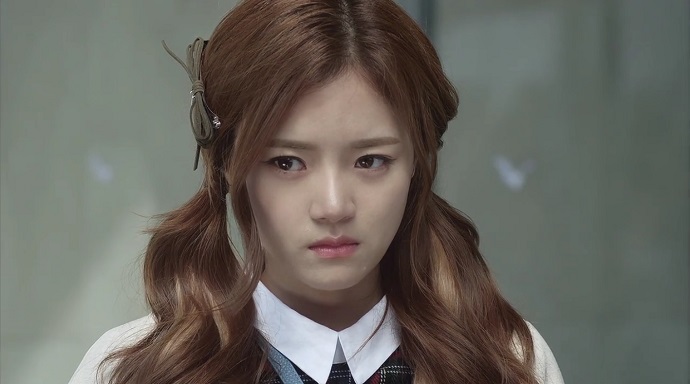 In contrast, Ha Won’s stepmother and stepsister are really making the most of their brief appearances. There is a train wreck appeal to how unrelentingly horrible they are. I especially enjoyed the stepsister frolicking in Hyun Min’s bedroom then losing her mind over finding Ha Won’s uniform. Go Bo Gyeol is fantastic in conveying simmering madness as her character plots to destroy Ha Won. 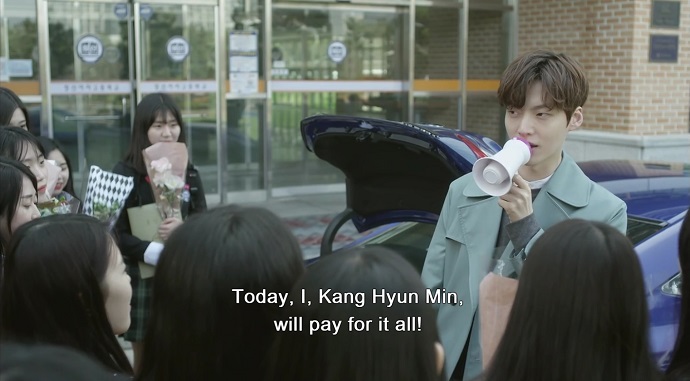 I am also enjoying how ridiculous Hyun Min is, and I can’t help but sense that Ahn Jae Hyun is enjoying playing such an overconfident character who tosses money at any problem. The sight of him whipping out the tiny electric megaphone then being abandoned by adoring teenage girls for free food was absurd. The only downside of Hyun Min is that his lack of depth makes Hye Ji’s perpetual sad face incongruous.

I leave you with a shot of pervy Hyun Min as he suggests to Ha Won that it is unnecessary for her to hide while changing into her new uniform. 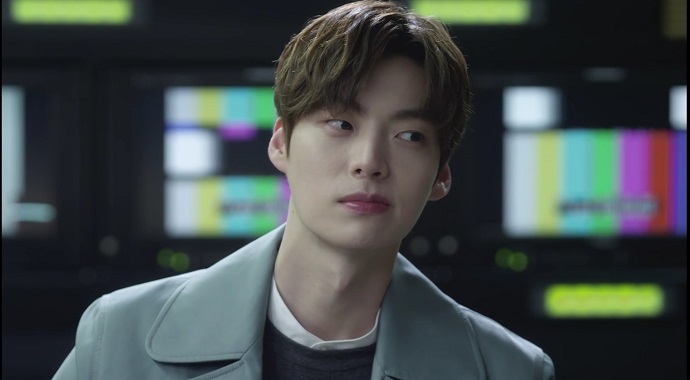