Side dish: White Day is March 14 and it is when men are supposed to gift the women who gave them chocolates on Valentine’s Day. We are nowhere near White Day, so men will have plenty of time to perfect the recipe for White Day Pink Diamond Cookies.

After Ji Woon (Jung Il Woo) announces that Hye Ji (Son Na Eun) will be staying at Sky House for the time being, Ha Won (Park So Dam) tries her best to be welcoming. Hye Ji acknowledges that the situation will be uncomfortable, then makes it even worse for Ha Won by pointing out that Ji Woon has always rushed to Hye Ji’s rescue.

The women are less hospitable with the men. Hyun Min (Ahn Jae Hyun) intercepts Hye Ji in the living room to explain his failure to answer her phone call. For Hye Ji, it’s too little, too late; she cuts him off then walks away. Ji Woon comes to Ha Won’s bedroom to return Hye Ji’s purse, and Ha Won gives him the cold shoulder. Ji Woon sheepishly asks about Ha Won’s trip home on public transit. Ha Won is sulky and flippant. 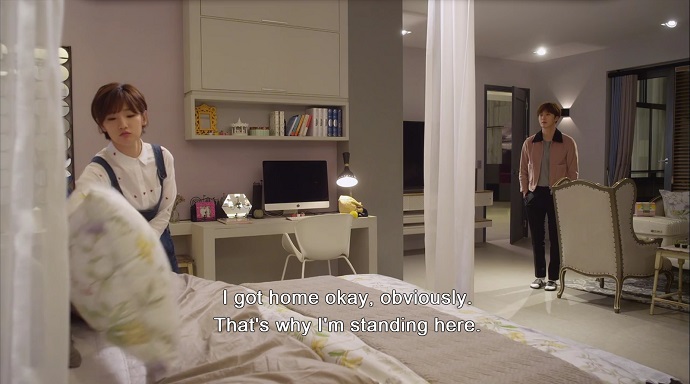 Ha Won wakes up to an empty house, and finds out from the housekeeper that Hye Ji’s presence has disrupted the household, and made Hyun Min and pop idol, Seo Woo (Lee Jung Shin) self conscious. When Ha Won claims that the same thing happened when she first arrived, the housekeeper insists otherwise. The kicker is when the housekeeper notes that she has never seen Ji Woon act as kind as he does towards Hye Ji.

The housekeeper marvels at Hye Ji’s beauty, and though Ha Won scoffs at the thought, she finds herself enraptured with Hye Ji’s morning glow. Ha Won retreats to her bedroom to give herself a pep talk and a makeover. After she emerges, Seo Woo seems amazed by her transformation and calls his cousins out give their opinion on Ha Won’s new look. Ji Woon shows up, and an embarrassed Ha Won runs for her bedroom. Seo Woo notes that Ha Won is acting weird, and it causes Ji Woon to wonder if she is still mad at him.

Hye Ji is unable to see her father at the police station and finds her requests for help from her father’s associates rebuffed. After witnessing Hye Ji’s distress, Hyun Min calls in a favour from a friend to have his lawyer father put in a good word for Hye Ji’s dad, and to receive a letter for Hye Ji from her father. However, when the friend mocks Hye Ji, Hyun Min does not hesitate to lash out at him.

Hyun Min is cocky when he brings Hye Ji the letter from her father. As Hyun Min tries to gloss over failing to answer Hye Ji’s call, she rejects his help and leaves before Hyun Min can give her the keys to the storage locker containing her belongings. He bitterly hands the keys over to Ji Woon, and directs him not to reveal his part in retrieving her stuff.

The next morning, Ji Woon takes Hye Jie to the storage locker full of her dressmaking equipment and materials. He reluctantly takes credit, and accepts her offer of a free meal. To Hye Ji’s chagrin, his meal choice is instant noodles at the convenience store, which he admits to have enjoyed frequently with Ha Won. Hye Ji instantly guesses that he has a special relationship with Ha Won. Ji Woon skirts the issue, buys a cheap White Day gift for Ha Won on the spur of the moment, then unsuccessfully hides it from Hye Ji.

Poor Ha Won finds herself dining alone at Sky House, prompting the housekeeper to observe that Ha Won has been neglected by Ji Woon during Hye Ji’s stay. Ha Won decides to drag Hyun Min away from his video game so she won’t have to dine alone. However, the knowledge that Ji Woon and Hye Ji are out together puts Ha Won and Hyun Min in a foul mood and they take it out on each other. They have an awkward encounter with Ji Woon and Hye Ji when the latter couple return.

Ji Woon stops by Hyun Min’s bedroom to confirm that he kept Hyun Min’s good deed a secret, as requested. Hyun Min asks Ji Woon to continue to serve as his proxy in helping Hye Ji, since she is not comfortable receiving Hyun Min’s assistance. Ji Woon makes it clear that he is only acting as a friend to Hye Ji.

Ji Woon is amused to find Ha Won muttering to herself about him and Hye Ji. He apologizes for abandoning her to rescue Hye Ji, but loses the nerve to give her the White Day gift. Instead, he proposes going for another drive, because he has something to say. He departs without making firm plans, leaving Ha Won wondering what Ji Woon wants to tell her.

After Seo Woo encourages her to be nice to pathetic Hye Ji, Ha Won eagerly volunteers to do laundry for her. She ends up shrinking Hye Ji’s clothing, but Hye Ji makes light of the accident, saying she’ll just go shopping for new clothes with Ji Woon. Hye Ji then reveals that she has made her feelings for Ji Woon known to him, and she is going to try to date him. When Ha Won asks what Ji Woon’s response is, Hye Ji guesses that Ji Woon returns her feelings.

The Chairman is having lunch with his wife, Madame Ji when she gives him a gift. He is perturbed to see that it is not the flashy tie he spied her buying, but says nothing. He orders his secretary, Yoon Sung (Choi Min) to place Madame Ji under surveillance without explanation. 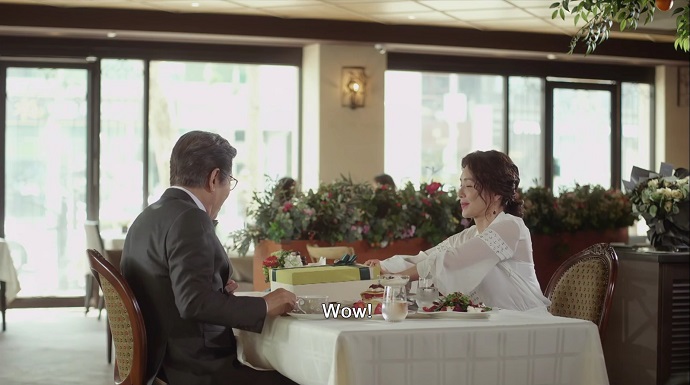 Madame Ji is receiving beauty treatments from Ha Won’s stepmother when she learns of the rumours going around that she has been previously married. The stepmother offers to report everything she overhears from other clients, and Madame Ji angrily threatens to have her fired. Madame Ji immediately calls up one of the gossip mongers and threatens her, too.

Madame Ji is true to her word, and Ha Won’s stepmother returns home in tears, having lost her job. When Ha Won’s stepsister learns of her mother’s firing, she can only wail over the loss of opportunity to marry a Kang cousin. 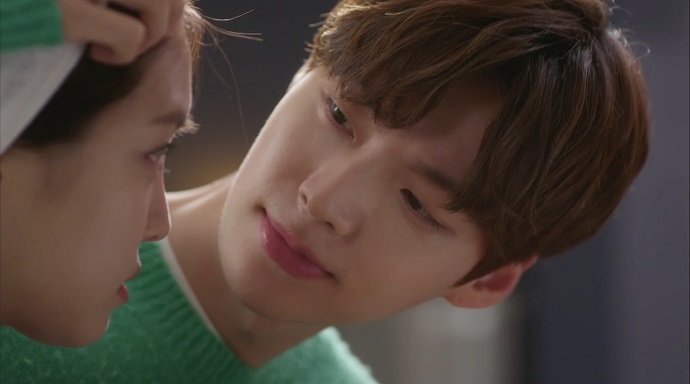 After Hye Ji borrows Ha Won’s warm up suit, Hyun Min mistakes her for Ha Won and acts overly familiar with her. They are both taken aback when they realize who the other is. Hyun Min apologizes and Hye Ji quickly retreats without a word, shaken by their close encounter.

Ha Won goes looking for Ji Woon only to find out from Hye Ji that he is going out with her. Ji Woon returns to the house for his wallet, picks up the White Day gift for Ha Won, and turns around to find her standing before him. Thinking the gift is for Hye Ji, Ha Won angrily tells Ji Woon that she has learned the truth from Hye Ji, and asks him not to give her any more mixed messages before storming out. 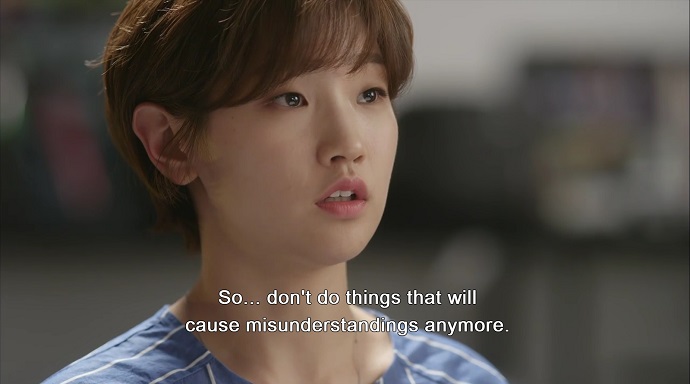 Things go from bad to worse for Ha Won when her supposed biological father, Kang Young Jin shows up at Sky House. She does not recognize him until he reminds her that he used to run the Tae Kwan Do dojo with her mother. Ha Won is shocked to hear Young Jin claim to be her real father then repulsed by his request for financial assistance. When he refuses to leave, Ha Won runs out of the room. A glowering Young Jin vows to return.

Ji Woon stops the car suddenly while out driving with Hye Ji to ask her what she told Ha Won about them. When he learns that Hye Ji told Ha Won that they are dating, he angrily kicks Hye Ji out of the car. Ji Woon rushes back to Sky House, and catches a glimpse of Young Jin leaving. He learns who the stranger is and of his unpleasant visit with Ha Won from the housekeeper.

Ha Won tries unsuccessfully to reach the man who raised her by phone as she wanders the street at night. Meanwhile, Ji Woon calls Ha Won repeatedly while driving around in search of her. After her battery dies soon after answering Ji Woon’s call, Ha Won collapses on a boardwalk, crying for her mother.

Hye Ji has gone from killjoy making sad eyes at Hyun Min, to casual saboteur of Ha Won and Ji Woon’s burgeoning relationship. She is a terrible character, and the only thing that saves her is Son Na Eun’s sleepy depiction of Hye Ji, which lacks any sense of malice. Still, Hye Ji could at least be accused of being supremely selfish in this episode, and the scene where Ji Woon literally kicks her to the curb should have been satisfying.

Unfortunately, watching Hye Ji get abandoned by Ji Woon was not gratifying, because while she deserved scorn for misleading Ha Won, Ji Woon was equally guilty of misleading Hye Ji. He never did give her an answer to her proposal that they date, and he has been showering her with time and attention since she moved into Sky House. What else is a girl supposed to think? Ha Won was equally confused by Ji Woon’s actions.

Whereas Ji Woon’s indecision and the havoc it wrought dampened his heart throb status somewhat, Hyun Min had some great scenes in this episode. His puerile spat with Ha Won at the dining table was fantastic, and his close encounter with Hye Ji while he mistook her for Ha Won was surprisingly hot. Good job, Ahn Jae Hyun; you almost made me forget what a sad sack Hyun Min was otherwise.

The dreaded encounter between Ha Won and her supposed biological father, Young Jin took place, but I was pleasantly surprised at how quickly she rejected him. I was so relieved that the writer did not choose to play out the painful process of her doing her filial duty by begging for money from the Chairman on his behalf then moving out of Sky House for his sake. It is disappointing that they chose to make Young Jin such an obvious dirt bag since a character who could plausibly be a real father to Ha Won would have been more compelling.

I leave you with a final look at Madame Ji taking photos of her food like a blogger for Noonas Over Forks. Between her decisive action taken with Ha Won’s stepmother and the gossiper, and the drama involving that flamboyant tie quickly coming to a boil, Madame Ji may be the one to watch in the next episode.