Side dish: When I have the sads, like this episode has the sads, I tend to raid my ramen stash for dinner. Here’s one of my favourites: MyKuali Penang White Curry Noodle. Add some veggies to the broth if you think you need to be healthy.

It’s a sad beginning to the episode, as Ha Won (Park So Dam) mopes about leaving Sky House, Seo Woo (Lee Jung Shin) mopes about his unrequited love for Ha Won, and Hyun Min (Ahn Jae Hyun) mopes about losing Hye Ji (Son Na Eun). Ji Woon (Jung Il Woo) isn’t moping, but he has a lot on his mind, what with his discovery that his mother used to live at Sky House. Unfortunately, their solitary thoughts are interrupted with the news of the Chairman’s collapse.

Ha Won is the first to arrive at the hospital, eaten up by the guilt that her illicit relationship with Ji Woon brought about the Chairman’s condition. Sensing blood in the water, Madam Ji goes on the attack and berates Ha Won for making the Chairman collapse when he already has liver cancer. Madam Ji tells Ha Won to never come into contact with any of them again. A depressed Ha Won leaves as Ji Woon comes running into the hospital.

Ji Woon is stricken when Yoon Sung drops the bomb that the Chairman had cancer. When Ji Woon goes to call Ha Won, Madam Ji strikes again, and tells Ji Woon that the Chairman paid the rude and impoverished Ha Won off to go away. Angry at her harsh words, Ji Woon leaves in search of Ha Won.

Ji Woon, meanwhile, goes back to Sky House to find Ha Won on her way out. Convinced that their relationship is killing the Chairman, Ha Won breaks up with a devastated Ji Woon and leaves. Hye Ji, meanwhile, finds a place to stay in a friend’s shop.

It’s time for round two of moping, as Ha Won and Ji Woon mope about each other, and Hye Ji and Hyun Min do the same. Meanwhile, Yoon Sung looks appalled that Madam Ji can only think about how to manoeuvre him into a position of power at Haneul Group while the Chairman is in a coma. But, there’s more bad news, when it turns out that neither Seo Woo nor Hyun Min are a match for the Chairman.

The next day, Ji Woon turns detective and tracks down a café from a photo of his mother taken by his father. The café is still in business, and Ji Woon discovers that his parents left notes for each other there until his mother decided to stop meeting his father, so that Ji Woon would be free to love who he wanted. Ji Woon is so devastated that the Chairman would keep his parents apart that he drives off, throwing his cell phone away in the process.

Later, when Hyun Min and Seo Woo wait at the comatose Chairman’s bedside, Ji Woon is nowhere to be seen. Also missing is Yoon Sung, who ominously looms over the Chairman’s desk, and flashes back to his childhood, where his mother ran away from his abusive father and he learned martial arts so he could protect her.

Hyun Min gets a call from the restaurant where the Chairman collapsed, to come pick up his cell phone. While he’s there, he discovers that Yoon Sung and Madam Ji were also at the restaurant and he pieces together that Yoon Sung is lying to him. Yoon Sung, meanwhile, meets with Madam Ji, who tries to hand over her shares in the Haneul Group to him, saying that she finally wants to be a good mother. Yoon Sung looks torn, but doesn’t respond.

Ha Won is back at her old job with her friend, Ja Young (Cho Hye Jung), when her father comes by to visit. He has no good news to impart, only that Ha Won’s mother’s treasured ring actually belonged to the neighbour that her mother died trying to save. They decide to return the ring to the neighbour’s son.

Hyun Min’s suspicions about Yoon Sung mount, but he declines to tell Seo Woo about it. Instead, Hyun Min shows Seo Woo the Chairman’s cell phone. After unlocking it, Seo Woo discovers that the Chairman’s wallpaper is the picture of all of them together taken by Ha Won.

Seo Woo tracks down Ha Won at the café, and asks her to help him find Ji Woon, the Chairman’s only remaining blood relative who hasn’t been tested. Seo Woo gives Ha Won the Chairman’s cell phone to give to Ji Woon.

It doesn’t take much to track Ji Woon down, apparently, and Ha Won goes to see him at his old job. Ji Woon refuses come back to Sky House, but Ha Won gives him the Chairman’s cell phone, to show him that the Chairman has been sending texts to his dead son (Ji Woon’s father) every day since he found Ji Woon. Ha Won tells Ji Woon to stop running away, that he can work his issues out with the Chairman after saving his life. 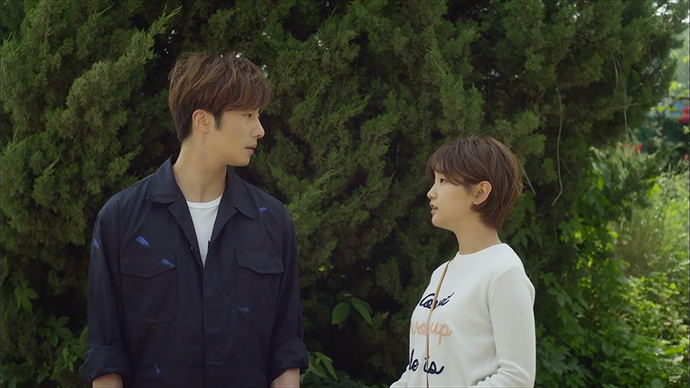 Look, I’m not really sure what’s going on anymore, but this episode managed to hit a bunch of my pet peeves in one fell swoop: noble idiocy, evil rich moms, the male lead running away, the female lead running away, conveniently timed cancer, and a bunch of people acting completely irrationally. I’m surprised because I thought that a pre-produced drama would avoid these random storylines, but I guess my assumption that they were the result of the live shoot schedule was just wrong.

The truth is I could probably handle all of that, because it’s not that unrealistic for a family to act crazy, or for people to run away or sulk rather than have a heart-to-heart conversation. All I needed was a little something to hang on to here, like Hyun Min being hilarious, or Yoon Sung being cute, or Ji Woon and Ha Won being sweet together. Instead, all of those characters got sucked up into the vortex of misery, and left me only with perky Ja Young’s sad cancer story to keep my spirits up.

So, here’s my proposition for the next episode, writers of “Cinderella and Four Knights”: I will put aside my dislike of your chosen tropes, if you will give me at least one fun thing to get me through the episode. I mean, Ji Woon and Ha Won are so cute together! Why keep them apart when you don’t have to?

On a side note, I’m still Team Yoon Sung, because he looked really good this episode despite going over to the dark side.