Destitute orphan, Ha Won (Park So Dam) is catapulted from her difficult life into the home of a trio of feuding chaebol cousins: charming playboy, Hyun Min (Ahn Jae Hyun), angry but caring Ji Woon (Jung Il Woo), and friendly idol, Seo Woo (Lee Jung Shin). Ha Won takes on the mission to turn the cousins into a family, while she fights her growing feelings for Ji Woon, and fends off the emo antics of killjoy, Hye Ji (Son Na Eun).

Side dish: If you’re a poor orphan with a big appetite like Ha Won, this recipe for Skillet Chicken with Orzo and Olives from Budget Bytes will fill you up for the bargain price of $2.57 per serving.

Only 만: I was pretty surprised when you spontaneously decided to recap “Cinderella and Four Knights”. What had you so excited about it?

Junggugeo Kaenada 중국어 캐나다: It was like junk food: a guilty pleasure. The first episode set up a soapy premise that I could get into, and at a decent clip. Plus, Jung Il Woo was finally back in a role that would allow him to play both intense and comedic, and I was eager to see a possible repeat of “Flower Boy Ramen Shop”.

Only: I was also hoping he would lick kimchi off someone’s face, but I think that feat is unrepeatable. 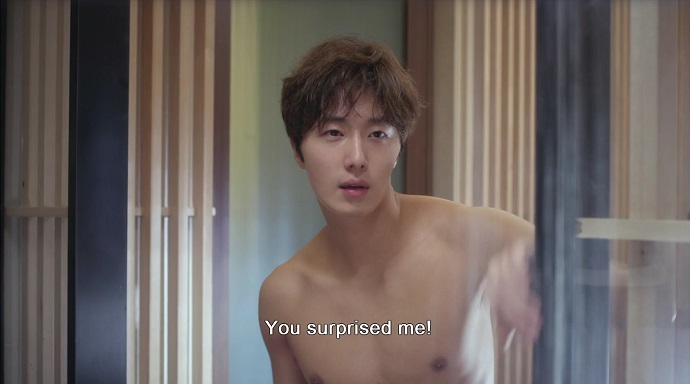 Junggugeo Kaenada: We didn’t get finger licking fun, but we did get a lot of kissing. It was one of my favourite things about this Kdrama: more kissing than the standard.

Only: True. But, let’s be methodical about this; what did you like about “Cinderella and Four Knights”?

Junggugeo Kaenada: Sorry, I lost my head at the thought of all that skinship. I liked that “Cinderella and Four Knights” provided exactly what it promised: a fairy tale. Even when things got serious, I never got the sense that it took itself too seriously.

Only: I did like that they kept the tone light. However difficult things seemed, it never felt like we were heading for anything other than a happy ending for Ha Won and Ji Woon. Especially given how much chemistry they had together.

Junggugeo Kaenada: From the beginning, I noticed that Park So Dam and Jung Il Woo had amazing chemistry, and that is always a big factor in whether I’ll enjoy a Kdrama. They just had a spark every time they fought, or later, when their attraction grew.

Only: I have to admit that at the beginning, I enjoyed Ha Won’s interactions with Hyun Min more. Ahn Jae Hyun was so ridiculous as that character that it was hard to resist. 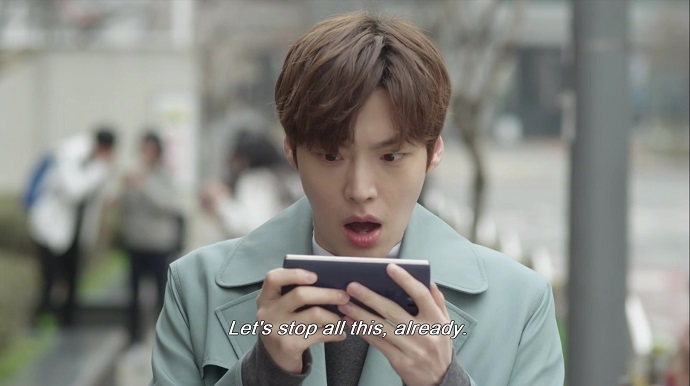 Junggugeo Kaenada: Just as I feel that Jung Il Woo is best at romantic comedies, I think “Cinderella and Four Knights” and “My Love From the Stars” prove that Ahn Jae Hyun should do comedy from now on. He was hilarious, because he was so committed to acting like an idiot.

Only: I laughed so hard at Hyun Min’s ridiculous come-ons, and how he got so used to Ha Won’s beatings that he began to find them attractive. His temper tantrum when he discovered he’d been kidnapped into taking a vacation was classic. Hell, he even made me laugh on that car ride with Hye Ji, who turned out to be a terrible driver, on top of all her other faults. 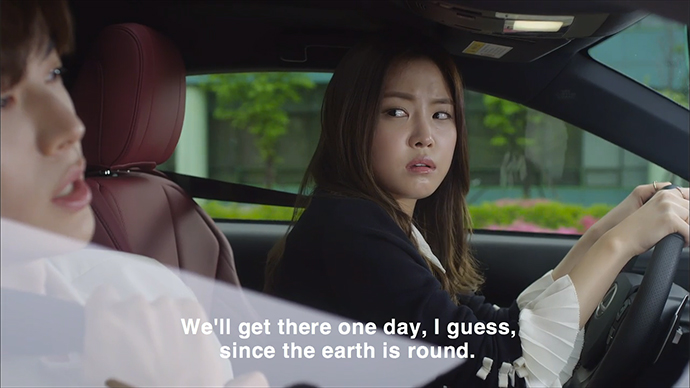 Junggugeo Kaenada: It’s too bad that fun Hyun Min was paired up with killjoy, Hye Ji who existed only to serve as a reminder to Hyun Min of a past trauma and a more somber self. I suppose this is where we transition into what we didn’t like about “Cinderella and Four Knights”.

Only: This is going to sound technical, but I was really bothered by the direction. Characters seemed to stare off into space or just stand around, and almost all the movement was so awkward as to be laughable. The actors’ charm made up for a lot of it, but when I’m noticing the terrible angles instead of how cute Jung Il Woo is, something has gone wrong.

Junggugeo Kaenada: I think the epic first sober kiss between Ha Won and Ji Woon on a hilltop was supposed to be swoon worthy, but it just irritated you.

Only: For one thing, it just seemed like overkill, as if they had to turn it into The Sound of Music. Frankly, a kiss between Ha Won and Ji Woon would have been pretty good on its own without the swooping camera and multiple bad angles.

Junggugeo Kaenada: Speaking of unnecessary additions, poor Seo Woo was a pretty extraneous character. Sure, he was cute and nice, but in the end, it was like he was operating in a vacuum. He pined after Ha Won and wrote her a song, to no effect. He would act helpful, and go unacknowledged. In fact, he was boring until he came in contact with Ja Young whose frantic fangirling brought out the best in him.

Only: Ja Young was such a fun weirdo that it made me sad that Seo Woo didn’t end up with her. It would have made him way more interesting.

But enough about Seo Woo, let’s talk about my favourite knight, Yoon Sung.

Junggugeo Kaenada: I knew when Yoon Sung started cooking for Ha Won and acting chivalrous towards her, he would become your favourite. I must admit that I came late to the Yoon Sung fan club in that I only saw how hot he was in the final episode when he finally relaxed, looking studly in a gi and drinking in a park.

Only: Listen, a man who cooks, looks good in a suit, and puts up with random whims is not to be sneezed at. It doesn’t hurt that he also looks good in a gi. Granted, he had no chemistry whatsoever with Ha Won, but that just leaves him for me.

Junggugeo Kaenada: One final gripe I have is the weakness of the final episode, though I found it more laughable than rage inducing. Ha Won couldn’t get over the fact that she chose money over Ji Woon, so her shared tragedy with him was what finally convinced her that they were fated for each other. Everything came together conveniently, right down to the Cinderella shoes. Except, the heels were from a scam concocted by Hyun Min.

Only: It was starting to feel like Ha Won was coming up with excuses not to be with Ji Woon by the end, and then when the random fate angle popped up, it just felt tacked on. Anyone in their right mind would have taken money to get their father out of jail, so Ha Won acting like she’d committed a crime was ridiculous. I’m not sure why she never just explained herself to Ji Woon.

Junggugeo Kaenada: In the end, Ha Won and Ji Woon came together, and we got to enjoy seeing them act like a real couple with their hands all over each other. That’s a nice change from the rather chaste and anticlimactic way Kdrama couples end up.

Only: It was. Their flirtiness was one of the best parts of “Cinderella and Four Knights”, especially when Jung Il Woo got intense.

Junggugeo Kaenada: Few actors in Kdramaland can match Jung Il Woo’s ability to go from intense to ridiculous, and pull off both. The scene with Ha Won after he spotted her in the movie theatre is a perfect example; he turns up the heat with his gaze then breaks the moment to ask her for money, because he is starving.

Only: There was another amazing scene towards the end where Ha Won fell on his hospital bed, and Ji Woon tried to turn it into sexy time. We could spend the rest of this review recapping those moments.

Junggugeo Kaenada: Or, we can go and rewatch “Flower Boy Ramen Shop”.