Lake Inez is part of the new wave of restaurants and businesses that are taking advantage of the cheaper rent in Gerrard India Bazaar. With its 24 rotating craft beer taps, and its menu of Asian-inspired sharing plates, the restaurant is definitely catering to a non-traditional demographic.

We ordered a bunch of snacks, small and large sharing plates, but the lighting was awful, so two dishes failed to be photogenic enough to be shown.

For someone who usually dislikes sweet meat dishes, I was pleasantly surprised by how much I enjoyed the sweeter taste profile of the Lake Inez menu. Every time I sampled a dish, I was prepared for some jarring element, whether it be salty or sour, to play off the sweet. Yet, it never happened. The flavours were nicely measured, making the entire meal very comfortable. Where the chef chose to create contrast was in the textures of the ingredients.

My only complaint is that it became hard to tell the dishes apart, because the taste profile was so consistent across the menu. So, if you liked the first dish, chances are, you’ll like the next six. In fact, the only time a dish stood out from the rest was the dessert, which still managed to stay within the ‘not too sweet’ and ‘interesting play of textures’ themes.

In the featured photo above is Beef Short Ribs cooked for 48 hours then grilled over Japanese charcoal with Korean kalbi sauce and served with lettuce, mashed kimchi, pickled radish and Ssamjang mayo. The beef was unbelievably soft and moist. It practically melted in the mouth.

Honey Garlic Adobo Wings – Six wingettes fried and tossed in adobo sauce with sesame seeds and chilies. Surprisingly moist for such small wings. I usually dislike honey garlic, but these were delicious. 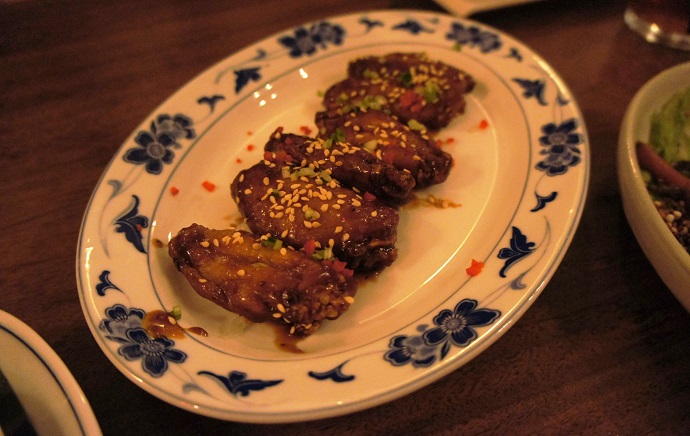 Spicy Charred Brussels Sprouts flavoured with chili jam, oyster sauce, lime, and crispy anchovy. The Brussel sprouts were definitely in there somewhere, but it was covered in a lot of sauce, and that sauce was delicious.

Not pictured:
Miso Cured Carrots – pan roasted with edamame hummous and toasted quinoa furikake. The carrots were cooked perfectly, but the sauce was so plentiful and delicious that we were spooning it into our mouths long after the carrots were consumed.
Housemade Egg Noodles tossed in mushroom black bean sauce, pickled greens, and crispy enoki. Mushrooms figured very prominently, but it was really just mushroom and egg noodle well executed. Kind of simple compared to every other dish.

Finally, dessert! Coconut Sorbet with caramelized bananas, chocolate sauce, pineapple, roasted peanuts and freeze dried durian. Everything complemented one another perfectly, even the durian, probably because it was freeze dried and kept small in size. 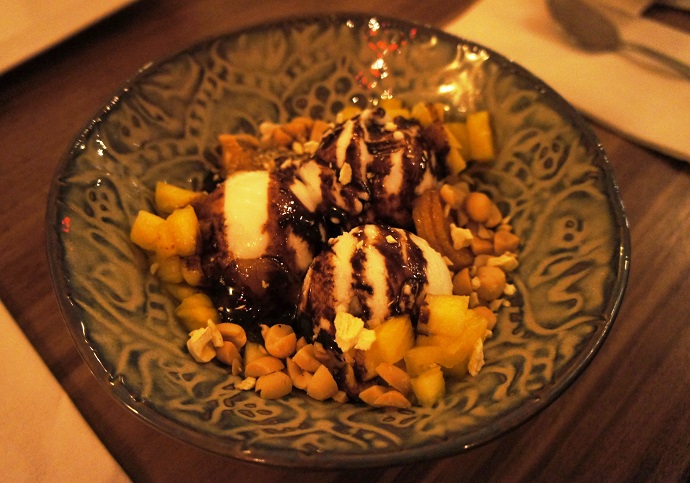