Side dish: Do I really need to explain why you should make cheesy bread? I don’t. Go make this recipe for Cheesy Earthquake Bread from I am a Food Blog.

Super strong woman, Do Bong Soon (Park Bo Young) recognizes the voice of the kidnapper while walking in her neighbourhood, but realizes too late to chase him down. Instead, she spends the day discovering the consequences of her night of drunken debauchery. Her boss, gaming CEO Ahn Min Hyuk (Park Hyung Sik) puts her in a student’s cubicle in his office, but when the video of her drunken exploits gets out, he makes sure it’s taken down.

When police detective In Gook Doo (Ji Soo) discovers that Bong Soon saw the kidnapper, he’s worried, but Bong Soon is only interested in Gook Doo and Min Hyuk fighting over protecting her. That is, until, her friend, Kyung Shim (Park Bo Mi) is attacked by the kidnapper and Bong Soon rescues her. Afterwards, unaware of her super strength, Gook Doo insists that she stay at Min Hyuk’s house for her safety, and escorts her to work that morning. Bong Soon is in a love haze at work, much to Min Hyuk’s disgust.

That night at Min Hyuk’s house, Bong Soon can’t sleep and ends up patrolling the streets in hopes of attracting the kidnapper. She’s interrupted by Min Hyuk who takes her back to his house. Moments later, Gook Doo arrives and insists on staying at the house with the two of them.

Only 만: So, how did you feel about episode 5 of “Strong Woman Do Bong Soon”?

Junggugeo Kaenada 중국어 캐나다: As much as I disliked watching Bong Soon’s friend, Kyung Shim get attacked by the Dobong-dong kidnapper, I am glad it finally became personal for Bong Soon. It seemed like the only way to sober her up and compel her to be proactive about the crimes in her neighbourhood.

Only: She didn’t seem to be taking the threat of the kidnapper that seriously until Kyung Shim was attacked. How did it not occur to her to call the police after she realized the kidnapper had just walked by her?

Junggugeo Kaenada: Yes, the lack of follow up by Bong Soon after the cliffhanger of episode 4 was frustrating. It didn’t help that, shortly thereafter, Min Hyuk infantilized Bong Soon by assigning her a child’s desk in his office. As much as I secretly like that cute desk.

Only: That desk is pretty cute. That said, she does act a lot like a kid. I’m glad she’s finally decided to use her strength for good, but when she saved her friend, she didn’t have the presence of mind to hold on to the kidnapper while she called the cops. She seems to act entirely on instinct.

Junggugeo Kaenada: I think the series has already established that Bong Soon is not the most mature and thoughtful person. But, enough bitching about our disappointment in Bong Soon. How do you feel Min Hyuk fared in this episode? 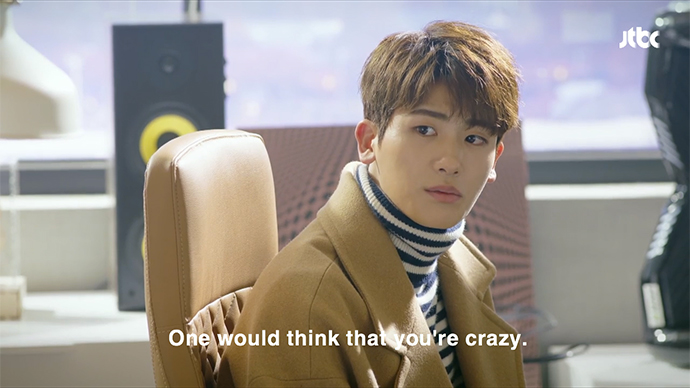 Only: I find his annoyance with Bong Soon’s epic crush on Gook Doo pretty hilarious. As much as I should feel bad for him when Bong Soon turns into a lovestruck idiot, Min Hyuk is just so funny when he’s riled up.

Junggugeo Kaenada: The way he secretly mocked her giddy dance to the security gates of the office building then got an ego boost from throwing them all open at once was a nice touch. But then, Min Hyuk became dreamy with the loving way he looked at Bong Soon when she was so distressed about her strength.

Only: I love the two of them when they start bickering. Five episodes in, and it’s still the best part of the show. Actually, the funniest part this episode was when Min Hyuk and Gook Doo went from fighting over protecting Bong Soon, to trying to get out of it when they saw how much she was enjoying it.

Only: Bong Soon’s mother has to be the most insane character on the show. I like how she’s still a boss even without her superhuman strength, but she’s pretty awful to her family. If my mother had tried to make me sleep with my boss with lingerie and wedding blankets, I think I would take it way worse than Bong Soon did.

Junggugeo Kaenada: I can’t wait to see her go up against that gangster developer, especially when money is at stake. He has 60 thugs at his beck and call. She has eight ajummahs and her poor henpecked husband. It’s a toss up who will triumph.

Only: I wonder if she’ll hit the roof when she realizes that Gook Doo has thrown a monkeywrench into her schemes of seduction for Bong Soon by showing up at Min Hyuk’s house.