Side dish: Bong Soon has soybean paste with soondae, but it probably goes well with anything. Make your own following the recipe for Fermented Soybean Paste by Maangchi.

Bong Soon (Park Bo Young) knocks out the two intruders in Min Hyuk’s (Park Hyung Sik) home, and places them on the blanket provided by her mother. The two thugs end up falling in love with each other thanks to the charm that Bong Soon’s mother had intended for her and Min Hyuk. 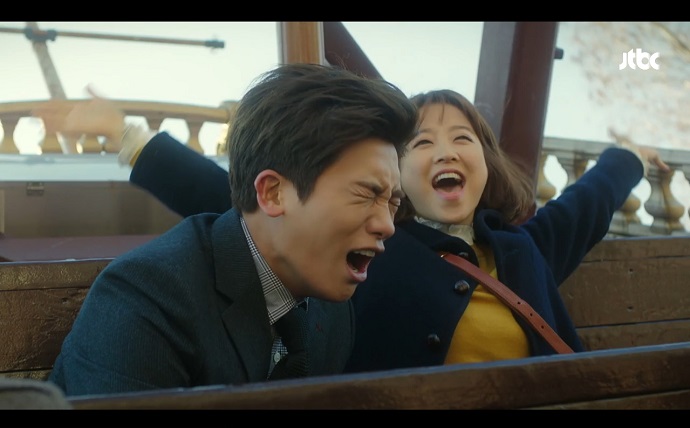 Preoccupied with the havoc that Bong Soon and her grandmother have wrought on his gang, Baek Tak decides to reveal that Min Hyuk’s beloved second eldest brother hired him. Bong Soon takes a devastated Min Hyuk to an amusement park to cheer him up. Afterwards, Min Hyuk reveals how a girl saved him from a bus accident eight years earlier.

Bong Soon goes home to see her visiting grandmother while Min Hyuk confronts his second eldest brother. The next day, Min Hyuk begins training Bong Soon to control her power, and they have a sexually charged moment in the midst of repeat abject failure on her part. 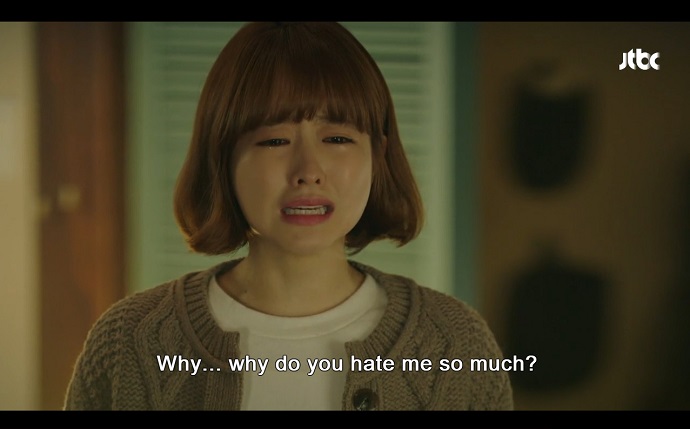 After getting unfairly punished by her mother, Bong Soon breaks down over always coming in second to her brother, Bong Ki (An Woo Yeon). Later, Bong Soon finds Hee Ji (Seol In A) visiting Bong Ki, and she feels compelled to reprimand both of them for acting without regard for Gook Doo’s (Ji Soo) feelings.

The Dobong-dong kidnapper has taken a third victim then attempts to kidnap Kyung Shim from the hospital, but he is stopped by Bong Soon before escaping. Meanwhile, the police get closer to the kidnapper’s source of inspiration after viewing a play called “Bluebeard and Seven Brides”. 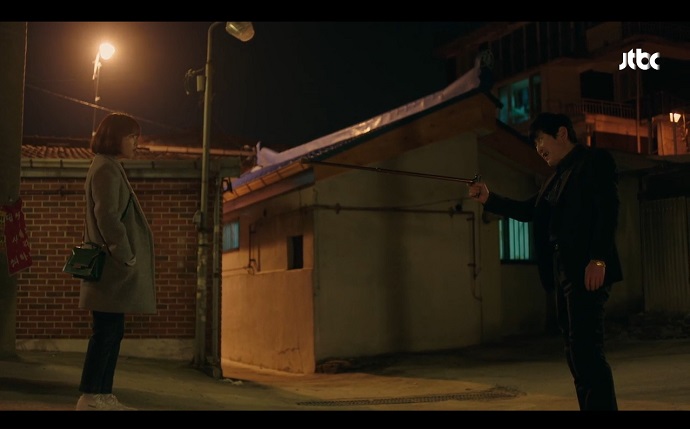 Bong Soon is confronted by one of the gangsters she put in the hospital, before Gook Doo attacks him. Bong Soon forcefully intervenes to save the gangster, and Gook Doo is shocked by her show of strength. Min Hyuk witnesses the entire scene, and appears concerned that Bong Soon has just revealed her power to Gook Doo.

Junggugeo Kaenada 중국어 캐나다: Bong Soon may be making steady progress towards becoming a hero, but it was Min Hyuk’s personal struggles that really took center stage in this episode.

Only 만: It was pretty devastating to watch Min Hyuk realize that his nemesis was actually the only brother who seemed to care about him. Credit goes to Park Hyung Sik’s acting skills; he looked genuinely hurt without overplaying it. 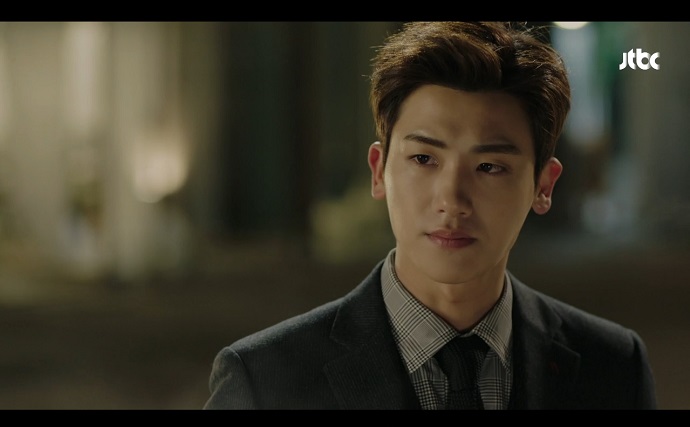 Junggugeo Kaenada: Min Hyuk is showing an amazing amount of maturity, given how he was initially introduced to us. He tells his father that he will deal with the problem, and when he finds out that his beloved brother is the culprit, he forgives him while taking a hard line, and his brother appears cowed. My only issue is that it does not leave Bong Soon with much opportunity to help Min Hyuk grow. Though, I guess she brings cheer to his life as evidenced by the trip to the amusement park.

Only: I enjoyed the amusement park trip, though it felt a bit random in the context of the rest of the episode. Actually, I feel like I’m repeating myself, but this episode was all over the place again. Maybe there’s just too much going on in this show? 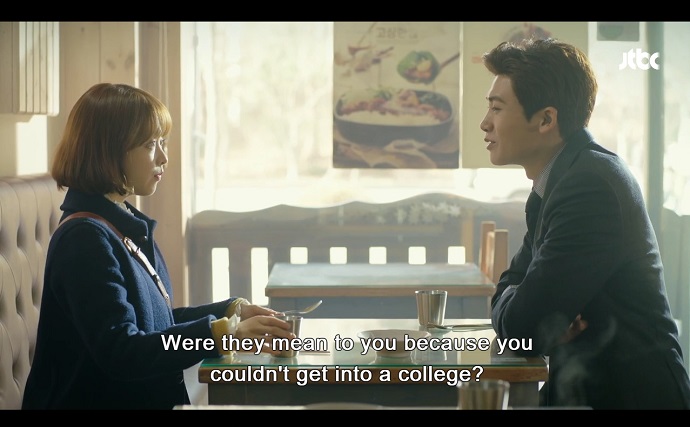 Junggugeo Kaenada: I think you would rather that the writer dispense with the gangsters and the Dobong-dong kidnapper.

Only: I would. Compared to how entertaining Bong Soon and Min Hyuk are together, all that just seems like a lame side story. I felt a lot of sympathy for Baek Tak when he couldn’t stand to look at the guy who keeps getting pee all over himself; I could have done without the gross pee jokes myself.

Junggugeo Kaenada: I can tolerate the Baek Tak story line, because the sad state of his gang is ridiculously entertaining. When his second-in-command proudly tells him that he placed his latest injured cronies in the hospital rooms next door to the ones about to be discharged, for his convenience, I laughed out loud. 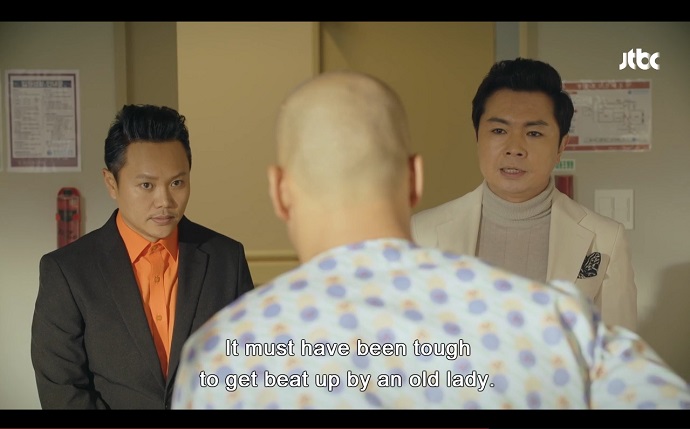 Only: Baek Tak is somehow enjoyable, because he’s such a weirdo. I can’t say the same for the rest of the gangsters. Unfortunately, I also can’t say that I enjoyed Bong Ki and Gook Doo’s girlfriend, Hee Ji, as much as I appreciate Hee Ji’s unusually direct approach.

Junggugeo Kaenada: I am glad that Bong Soon confronted Hee Ji and Bong Ki about their bad behaviour, and they actually looked abashed. Plus, Bong Soon voiced her grievance towards her mother about her mother’s ill treatment of her, though I found that scene overwrought, and discordant with the sentimental moment Bong Soon had with her mother and grandmother earlier. 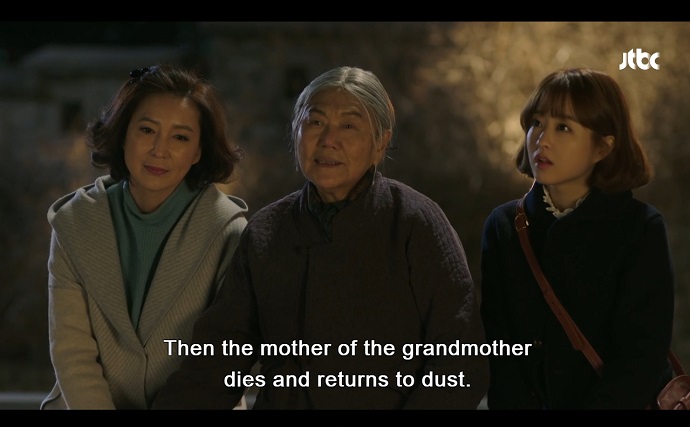 Only: I can’t make heads or tails of whether I’m supposed to find Bong Soon’s mother sympathetic or not. In this episode, she was very sweet with her mom and Bong Soon, but then capped that scene off by pushing Bong Soon to sleep with Min Hyuk so she can capture him as a son-in-law. Maybe I’m meant to believe that she just has Bong Soon’s best interests at heart, but she just comes off greedy.

Junggugeo Kaenada: I also can’t understand what the mother’s schemes are for profiting off the local land development. But, enough about Bong Soon’s mother. Let’s tackle that other story line we’re not crazy about: the kidnapper. I felt satisfaction when that police official bullied the head of Gook Doo’s department. Their incompetence is the worst, because there are a growing number of victims, as a result.

Only: Their investigation skills aren’t that bad; it’s just that they can’t seem to catch the guy whenever they’re actually confronted with him. And in the meantime, we get to watch him kidnap and terrorize more women.

Junggugeo Kaenada: Thankfully, Bong Soon is showing growth in that she actually realized that the kidnapper was not a doctor, and chased after him. It did occur to me that she needs cardio training as I watched her fall behind and lose the kidnapper. 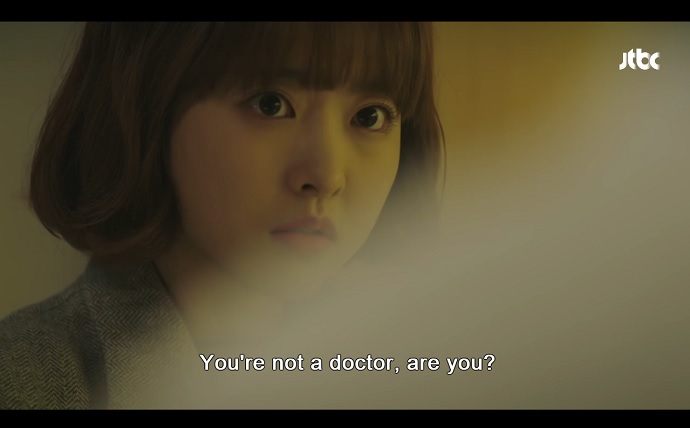 Only: Are her legs not as strong as her arms? From the looks of it, she can climb a rope faster than she can run.

Junggugeo Kaenada: I hope she is going to receive more training, because she needs to be able to run, and to control her powers. Also, it will provide more excuses for skinship between her and Min Hyuk. Their moment on the floor of the octagon was surprisingly intense.

Only: Bong Soon may need to sharpen her observation skills too, given how oblivious she seemed at that moment. Then again, she’s still supposed to be hung up on Gook Doo, who was barely present in this episode. 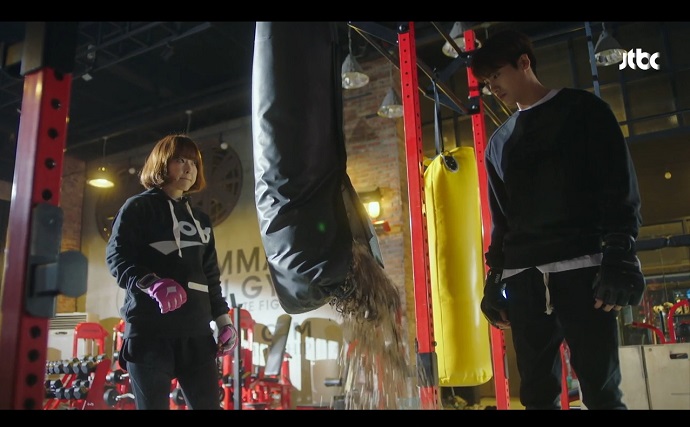